Hacking in a Wind Tunnel 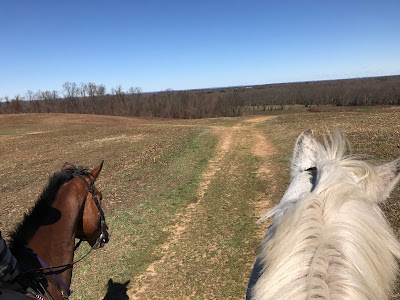 Saturday I picked up Megan and Runkle and we went to a WMA not too far away where there are 6,800 acres of riding. 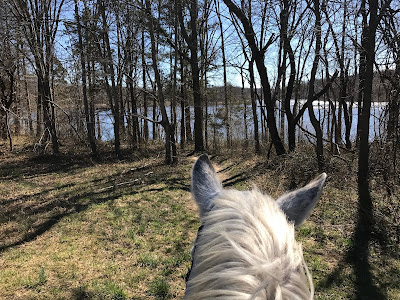 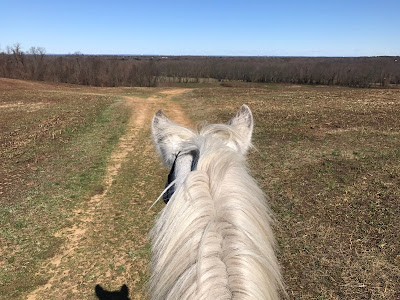 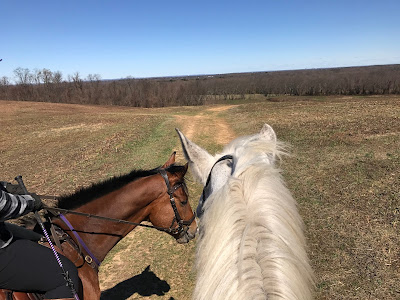 Klein had other plans for our morning.  She hasn't had a fit about loading for a couple months now, I guess it was due because she let me have it this morning.  She is SO random with her loading fits.  We will go months of her basically self loading and then one day, when the moon and stars are aligned and the ambient air temperature is perfect, I have a fire breathing dragon that gets pretty ugly.  On one hand, of course it's annoying because these fits are usually when I have time to be somewhere.  On the other hand, I'm kind of impressed with her ability to stand up for what she believes in I guess.  Either way, she's not winning.  She has never, EVER won that battle.  I'm the undefeated champ when it comes to her loading fits.

I texted Megan to let her know I'd be a little late and not sure just how late.  I had the equivalent of a Marlin on a deep sea fishing line on the end of my lead rope.  I'm serious people, when Klein decides she doesn't feel like loading, she can hop around and have a complete melt down.  It's possible!  Thankfully it is very rare, and I was actually telling Megan that because it is so rare I have to remind myself that she is so good the majority of the time that she is allowed to have a bad loading day.  At one point I even asked her "Why are you acting like we're deep sea fishing right now??" 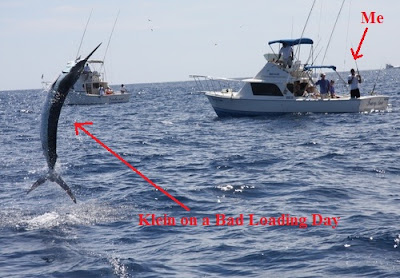 I actually had an idea she might not be super excited about that morning.  When I pull my truck and trailer up she knows that it's most likely her that is going somewhere.  That morning she saw the truck and trailer pull up and she walked to the farthest corner of the pasture.  I promised her she was just going to hang out with her buddy Runkle and go for a nice, long hack.  In all honesty though, I really do think that her problem was that I hadn't fed her yet.  It was still early, so I thought I would feed her on the trailer since she'd be on it for a little while.  I thought that would be better than throwing their hay and then taking her off of it if she wasn't done.  Of course I'd put the left overs in the trailer if I did that, but she would still realize I just took her away from hay where Mochi and Wes still have some.  My plan was to feed her on the trailer, then throw Mochi and Wes their hay.  When this kind of stuff happens I always tell her, "You know what?  I do shit I don't feel like doing all the time, you're going to have to take one for the team this morning girl."

Remember I don't have an option for help right now either, so I was prepared to just wait her out like usual. She was not going to win.  We were going to the WMA and I didn't care what time we got there.  We were going.  She would put a hoof on the ramp and that was it.  Then sometimes she would stop 20ft from the ramp and not want to move.  This is her typical melt down.  Lunging her by the trailer doesn't work either, been there a long time ago and tried it.  The only answer is to be repetitive with her and continue to turn her around and walk right back to the ramp.  I tried something different this time though.  I put her bridle on her.  It worked and we were out of there in two minutes.  My undefeated streak continues.

We picked up Megan and Runkle and headed out.  Luckily they are not only close but in the direction we were going anyway.  Klein's circus routine delayed us about 50 minutes.  Thankfully on these days Klein also is immediately over it as soon as she is on the trailer.  She never brings her attitude with her.  She never gives me that kind of attitude about anything under saddle too, thankfully.  So she can act crazy but it doesn't have any affect on the ride. 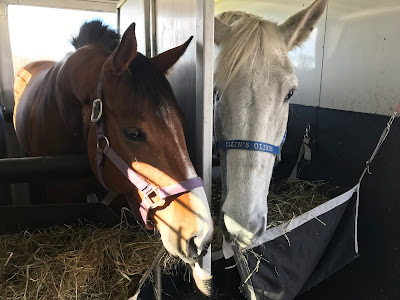 We had a great time!  Klein was great, Runkle was great and aside from feeling like we were caught in a wind tunnel most of the ride, it was nice weather.  This place is awesome because there are miles and miles of trails and there are big hills so even if you go for a long, slow hack, it's great for the horses because of the terrain there.  Or if you want to do some hill sprints, it is perfect to do them and cool out with a scenic hack.  I love this place. 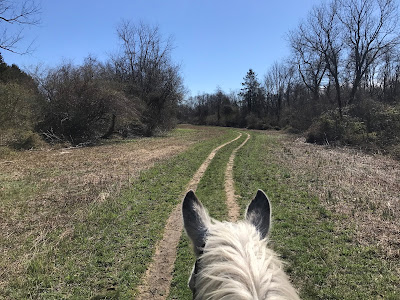 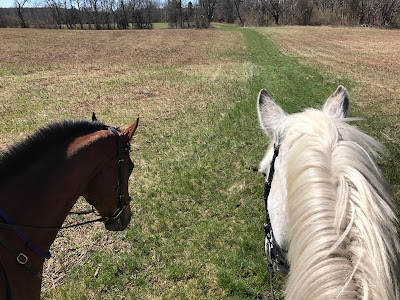 Happy pones.
Posted by The Jumping Percheron at 8:48 AM