First Show of the Year, Complete With Prelim CT 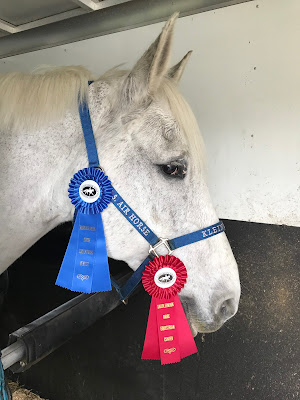 Last Saturday we had our first show of the year.  It was a local CT.  I entered Klein in the Training and Preliminary CT.  I have wanted to take her in a Prelim CT for a long time now and for some reason I just haven't.  There is no good reason I haven't.  We've been schooling up to 3'9" for a while now.  Not regularly of course because there is no need for that, but I know she can do it no problem.  We have ridden Prelim A at a dressage show, it's easy.  It is just a goal I had for us to do some CTs at Prelim since a three phase will never happen at Prelim for her, Training is her max.  Eventually I realized that we haven't accomplished that goal by accident honestly.

We had not been to this barn before.  Dressage was in an indoor, a very nice indoor.  Stadium was out on their xc course.  The indoor, while very nice, was a bit dark with a huge glass wall right above the judge where their viewing area is.  Klein for once in her life actually was a little looky in there.  I'm not sure if it was the reflections on the big glass wall or what.  Normally she doesn't care about things like that but something in there caught her eye.  So I had to put a little more leg on to keep her going since she was a little distracted.  She wasn't bad by any means.  She was listening for sure, she was just a little hesitant I guess would be the best way to describe it. 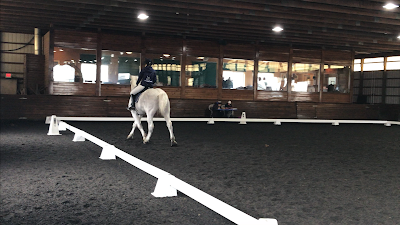 Here you can see the glass wall, this was the first leg yield in Prelim A. 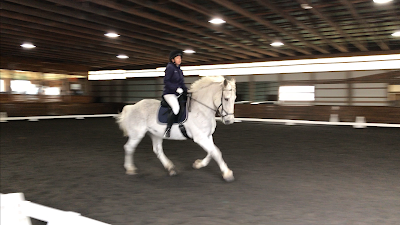 Even with the new iPhone 7, low light videos still suck.  I give up. 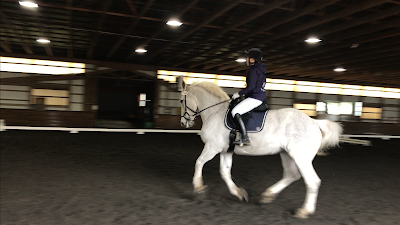 She warmed up great, I would have liked just a bit more from her lengthening and I did add something different into our warm up for that while we were waiting to go back in for our second test.  My main concern was to just ride the tests as accurately as possible with what she was giving me that day.  Mission accomplished.

We rode Training A first and with that I would say that our lengthenings lacked, and so did our 20m circle where she needed to stretch down.  She was a bit too distracted to be consistent with her stretching on that.  For Prelim A I would say we lacked a bit of energy in our first turn off the center line and through our 10m circles.  We also weren't as straight as we could have been in our final turn up the center line.  For both tests her halt wasn't perfectly square like it is 99% of the time in our tests at shows, but I really can't complain because those are very minor things that can be instantly fixed with a change in venue. 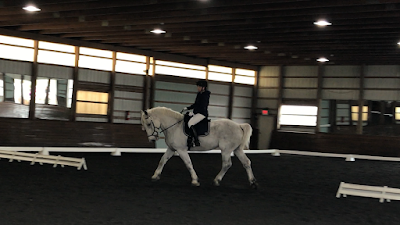 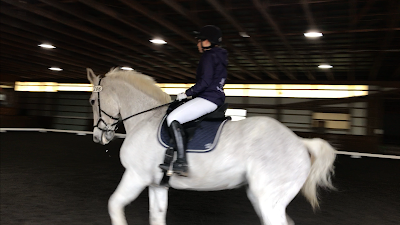 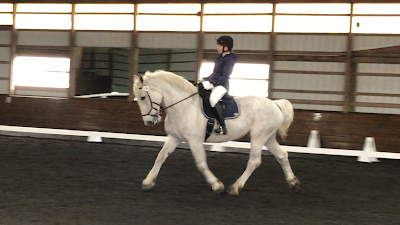 She is being slightly dramatic here, I was not intending for her to get behind the vertical like that. 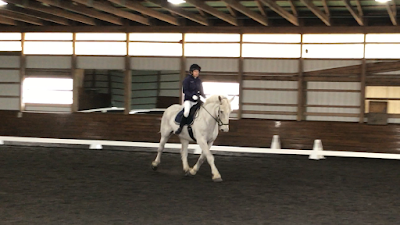 
After our Prelim test I went straight to my trailer to change tack.  I didn't have much time to get to the stadium warm up.  I had already walked my course and knew where we were going.  Thankfully Klein never needs much of a warm up for stadium.  Her usual is get a good canter, some good transitions and clear half halts so I know she's listening, jump a vertical and an oxer each way and we're good to go.  Then we usually go wait ring side and Klein takes a nap.  True to form, she stood there like a statue, dead to the world while the other rounds went and the course was raised.  People always comment on how calm she is standing at the ring.  She's always been like that.  It's her zen, she knows what she's doing, she knows why we are there, and she will bring it when we're ready to come around to #1.  So, I don't mess with that, at all.

Now, because this course was surrounded by xc jumps, they immediately had Klein's attention.  She cracks me up.  She LOVES the sight of xc jumps.  Every single time, no matter where we are.  As soon as she sees them, her ears perk straight up because she realizes she's headed to the playground.  As we are coming around to the first fence in our Training round she was trying to pull me to the left toward a xc fence.  I told her "not today, you need to be looking at these stadium jumps, but I promise we will come back SOON so you can tear this place up!"  We were a bit sticky to 1 and 4.  1 for no reason other than my own incompetence of not putting my leg on when I should have and 4 because there was a nice looking turkey feeder looking xc jump next to it.  After 4 though I was like ok, stop playin' we have to go.  The rest of the round was picture perfect and she didn't touch a thing even with chipping in on 1 and 4.  Fences 6 and 7 were almost on an angle to eachother so we took them on an angle and she nailed it.  I wasn't planning to jump that on an angle when I walked it but when we came around to it, it was the easiest way and I knew it wouldn't be an issue. 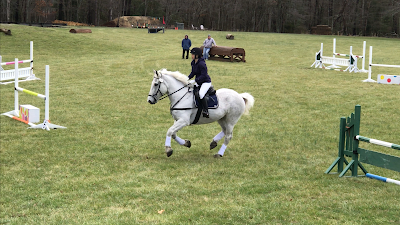 See that jump the people are leaning on in the background?  When we came around there to go to the first fence she was ALL about that jump.

The Prelim round, there must have been something off with my approach to 1 because we took a rail at 1 on the Prelim round but the rest of the round was picture perfect and she didn't touch a thing.  One noticeable thing about both rounds though, her canter was unbelievable.  Hands down the best canter we've jumped out of, no question about it.  Coming around to 1 on the Prelim round I felt her come REALLY through in her back and though "O...M...G...  Get excited because this is about to be GOOD."  I'm super proud of her.  These were two of our best stadium rounds to date.  They were the most powerful, confident, and accurate we have ridden and I know that is a direct result of my jumping lessons here.  I go to my jump lessons and we IMPROVE.  We aren't stuck floundering around in a comfort zone doing the same thing every lesson, we make noticeable progress.  Then, we put that progress to work. 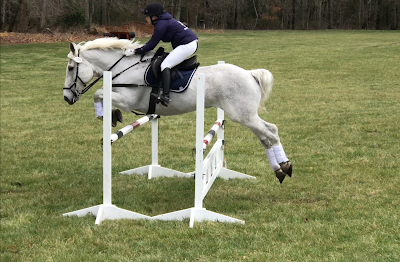 
Where did we end up?  After I got Klein taken care of and loaded I went to the office.  We ended up scoring a 36.19 on Training A and a 37 on Prelim A.  Normally, those scores would mortify me because it is rare I see anything that high these days with Klein.  However, I looked at everyone else's and it was across the board.  Everybody was in in the 30's, some were the 40's.  Out of the CT riders, no one was in the 20's.  Last time we rode Prelim A we scored a 25 or 26, something around there.  Of course I know that won't happen at every show, I just felt like, yeah she wasn't as good as she could have been, but she was by no means bad.  What I felt we could have been better on in the test was accurately reflected in the marks too so that made me validated that what I was feeling, is what the judge was seeing as well.  We were 2nd in the Training with less than two points separating us from 1st and we were 1st in the Prelim.

We had a great time, and we will definitely show there again.  I am also keeping my promise to Klein and taking her back to school xc soon too!
Posted by The Jumping Percheron at 2:56 PM