First, please enjoy Mochi trying to steal Wes' dinner.  She finishes hers first, obviously because she gets a easy-keeping-pony-appropriate amount, and Wes has about three times more than she does.  Klein also is still eating her dinner but Mochs' knows for a fact that Klein won't put up with this silliness.  Well, if you catch her on a good day she might tolerate if for a few minutes but good luck guessing which day that is going to be.  She knows Wes will just ignore her.  Her adorable little speckled nose pony charm doesn't work on him.  But she gives it her best effort.


Some people have said Wes needs a bigger feed bucket.  No, he doesn't.  His head takes up this one to the point where a little pony nose can't fit in there with his nose.  Of course, this week, I learned that Moch has figured out how to grab onto Wes' feed bucket, pick it up, and throw it on the ground.  This way some spills and she gets that little bit while Wes acts like nothing happens and continues to eat out of it from the ground.  *sigh*  That has been remedied.  I could bring them in to feed where they couldn't mess with each other, but this is a minor issue.  If ponies were really fighting it would be different.

Last weekend the Other Half and I brought an extra couple guns to the barn to shoot after I rode.  We are lucky that our barn is 45 acres and surrounded by 1,000 acres of wooded area.  This is why we can shoot on the property.  First, let me put a disclaimer out there...the way the barn is cross fenced, there is no possible way any horse could have gotten in the pasture where we were firing.  We actually were shooting in our pasture but prior to firing, we went and put our three in a pasture in the exact opposite direction while we were shooting.  There is no way in hell we'd be shooting with any horse in the same pasture or with any chance one could come anywhere near where we were firing.  Also, we picked up every single piece of brass when we were done to ensure no pony feet stepped on any.

Here's what they did when we were firing.  This video is with the Other Half shooting the Tavor Bullpup.  It shoots 5.56.


No one cares.  I brought my AK too, they didn't care about that either, and that's 7.62.  The Other Half actually brought the 30-30 Marlin a couple weeks ago and I had him fire it while I rode Mochi within 50 feet of him just to see what she would do.  The first time he fired she jumped a little.  Every time after that she either did nothing or barely flinched like a fly touched her.  I like to know what they would do in certain situations, and sometimes, there is only one way to find out.  I know Mochs well enough to know that I'd be fine riding when he fired the first shot.  Klein has even less of a reaction while riding within close proximity to gun fire.  None of them flip out or act like psychos. 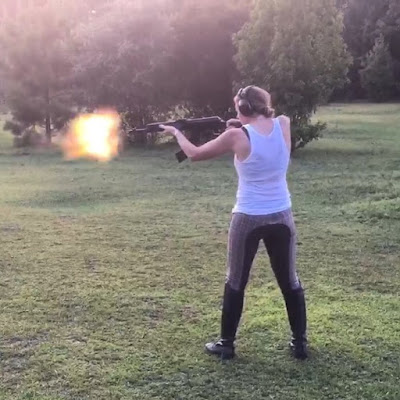 I love my AK.
Posted by The Jumping Percheron at 12:53 PM