I didn't realize it has been almost two weeks since I've posted.  I have been super busy finishing up one class and starting a new one the day after.  This past week I have been sick, and that was no fun.  I ended up being out of work for two days and having to go to the clinic.  I had a sinus infection so bad my teeth even hurt from all of the pressure.

Finally after I started to be able to breathe and not feel so lethargic, Klein to the rescue.  We went for a nice hack, because what better medicine than a ride on your Heart Horse? 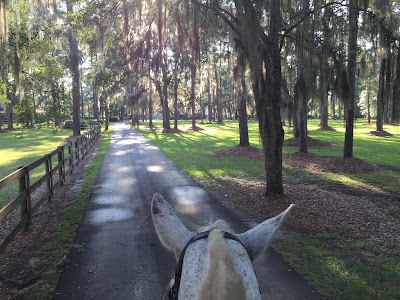 Klein turned 11 last Thursday.  It seems like yesterday I was picking up my coming three year old, barely halter broke, Klein filly at the quarantine station in Hawaii.  Below is a picture of her first day with me in Hawaii.  We had known each other for about three hours when this picture was taken. 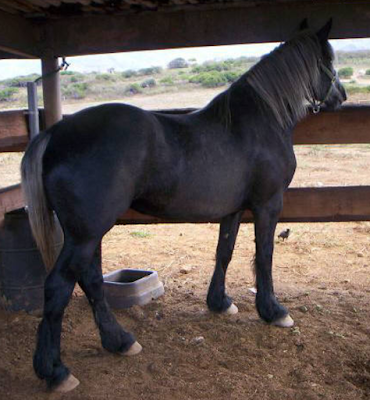 Baby Klein.  I don't know who I'd be or where I'd be without her.


My worst day last week was on her birthday, so we celebrated yesterday with beer for everyone!  The ponies also had beer on Memorial Day. 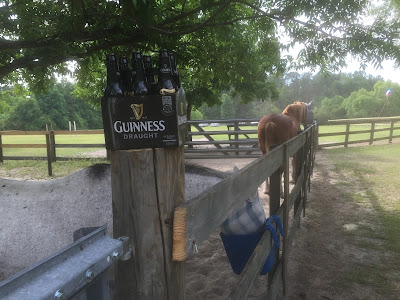 They killed a six pack of Guinness on Memorial Day.

I introduced Mochs to a Chambon.  She is really comfortable in it, hopefully it helps her find her balance a little more while working on the lunge line.  I have to very careful with her on the lunge line because if I just let her go she will just flail about and not get anywhere close to using herself properly, because she is still learning exactly what that's all about. 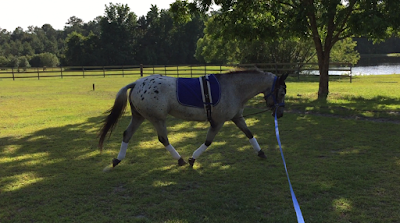 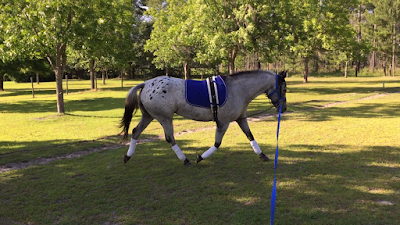 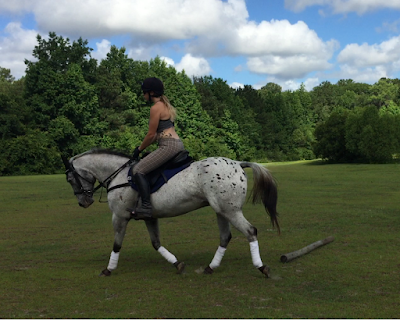 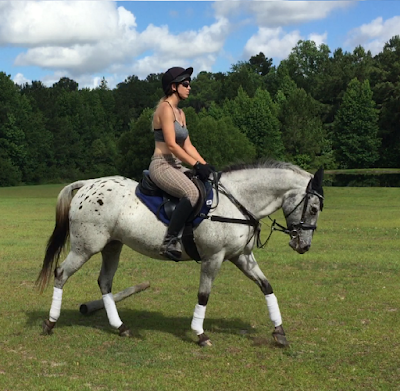 Relaxing at the walk more. 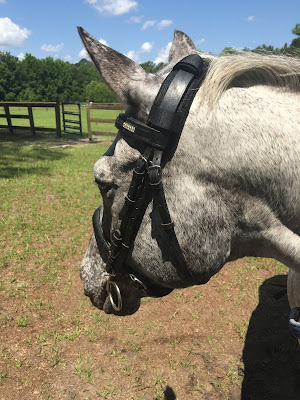 Mochs got a Back on Track poll pad after Monica's rave reviews.  The jury is still out on it.  I just got it and only lunged her in it today, I'll ride her with it tomorrow.  She was great, but she usually is on the lunge line.  No issues there. 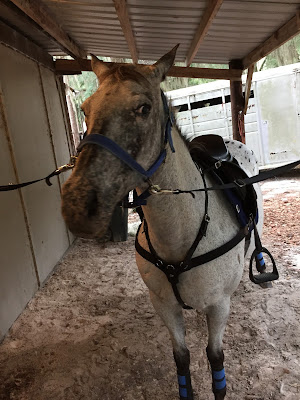 And giving me the eeeeeeeeeevil pony eye for taking too long to get her granola bar after a ride.

Oh speaking of eeeeeevil pony things.  Mochi went completely OG yesterday.  The geldings that share the fence line with our three were a little too close for Wes' liking yesterday.  He doesn't approve of them looking at his mares and he will walk the fence line and just kind of be on patrol when they are close.  Klein was getting her feet done so Moch and Wes were in the pasture.  Wes went to the gate where the other geldings had come up and they squealed at eachother, that's about all the ever happens.  Moch saw what was going on and came in for back up.  Out of NOWHERE she REARS UP and strikes one of the geldings IN THE FACE over the gate!!!!  I have NEVER seen her do something like that!!!  Thankfully no one was hurt.  She needs her own Thug Life video.  If you haven't watched any of the Animal Thug Life videos, go...now.

Klein watched the whole thing from a distance.  And speaking of pedicures, here's a Klein hoof.  In case any one wonders what a pretty much perfect barefoot horse's feet look like: 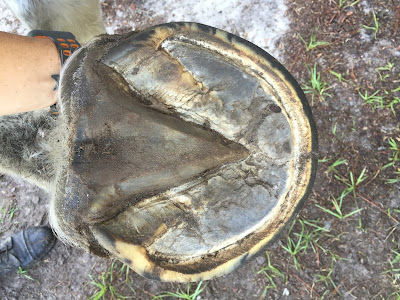 Never been shod a day in her life.

The Handsome is looking exceedingly handsome this summer with his super shine. 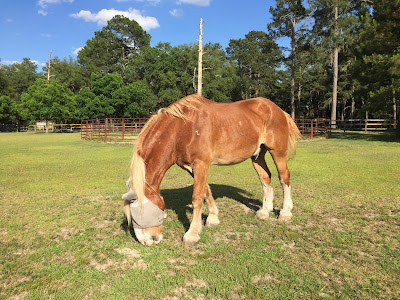 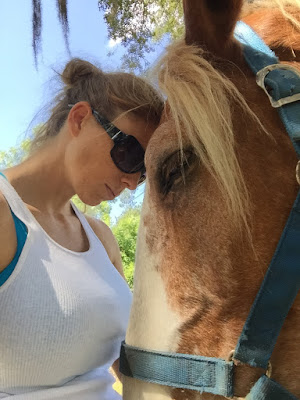 Here he is yesterday.  We cuddled while he got his feet done.

I had to give him some bute Friday evening and Saturday morning to get him more comfortable for his hind end.  He is stiff in his hind end.  I am about to try SmartFlex Senior for him.  MSM did nothing.  If SmartFlex Senior doesn't help, it might be time for hock injections.  I have talked with our vet and she suggested we try everything before injections.  The Other Half was there for his trim yesterday to help with his hind feet.  Our trimmer is super patient and understanding with Wes, aka priceless.  He just has trouble going back onto the stand, bringing his hind feet forward is no problem.  The bute in the p.m. and a.m. did the trick this time too. 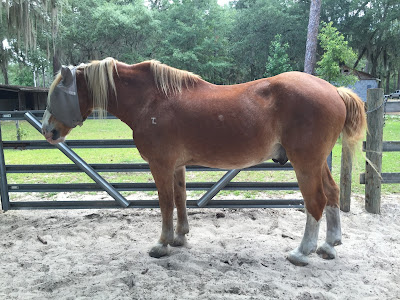 I clipped his feather again.  I like the clean legs look! 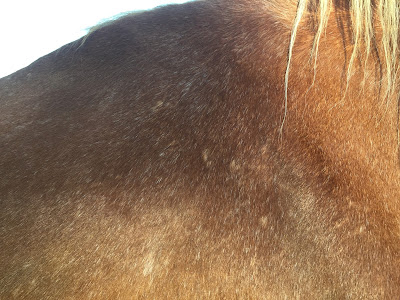 For reference, I'm 5'7" and here is a pic I took at eye level standing next to Wes.

The Beast is back in commission (and driving soooo smooth with that new transfer case)!!  Even two weeks without it sucks because you know you can't just hook up the trailer whenever you want and go wherever you want.  My horse freedom has been restored! 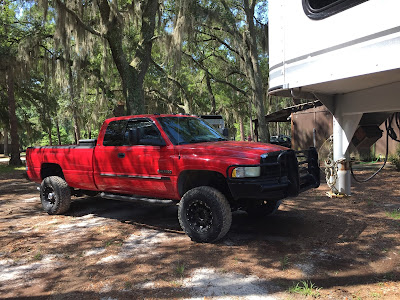 And here is Izzy, and her BFF the Other Half.  She really is a great dog.  She needs a home too...she's up for adoption...  She makes us like dogs, and that's saying a lot.  She's only one year old too.  *Sigh*  She keeps growing on us...  She just LOVES the Other Half, not that I can blame her.  I totally get it. 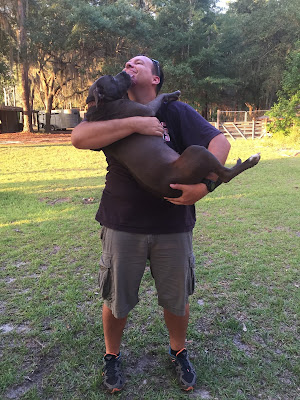 Oh and horsey history was made yesterday.  The only way you wouldn't know that is if you live in a cave or an underground bomb shelter somewhere.  The Other Half and I watched the race, as much as I don't like the racing industry, it was very cool to see history made, live.  Unreal run!  Still doesn't make me want a TB though.
Posted by The Jumping Percheron at 10:22 PM