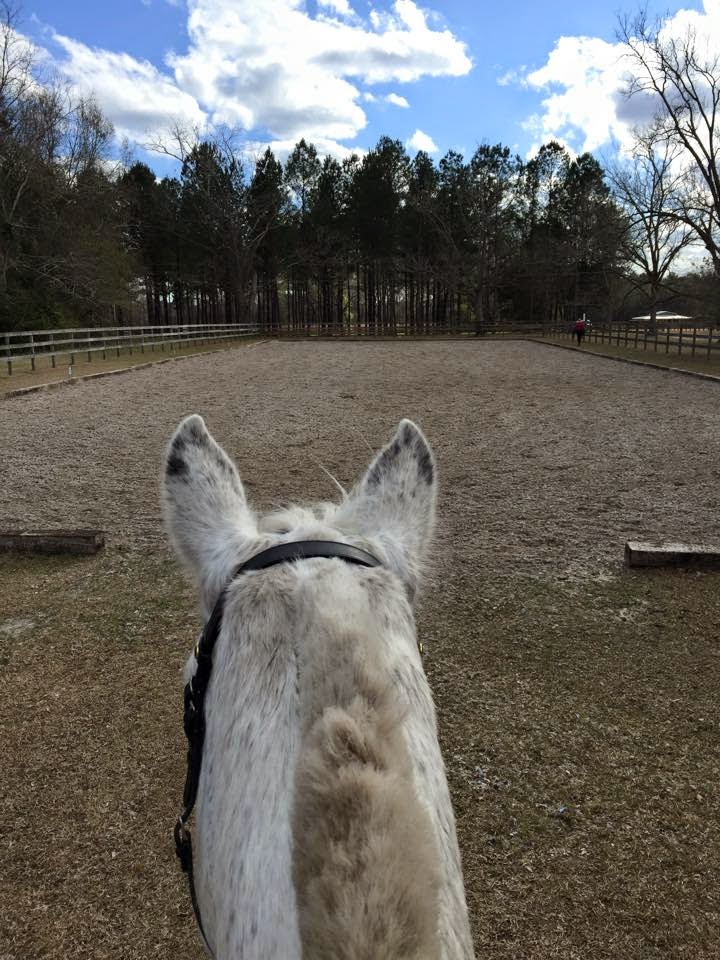 Klein and I had a dressage lesson last Sunday.  We have been working hard on improving our dressage skills lately.  Recently I realized that we have just kind of been "existing" and we really need to start learning and progressing again.

First, our instructor got this amazing new Martins footing since our last lesson and it was like riding on clouds. There was no variance in it at all.  It was so nice and even and, well, amazing.

While we were warming up she had me work on really encouraging a low, deep stretch from Klein.  I had Klein almost touching her nose to the ground.  After a good stretchy warm up we started working on a quality working trot with me stretching up and making sure my shoulders stay where they should.

From there we worked on our leg yields.  She reminded me that I can leg yield all over the arena if I want.  It doesn't just have to be on one diagonal line.  We would go to the quarter line, back to the center line, straight for a couple steps then over to the other quarter line.  She noticed that once Klein starts executing a movement she sometimes get set in it.  I need to keep the confusion up and constantly change things to get her attention just a little more.  She's so right too.  Klein will learn patterns incredibly fast.  She will begin to think she knows where we are going or what the next movement will be, so I have always had to switch things up on her.

We worked on a collected canter.  Klein did well with that.  She really gave me a great effort for our canter work.  That was the nicest canter I've ever got out of her.  My instructor reminded to apply half halts frequently.  She also had me counter flex her on a 20m circle at the canter.  That helped straighten her.  She reminded me to think of riding a haunches which also helped our bend.  It has been a challenge for me to keep Klein's shoulders where they should be but finally, we are starting to achieve some nice, proper bend.

Interestingly enough, just last night I read an article about the USEA ICP Symposium with Chris Bartle.  Counter flexion played a big part in it:

"Because many horses needed more connection with the outside rein, he sent the riders into the corners with outside flexion and inside leg.  The end result, as explained in later groups while working on lateral movements, was that the horse shows proper bend, but this is achieved after much attention to submission and connection with the outside rein."

"Additionally, Chris spoke of taking the horse’s head to the outside to control speed (always in conjunction with the inside leg) to produce straightness before the jump."

We worked on 10m circles at the trot and counter flexing her in those circles.  That was another way to switch things up on her.  It was a reminder to her that I can put her neck where I want it.  That also helped to straighten her.  Our 10m circles were to help create energy to be released for lengthenings.  We FINALLY have some suspension that shows a difference in our lengthenings!  I was 99% sure I discovered that in one of our recent dressage rides.  I rode a shoulder-in down the short side to create the energy to let out on the lengthening.  That was what clicked for us and I FINALLY felt the suspension that is supposed to be there.  I am always hesitant though when we learn new things at home.  I always am a little cautious to really believe I felt what I thought I felt...until our instructor validates that.  She's a DQ, and if it's not there, she will tell me straight up that we don't have it.  I mean, straight up, as in previous lessons I have asked "Was that it??" about a certain movement and she'll say "Uh..NO."  Well, she saw the suspension I felt for the lengthening.  It's there.  YES.  We can only build on this and get better from here.

Lengthenings have been a thorn in our side.  We were kind of floundering on them.  I knew they were in there, but everyone learns differently and we just hadn't figured out what clicked for us yet.  It was the shoulder-in down the short side, and then we discovered an alternate way in this last lesson, the 10m circle to a lengthening.

The collection in our canter that we were able to achieve during this lesson is also what we needed to be able to create the energy necessary to show a difference in a canter lengthening.  That took A LOT of leg, but now I know what's required.

Something else we worked on, serpentines.  I had been incorrectly riding serpentines.  Our instructor broke it down to the actual geometry of them, as in math.  She identified exact spots and had me subtracting meters to get to the precise point where we needed to change our bend.  We ride them correctly now!  Another SUPER helpful thing to change the bend in a serpentine, leg yield into the new bend.

I am really happy with how our lesson went.  The last two dressage lessons we have had have really impacted our dressage in a positive manner.  We are becoming more correct so that we can begin to progress.  Second level, here we come. 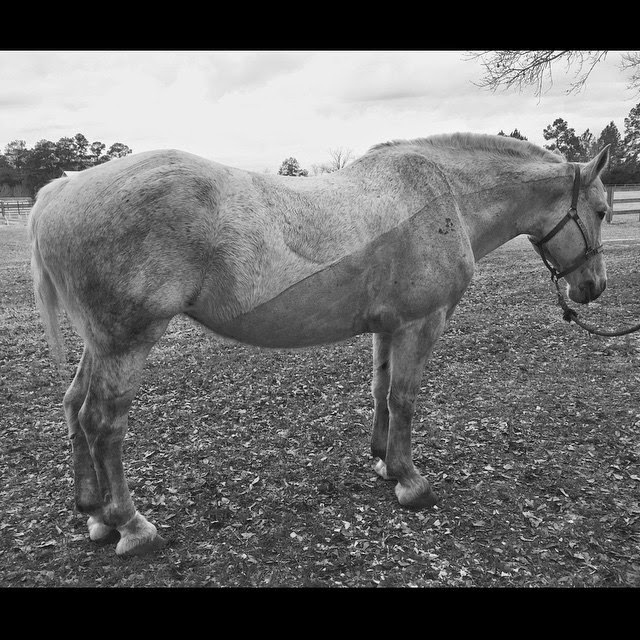 Pony nap time after our lesson.
Posted by The Jumping Percheron at 9:11 PM