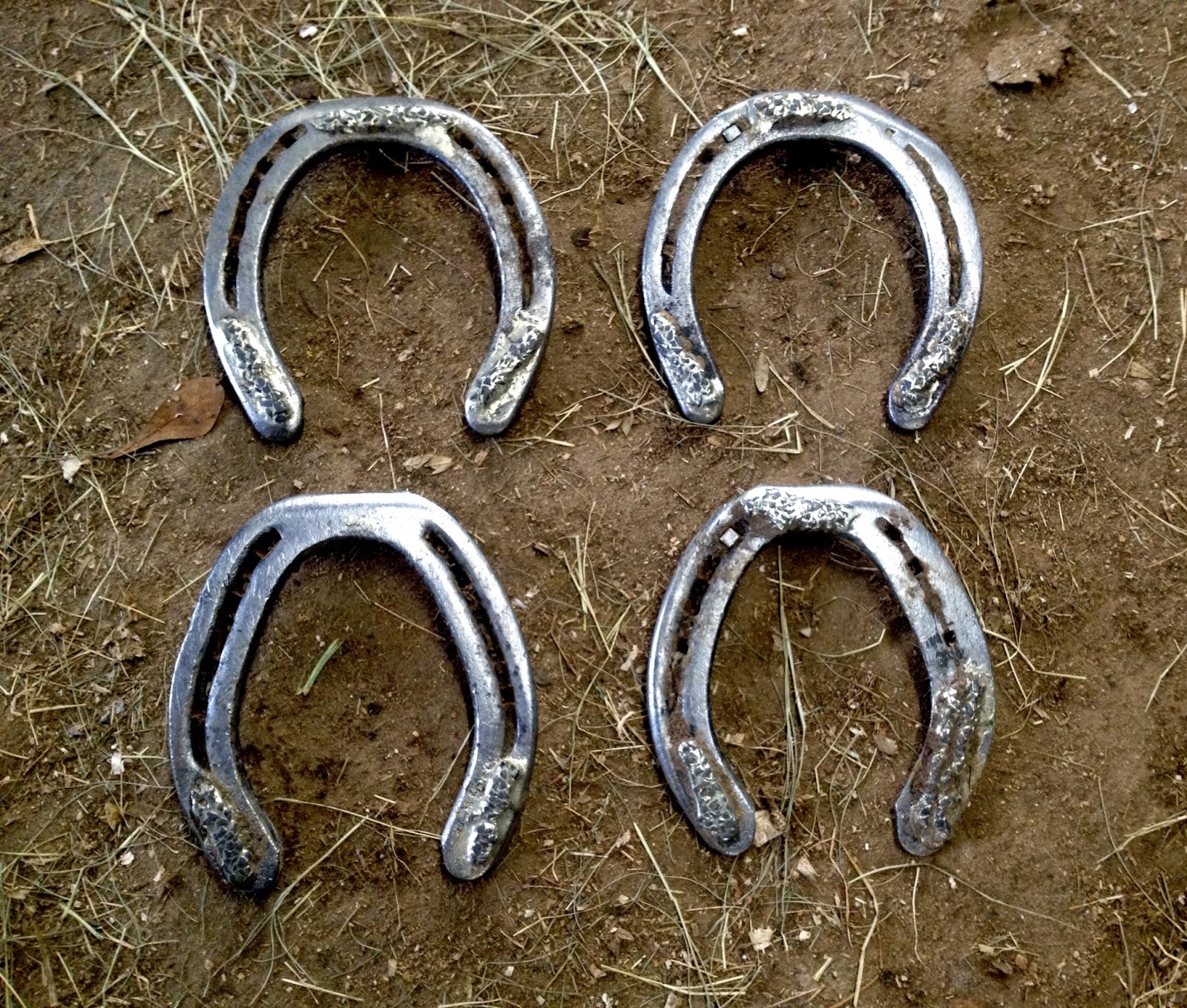 In another milestone for Wes, yesterday marked one year to the day that his shoes were pulled.  He had been shod all the way around for nine years straight and most of his life before that.  Someone told me that they have "owned horses for 30 years" and there was no way he could go barefoot.  Ha.

Yes, I get it, there ARE some horses where all else fails and shoes really are necessary.  Though our three go barefoot with zero issues (Klein has never been shod in her life), I am not one of those people that thinks others are wrong or uneducated for shoeing their horses.  Wes' shoes were necessary for his job.  He was shod with shoes that had borium for traction.  But, in retirement, there really is no reason he needs shoes, unless a medical condition warranted them.


Wes did have a good farrier in Salt Lake.  His feet were no hack job, but they were not correct either.  He needed individualized attention, but he was on a schedule with 25+ other working horses.  So flair was trimmed, shoes were reset, and out the door he went with the next horse walking in.
One, the back left was severely under run. Two, he had a horrendous amount of thrush (not his previous farrier's fault).  Three, his feet were crumbly like feta cheese and his frogs were flimsy and thin.  When our DAEP made her cuts to them it was like slicing through roast beef (best comparison I can think of). 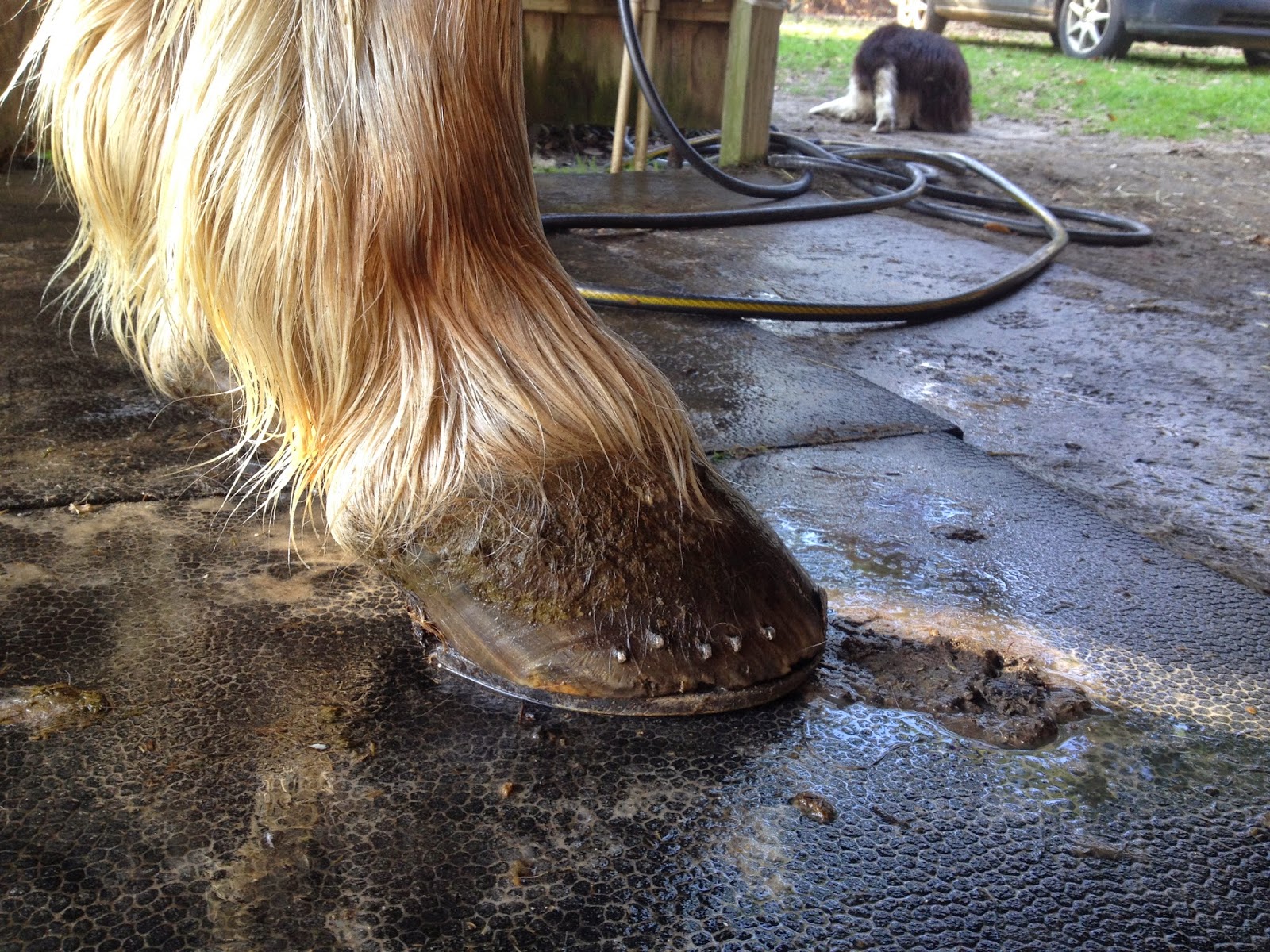 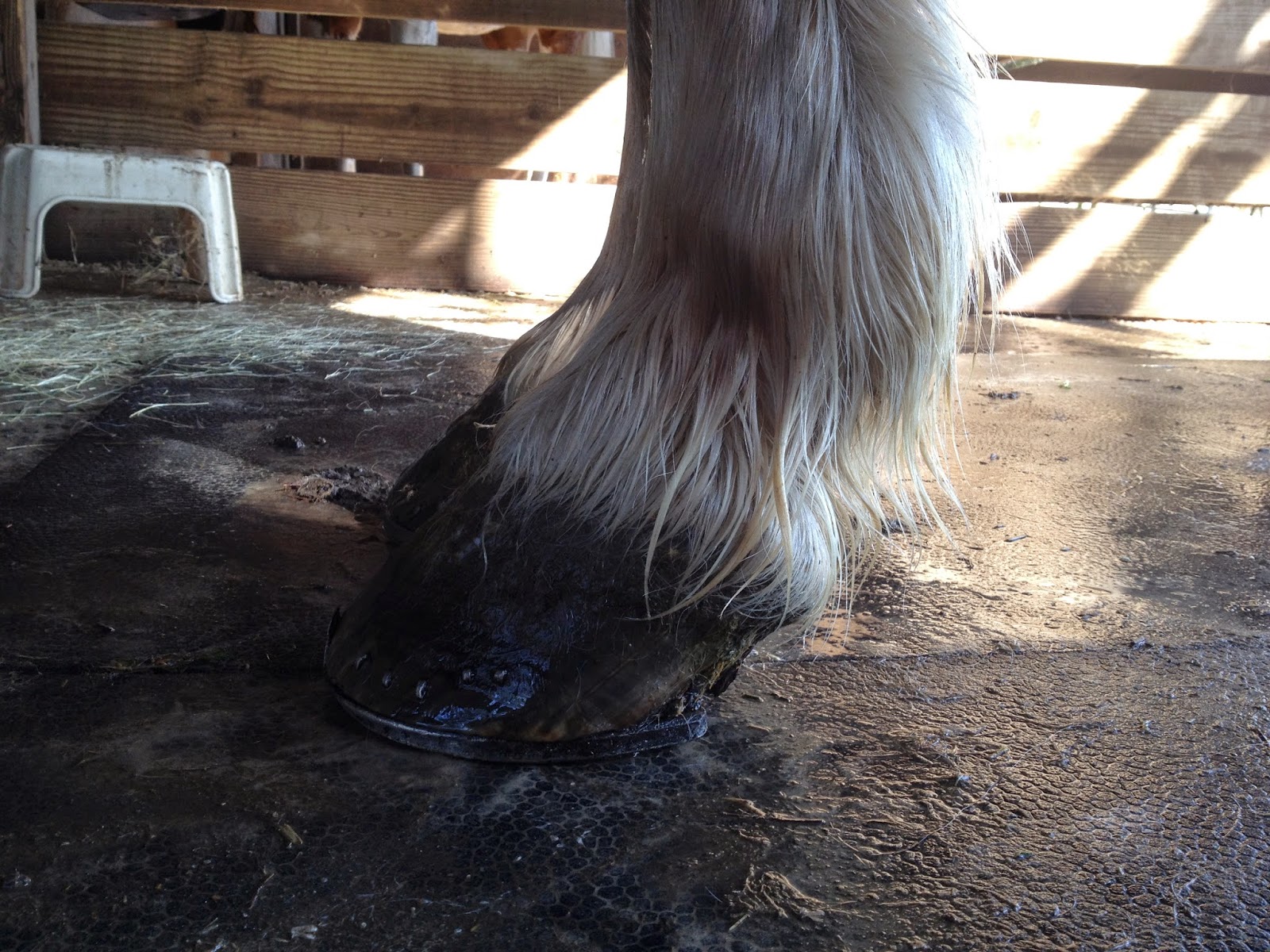 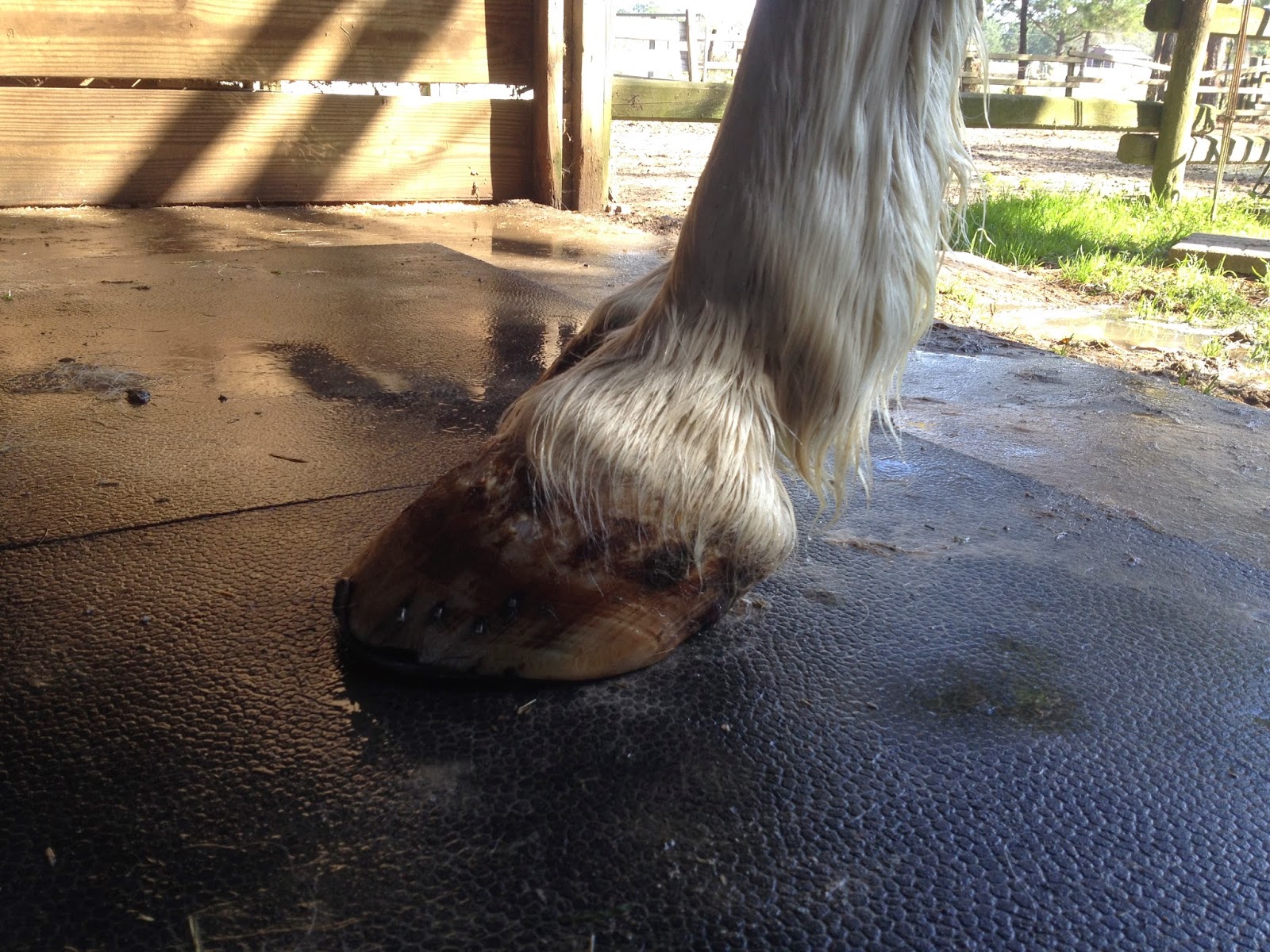 The worst one.  Just look at that thing.  Look at his poor leg.  The loading on that leg is ridiculous. 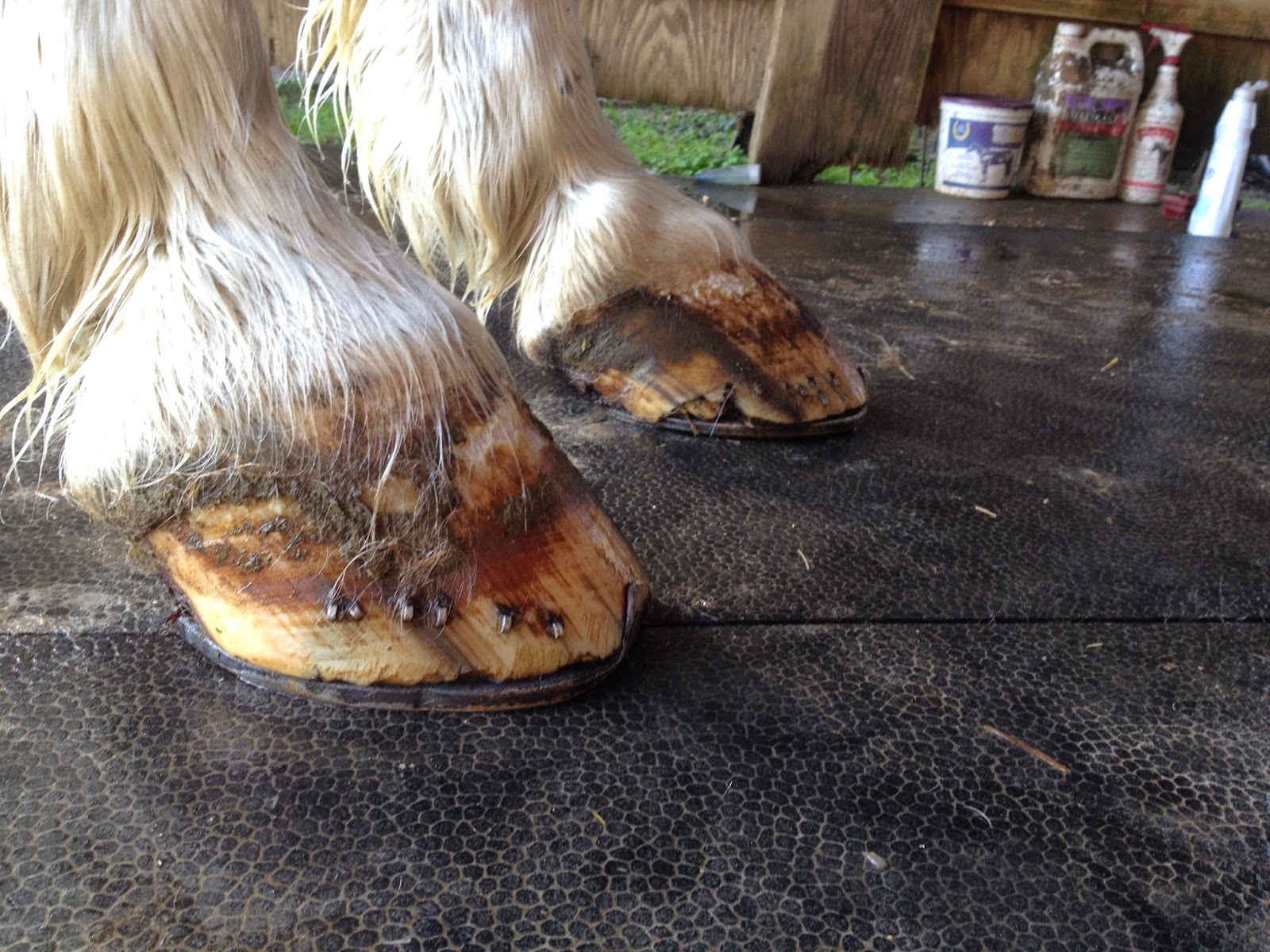 Again you can see just how nasty that back left was.  You can also see the large formation of ringbone on the back left.  All those years of miles and miles of walking on pavement took a toll on him and that foot being trimmed like that with no relief didn't do him any favors. 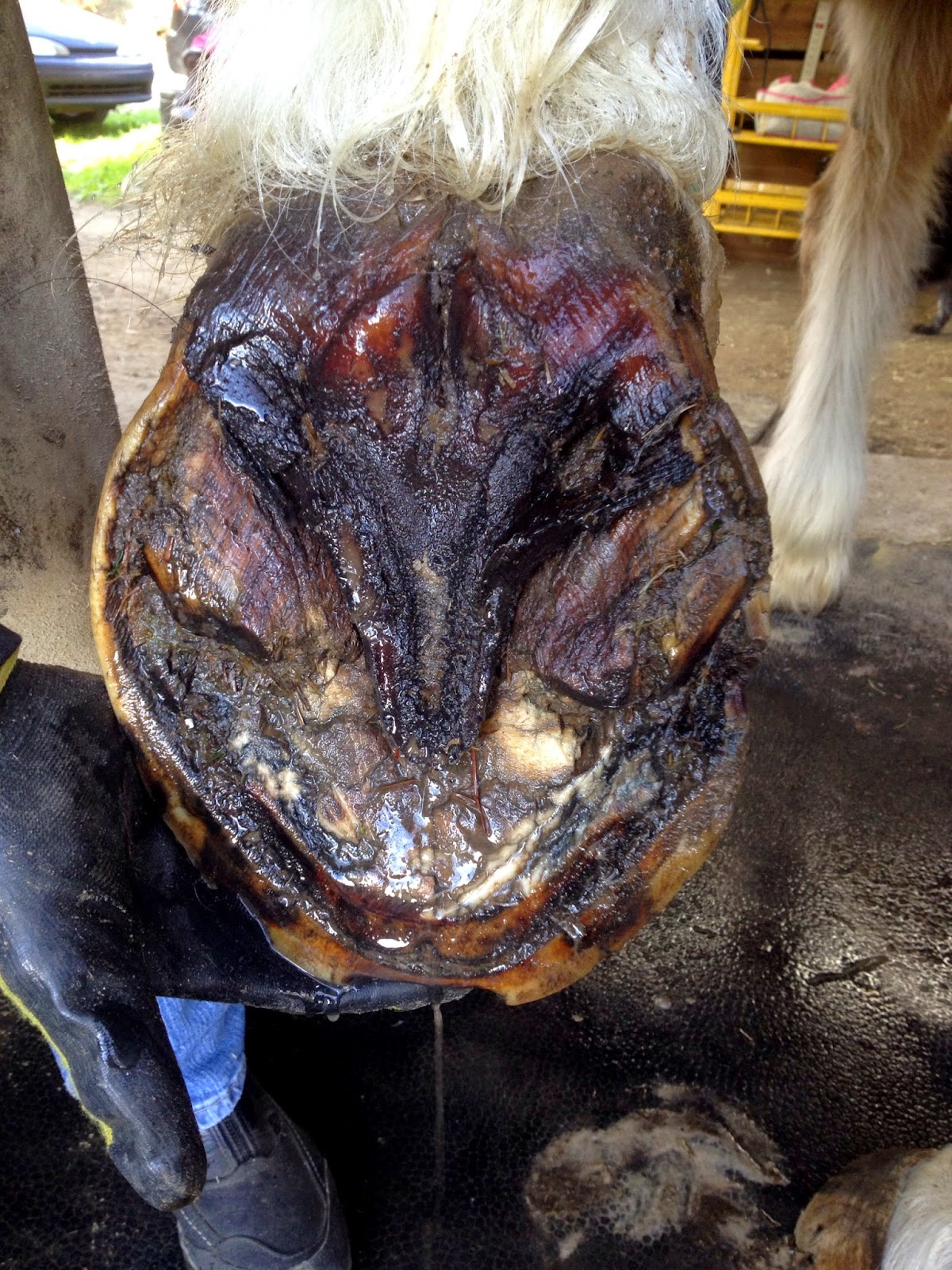 After the shoe was pulled and the foot was washed.  Thrush much?  Bars much? 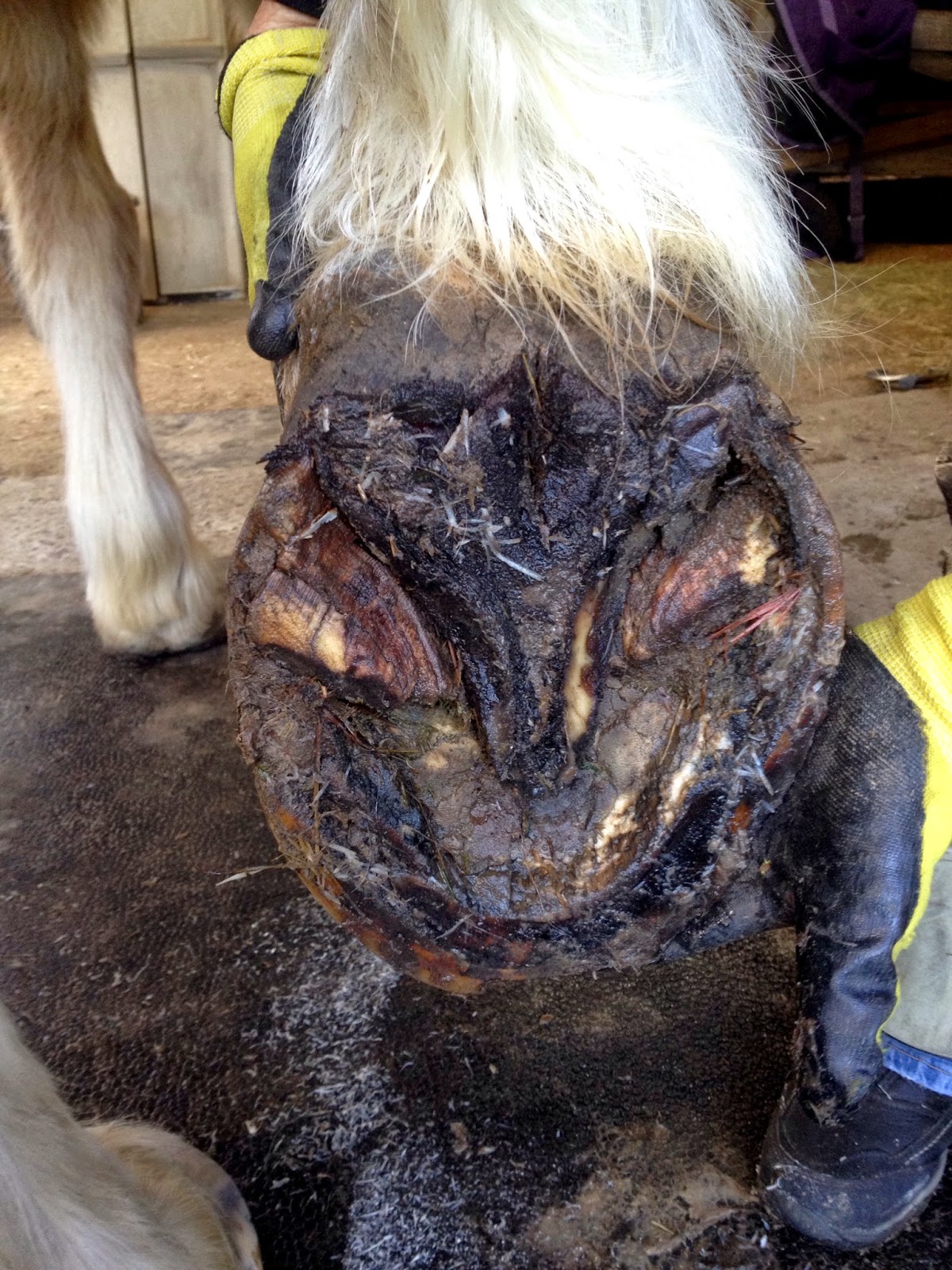 Check that frog out :/

To be honest I did expect him to be sore.  After spending the majority of his life shod and shod 100% of the time for the past nine years, I knew the barefoot transition could be a journey.  But that was fine, we have all the time in the world.  No matter what he needed, no matter how long it took, we would do it.

After his first trim I Clean Traxed all four of his feet then kept on that thrush with Silvetrasol spray.

His feet went through some interesting changes that I have never seen feet do. 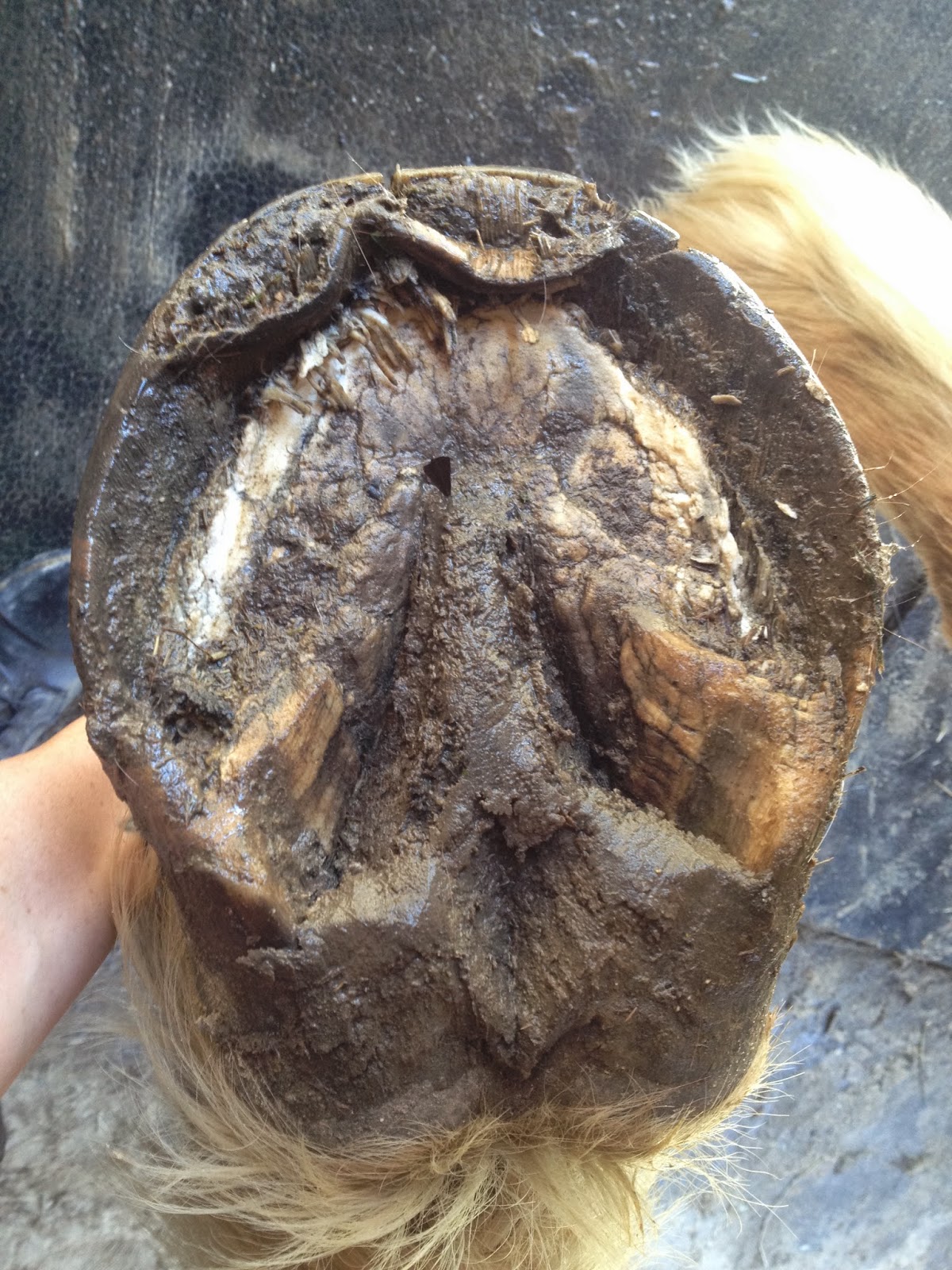 I can't find a picture right now, but big chunks of his wall fell off too because it was so weak and brittle.  We literally rebuilt Wes' feet over the past year.

Through this all, this guy has NEVER taken ONE sore step!  Not ONE!  That is a true testament to the work of our DAEP, Cindy Ford.  This is the second horse for me that she has transformed their feet completely.  Mochi came to me from a hack job farrier and even had bruising in her feet.  I will make another post with pics about that some time.  Mochi has also never been sore from a trim with Cindy.  She is patient and seriously loves what she does for horses.  I know that Wes didn't take a sore step only because it was Cindy that was in control of his hoof care.

Wes was trimmed yesterday, one year to the day his shoes were pulled.  Here are pics of his feet today: 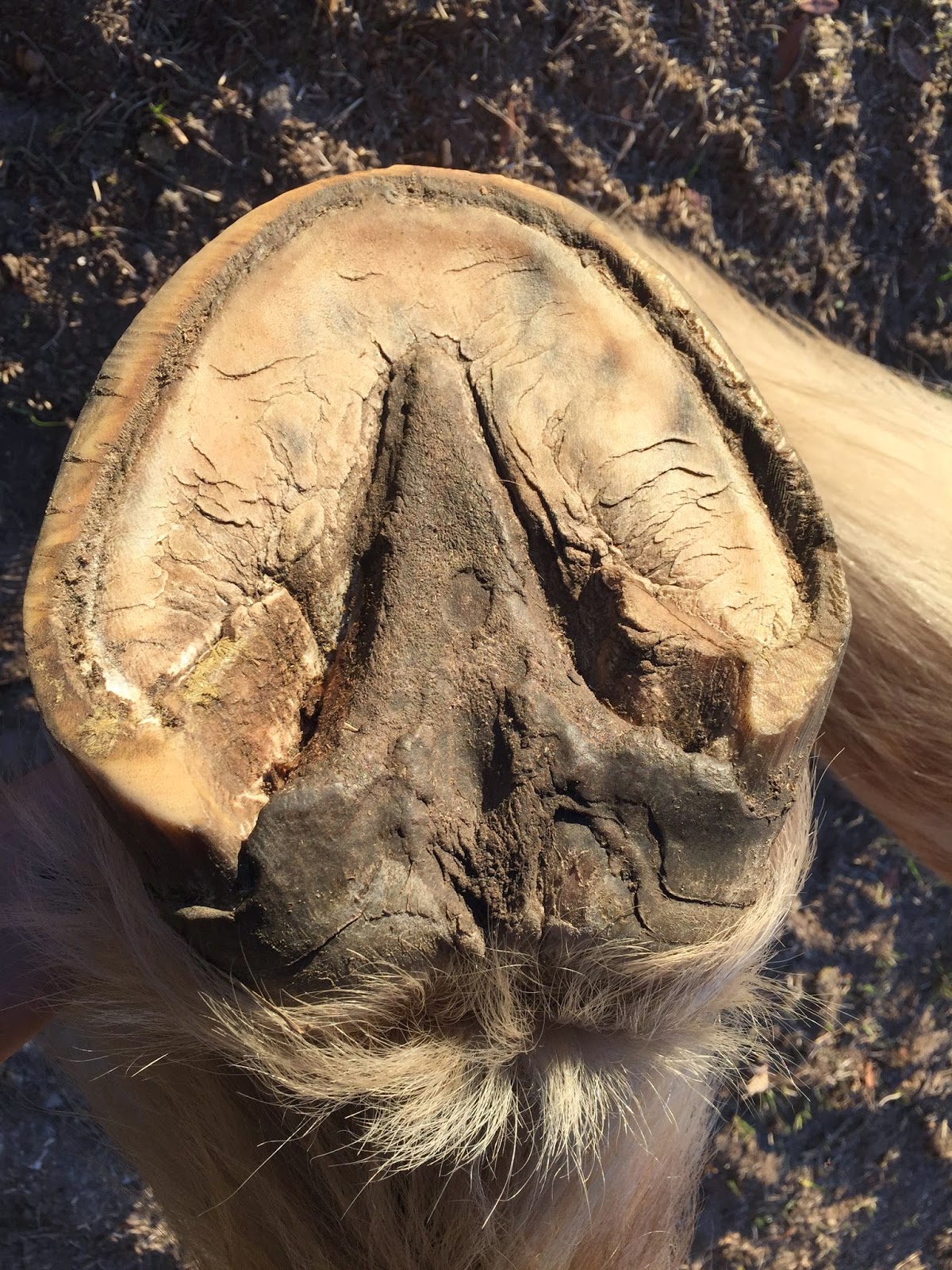 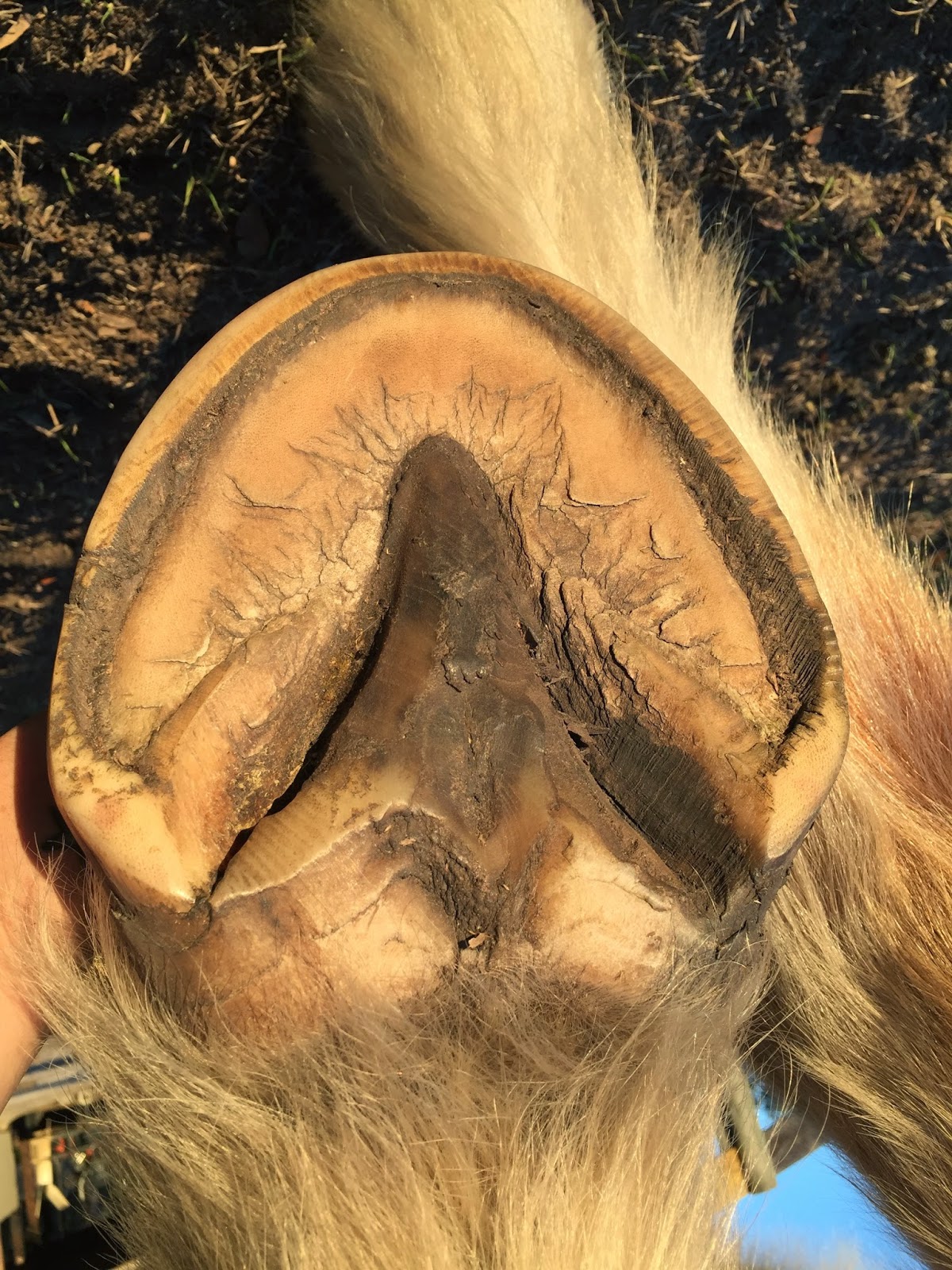 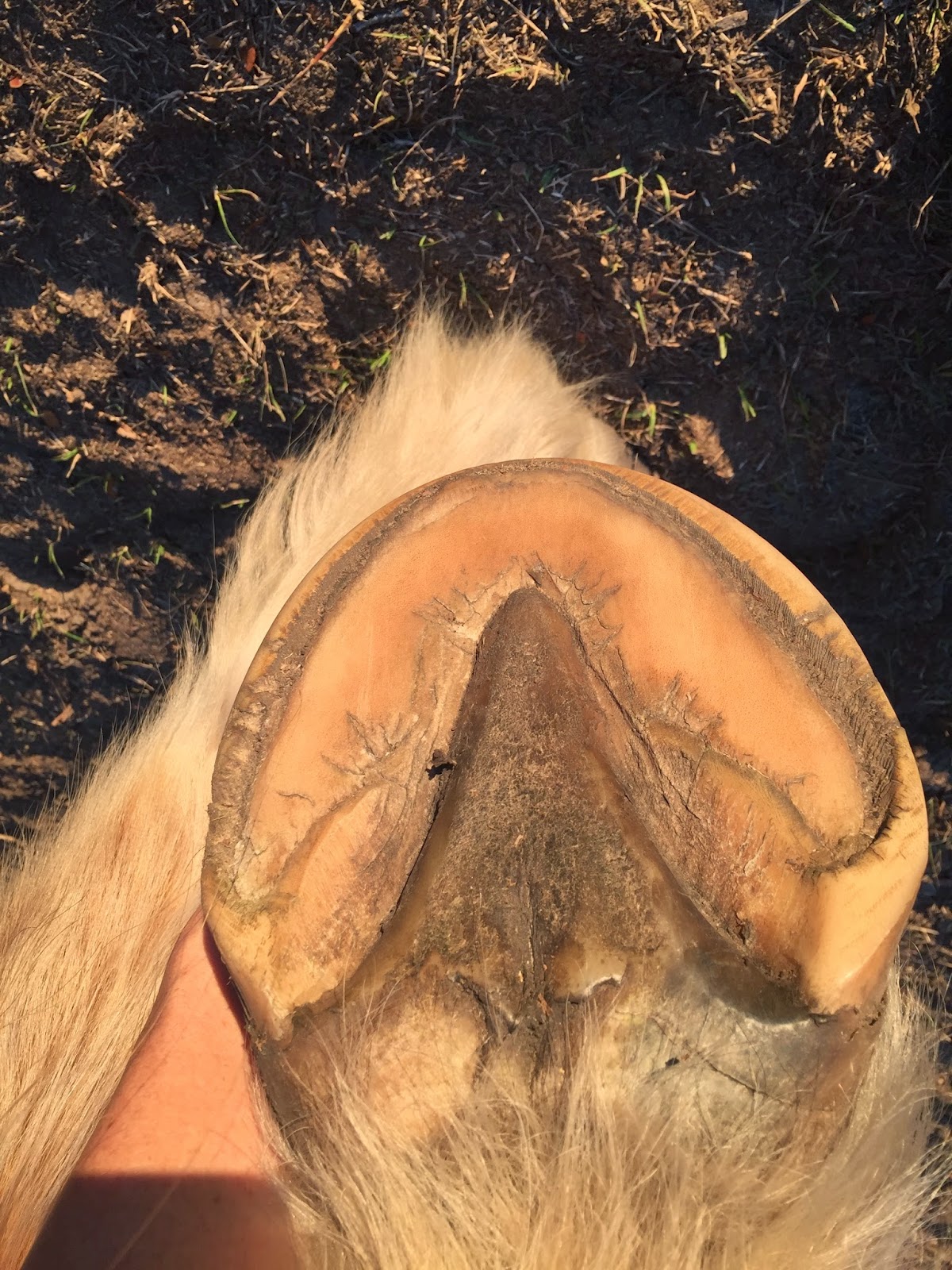 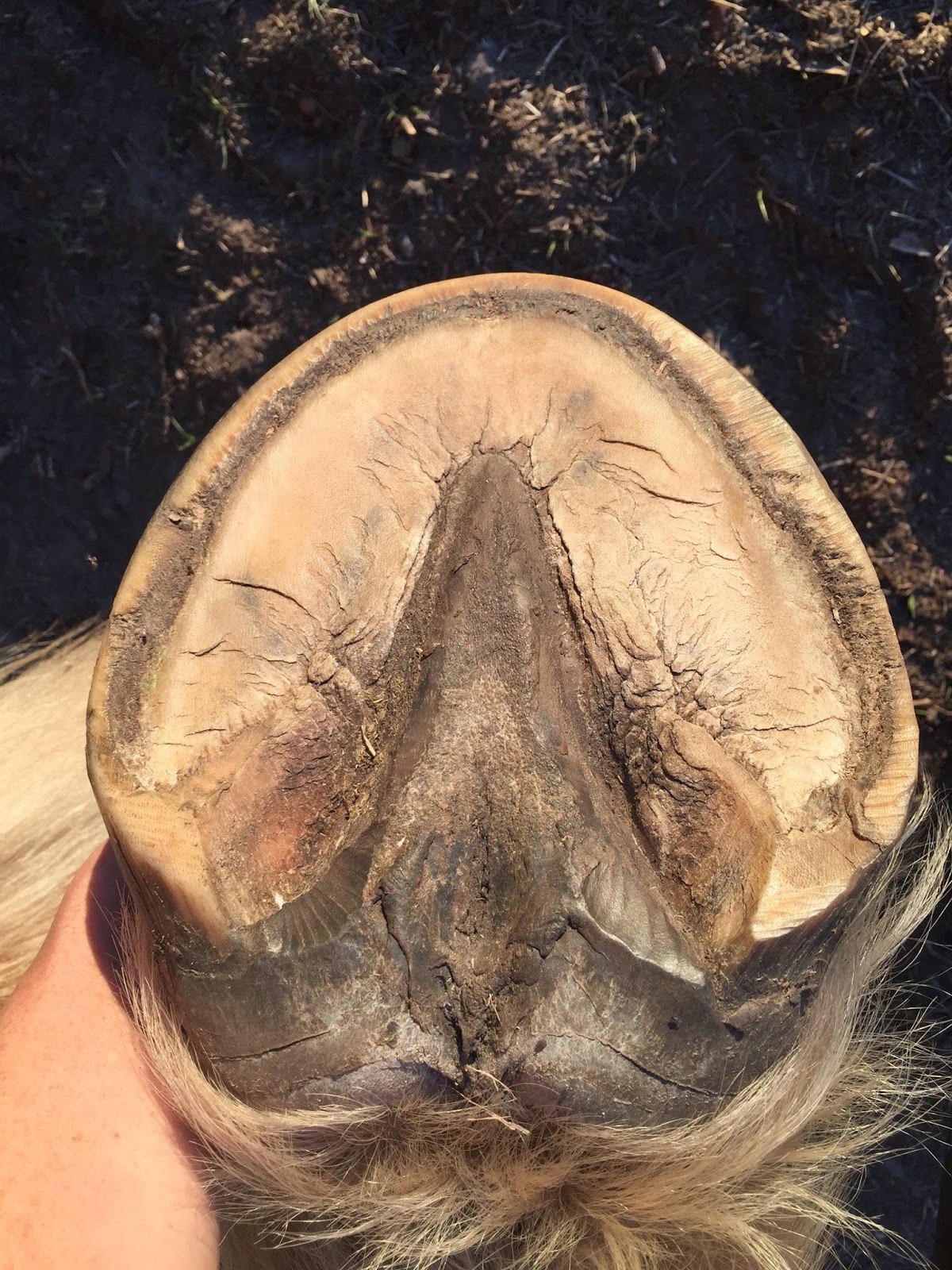 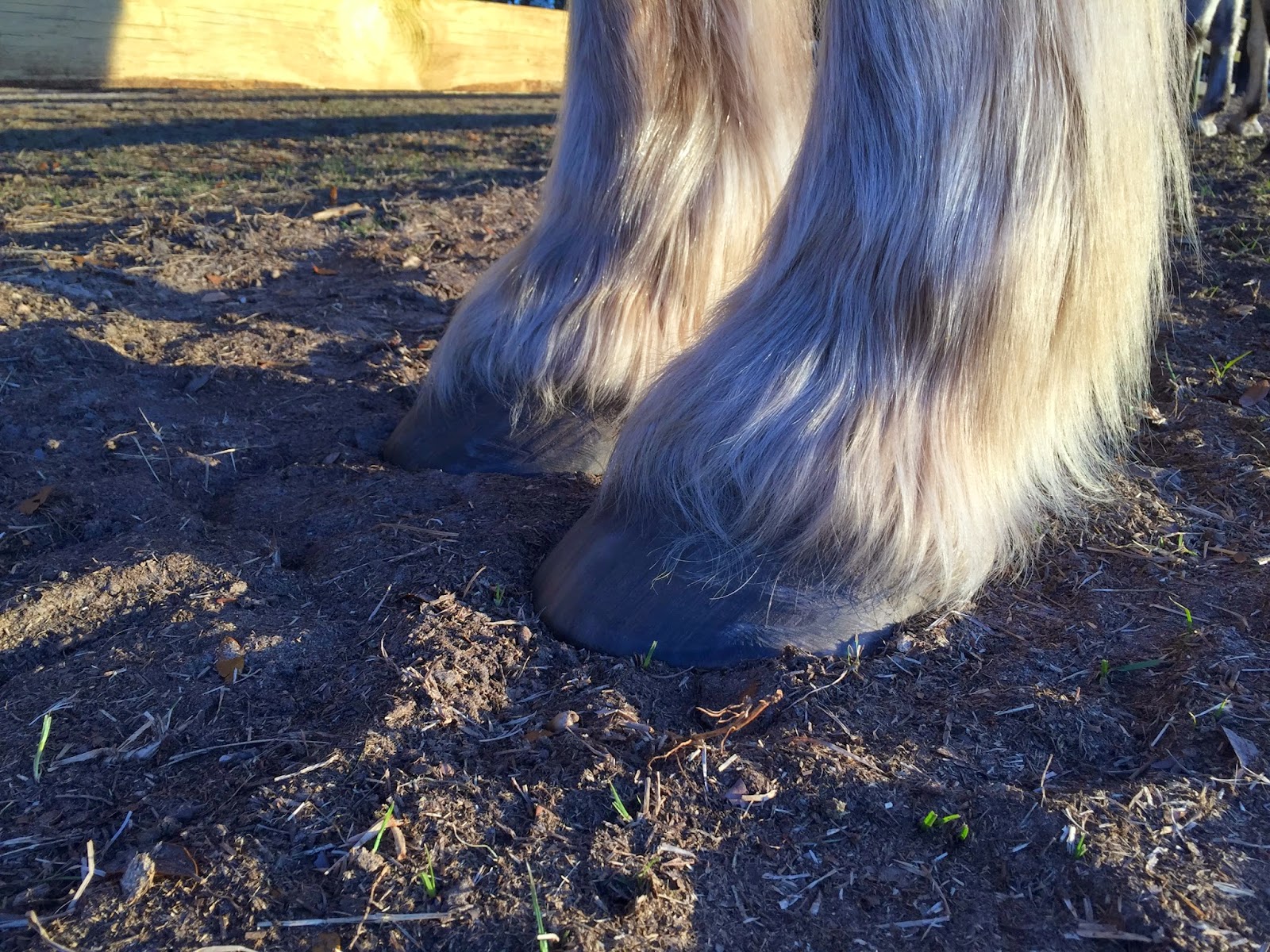 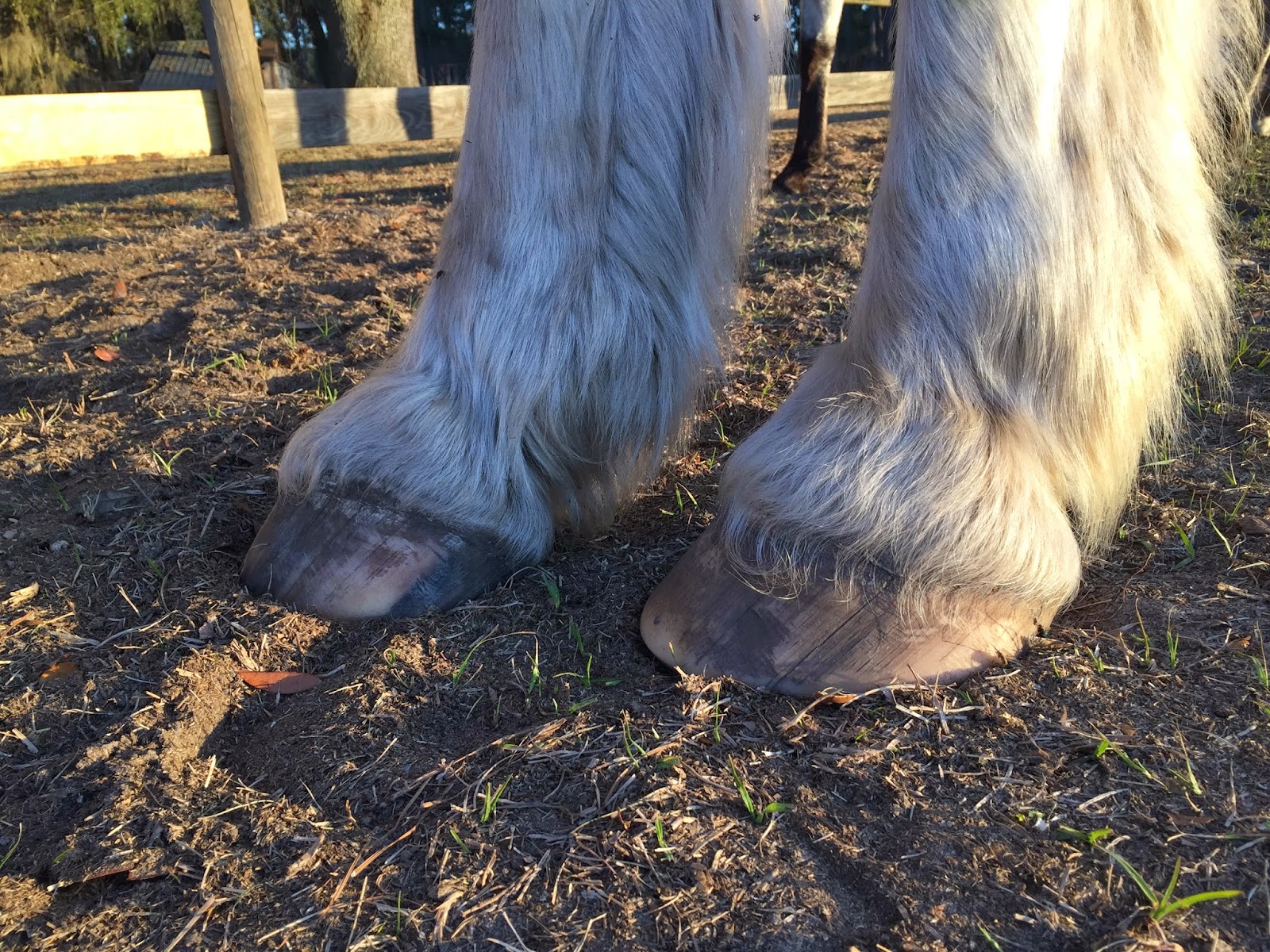 In the past year Wes' legs have also straightened up significantly due to be loaded correctly from correct trims.  Cindy has rebuilt Wes from the ground up, and we cannot thank her enough for everything she has done and continues to do. 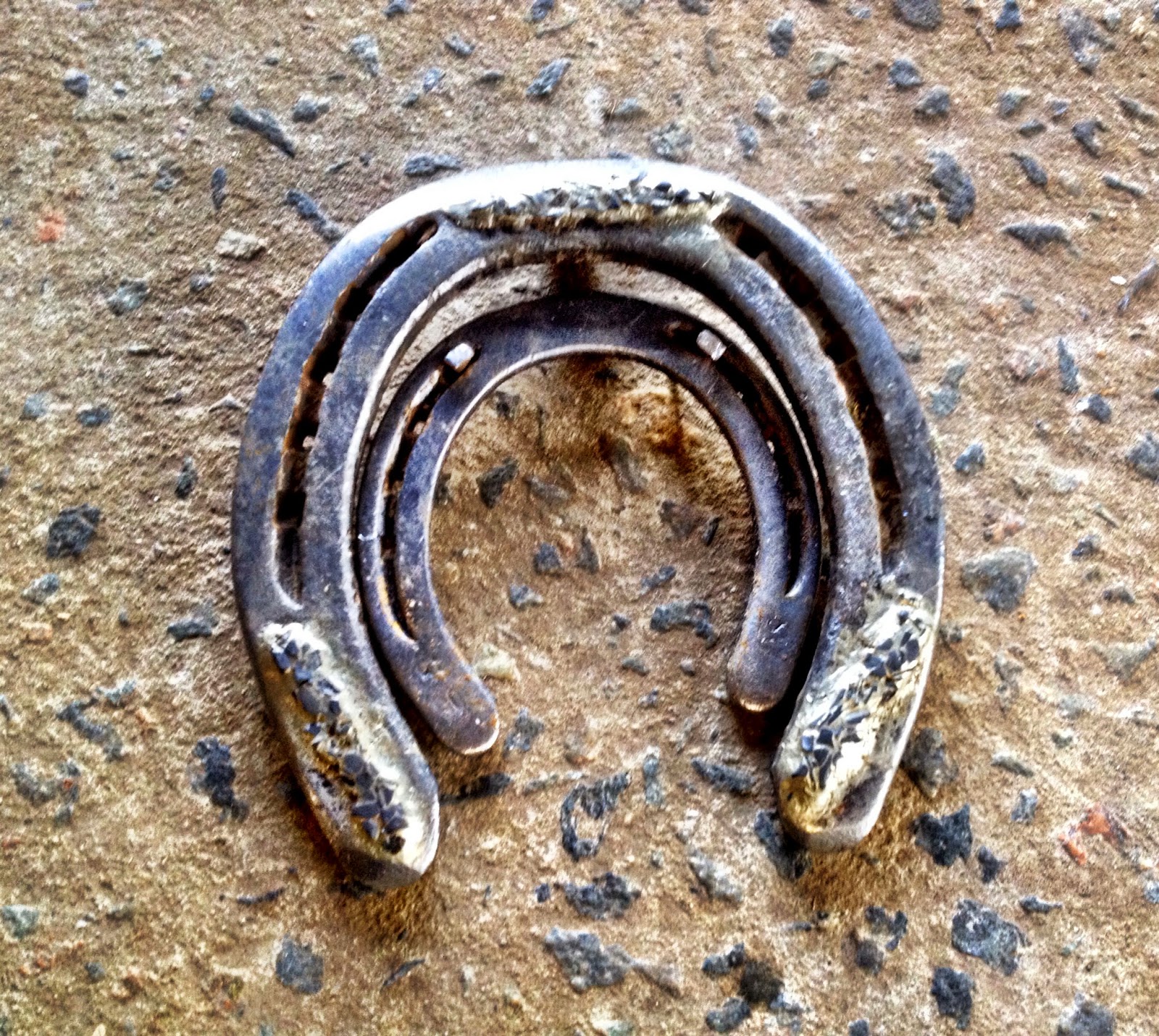 A light horse shoe inside a Wes shoe!
Posted by The Jumping Percheron at 9:29 PM