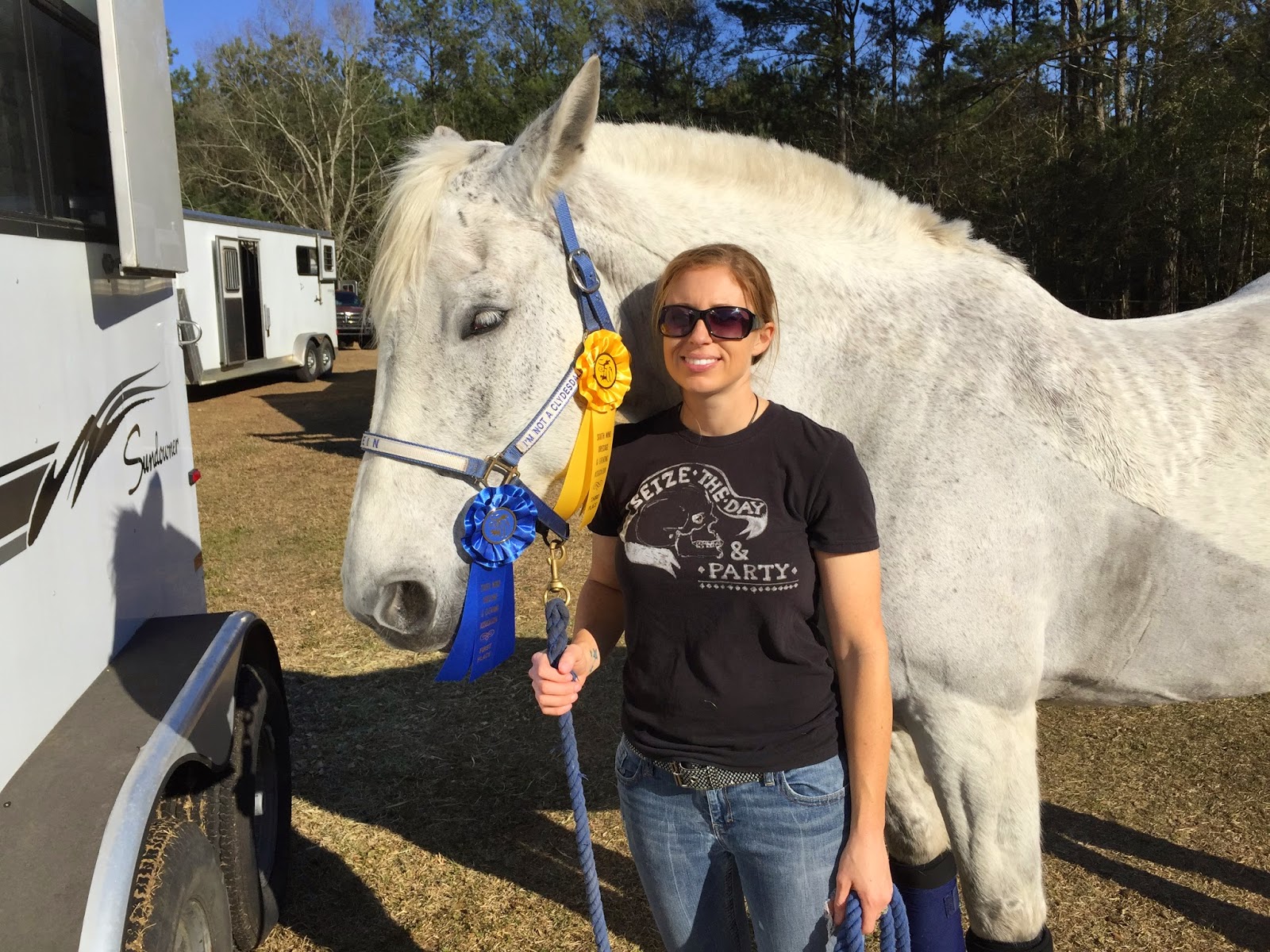 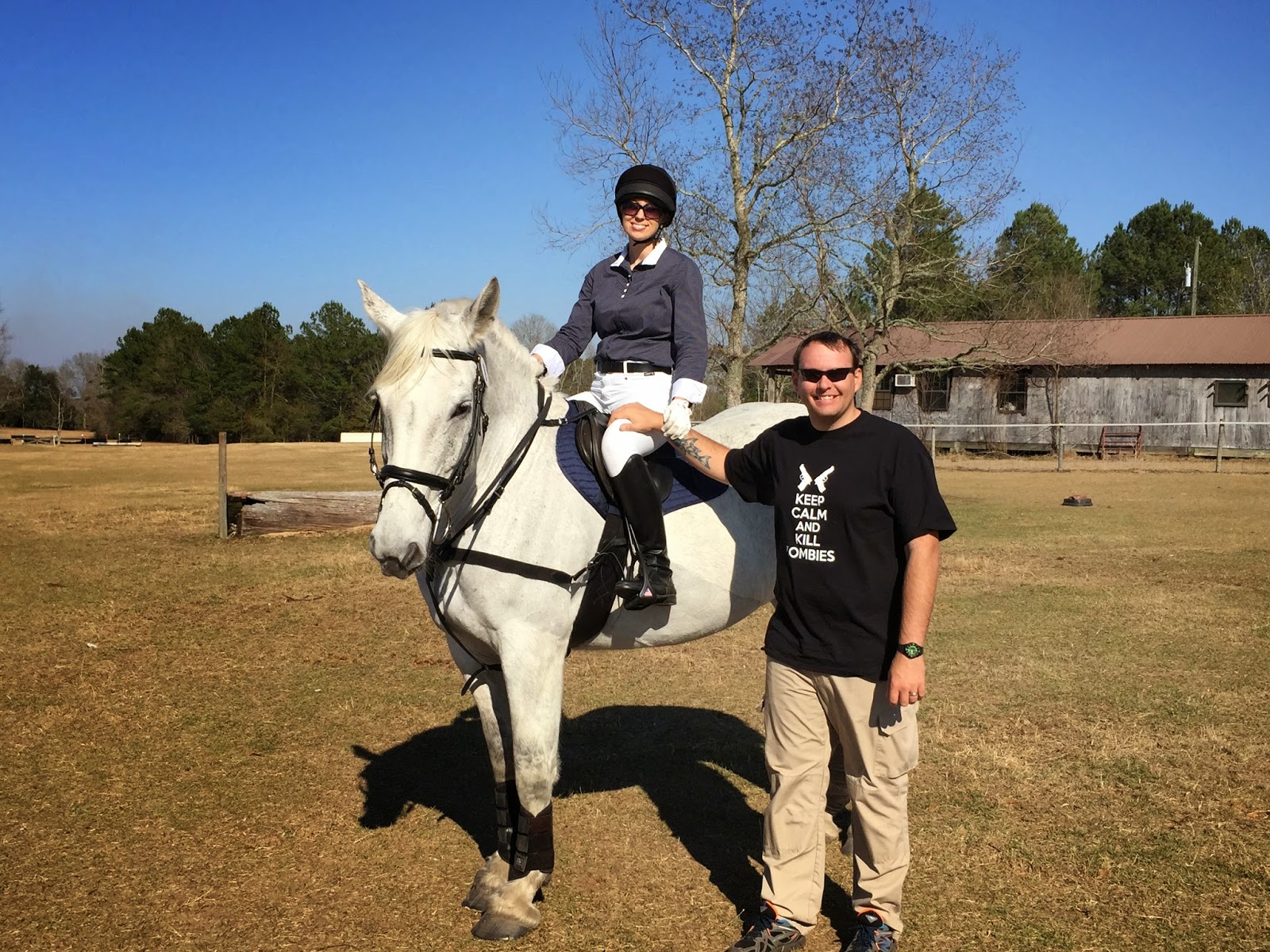 It was definitely not our best show.  It started off early and cold.  All week it was beautiful here, mid to high 60's and lows in the upper 40's.  Then we had a couple super cold days.  One of them was Friday.  It only got to 50 and the low was like 30.  Ridiculous.  So, Saturday morning when we got to the barn at 6am, it was 31 degrees and the sun wasn't up yet.  Only the Other Half would be up on a Saturday morning at 5am and out in a dark pasture by 6am filling a hay net while I got Klein.  The ponies were looking at us like what in the HELL are you doing out here right now?!?! 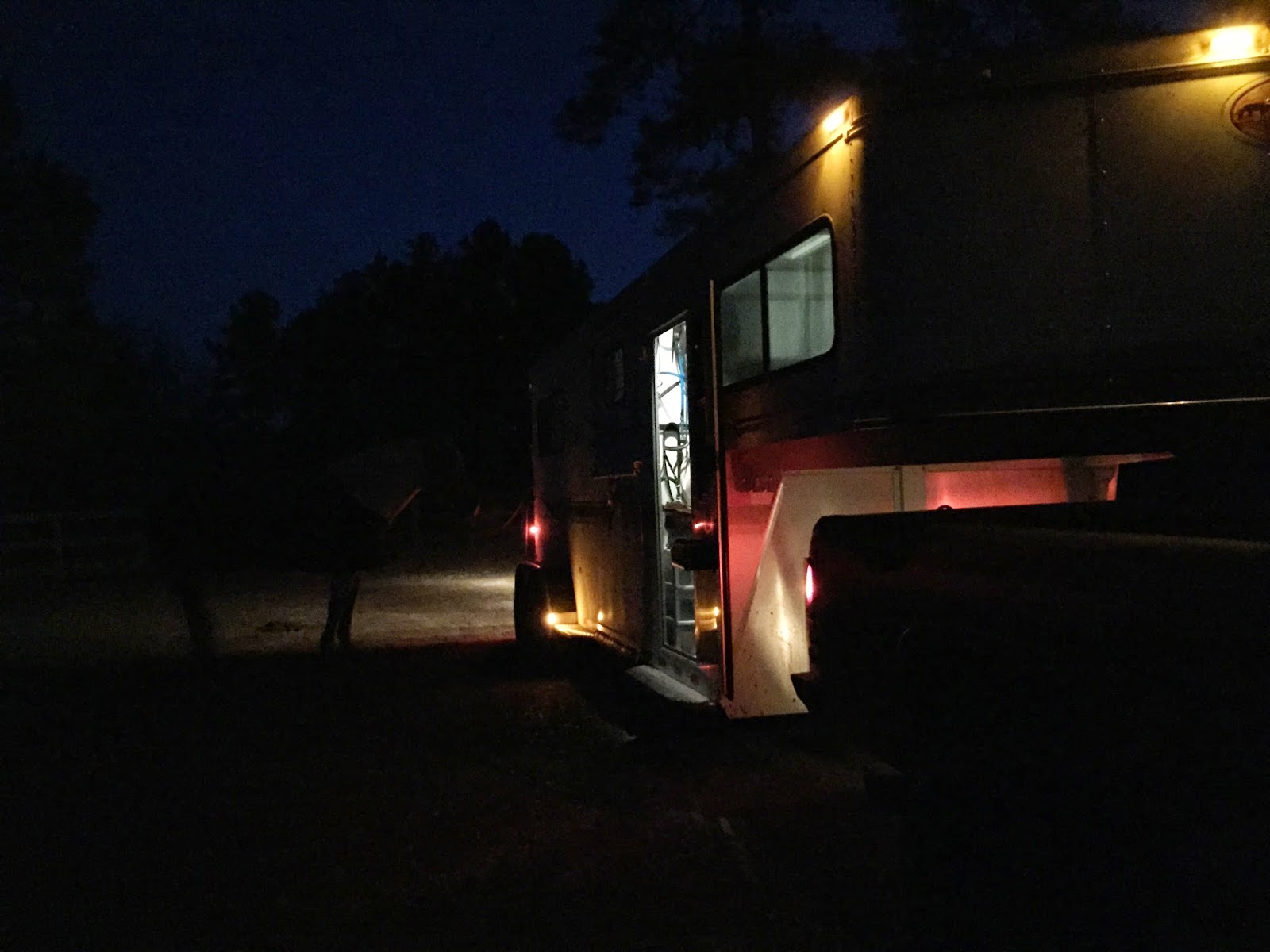 We got to the show and there was a wind.  Even better.  EVERYONE there was complaining about how cold it was and how much they hated it.  Come on people, this is Florida, no one lives in Florida because they like real winter weather.  This cold snap was a bunch of bs.  Though it did get to 64 late in the afternoon, but by then we were all wind burnt and still thawing out from the morning.

The dressage got behind schedule and we ended up waiting around for a while.  The wind was kicking our ass and I just could not get Klein to connect.  She wasn't tense from the wind.  She actually isn't really bothered with things blowing in the wind.  A lot of horses were freaking out because the decorative bushes around the dressage ring were blowing in the wind, then everything on the judge's table was rustling around and occasionally flying off.  Klein will walk right by that stuff and not think twice, thankfully.  Every now and then something will catch her eye, but not often.

Still, I just could not get a good connection going on.  She would not relax over her top line.  We did what we could with what we had that morning.  I knew the tests wouldn't be our best but what can you do?  Everyone is allowed to have a bad day, I guess this show landed on one of Klein's.  She wasn't acting out of character, just a little resistant I guess?  I would get a few strides of connection then it would be gone, then it would be back, then it would go away again. 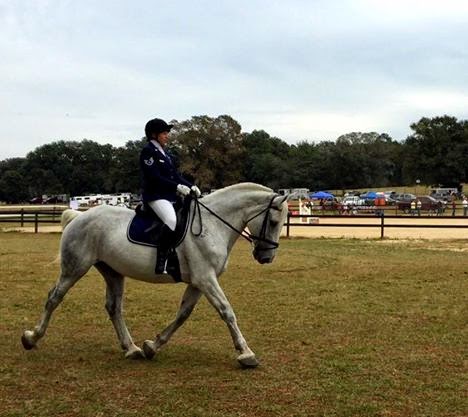 This is from a show last November.  This is the Klein that usually goes to shows, but she wasn't there on Saturday.

Surprisingly, we came out somewhat unscathed from our tests.  She scored a 33.81 on USEA Training A and a 62.66% on First Level Test 2.  First place was 65.94% on First Level, Test 2, we placed third.  That was the first time we had ridden First Level at a show.  I only have ridden a real USDF test one other time at a show in New Mexico.  It was a training level test and I don't remember what we got on it but we were 1st and 2nd.

I did get more than a few comments from the judge to the effect of "needs to relax over back."  But we knew that was coming.   BUT, we DID manage 6.5's on our lengthenings.  I know, 6.5 still isn't good but it's better than usual!  The judge said she could see the difference but there needed to be more difference.  We're working on that.  We just finally got a real lengthening a couple weeks ago, so the strength isn't quite there for Klein yet but I am so happy that we actually were validated by the judge for showing a difference.  FINALLY.  So I'm taking that and running, that was our small victory for the day.

While we had a crap warm up, Klein had her moments of brilliance in her tests. 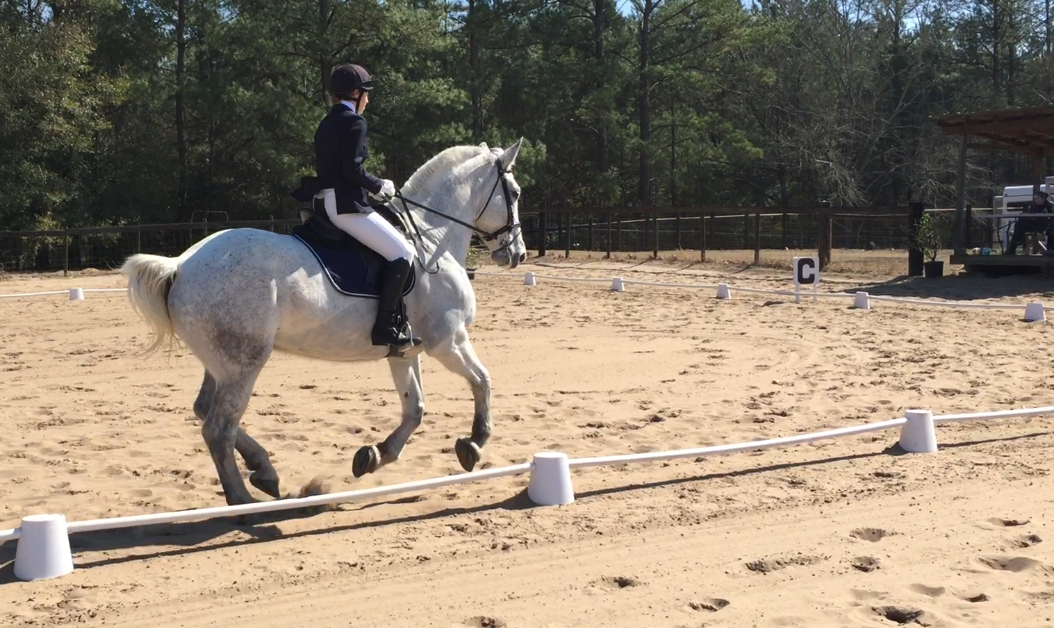 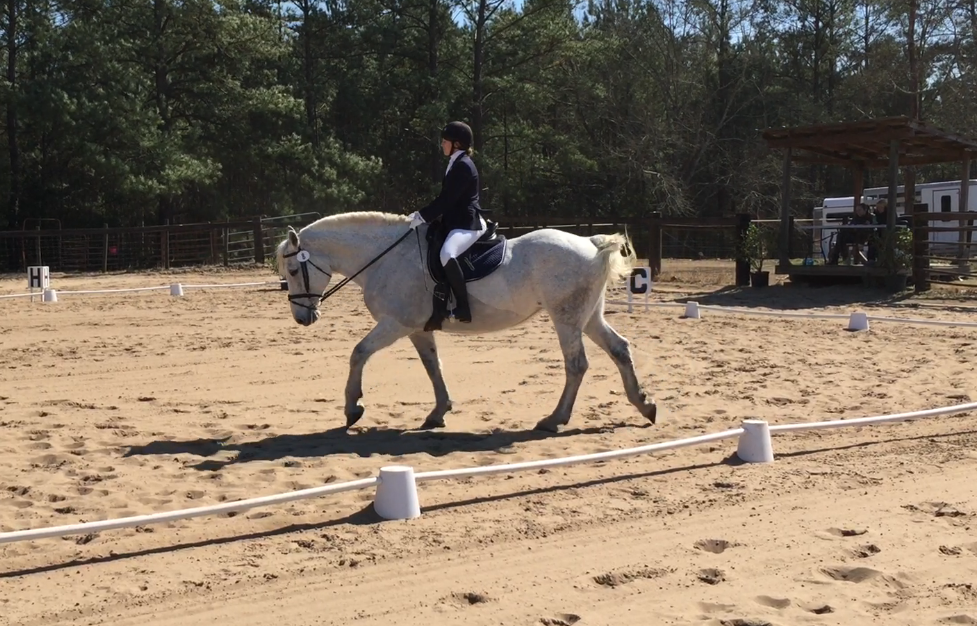 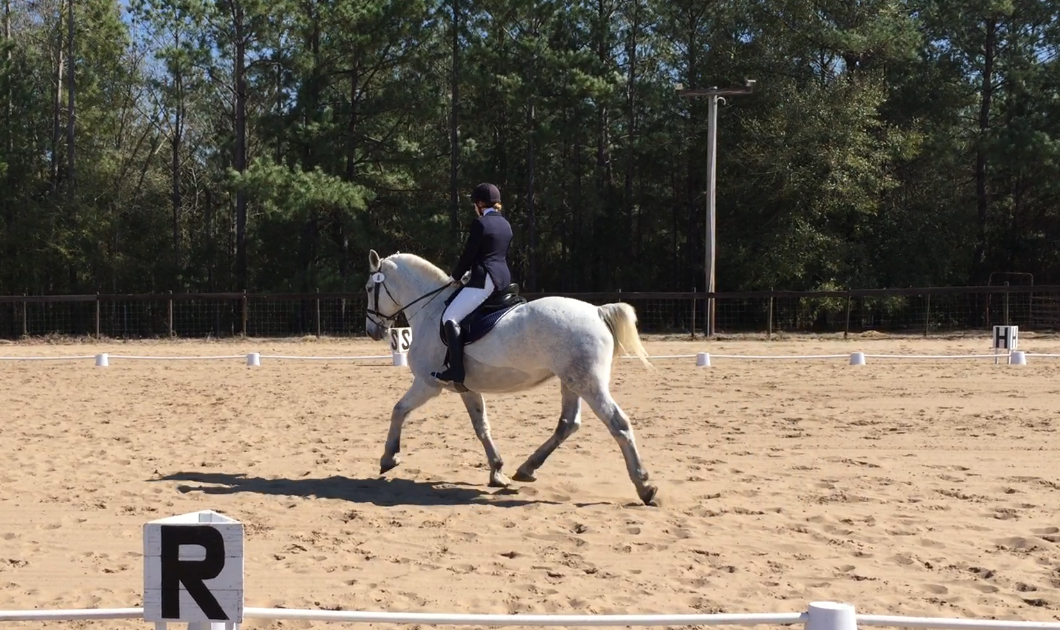 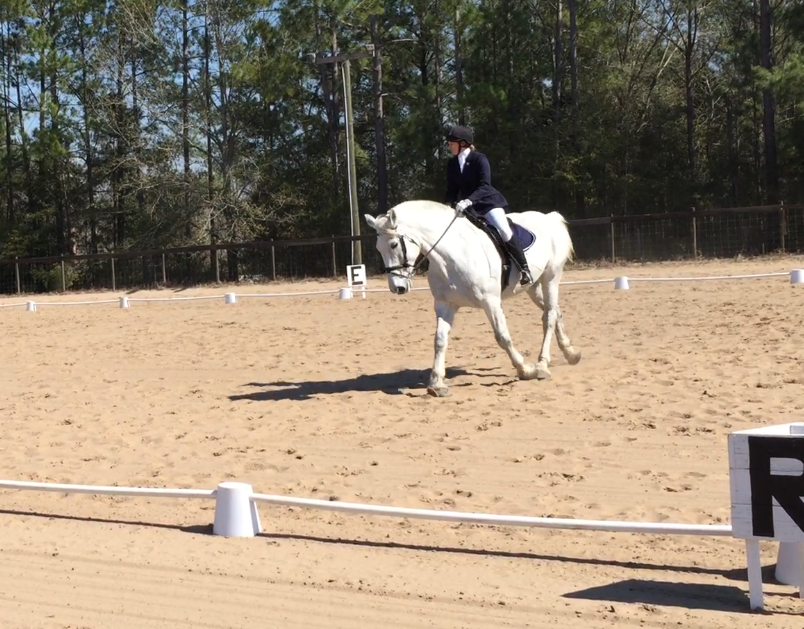 Stretchy 20m circle that kicks our ass in every test. 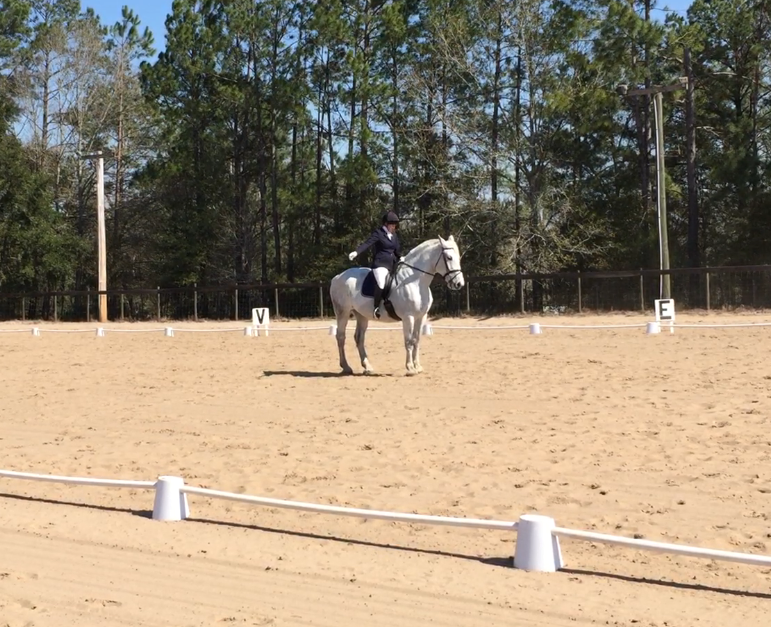 After dressage Klein was still acting like she normally does.  Taking naps in the sun, begging for whatever food you have in your hand, munching quietly on her hay.  Nothing seemed really amiss with her.  When I tacked her up she didn't flinch at anything, didn't move away from any tack being put on, etc...  I walked right up to her to bring her in that morning too.  Nothing out of the ordinary for her, at all. 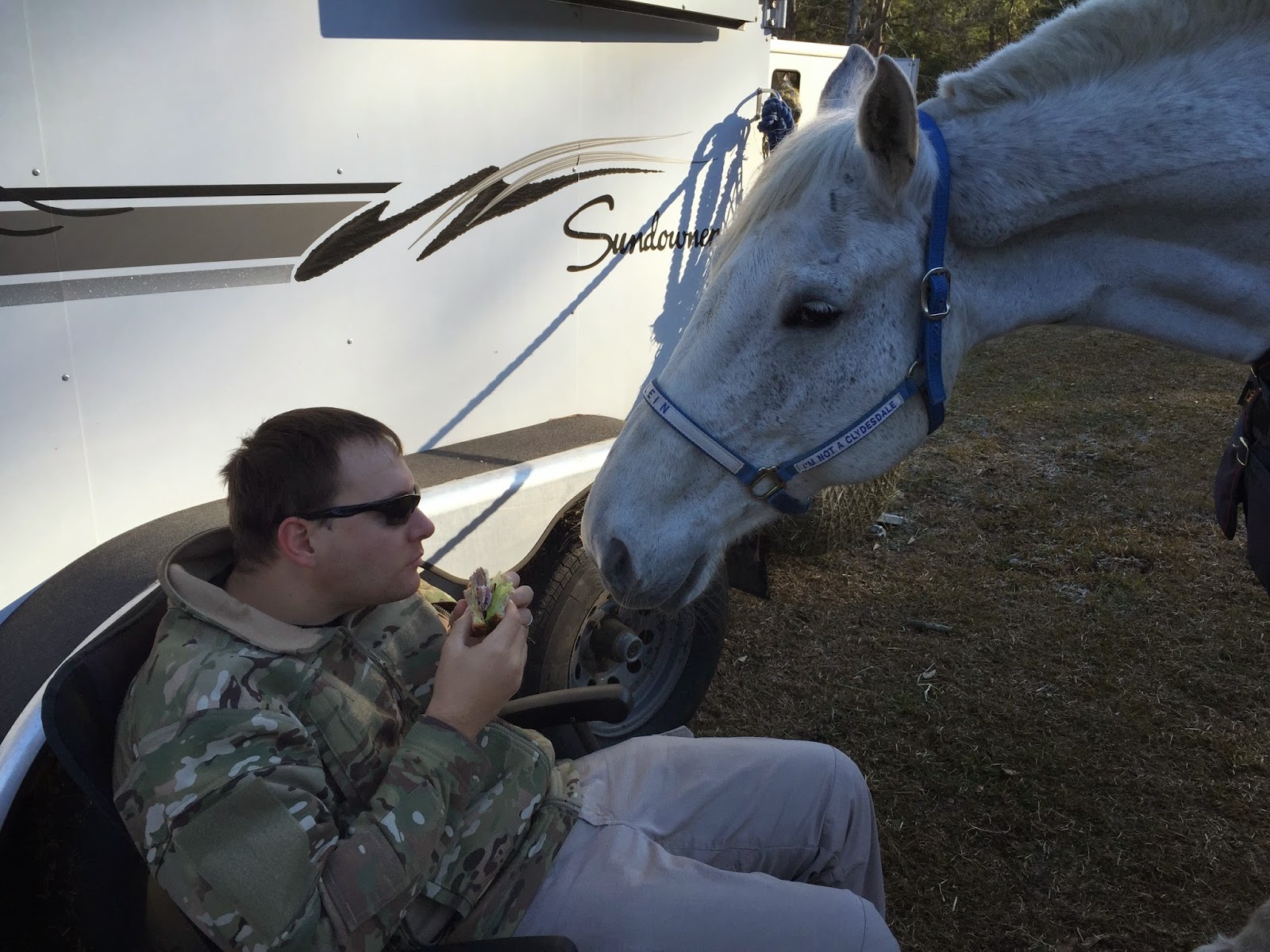 Begging for a bite of sammich from The Other Half, which he gave her.  She actually ate one bite of it!!  Weirdo.

The time came to warm up for stadium and that's when I knew my regular Klein wasn't at the show that day.  In all the shows we've been too she has never stopped in warm up.  She's not a stopper.  But she stopped on me in the warm up.  She was moving out fine, had a nice canter going on and then, there was some hesitation in front of the fences.  I walked to the outside of the warm up area and just sat there on her.  I didn't know what to think.  I didn't know what to do.  She doesn't stop.  The Other Half came over and I told him I had no idea what was going on and he basically told me I needed to man up and make a decision on what I was going to do. Sometimes he has to make decisions for me because I can't do it myself for whatever reason.

We got a nice canter going on and I got her over a couple fences.  I know she could feel my worry and I know that created a loophole for her.  I didn't keep my leg on the "go button" right behind the girth.  She stopped again.  Everything Denny Emerson says about being a heat-seeking missile to a fence completely went right out of my head and I was consumed with wondering if, for the first time ever at a show, we should scratch.  I would have scratched if she wasn't moving out so well.  She had a great canter, she was responsive.  Wtf was I missing?  What was she trying to tell me that I couldn't hear?

The Other Half suggested I just try to clear my head and ride.  He even walked away from us at one point to try to force me to make a decision because he knows how I work.  A friend/instructor that I have ridden with before was there and he suggested I go ask her.  Then she yelled my name and asked what I was going to do because I was almost up.  She suggested I give it a try and I said ok, but if Klein stopped on course we were scratching on the spot because that would be the last straw and I'd know something was not right.  In we went, and we went clear.  She was sticky but no rails, no stops.  Cue complete confusion. 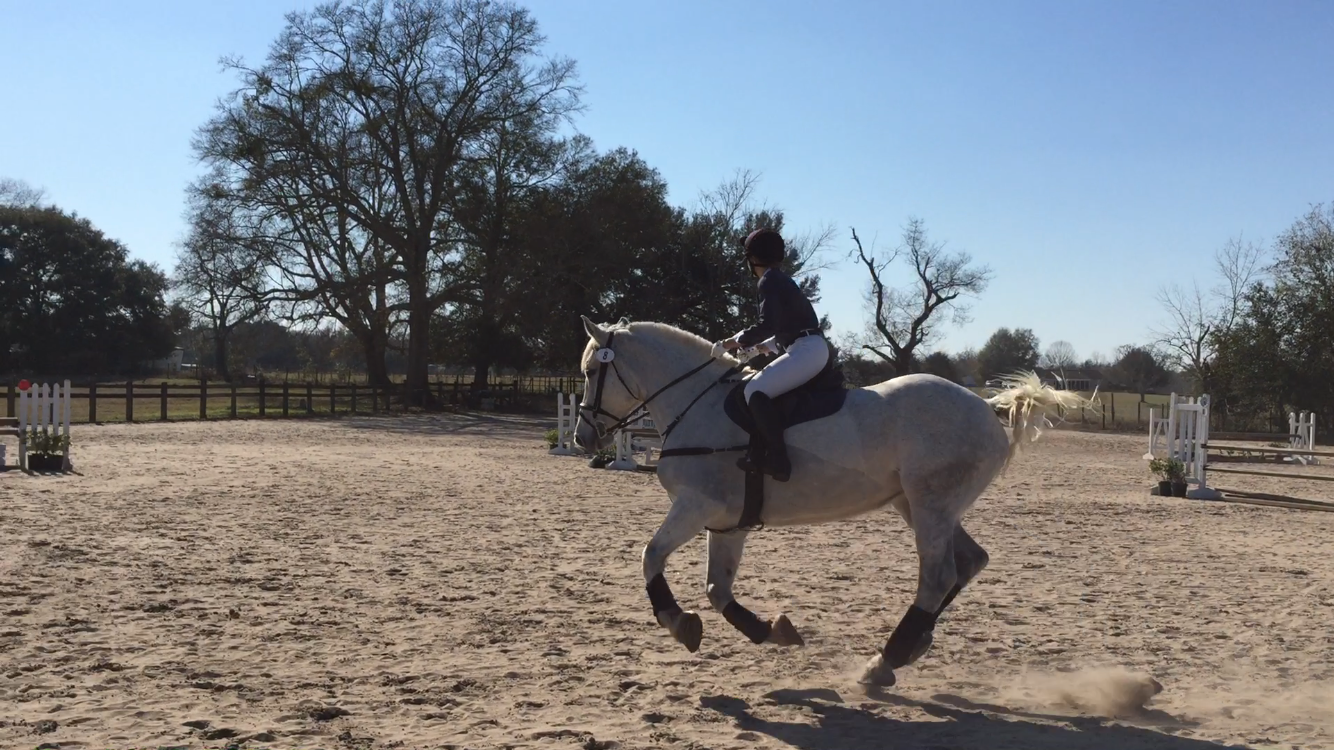 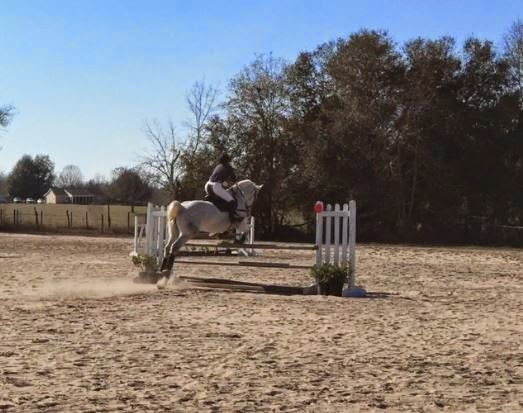 A little stick to this one, but clear. 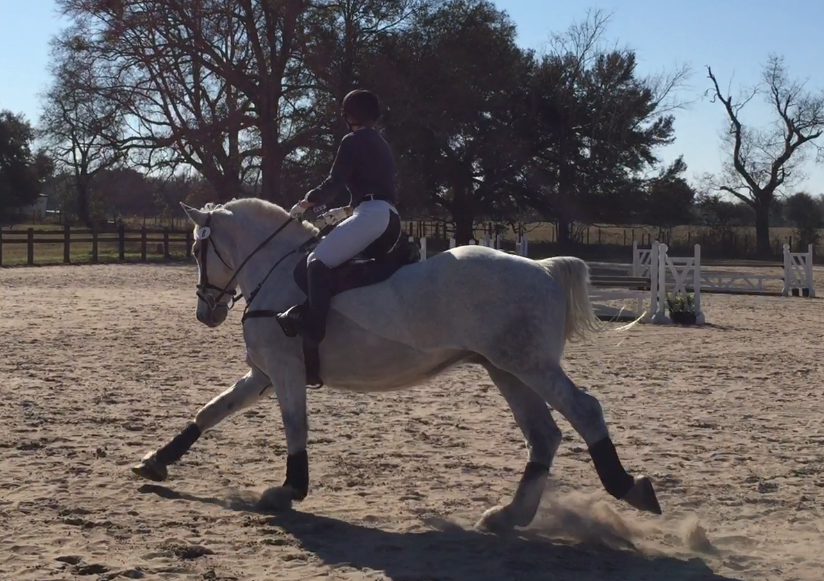 She was moving out fine, ears pricked, etc...


Later that night it dawned on me because you know I couldn't stop thinking about it.  You know my new Total Saddle Fit Jumping Girth? 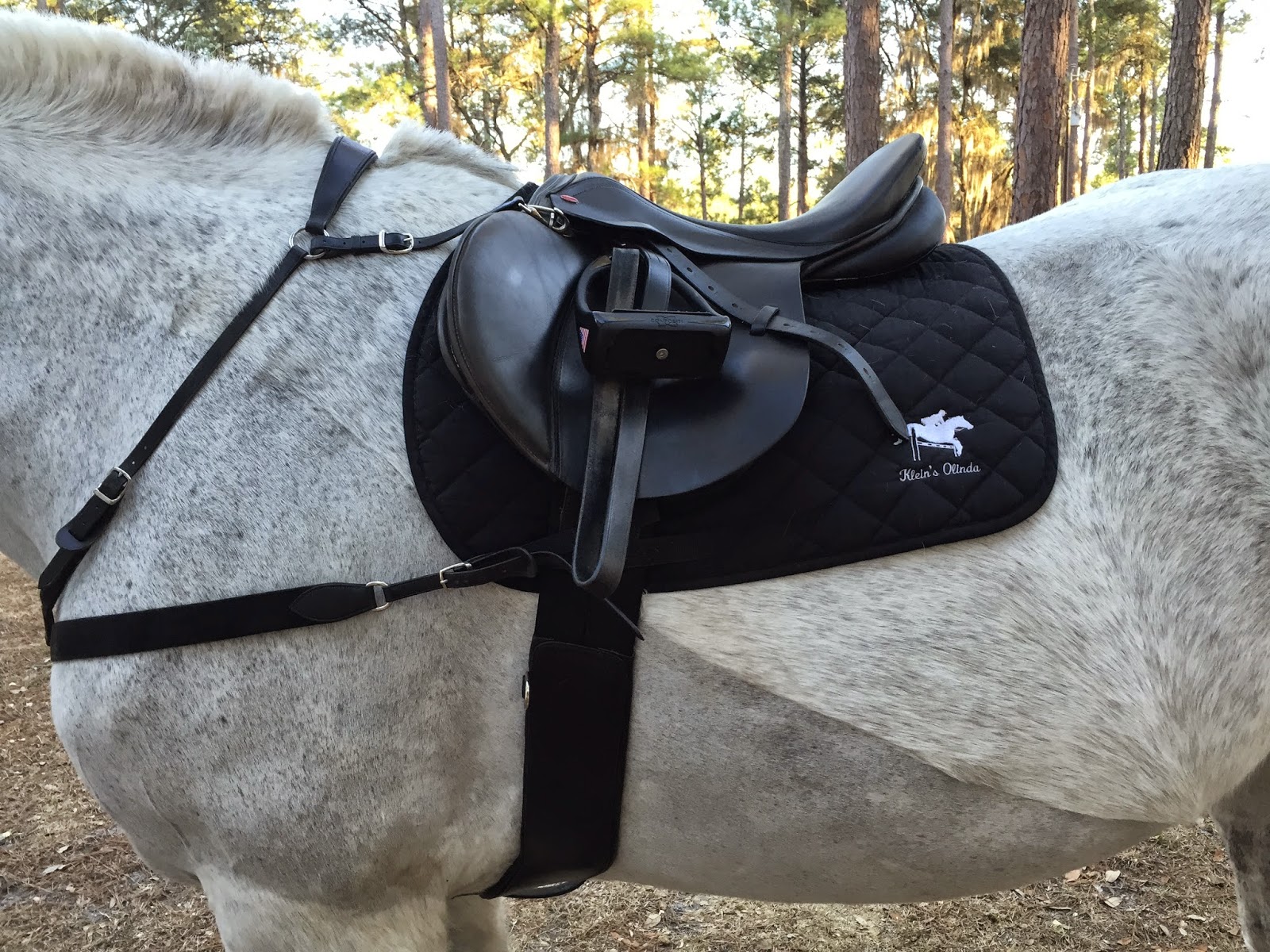 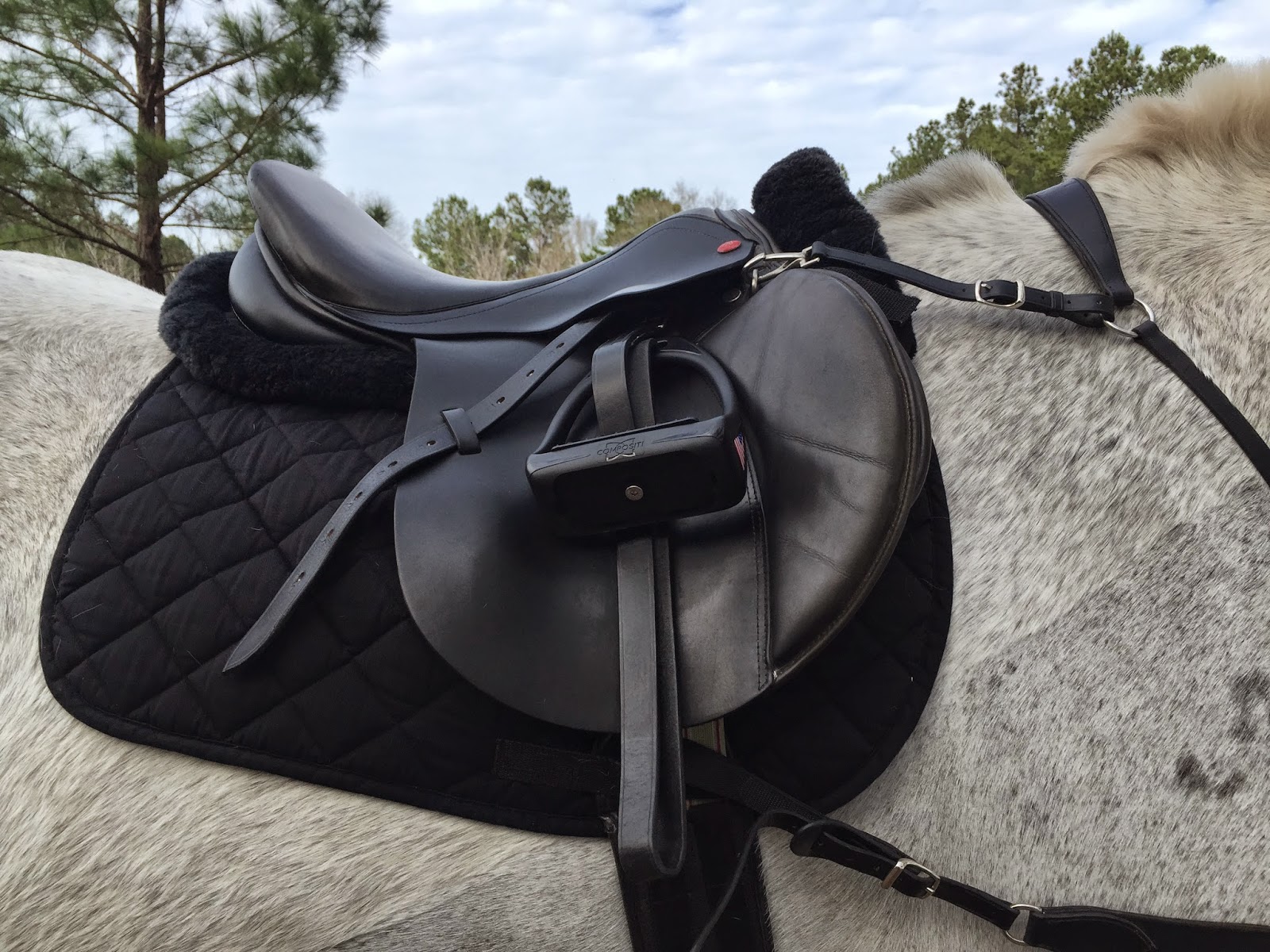 Did you spot the difference?  *face palm*  So the new girth has to break in.  It is the same size as the old girth, but I've had the old girth for about five years.  The elastic on the new girth needs to break in and give a little.  It was about an inch to short to girth up with my half pad.  So, until it breaks in I was just going without the half pad.  The reason I ride with it is because Klein has changed shape just a little over the years and I believe her saddle may be a tiny bit too wide in the pommel right now but the half pad cures that.  It sits on her fine, it's my weight that makes the clearance just a little close.  See where this is going?

Did I make some pressure point by riding without it??  I did the test run with it and she was fine, you guys saw the video in the last post.  The new girth did already stretch a bit though because I was able to girth it up one more hole after riding around with it warming up.  Maybe that one extra hole created pressure?  Was that what she was trying to say?  Was I some completely deaf a-hole Saturday?  Klein usually is not the Princess and the Pea, but that doesn't mean it's not possible.  If I would have realized that I would have ran back to the trailer to switch out girths really quick.

If that was the problem that still doesn't explain her dressage warm up.  See why I can't make a decision for myself sometimes?  Something goes wrong and the flood gates of my mind open.  I still believe the TSF is the right size for her.  The 58 would be just a bit too big when it breaks in.  I can get an extender so that I can girth up with the half pad until it breaks in more, actually it might be fine now after having to girth it up another hole on Saturday after riding around for 10 mins.

There is a great saddle fitter that comes to our area and you better believe I already have contacted my friend that schedules her visits to see when she is coming next.  I missed her last visit by just a couple days, or I would have been there.  She will reflock your saddle on the spot.  I will have her look at both of Klein's saddles, if she can refit the Presto then that is great, if not, I'll order a new one because I do love that saddle.  That saddle is five years old, it is probably past due for some love from a fitter.  But Klein has always been fine in it, the only time I have wondered about fit is after this past Saturday.  Or maybe I'm imagining things and the clearance isn't as close as I think.  That's why we will get an appt with the fitter.

Klein also has an appt for a massage and chiro adjustment tomorrow just to be sure there is nothing going on with her.  I touched and pinched and prodded all over her back with no response.  She just saw the vet two weeks ago for a coggins and health certificate and the vet actually said she looks like she has put on a little muscle and is looking fabulous.  She just had her feet done last week too.  We have a big weekend coming up, but if the chiro finds ANYTHING tomorrow, I'll cancel it.  I'll post about our big weekend after the chiro visits tomorrow and I know if we are still going or not.

I was also planning to give her this week off anyway.  Both times I've gotten Moch out the past two days Klein comes looking at me like "Are we not doing anything?"

Horses, why can't they just speak english?!
Posted by The Jumping Percheron at 9:41 PM