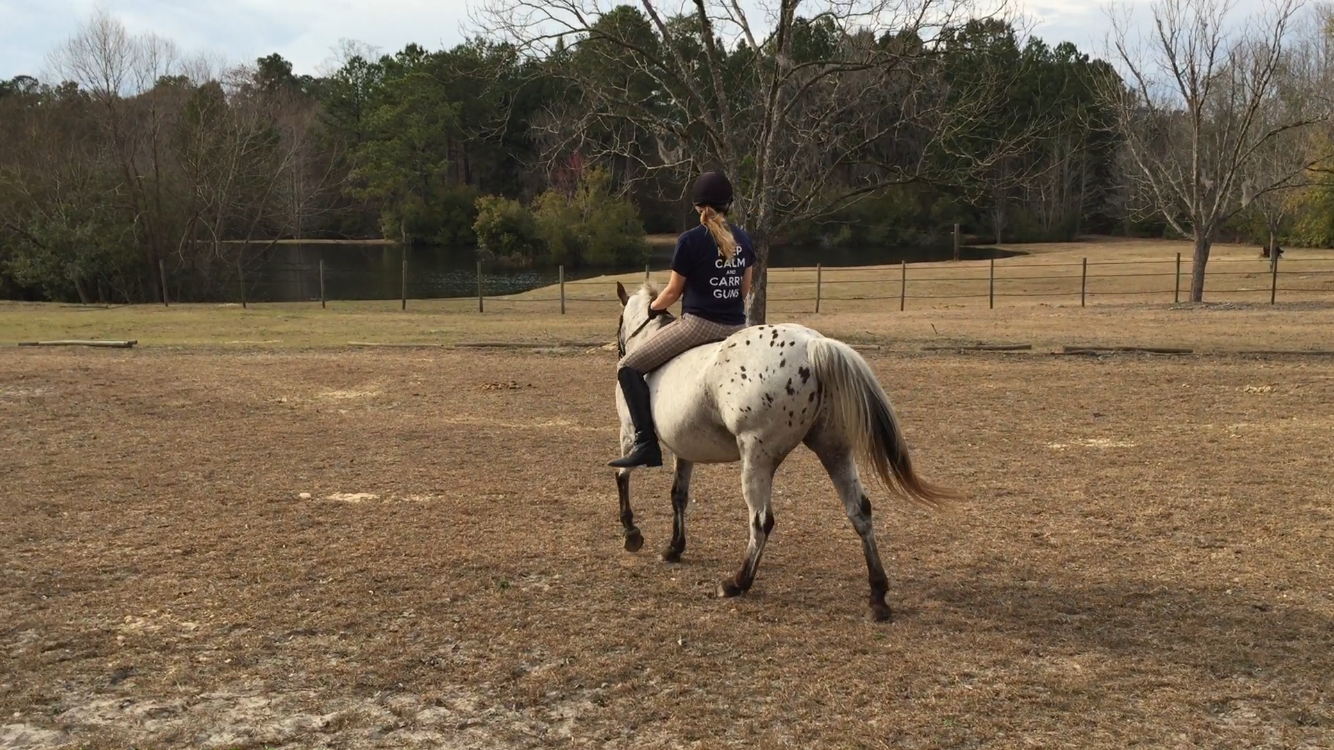 Anyone that reads this blog regularly knows the emotional roller coaster that Mochs has taken me on.  Well, here we go again.  This time I'm holding my breath but I'd be lying if I didn't say that deep down, I am genuinely excited.

Quick background for anyone that doesn't know the Moch saga:

I bought Mochs two years ago after falling head over heels for her personality.  She's a brave, athletic little POA mare.  I didn't go looking for a pony, but just like how you never buy a horse for their color, she may be only 14 hands but she is just one cool little horse.

I started riding her shortly after I moved here because she needed a job and had been a pasture ornament for years.  She is a 2003 model, but a very, very low mileage 2003 model.  She has never really been in any consistent training and she's green.  I did hear at one point in her young life some one attempted to make a western pleasure horse out of her.  That's pretty hilarious.  I can see from ten miles away why that never worked.  She is THE energizer pony.

Anyway, my goal for her was for her to be a lower level event pony.  But we never found our groove.  I bought her very shortly after I started working with her.  Different bits, different saddles, chiro adjustments, massages, teeth floated, a great DAEP doing her feet.  Different approaches, patience, miles of relaxed trail rides, lunge line work, etc...  We never really fell into place together.  She just seemed to always have some pent up anxiety.  That is the problem with buying a nine year old.  I have no idea what all has happened to her in life, and I consistently appreciate that fact.  It's not like wakes up every day and decides you know what?  I just feel like resisting the shit out of contact and just acting like I have full on ADHD.

I had already resigned to the fact that if she just ends up being a pet, well, at least she is a pretty, friendly, affectionate pet.  And on the ground she's the quietest, most respectful horse you'll meet.  You wouldn't even know she's there, she would stand tied for hours like a little statue.

I'd give her months off then we'd have some good rides then it'd be back to resistance.  I gave her four months off from August to December, and before that she wasn't in any real work aside from hacks.  I rode her in December and she was a different horse.  I'm am 110% convinced she is here to teach me something and to make a better rider out of me.

Fast forward to moving barns.  I figured new barn, new friend to ride with, miles of beautiful trails, why not?  Let me just take Mochs for some hacks.  I actually sold her last jumping saddle because it didn't fit her perfect and hadn't bought another one because I was unsure what I would end up doing with her. So we just hack around bareback.  She would do her usual Mochi things, power walk like a mofo, resist any kind of contact.  So I just let her power walk and look around.  We would have some gallops and long trots.  I can take her anywhere too.  She is such an easy pony to deal with on so many levels accept contact. 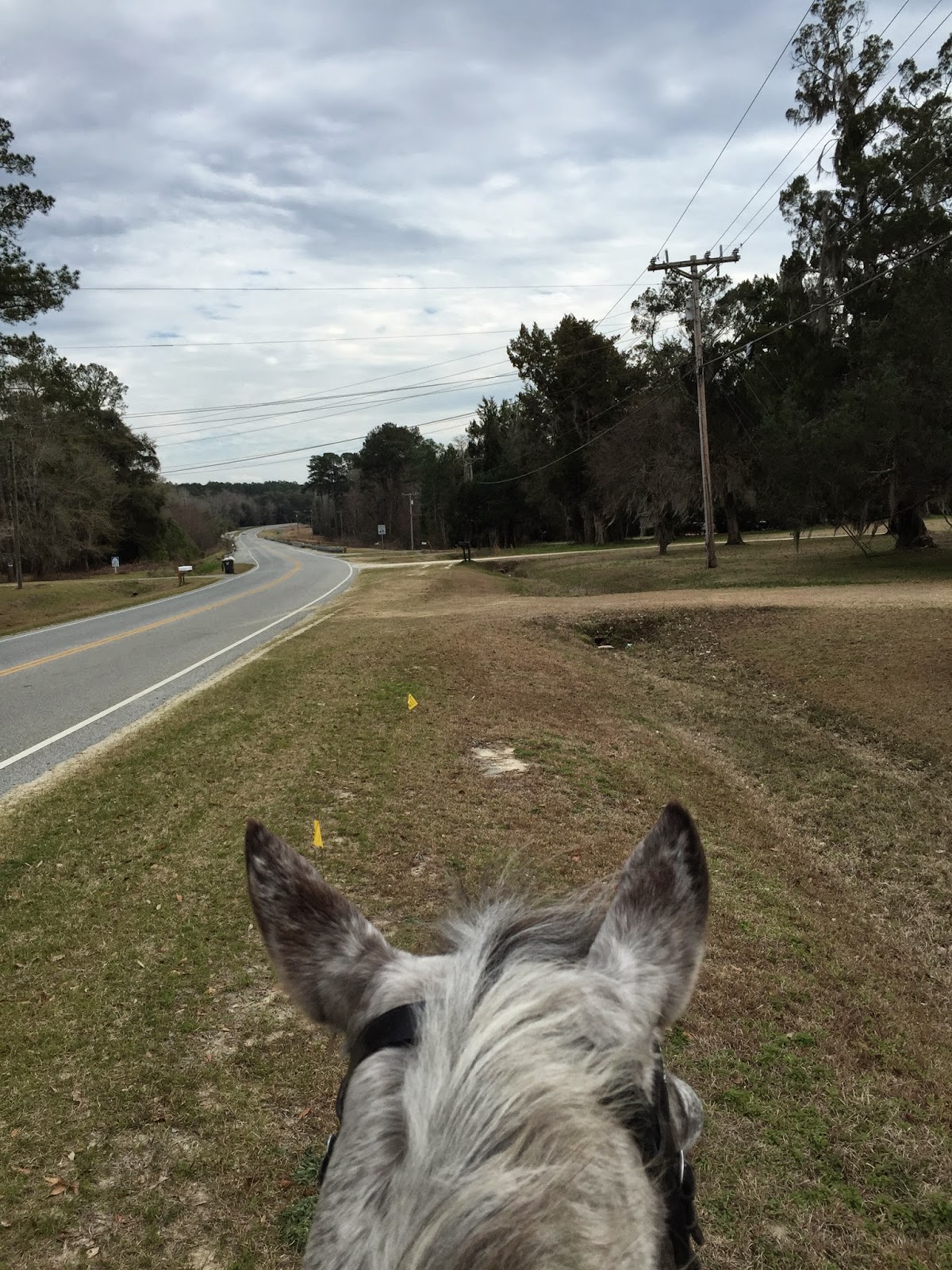 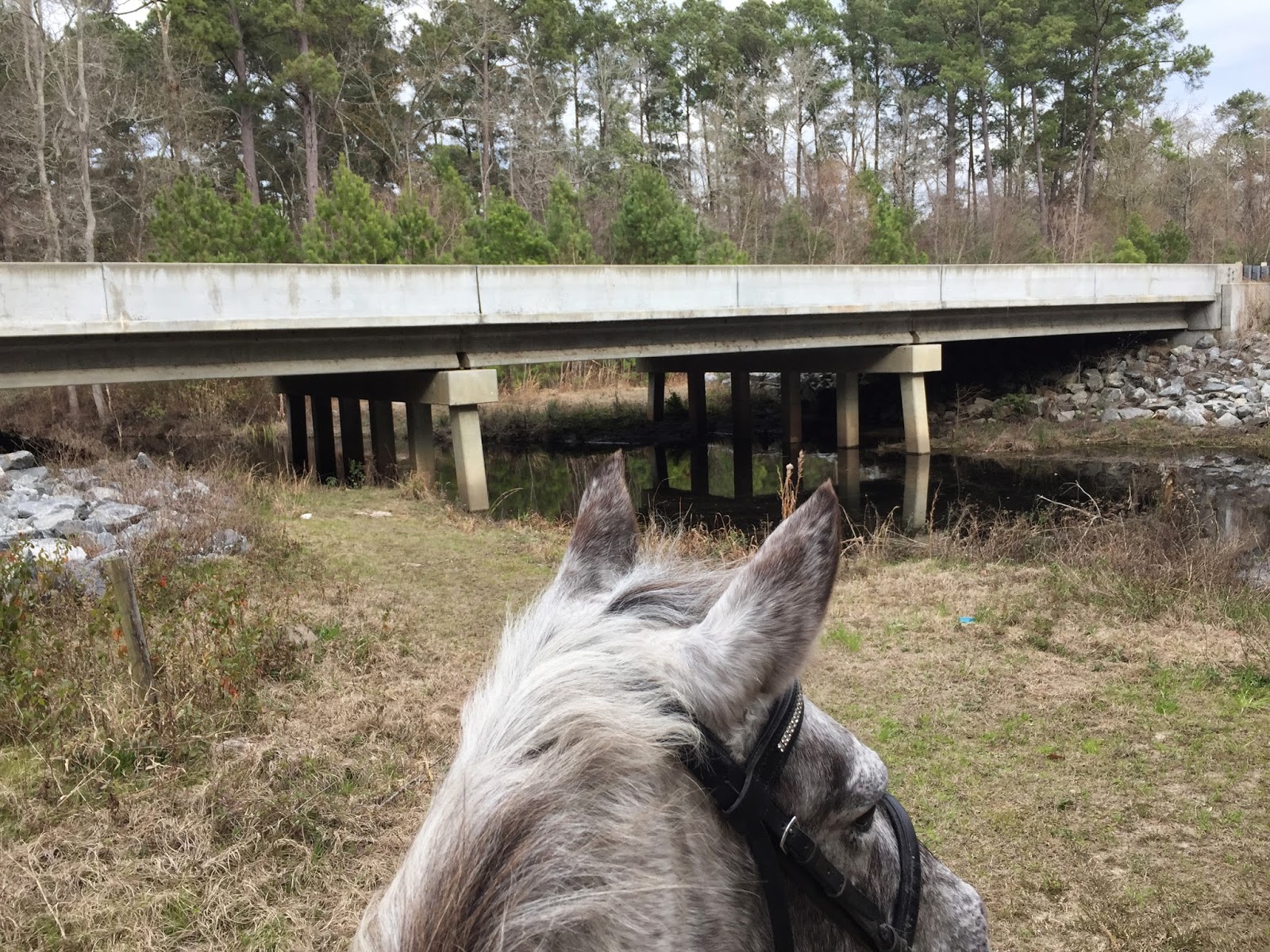 She's always up for hacking adventures. 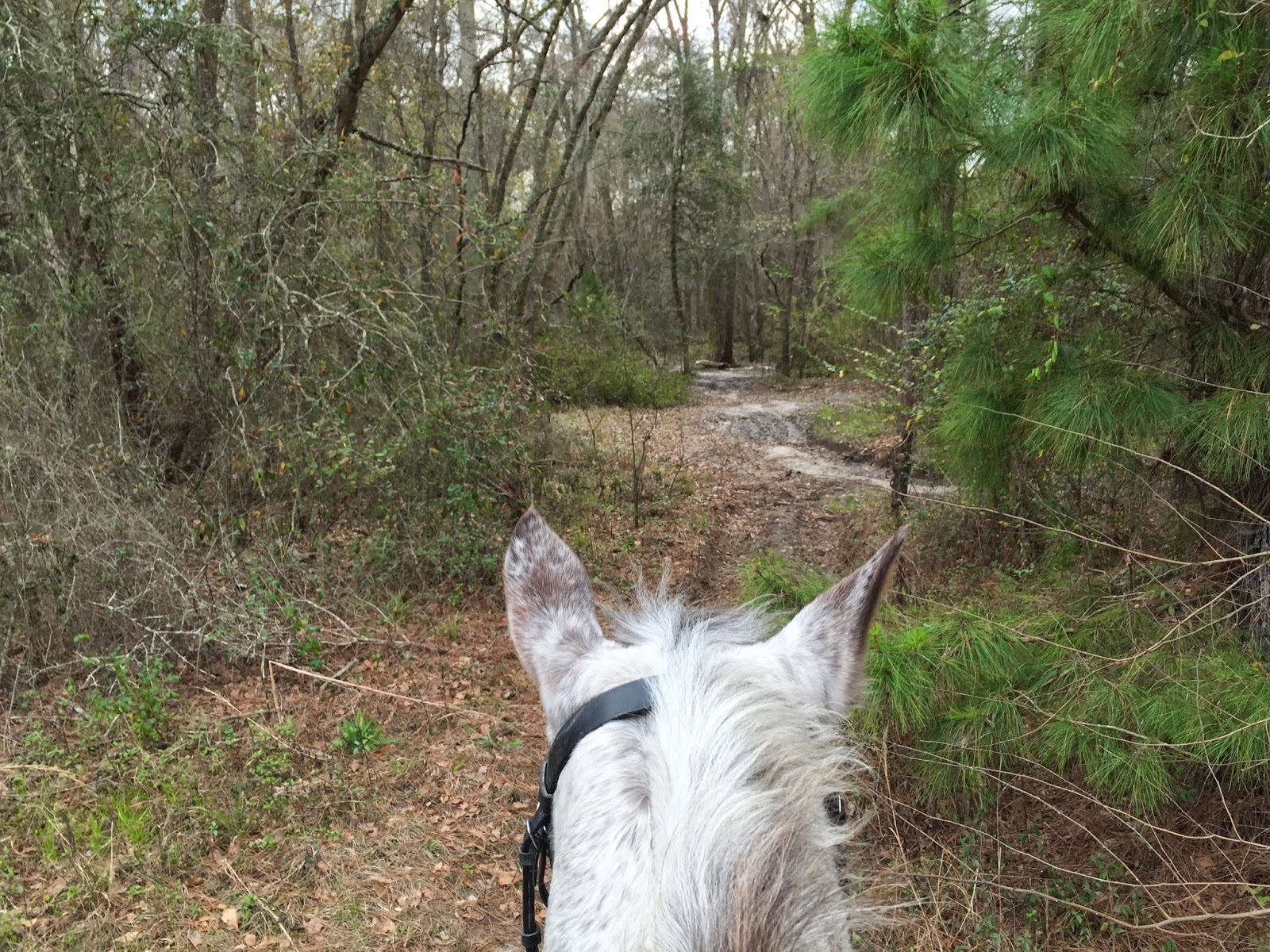 The other day we were out hacking around and I decided to try something different.  I took up some rein, gave her a super supportive outside rein and gently pushed her into the support.  When I squeezed the inside rein to ask for some flexion she fell in line.  I felt her lift her back.  At the walk.  Which was the worst gait to ask for anything.  I didn't believe it. I asked again, she responded perfectly again.  What the hell was happening?  It had to be a fluke.  There's no way.  Did I finally stumble upon another piece to my puzzle pony?

The next day I tried the same thing.  I had the Other Half take some pictures as proof. 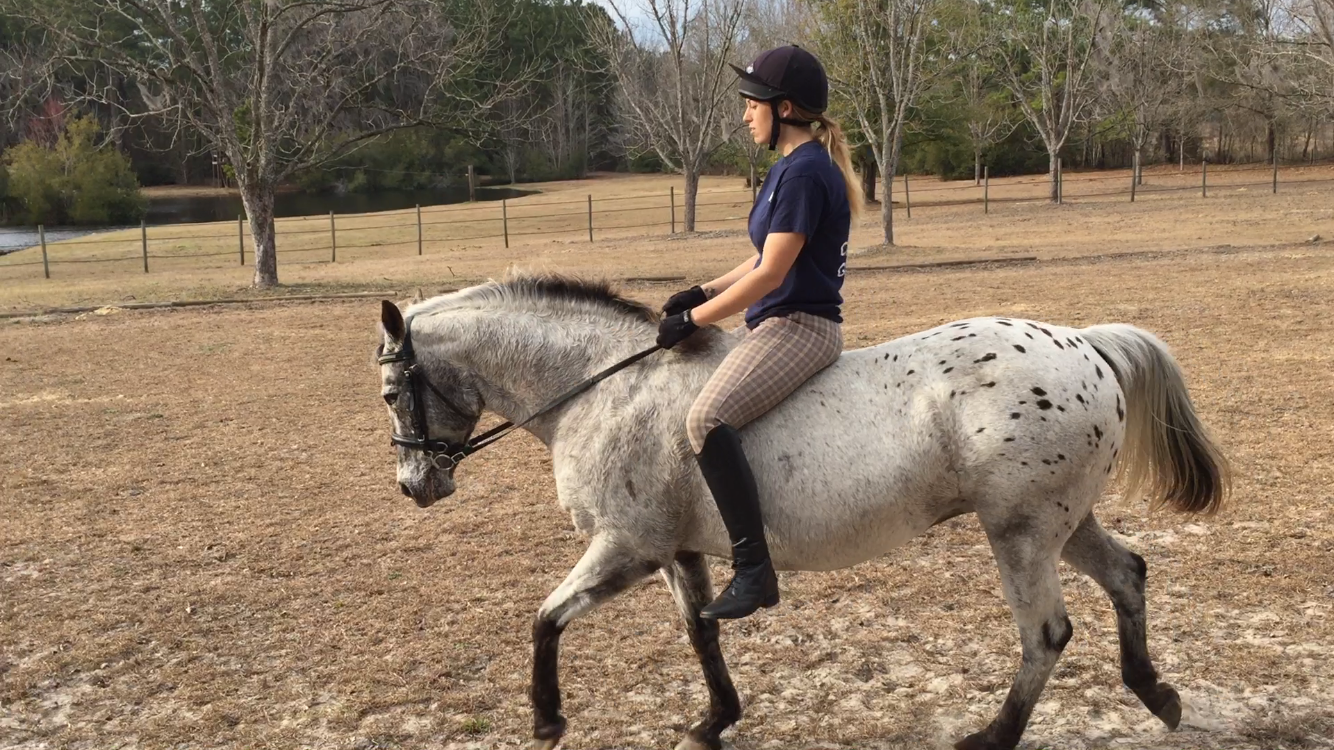 She did great.  I know that the supportive outside rein sounds extremely elementary but I ride two completely different horses.  Klein is so different than Mochs.  I know every horse is different, but I am so used to riding in my default Klein setting and it just doesn't work for Mochs.

This is exciting!  I have been saddle shopping all week for her and just put a bid in on a dressage saddle today.  I'll be babysitting that like a hawk.  I still want to event her.  I decided to go with a dressage saddle first for obvious reasons.  She has a lot of flat work to learn.  She has a lot of balance and muscle to gain.  I will casually be on the lookout for a jumping saddle for her.

Here is a few pics from this evening with a borrowed Isabell. 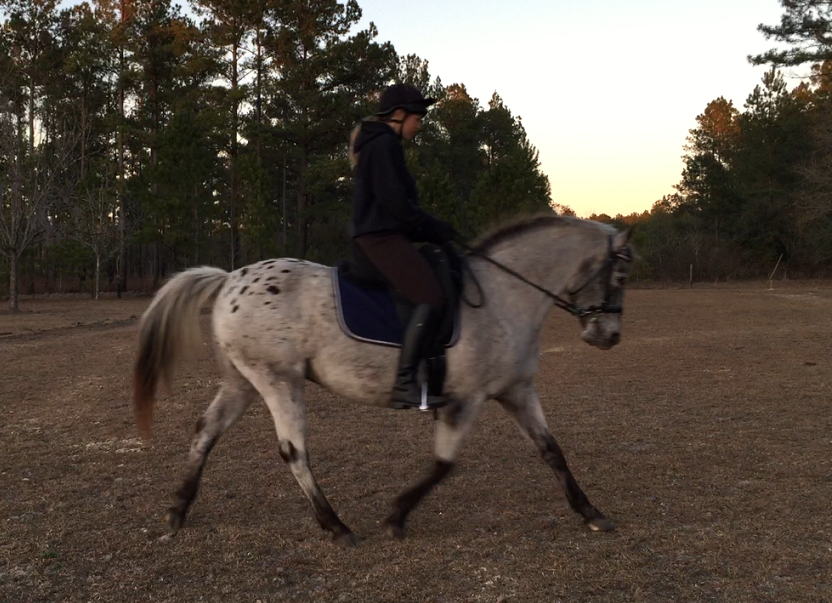 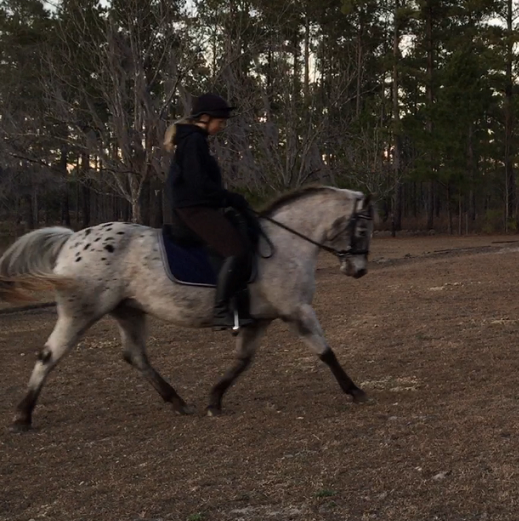 Oh Mochs.  I love this little pony for so many reasons.  Even though it's taken a while, what's the hurry?  Next step:  Buy saddle and begin putting a real fitness base on her and get her into some legit work.

P.S.  Klein is in heat today...soooooo I'm inclined to believe that was most likely a contributing factor to my last two posts.
Posted by The Jumping Percheron at 10:01 PM