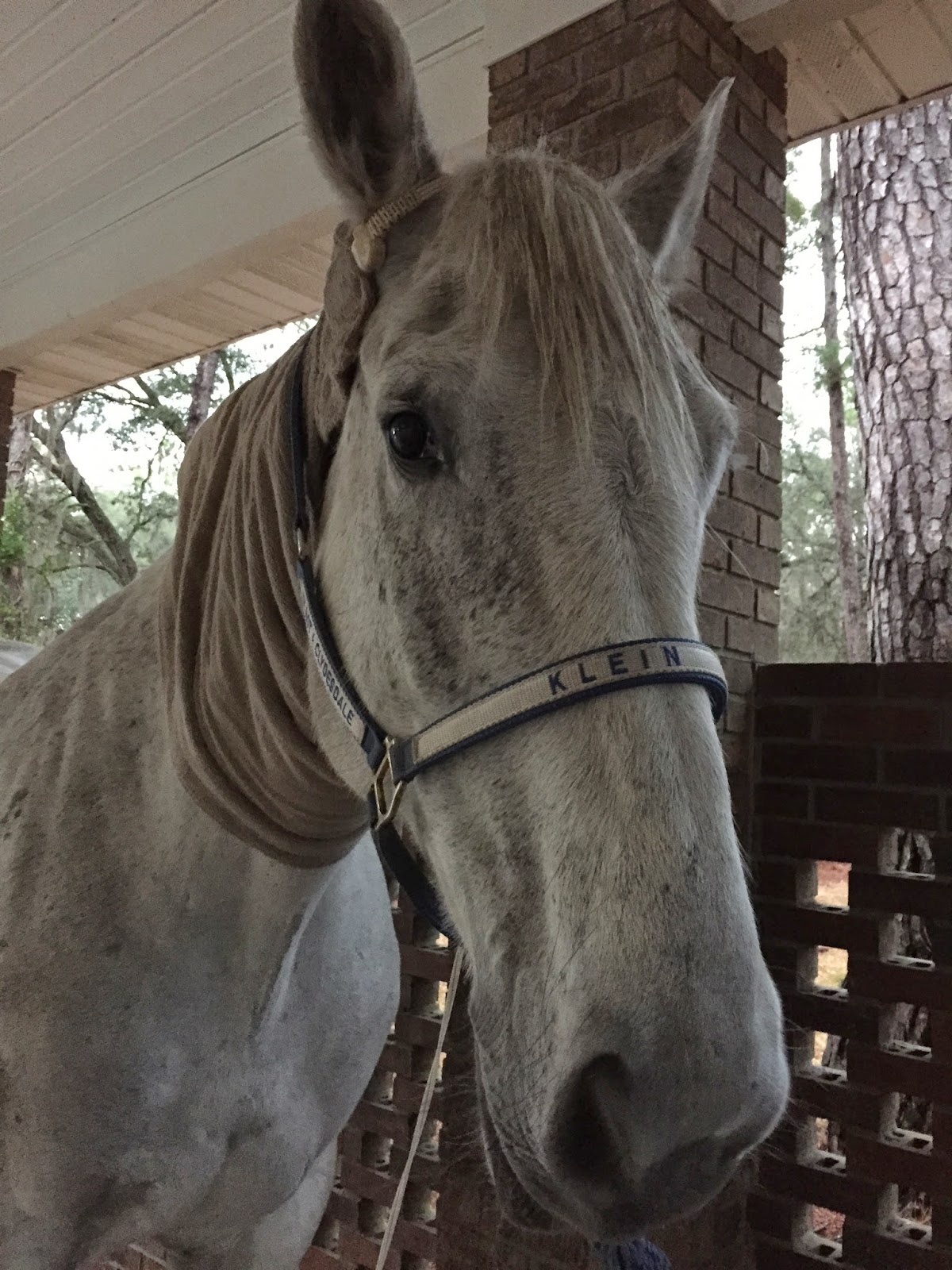 Klein with the electric blanket on her neck, aka getting ready for her neck to be massaged and adjusted.

Klein was adjusted/massaged today and nothing out of the ordinary presented itself.  She was pretty out of whack on her left side.  I would guess that is due to more of the shoulder-in/haunches-in work we have been doing to try to work on some left side stiffness.  The chiro said most likely that was the culprit of her left side being so tight, but to continue the work we are doing because eventually it's going to strengthen that side and supple it up.  Just think when you add some weight at the gym, or learn a new lift, of course you will be sore, until you build up some more strength. 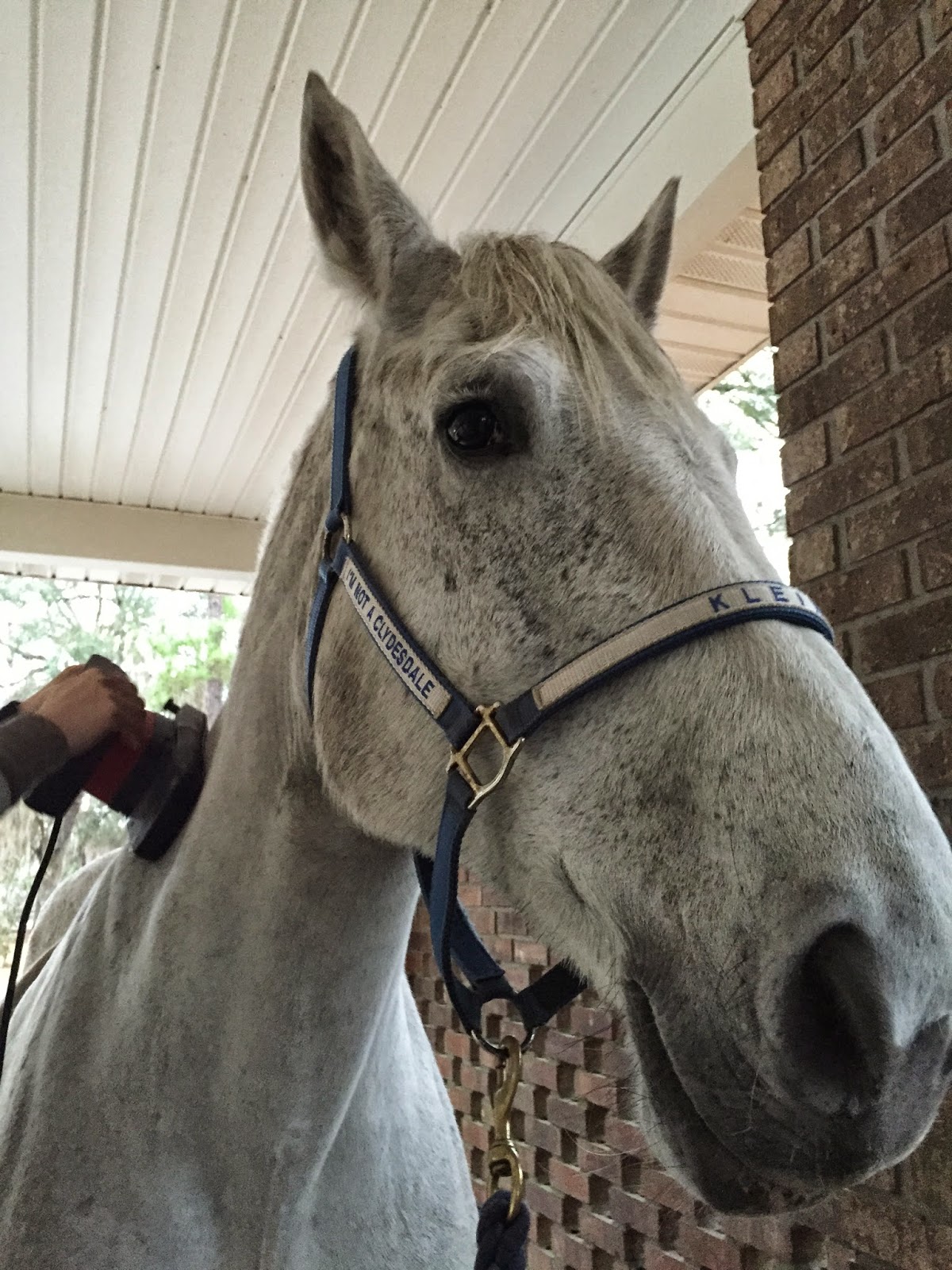 Part of her massage.  She had a good roll in wet sand before I brought her in.

Other than her left side being noticeably tighter than her right there was nothing indicating she is having any back soreness issues or saddle fit issues.  I'm still having the saddle fitter look at her saddles the next time she is out and re-flock where/if needed.

The chiro also said that some of her tight spots could also partly be due to all of the running around like a wild draft horse at the new barn.  This is the first time she has seen them at the new place.  They have been tearing around the new place much more than the previous barn.  Klein's in good shape right now, so it shouldn't tax her too much.  Actually the first day they were there Mochi and Wes were sweaty after a good gallop and Klein was just starting to get warm.  But, maybe she slipped during one of their frolicks?  I have seen it before.  I hate it when I see it but the two times I did see her slip and fall she bounced right back up like she hoped no one saw it.

Once was when she was four, in Hawaii, and right after a chiro adjustment (offff course)!!  She was squealing and bucking and just being a baby playing in her paddock when she lost her footing and fell smack on her right side.  It took a minute for my heart to restart again but she bounced back up like it never happened.  The other time the Other Half and I were watching the mares get stirred up over something at our previous barn here.  They all took off tearing around their pasture and Klein slipped and went down.

I have seen slide marks in the pasture at the current barn, but nothing to lead me to believe a horse fell there as well.  But, their pasture covers about 30 acres, so who knows.

The chiro promised she would tell me if there was something she found that I really should be concerned about, have the vet check out, give her time off, etc... etc...  She found nothing that warranted any concern and nothing that indicated any soreness beyond just a horse in regular work.

So what was up with her Saturday?  Maybe it was the missing half pad?  Maybe she just wasn't feeling it that day?  Maybe the left side stiffness was really beginning to bother her?

I am super relieved, and I am still giving her the rest of the week off, as I had originally planned to do last week.  Our big weekend plans are still on, and we'll be on our way to Orlando early Saturday morning.
Posted by The Jumping Percheron at 11:05 PM