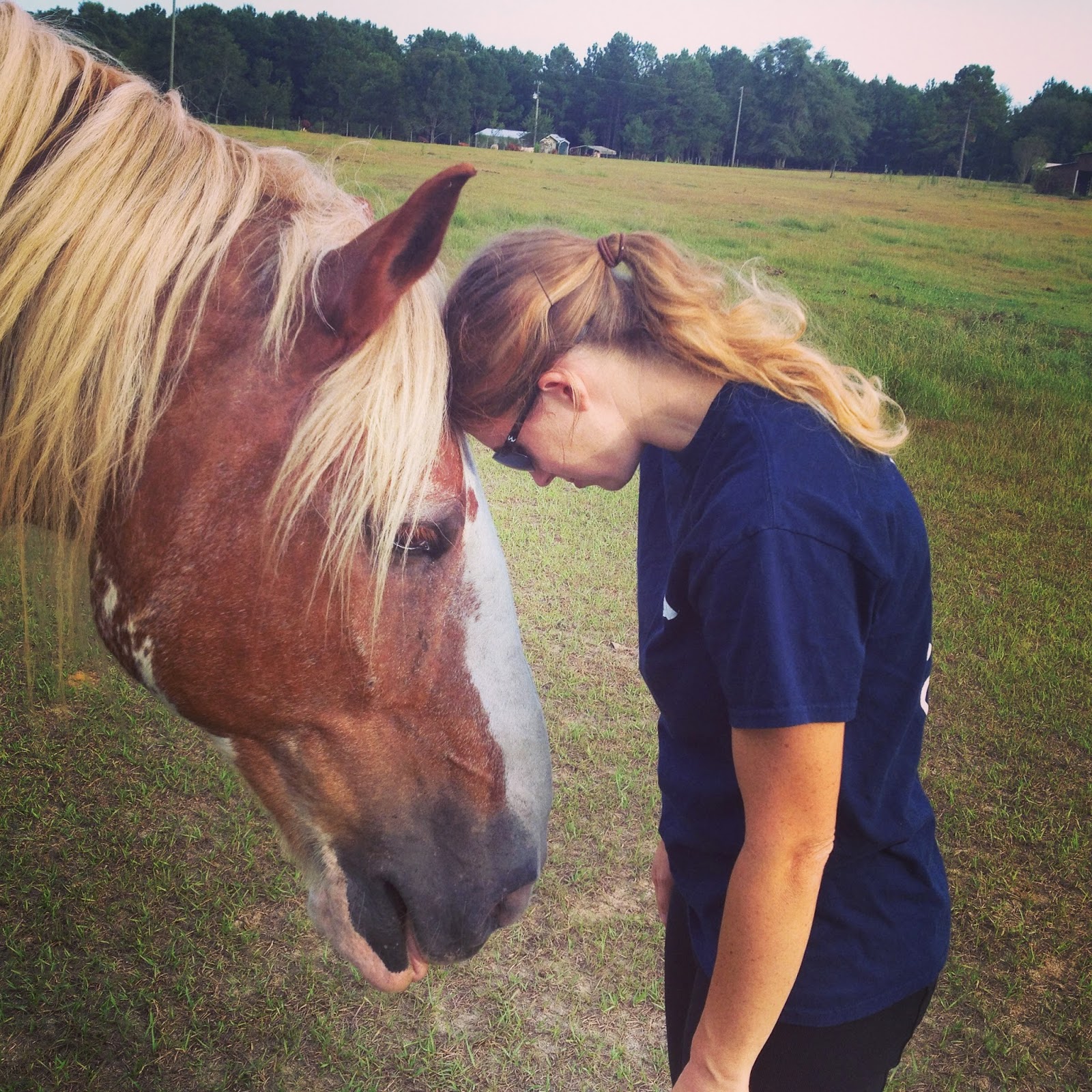 
It's coming up on seven months that Wes has been home, but it is STILL sinking in that he IS home, forever.  I think he might still be in a little bit of shock too.  Every time I am near his head he turns toward me and kind of nuzzles me.  I know he is still telling me how happy he is to be home. 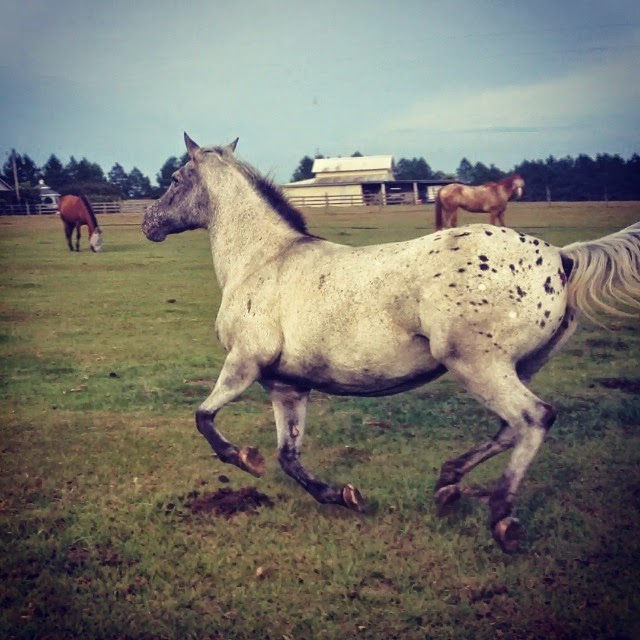 Mochi doing a fly by.

I really have only been riding Klein right now.  It has been so hot this month I have really had to be specific with riding as far as when I am going to ride.  In the mornings, sure it's cooler but this is South Georgia people.  It will be 6:30am and 75 degrees but...89% humidity.  That's a heat stress index of 164 already, meaning pony natural cooling systems are already at a disadvantage.  When I ride in the mornings, by the time I get done with Klein it's already so hot there is just no sense in making a horse work for any amount.  Then in the evenings it takes so long to cool off that you pretty much have to wait until the last hour of sunlight to get a ride in so that it will be half way decent.  I'm not complaining though.  I'd rather deal with this for a month and a half than live somewhere that it snows.

It's been so hot that I haven't even hauled anywhere in a while because I think it's just mean to haul them in this kind of heat and humidity.  The only exception would be some kind of medical emergency where I had no choice.  This weather is why I went on what turned out to be a three month search when I was shopping for my trailer.  I ended up finding my trailer in Connecticut and having it shipped down here to me.  Sad I couldn't find what I wanted when we live so close to Ocala, huh?  Anyway, I would accept nothing less than the trailer I bought because of all the air flow options it has.  Even with that, hauling right now would just be blasting them in the face with hot air.  It would be like being in a convection oven. 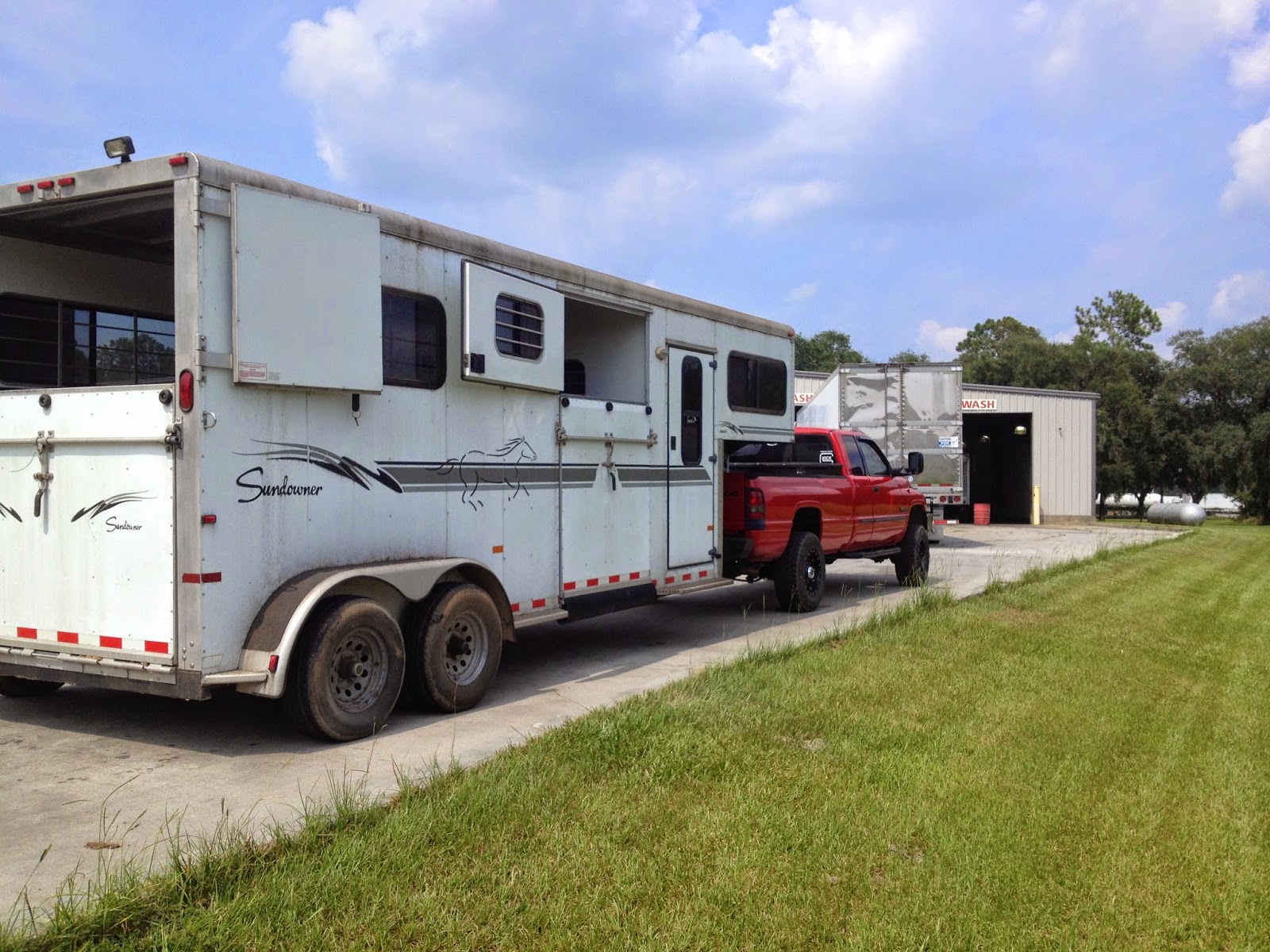 This is an embarrassing picture because of how dirty my trailer was, but this picture WAS taken while waiting in line at the truck wash.  I posted this because you can see how the dutch doors on the back latch open, as well as the door over the side ramp.  So, you can see how much air flow my trailer has. 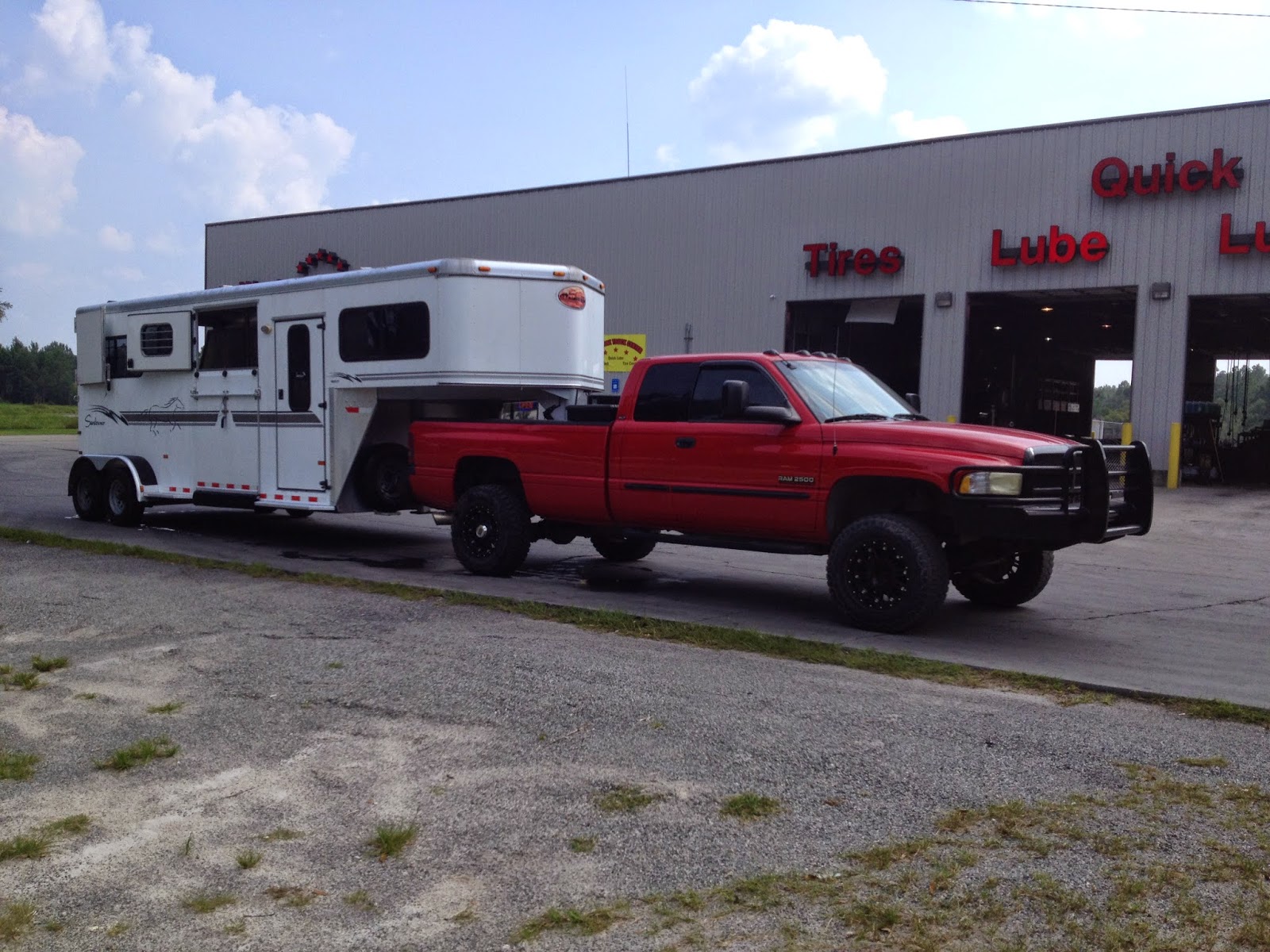 No matter how early I would get up there is just no way to avoid the heat hauling home.  I'm not doing that to them.  I see people hauling horses during the day right now and I just hope that they are only hauling locally across town, if not, they are aholes.

Another reason I am so strict with watching the temperature and their workouts is because I treat them like I treat myself.  Would I want to go do a WOD at Crossfit in those temps?  No.  There's no AC at Crossfit...on purpose, because Crossfit isn't for babies, but that's a completely different topic.  I go early in the morning to avoid the summer heat and it's STILL like working out in a sauna most times and the sun isn't even up yet.  I mean seriously, would you want to go run during the hottest parts of the day?  No.  Then WHY would you make your horse do it?  They are not pieces of equipment, they are your partners.

On mornings that are already high in the humidity Klein and I work on lateral movement or just walk trot or her halts or something else at low speed/intensity.  We don't work above short trots.  Sweat doesn't evaporate in humidity, so basically they are being insulated by it, so you really have to be careful. 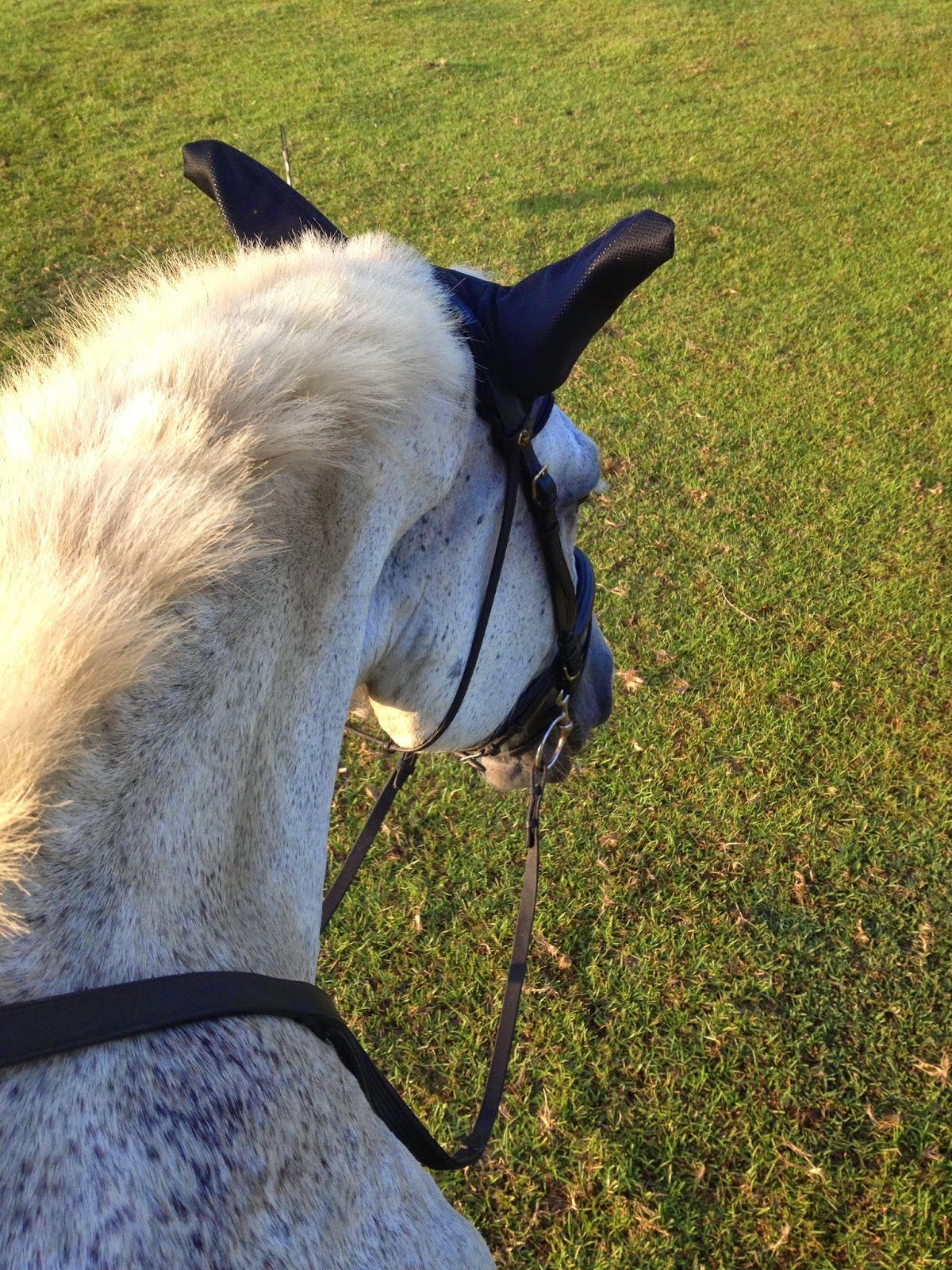 Stretching during our warm up. 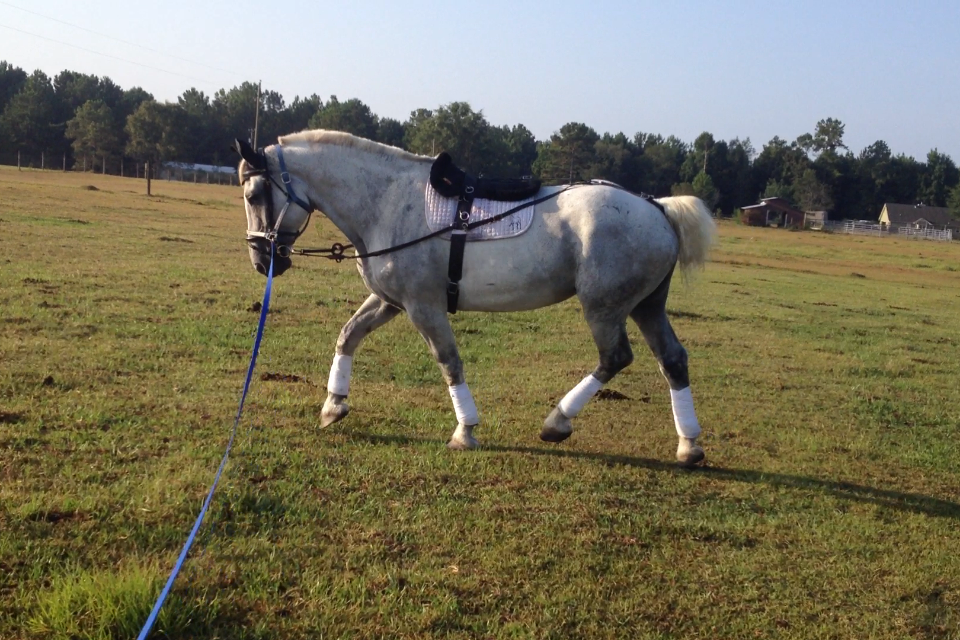 On the lunge line one morning.

We did have one little break in the weather this week.  One evening it was noticeably cooler and MUCH more dry out and there was a beautiful breeze.  So we took advantage of that and got some jump schooling in. 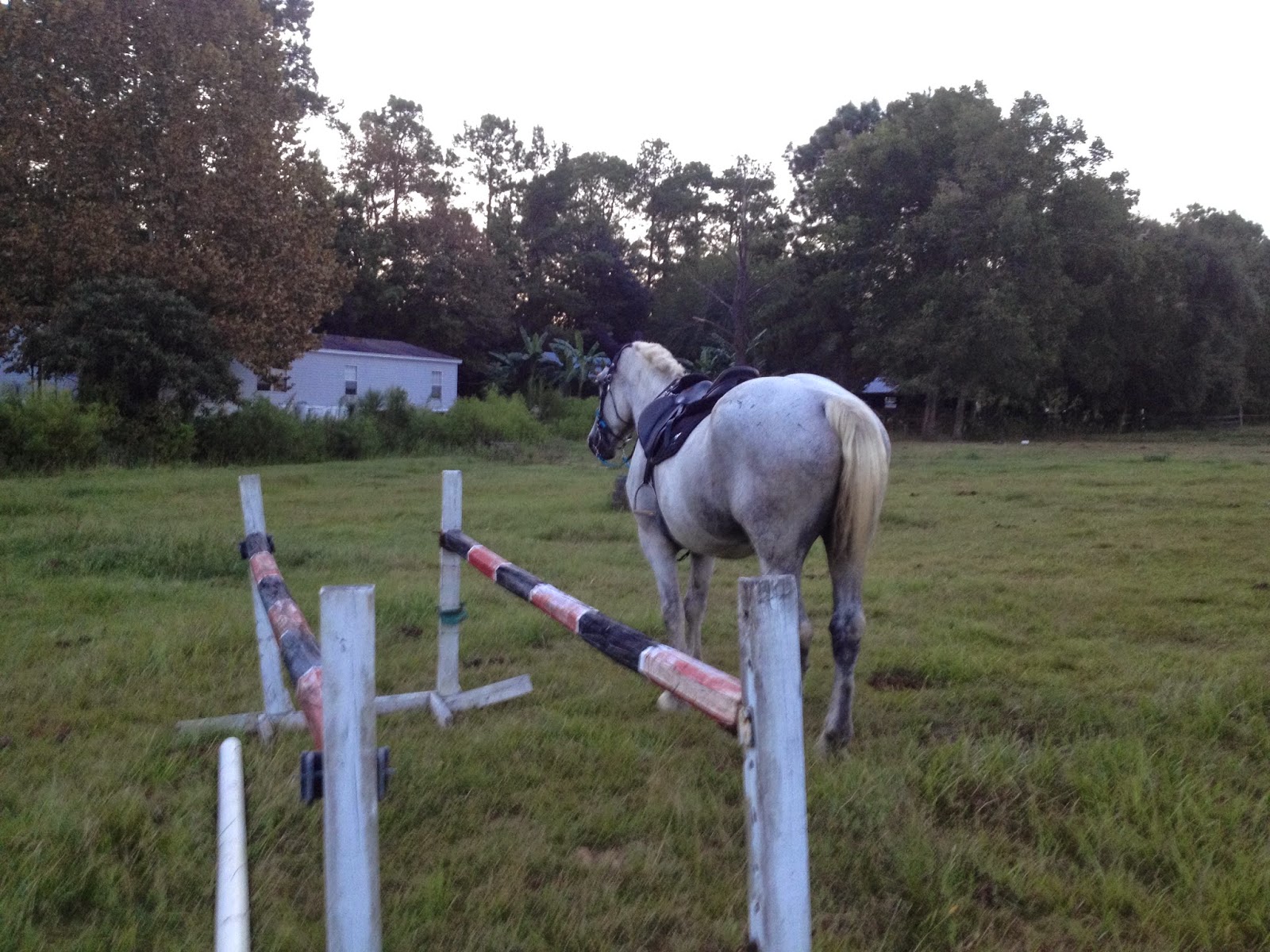 Waiting for me to raise the jumps that evening, trying to get as much work in before our light disappeared.

Klein was galloping around the pasture when I got there that evening so I knew she was approving of the break in the weather.  She did not have walk in her vocabulary that evening.  It was pretty funny actually.  You can't blame the girl for enjoying nice weather.  3'3" might as well have been cross rails for her that evening.  3'3" isn't a big task for her in the first place, but she was just being such a handful she was getting a bit sloppy (as she does with cross rails, or anything under 3' because she acts like it's offensive to her).  She wasn't touching anything, I could just feel her jump a little flat at times.  Usually she is pretty point and shoot, but that evening I had to really ride every stride to every fence to keep her organized.

This morning I wanted to get her out for a legit conditioning ride because we had a much cooler morning at 65 degrees this morning.  The humidity was still up but the heat stress index was low because of the temp being significantly lower than usual.  We had to take advantage of this rare August morning.  I also had to get out there extra early today because we were going ring shopping in Tallahassee! 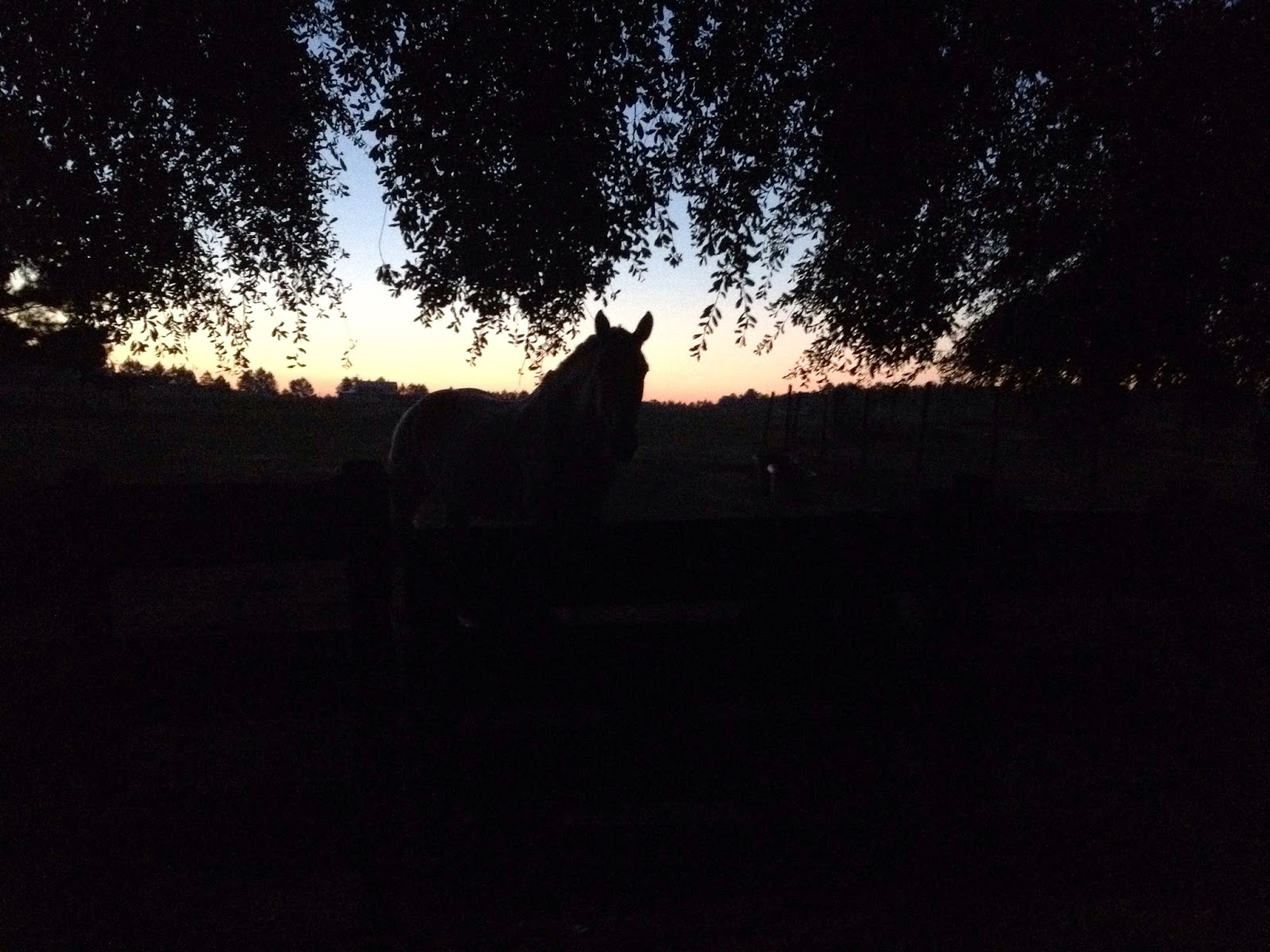 Klein baby waiting for me at the gate this morning when I got to the barn. 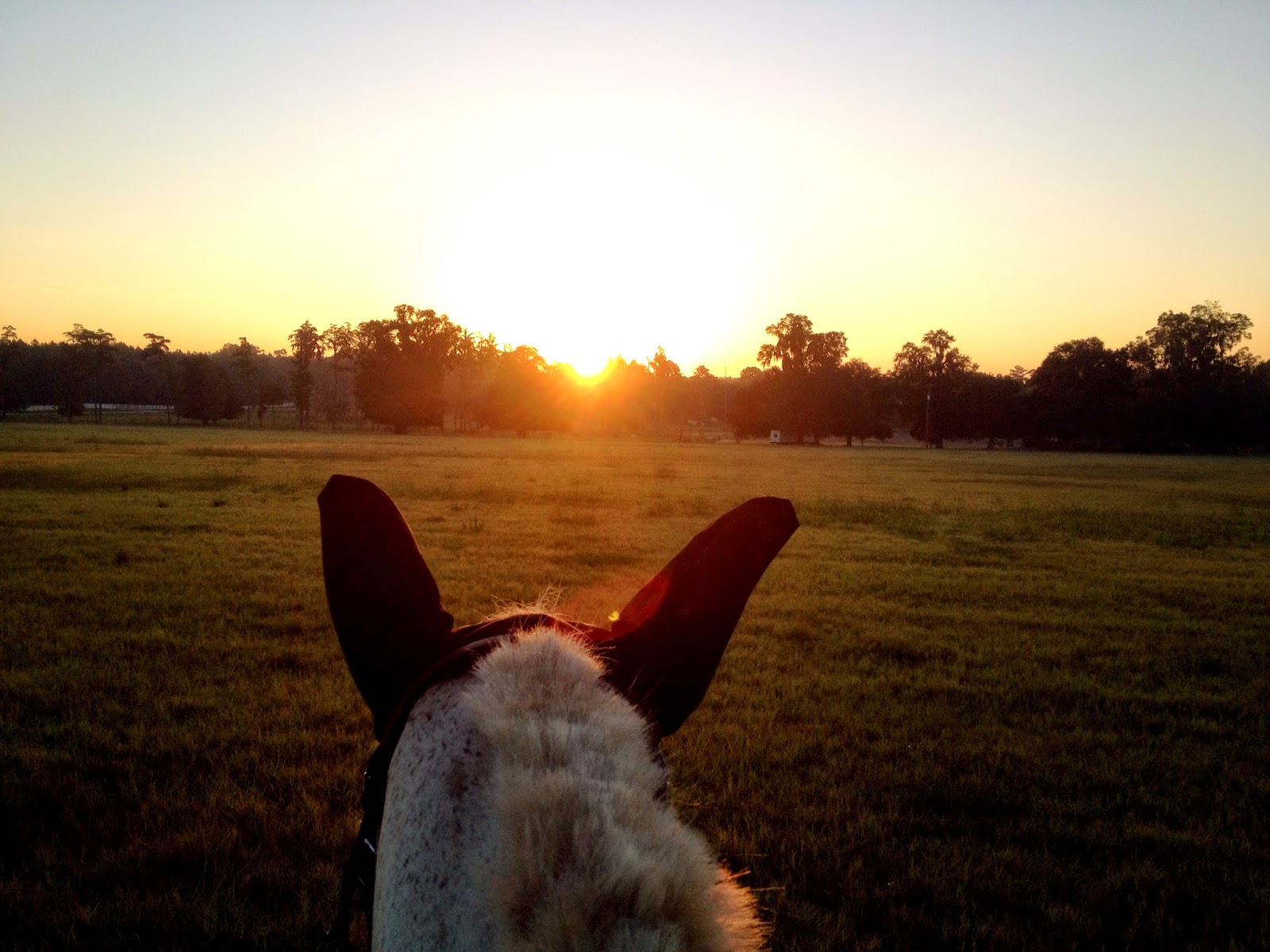 Sunrise with my Klein baby. 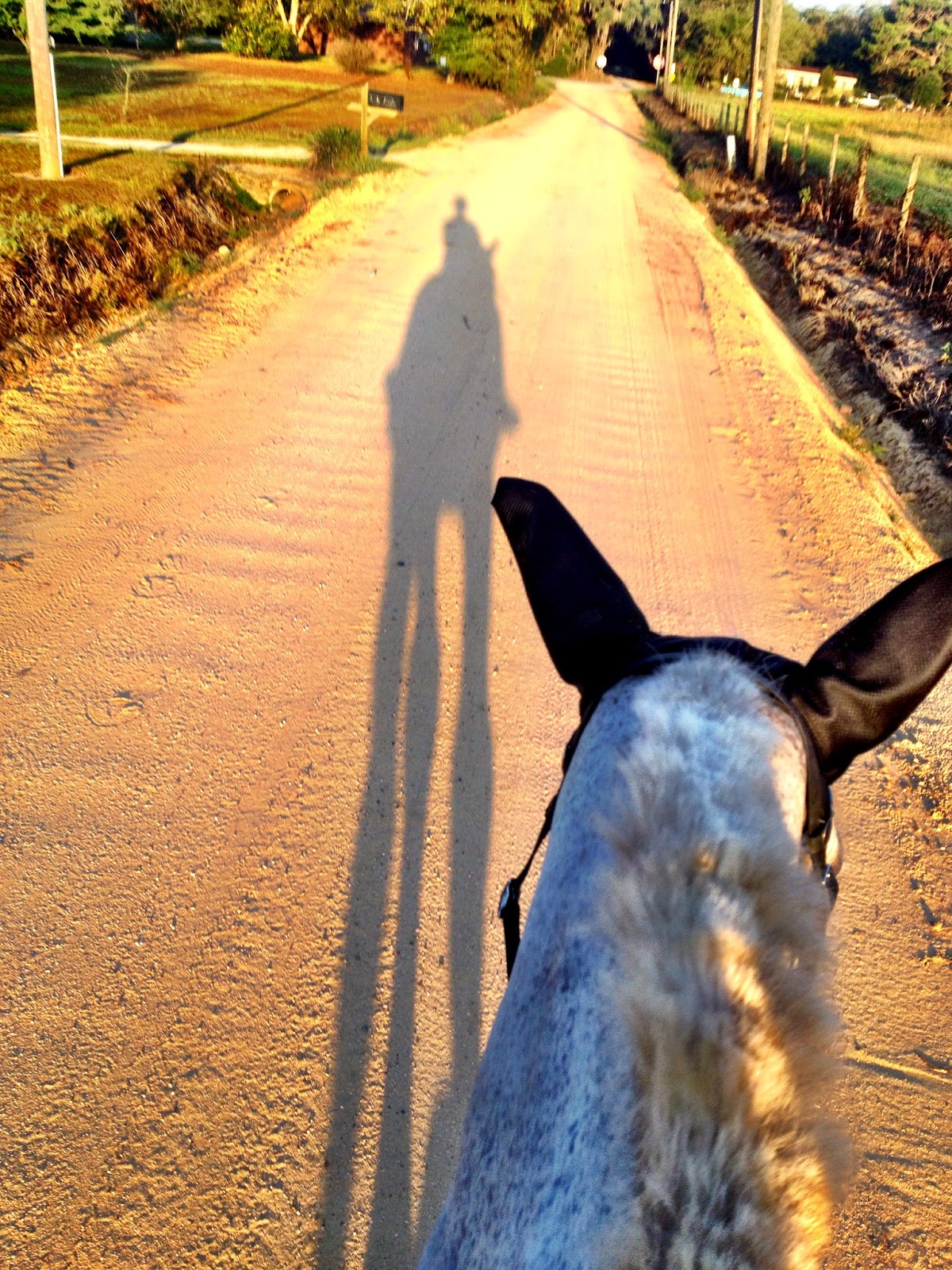 Cooling out on our walk home.

We put in a good workout this morning before the heat started. 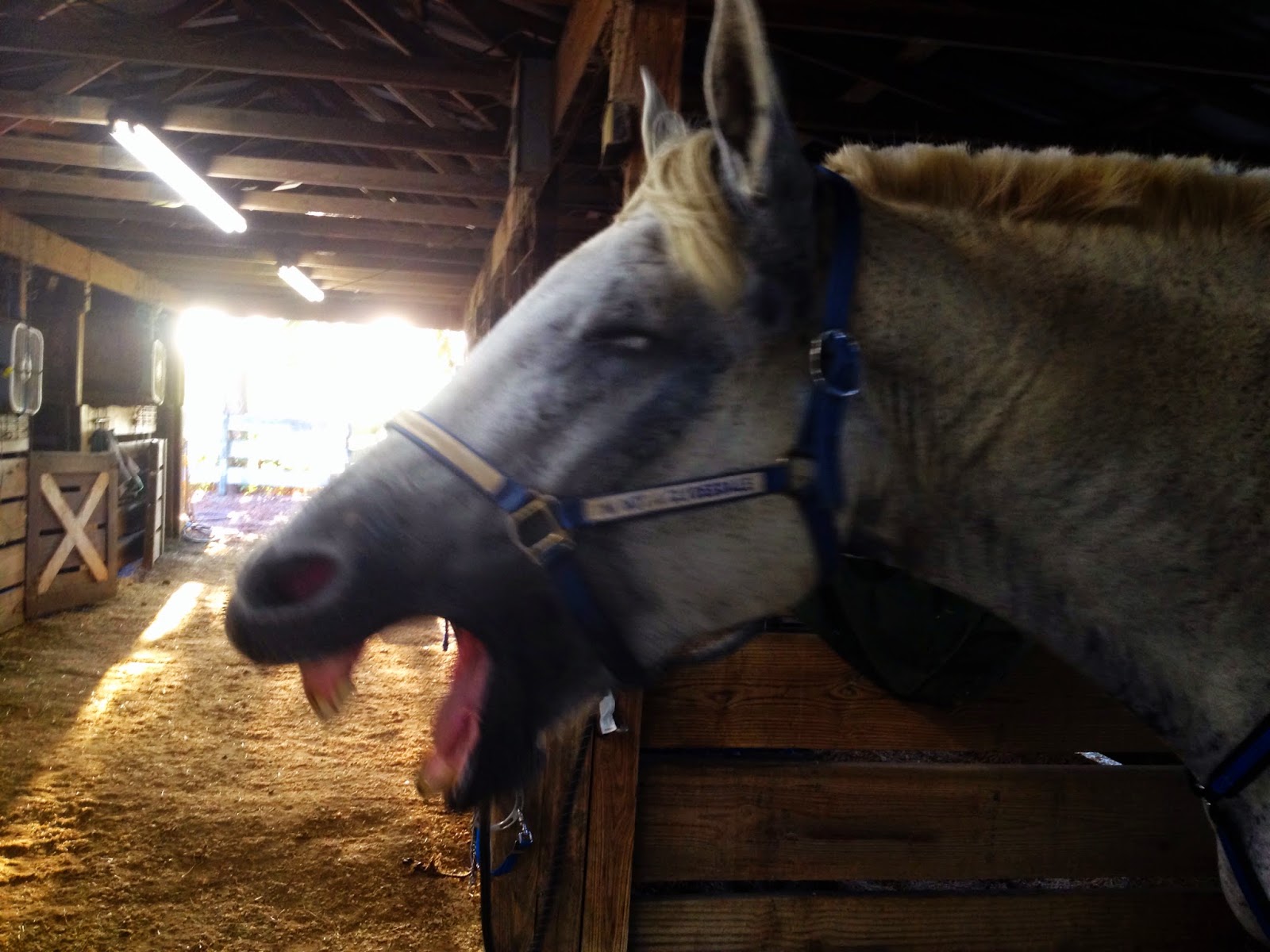 Happy yawns after our ride.  This girl is always happiest after a workout. 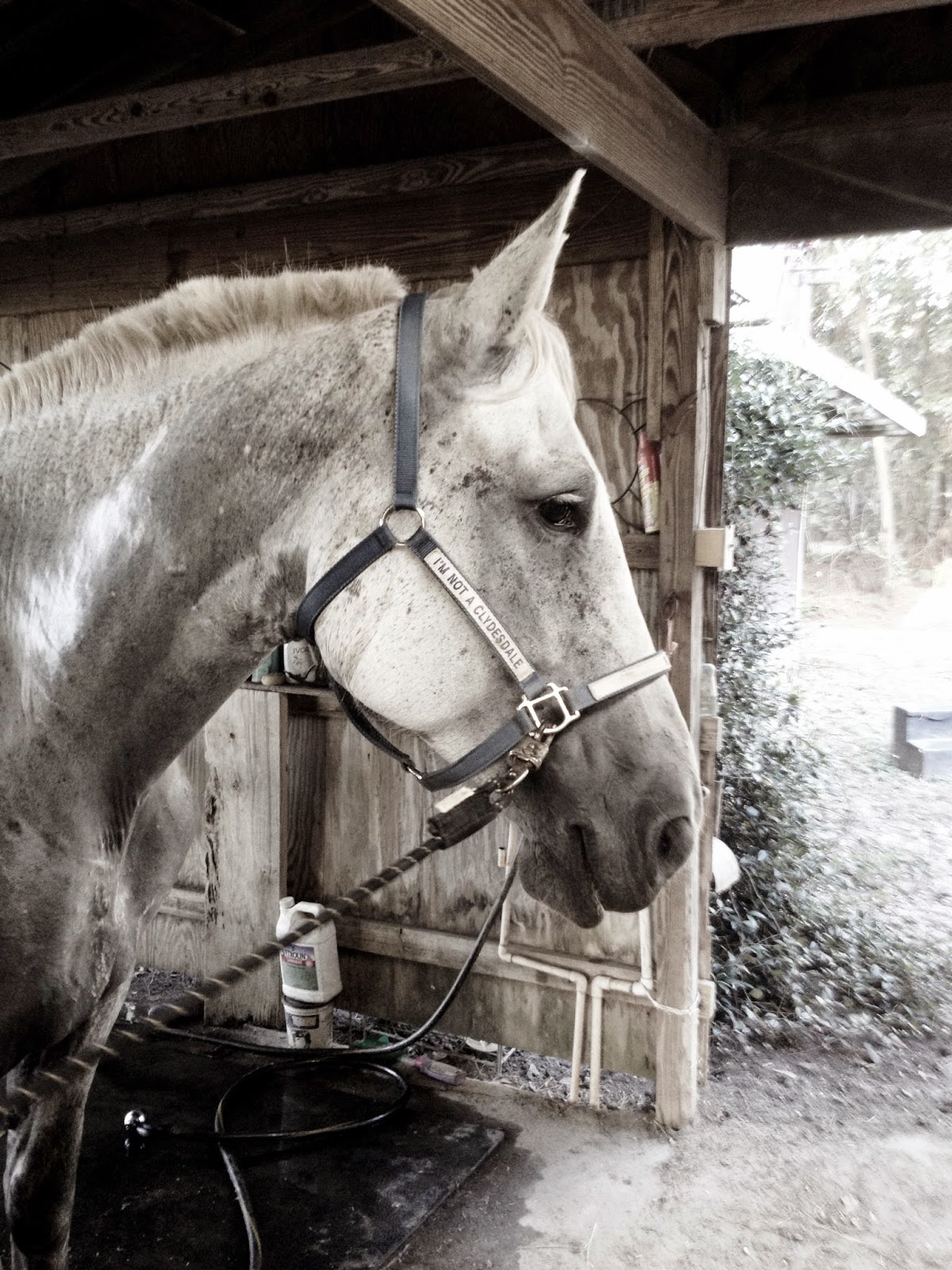 *le sigh*  I never, EVER get tired of taking pictures of my princess. 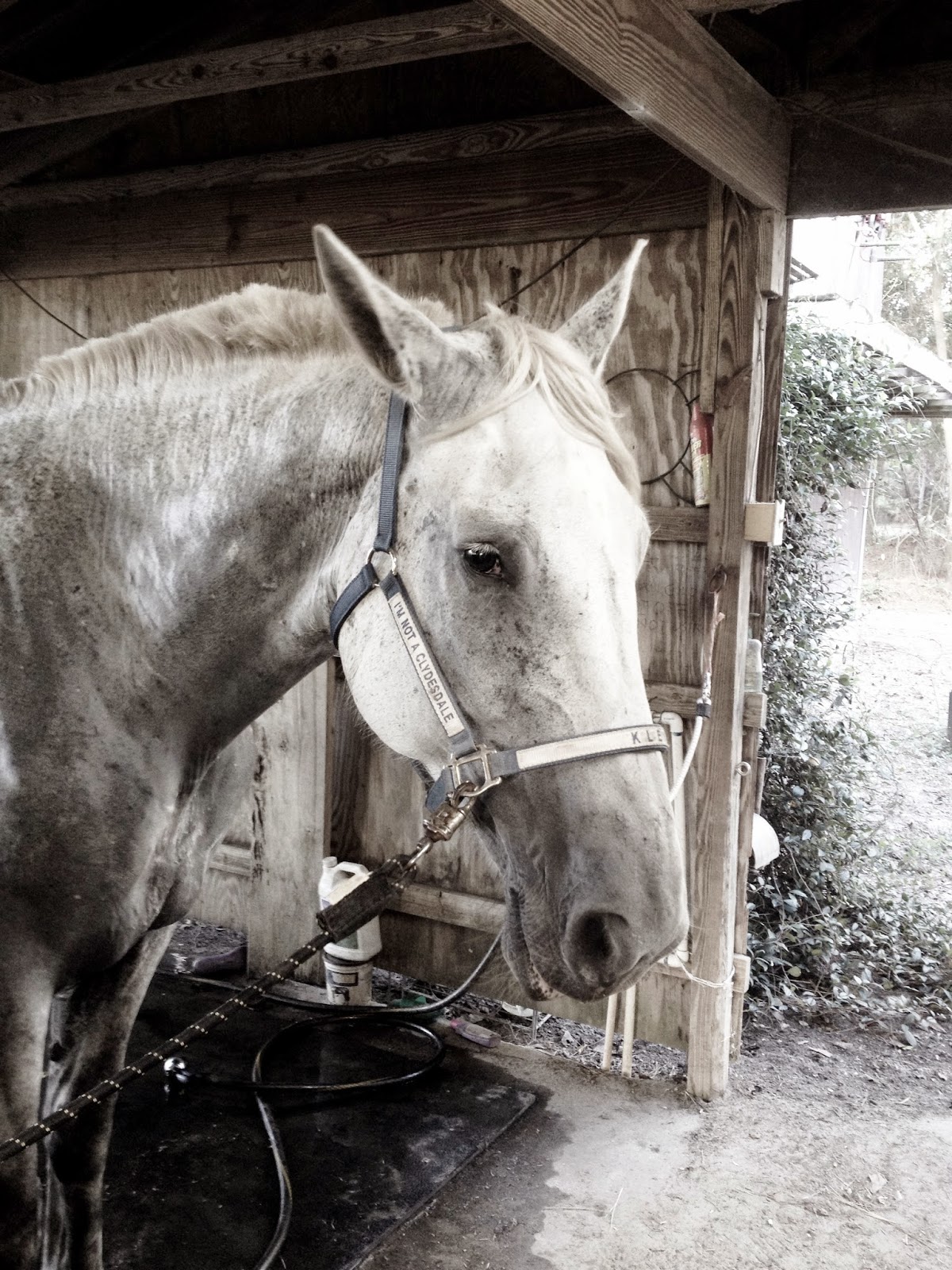 My Beauty Queen.
Posted by The Jumping Percheron at 9:16 PM