I say stupid human tricks because of the things horses put up with.  They have their own silly games but we have equally as many and our horses humor us. 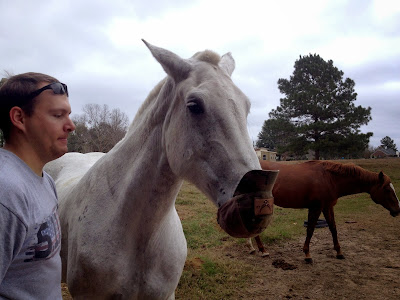 And, by the way, the above picture is really telling because Klein has a short amount of patience with anyone but me.  But check her out...She lets the other half do whatever he wants and she acknowledges his existence and actually playfully INTERACTS with him.  That's very unusual for her.  It's safe to say she has found another human she approves of.

I turned my boyfriend out with the rest of the herd the other morning... 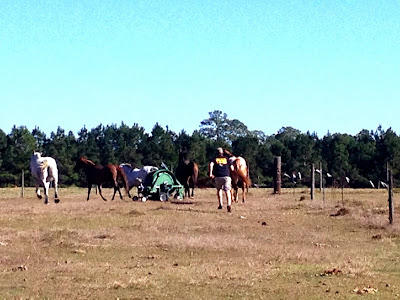 The Odd Couple have decided they like Chex Mix: 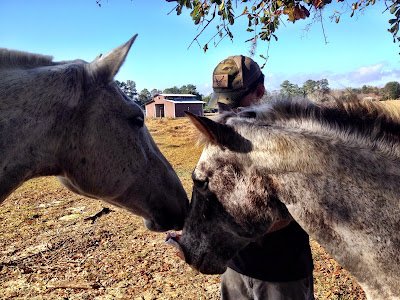 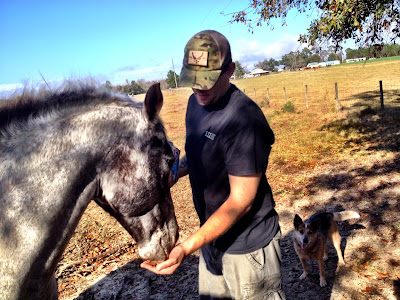 Moch cracks me up!  Watch her chase my boyfriend because he has a bag of Chex Mix:  http://youtu.be/9XyC2lzFsG0

Both of the ponies got a pedicure the other week and this is one of Klein's tricks that never fails to impress me.  She's done this with every trimmer we've had.  Her feet will manage to find the hoof stand no matter what. 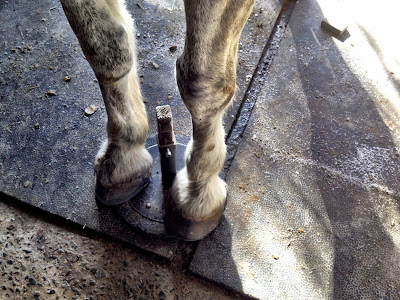 The Bring Wes Home! page is up to $725!  That is pretty amazing if you ask me.  Lately I'll catch myself standing in the barn aisle and thinking "WES is really going to be standing here in just over a month?!?!  That's insane."  It just doesn't seem real yet.  I've waited over seven years for that boy. 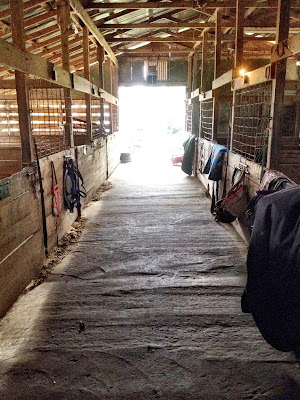 On the old blog you guys all knew what a big advocate of rider fitness I am, so that's why CrossFit things will show up here and there in posts.  I finally ripped my hands at CrossFit two weeks ago.  That week was INCREDIBLY painful.  I had a hard time even picking hooves or putting a halter on.  We did "Daniel" that day and it was:

So, if you're good at math that totals 100 pull-ups.  No big deal, just partition them as needed when you get to them and you'll be fine.  Bite size pieces right?  Yeah, until on the 90th pull-up I felt my right hand slip and knew something bad just happened.  I kept going to 94 then dropped off the bar to look at my hands.  I tore both of them.  I wish I would have felt a warning sign but they honestly felt 100% until I felt the right one slip.  I tore that one in two places and I tore my left hand in one place.  Ripping your hands is when you get blisters and they rip open because you don't stop.  Well, I finished my 100 because I'd be kicking myself all day if I didn't complete a WOD.  I can take a beating and I'd have to break something or get knocked out before I would quit.  Besides, the damage was done to my hands.  They hurt SO bad the rest of the week that the first two days the wind blowing across my hands hurt.  Then when they start to dry you can't open your hands all the way because they're so tight, then they crack anyway again and hurt some more.  It was NO FUN. 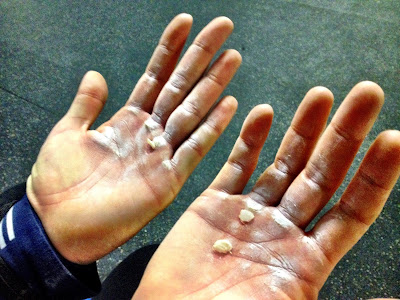 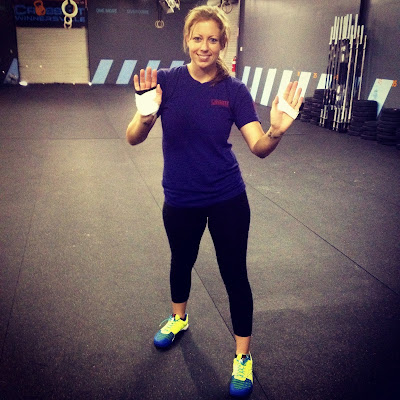 A week later and one of my coaches had to pretty much make me mittens out of tape so I could complete that day's pull-ups.

Meh, it happens.  You can find a billion pictures of CrossFitters that have ripped their hands.  People say "Oh, you're crazy...you just don't know when to quit, what's wrong with you?" and other things to that affect but, in case you don't know, these workouts are named after service members that have paid the ultimate price.  Sometimes it makes you want to tear up reading the little excerpts of what happened to them on the CrossFit main site.  Our coaches will read them to us right before we do the workout and it gives you that little extra motivation to, no matter how challenging or massive the WOD may be, stuff your complaints and just do the WOD.  These workouts are dedicated to them, named after them.  Being an active duty Air Force member, these people are my brothers and sisters in arms and I can take some torn hands in honor of their sacrifice.

Oh...and besides, how many time has someone said something to you about being crazy for riding horses because they have a mind of their own and could kill us with one well aimed kick or buck?  See, same same!
Posted by The Jumping Percheron at 3:54 PM