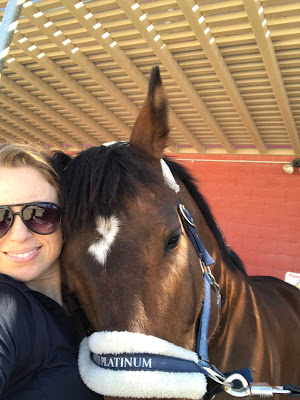 Super B continues to progress like I thought she would now that we have our consistency back that was so rudely interrupted by the north east.  The real Super B is still coming out and she is still everything I knew she was from the first time.  Keeping her on the flat for the majority of the past year is starting to show just how valuable that plan was.  I have let her tell me when she's ready for stuff and I feel like she's clearly letting me know lately that she's ready to level up.

Lately I have been adding in ground rails, tiny cross rails, and cavaletti.  Things make SO much sense to her now.  Where before she would just kind of throw herself over stuff because she knew that is what the end goal was, she is now jumping with actual form and has a round jump with a powerful push off the ground.  She easily gets her distances and there is NO drama before ground rails or jumps.  Yes, she used to even throw her head in the air approaching ground rails at the trot or canter.  No more.  In fact, she has been SO good the past couple weeks I honestly forgot she ever even had that habit. 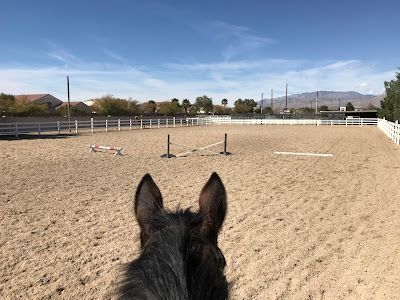 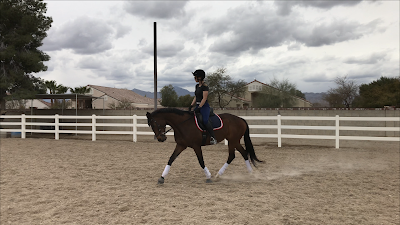 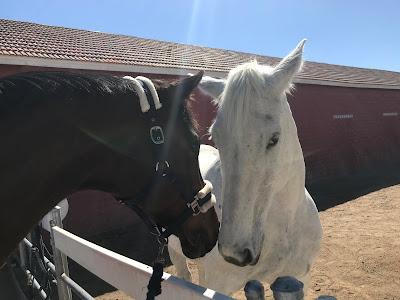 A very rare sighting of TWO unicorns!  Klein has always approved of her, like she was always supposed to be one of us.

Even in the round pen she continues to find what her body is truly capable of.  She is also starting to canter without her head in the air on or off the lunge line, with nothing on.  Everything seems to make more sense to her by the day. 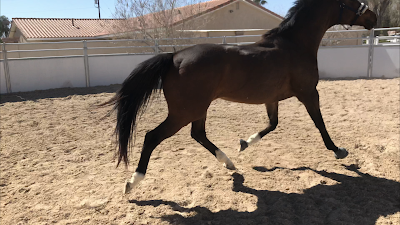 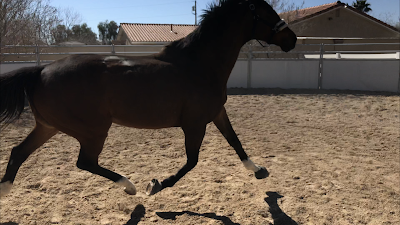 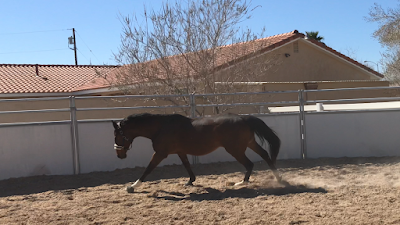 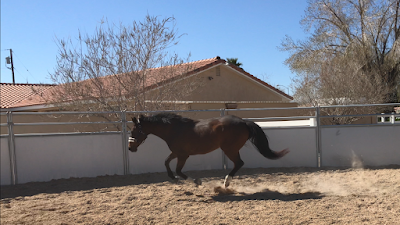 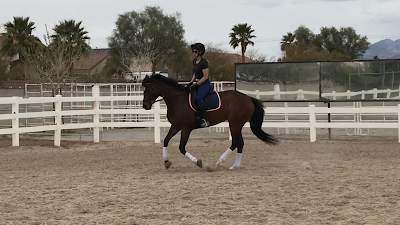 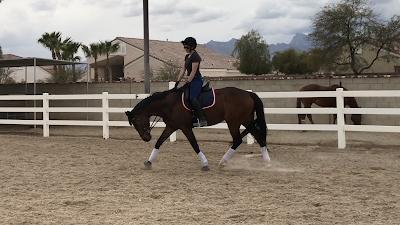 She has totally grasped the concept of stretching. 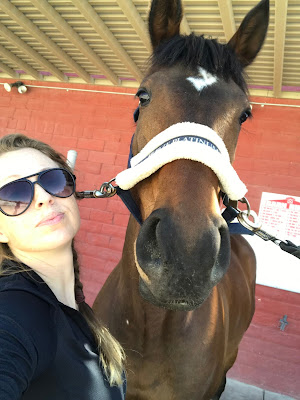 
She is making corrections and throwing in auto changes where necessary, she also is brave and confident to everything where as months ago you could feel a slight bit of conflict in her.  She WANTED to do whatever I asked because she trusts me but she still had just a slight bit of hesitation coming to some things because she just didn't know what exactly her new job was all about.  Now?  The other day we got an odd distance after coming around a corner and she kept the commitment and went.  I have been beyond proud of her lately. 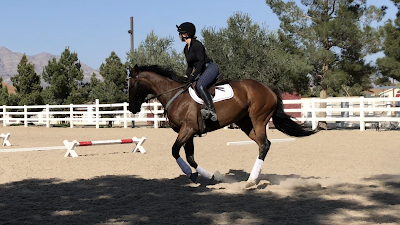 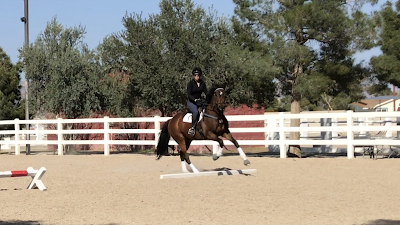 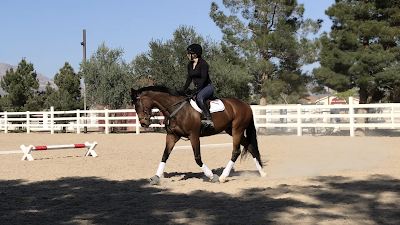 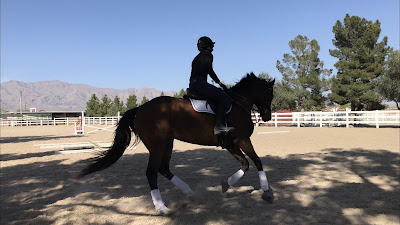 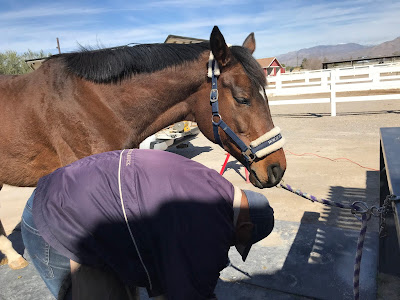 Falling asleep during her pedicure. 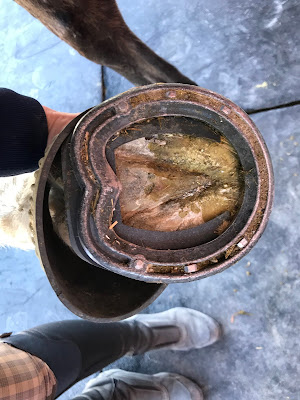 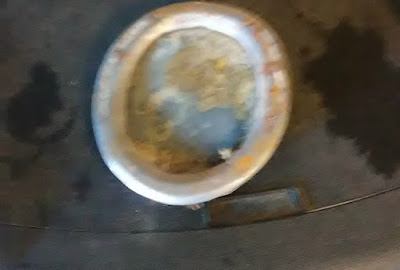 Ok, so I didn't realize what a terrible pic this was until I took it off my phone.  This was what she was in, egg bars with pads, only on the front, she's barefoot in the rear.

She still has her moments, as seen here after two blog friends helped me out when Super B presented the perfect photoshop opportunity because I didn't ask for the right lead canter perfectly. 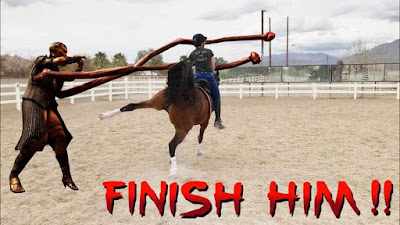 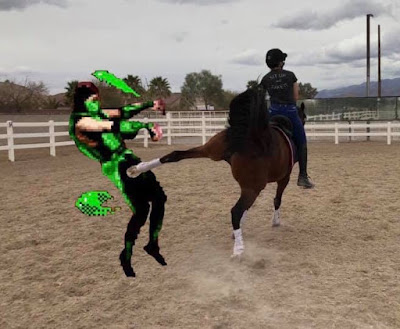 Let me explain that photo again, her right side has always been her more difficult side, because she's been a NASCAR most of her life (go fast, turn left).  She has been opinionated about the right side sometimes when I ask her to canter.  We started with mare glares, teeth grinding, and reluctance to canter to the right when she first came off the track. 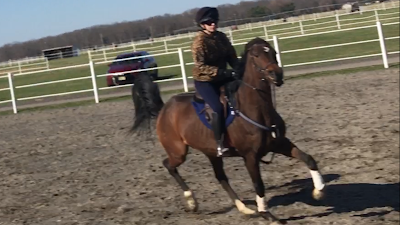 She has had regular chiro and massage work and along with regular under saddle work, and work on the lunge line to the right, she has improved A LOT.  It keeps improving with time.  I think part of it was some pain due to some serious chiro adjustments she needed, and some of it was the fact that it felt weird to her.  It wasn't normal and she lacked strength on that side.  With time it is becoming normal.

Now, if I don't sit in the perfect spot I will get a kick out here and there but NOTHING like what it used to be.  If she did it consistently, I would be concerned and it would be further evaluated.  The chiro even told me the best thing for her is work.  Our chiro here was an exercise rider at one point too, so he is EXTREMELY familiar with OTTBs.  Also, I think it is important to bring up the fact that when she does act silly I have NEVER felt like she was being mean about it.  Some horses you can tell when they are giving you a violent warning, this is not her.  I have never felt like she was being malicious, even in the times when she gets wound up about something to the point where she leaps around a little bit.  Never have I felt like she is trying to put me on the ground.  I'm not saying it isn't possible from her, I'm just saying she hasn't made me feel unsafe at any point.  I trust her very much, and she knows it.

Here is proof she can pick up her right lead with no drama:


You will also see her here from this past Sunday, cantering to the right beautifully:


More miles will bring more improvement.  Here is another massive difference.  The top was in October, right before she was out of work for three months due to the abscess from hell, the bottom was a week ago.


And while we're on the topic, I got her video from Keeneland last week from when she went through their yearling auction in September of 2011.

Even as a yearling, she was a super model!!
Posted by The Jumping Percheron at 9:59 AM