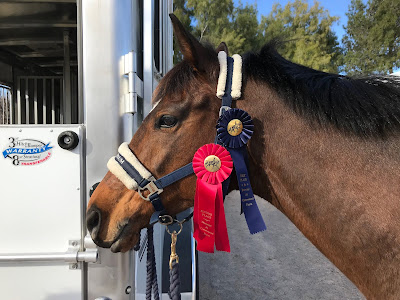 Last weekend I put Super B in a dressage schooling show that was right down the road.  I was going to take Klein but then realized there isn't much of a point for Klein right now because she has so many miles and she's so reliable at shows.  I always know what I'm going to get with her.  9.8 times out of 10, if she puts a hoof wrong, it's some error I made.  This made me take Super B instead.

Super B has been to that barn before, though we didn't ride for long there.  We went down there for a saddle fitting with a Custom Saddlery rep to try some saddles.  She was a little wild that night which led the rep to make a comment about how she would get on a horse like Klein (I took Klein too, but I'll be keeping her Trilogy on her), but she wouldn't be inclined to get on a horse like Super B.  But, she did settle down and worked nicely.

I was hoping that time spent there would work to our advantage.  Also, since it was a schooling show it would be a low key atmosphere for her, or so I thought.  I just put her in Intro B & C to keep things easy for her.  She's ready for Training Level though, and First is not far behind.

There were thunderstorms that day that were coming from the west over the mountains.  We were on the edges of them.  While I never find it acceptable for horses to act stupid because it's windy (um, hello, they live outside...IN WIND), I will give Super B a bit of a pass because there were some horses getting pretty upset and I think that got her wound up.  I was hand walking her around when I unloaded her to just check the place out and some horses in the warm up lost their minds.  B was like "Oh we get crazy here?  I can get crazy too!"  She proceeded to prance around with her tail in the air, snorting.  Silly, but she looked gorgeous.

The horses at the barn next to where we were ended up tearing around the pasture full blast and one decided he had enough and just jumped the fence and took off.  So that added to the chaos.  Klein would watch all of this and just be amused.  She looks at stuff like that like it's all below her and she would never even consider being so goofy. 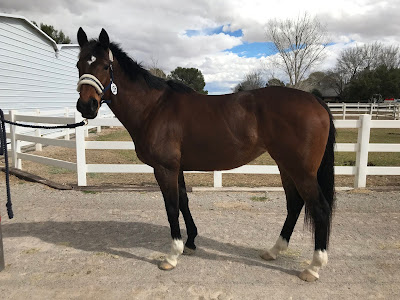 Damn girl...  She looks AMAZING right now.  I can't wait to see her in her summer coat.

After the horse was caught, Super B went back to falling asleep at the trailer before I tacked her up.  I tacked up and headed to the warm up where she was great for the most part.  I still have to figure out a strategy for warming her up.  I figured I would give her more time than I thought she needed...that wasn't the right answer. 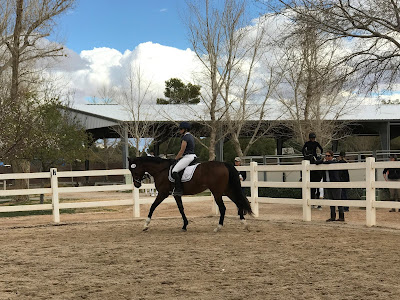 Being a good girl in the warm up. 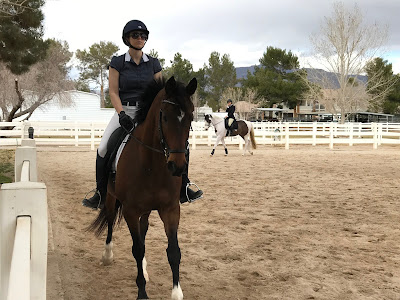 We went in for our first test and she couldn't halt straight to save her life.  I think it was the glass on the judges booth.  It had a big glass sliding windows and a glare.  Which is again, not really an excuse, but I think it as distracting to her and she wasn't sure what it was.  She has mirrors at home now so she's used to those but the mirrors there are full length so that may have been eye opening as well. 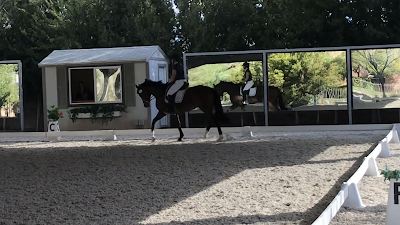 Ok, so here you can see exactly what I was talking about with the glare on the judge's booth. 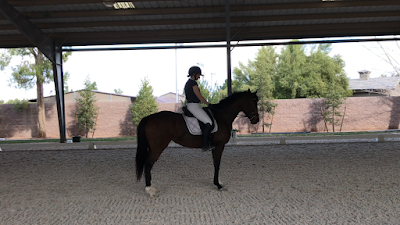 Square, but not straight. 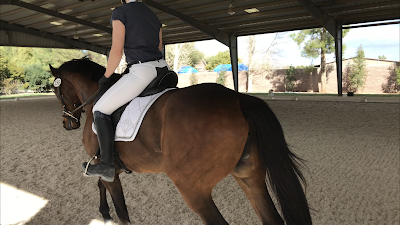 Aside from not wanting to halt straight (she is 100% capable of beautiful square halts when she isn't concerned about things) she was just a little fussy.  After that test we went back to the warm up to work on our canter a little more.  She was being pretty opinionated about it and had also figured out she didn't have her running martingale on.  I have been putting it on her for dressage schools in hopes of helping her kind of forget her bad habit of throwing her head straight in the air.

I can't really complain though because her head throwing habit was easily 90% worse a year ago.  It has all but went away now.  Most of our rides now she never does it.  I still had the running martingale on her just in case.  It is rare she actually tests the waters with it.  I was torn between using it for dressage schools or not since it's not allowed to be used at dressage shows.  I decided to use it for a little while just to see if it would help get rid of that last bit of her bad habit.  Plus, it only engages when it needs to so it doesn't do anything if she's going nicely.

She started throwing a pretty big fit in the warm up but I did manage to get some nice canters.  The guy running the warm up even offered to let us go last if we wanted so I could have more time.  Initially I thought that was a good idea, then I decided to just go because I could tell part of the issue was B was just kind of over it.  She was wound up and getting frustrated so there was no point to prolong that.  We would just go in and do what we could with what we had. 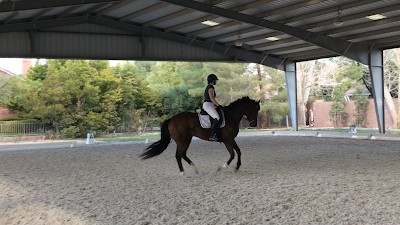 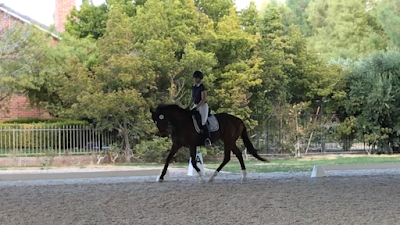 Not hard to see why she gets comments about her looks on every single dressage test we've ever ridden. 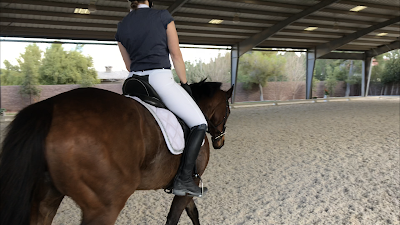 The second test went better than I thought.  She got both her canters fairly quick and held it together until the last trot down the long side before turning back up the center line.  There we were, just trotting down the long side and out of nowhere she did threw her head straight in the air so I quickly turned her in a circle and continued like it never happened.  That's how I always handle it.  She was crooked up the center line and again didn't want to halt straight but we survived. 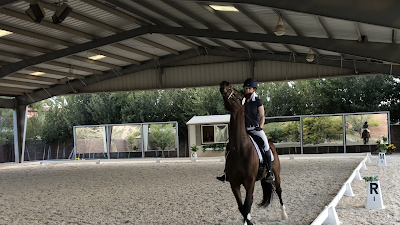 *SIGH*  There it is.  We were just trotting down the long side, nicely when this came out of absolutely nowhere.  At least she goes right back to work like it never happened.

Even with her silliness, she scored in the 60's.  I was surprised.  The judge must have been feeling generous.  I did get comments saying "quiet, tactful rider" and she got comments saying "elegant horse, lots of potential, just fussy today."  So, the judge sees what is there even though she wasn't on her best behavior.  I don't blame her though, she was great at her last dressage show in NJ because she had been to that barn several times.  That's where she scored in the 70's.  THAT is the kind of stuff she is capable of.  I feel like she is still getting her bearings here.  She is 80% settled I would say, but she is still anxious when we go new places here.  She had just gotten comfortable with her new life with me in NJ when I moved her 3,000+ miles away to a place completely foreign to her.  Me, and Klein are her only constants so I can completely appreciate why she is slightly concerned. 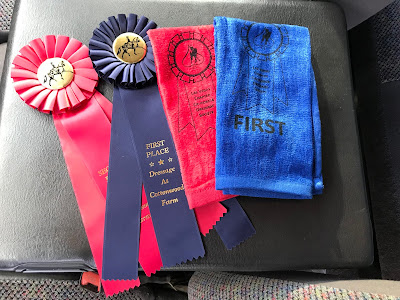 I had hoped the whole head throwing thing wasn't something where she was like "oh now that I KNOW the running martingale isn't on I'll just go back to doing this."  So, there will be no more schooling with that for dressage schools.  The next time I rode her at home after that show I didn't have it on, and she was GREAT.  So, it's not the martingale.  It was a combination of being somewhere unfamiliar and craziness going on around her.  She's pretty level headed about A LOT of things and I think she just needs a little more time here and for me to continue taking her out to different places and she won't get so wound up.  Stuff like this is EXACTLY why I took her and not Klein. She obviously NEEDS the miles.

Afterward, her normal calm while her staff...aka The Other Half, tends to her majesty.

We'll continue to go different places regularly, to include that barn since it's right down the road.  The first couple weeks she was here, even at home (our new home barn) she felt kind of anxious, that has completely left the building, so now I expect the next step is going to be that calm no matter where I take her.
Posted by The Jumping Percheron at 12:30 AM