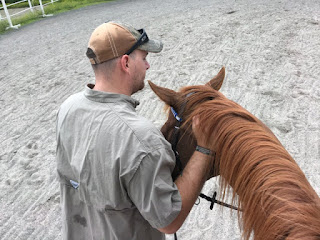 The Other Half finally came home!  Hopefully he stays for a while this time around.  He ended up helping me with a horse I had just started riding who wanted to give me a dirt nap every time I got on him.  I have no idea what was up with him.  He was pulled from a kill pen so there is no telling what had gone on prior to arriving.  He seemed like a pretty level headed guy, until one day I watched him dump someone within about 10 seconds of them getting on him.  And by dump I mean went full rodeo and was not going to stop until he launched his rider.  He continued to run around bucking after he got rid of his rider too.

There was really no reason for it, well, I mean obviously there IS a reason but nothing obvious.  It wasn't tack, it's not a physical issue.  Any time a new horse arrives at this barn they get the full once over and if ANYTHING and I mean ANY LITTLE THING needs done, it gets done.  Teeth, chiro, injections, weight gain, de-worming, feet, surgery for an injury, etc, etc...  If they need it, they get it immediately.  This guy looked like crap out of the kill pen but now?  Now he's as shiny as a new penny and had a hay belly from enjoying life on some NICE pasture with his new friends. 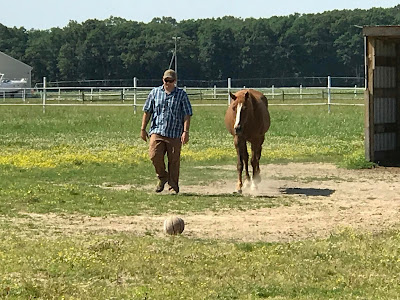 Following his new BFF in.

Even bareback, Romeo had a BIG problem with being asked to go forward to any degree.  Leg or voice, he wasn't having it.  His response was to toss his head and start hopping around.  So, it wasn't tack, it's not physical, and it's also not because he is red (I think the red horse stereotype is a load of b.s. and I refuse to believe it).  I decided to just stay the course with him and walk him around as much as I could after he would try to dump me to show him that, one, nothing bad was going to happen, and two, dumping your rider isn't going to get you anywhere.  He never did manage to launch me though.  He came close to succeeding once, but never did.  And when he would try I would just tell him to quit and ask him to go forward.  I wouldn't get after him because I am 99% sure that would re-light his fuse. 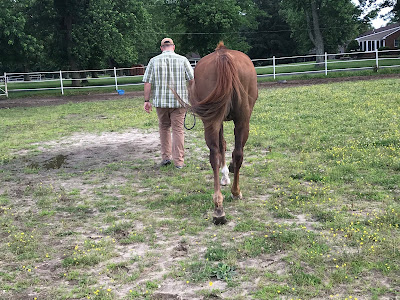 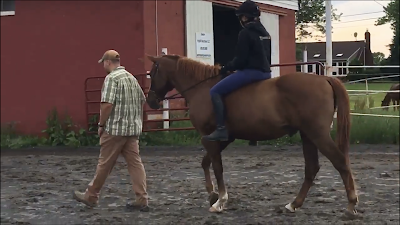 He couldn't have been happier following him around.

In the ring, Romeo was happy to follow him anywhere.  So, for a few rides I let him just follow his new bff.  Gradually the hopping around started to become less and less.  We even had him walking over some cross rails and ground rails, making it into a game for him since he liked to follow The Other Half anywhere.  The Other Half would start off walking next to us, then he would just walk off and let us go and Romeo was finally relaxed and listening to me.  He would let me put my leg on and if he stopped, instead of having a fit when I asked him to move forward, he just moved forward. 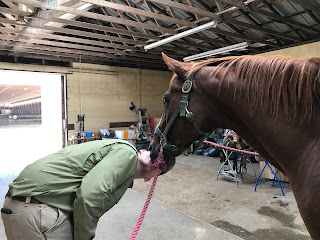 Romeo taking a carrot from The Other Half's mouth!

I really believe that his problem was that someone was rough with him in his prior life.  My theory is that someone rode him with some big spurs on and would jab the hell out of him and that is why he had such an issue with any amount of leg.  I never rode him with spurs either.  It just took him a bit to realize that whoever that person was, wasn't in his life anymore and that he could stop expecting bad things from us.

I'm happy to say that Romeo has found a happy home as a trail horse, which I think he will enjoy very much.  If anything doesn't work out, he comes back to that barn, which The Other Half wouldn't mind.  I think Romeo has found just where he belongs as a trail horse that can happily lumber along and relax.
Posted by The Jumping Percheron at 10:55 PM