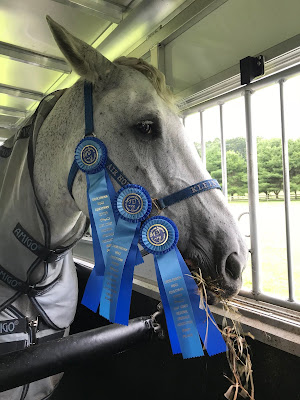 Some of you know that I have decided to wander into the rated dressage world with Klein this year.  Klein has just been amazing with her dressage work lately and has seemed to have found a new level of balance.  We're genuinely enjoying ourselves.  I have never done a rated dressage show but after having so much fun with it lately and knowing that the Percheron Horse Association is now part of the USDF All Breed Program again, I decided to make that our goal this year.

But, what about Eventing? What about it?  We've evented for quite a while, all over the country too.  And quite honestly, I'm still just absolutely disappointed in Eventing right now.  I had a little shred of hope that something may change, then the announcement of the Nations Cup U.S. Eventing Team came out the other day.  I also found this blog that Sinead Halpin wrote for The Chronicle last week to be telling:  Prioritizing What Matters While Chasing the Team Dream

Am I still jumping Klein?  Yes.  Regularly.  I'm not saying we won't do some jumpers because we love jumping and that's not going to change at all.  Here's a jump school from a couple weeks ago:

From our ride this afternoon. A lline of 5 one stride verticals set at 3ft? #kleinmaredontcare she could do this all day. That turn to the line is also half of a 10m circle. Her balance is insane these days. All that #dressage work is paying off. #Klein #mare #percheron #shesnotaclydesdale #drafthorse #hearthorse #horseofalifetime #bamf #oghorse #jumping #horsesofinstagram #maresrock #jumpingpercheron #blog #GoPro #helmetcam #grateful #dieliving #dieliving♠️
A post shared by Stacey C (@jumpingpercheron) on Jun 8, 2018 at 11:22am PDT


I'm ready to learn new things.  Klein is limited with eventing.  Training is her limit.  Yeah, I have schooled her at 4' but it is obvious it's much more than that to go out and do a 3 phase.  She can make the time at Training no problem, she can jump all the Training things, Training dressage is definitely no problem.  But, that's her limit, for safety reasons.  Plus, what does she have to prove to anyone?  Nothing.  The fact that she has won recognized HT's at Novice as a full Percheron is ridiculous.  The fact she can school at 4' no problem is also ridiculous.  She does things I could have never dreamed she could do, or would do so incredibly well.

Anyway, the point is, Klein is much, much less limited with dressage and concentrating on dressage right now is in no way, shape, or form saying we're now DQ's.  A couple people have asked like competing seriously in real dressage means Klein is a dressage only horse now.  I'm not sure where you guys get that idea, but that is false.  She is still jumping, she is still galloping, she is not stuck in the sandbox, so calm down.

We had our first rated dressage show last weekend.  We had a great time!  Klein did First 1, First 2, and Dressage Seat Equitation.  She scored a 64% on both tests and a 70% in DSE.  The judge absolutely LOVED us.  In the DSE she said she wanted to take me back to her farm with her as a working student.  She said Klein has incredible balance, a massive amount of potential, and should be piaffing no problem.  Her biggest thing for me to fix was my rein length.  My reins were consistently too long which made for some inconsistent contact here and there. Still, 64% on both tests was fine by me, those are All Breeds qualifying scores, and the DSE score is also a year end award qualifying score. 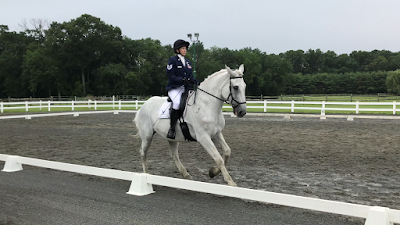 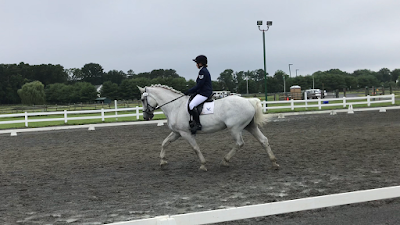 I also know little things that I could have done better as well and will work on.  Knowing the tests better is one.  While I didn't have any errors, I just feel like if I knew them a bit better I could have been better prepared for some of the movements.  For example, in First 2, as soon as you turn right off the center line the first lengthening starts at M.  I could have prepared her a bit more with a better half halt there but my mind was still turning off the center line.  So, small fixes can clean our scores up. 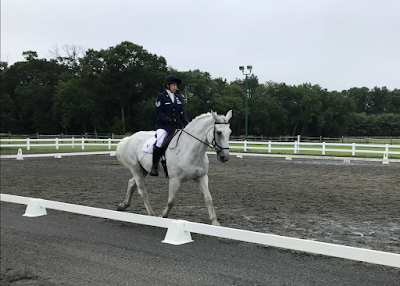 She ended up winning both tests and DSE at that show.

A few days later we hit our next rated show and did First 1 and First 2.  This show wasn't too terribly far away so I figured we'll just knock out some more rated scores for All Breeds and year end award from the three different organizations we're in.

I should have given her a bit more time to warm up at that show for our first test but we still managed a 63% on First 1.  I think our bend could have been better and so could a couple of our upward transitions.  Normally she doesn't look at much, but something had her attention just slightly (this was a farm neither of us had ever been to before too) during our free walk.  She wasn't completely distracted, but just enough to make our free walk a little inconsistent.  Again, easy fixes, thankfully.  No major issues anywhere.  I felt like she was a bit behind my leg for that test and that was my own fault for not really asking for enough in our warm up.  All this is, is helping me learn my strategy for these shows. 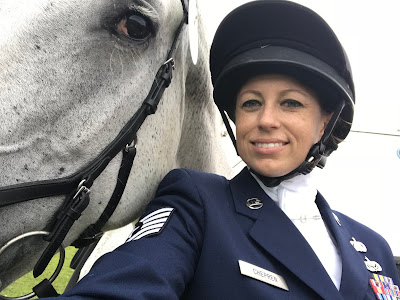 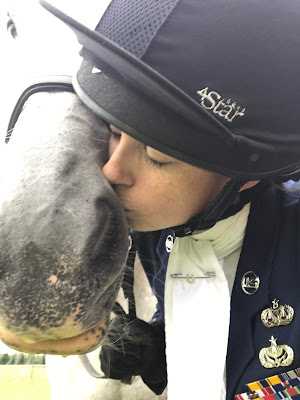 Shortly after that we rode First 2, and scored a 64% on that test.  With that one, our leg yields were lacking a bit of reach.  Again, just a bit behind my leg.  The judge did make a comment on that test that our canter lengthening needed to cover a little more ground, so we'll work on making that happen in our next lesson this week.  While I think our scores can easily be better, I am really happy that I don't walk away from these tests wondering why we got the scores we did or the comments we did.  I can feel what I need to fix, and I can make the adjustments in the warm up between tests.

We were pinned together with the Open riders at that show and we were 1st for our First 1 test and 3rd for First 2. 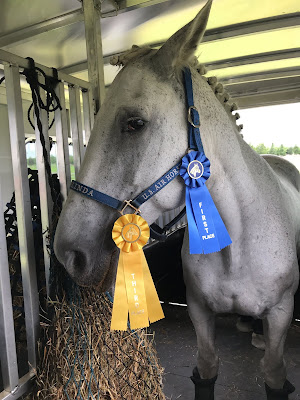 "If you don't stop taking pictures, and start taking these braids out......."

We're going to continue to collect a few more rated scores before it consistently gets super humid and hot here.  I also wanted to get them done so that I'm not scrambling in the fall to hit certain shows for certain scores.  This way I'll have what we need and we can move on to Second Level.  That will give us time to work more on that and not worry about shows in the hotter months.  I am still being careful with competing her in the hottest months.  The heat and humidity are harder on the bigger horses.  She'll work through the summer but I am very careful about what time of the day she is working at and her work/rest ratio.  Ms. B and Mochs I don't have to worry so much with (note I said so much, aka I still worry and am careful with them too) in the heat.  Mochs was born in South Georgia and lived there the majority of her life, and Ms. B., well, she's a thin skinned TB, she'll be fine.

I also just found a new dressage instructor that I am really excited to be working with.  Not only with Klein, but with Mochs, and Ms. B too.  I think we will learn a ton from her and I can't wait to not only learn, but to apply it and improve/progress.
Posted by The Jumping Percheron at 11:00 AM