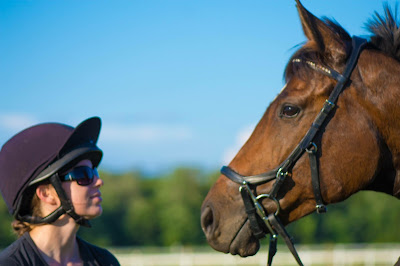 Ms. B just keeps getting better and better.  There was a short period of time where she started to back off from contact and not want to go forward at times when I would ask her to trot.  She doesn't do things like that for no reason.  She was trying to tell me something.  She was in a Boucher for dressage work and a french link three ring for anything else.  She doesn't need them.  They were a bit much for her.  At first she seemed to really like them but over time she started to kind of bounce off of them. 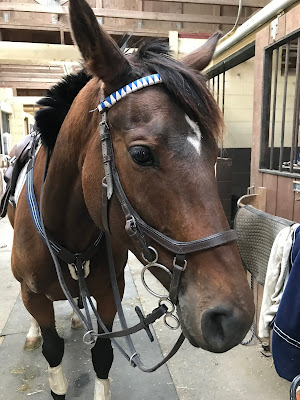 She isn't the kind of horse that wants to rip your arms out.  She doesn't need much.  I put her back in the french link full cheek and she immediately came into the contact and was seeking it.  She even has a little foam going on with it.  She went better than she ever has as soon as I made the switch.  One evening she had the best canter work yet.  The Other Half was there that evening and at one point I had to stop and sit there for a minute and gather my thoughts because I just had one of those "I'm so happy with this horse I might just fall off right now" moments.

She is coming back and lengthening in the trot now and completely understands the concept of a half halt and immediately responds.  Her canter cues are sinking in.  I used to have to stay off her back more and really get her organized before asking her, and if she broke at the canter I would have to kind of get her re-organized and then continue.  Now I am sitting and asking for the canter and she goes.  If she breaks, I just immediately ask her to pick it up again and she does.  You will see that in the video below.  The music was from an outdoor party going on by the ring.  We enjoyed having music and can totally see her one day doing a musical freestyle. 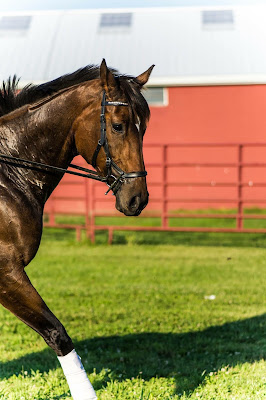 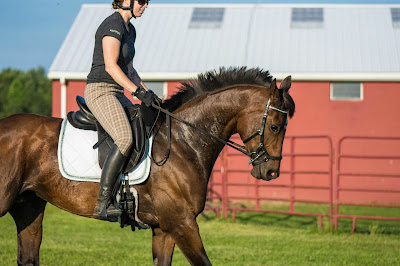 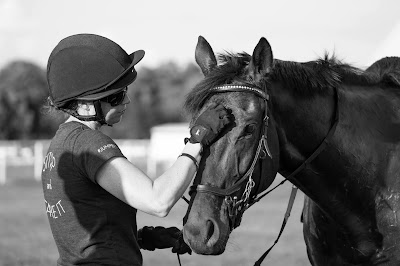 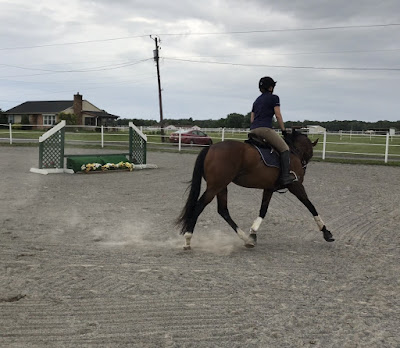 I also recently took her out for her first real adventure on some trails.  We went alone because I had no reason to think she was going to be silly.  She was great.  She really enjoyed herself.  We galloped a bit and she played in the river.  She took a minute to realize that the river was just water.  It is really dark and I think she wasn't sure it was just water.  But once she figured that out, she was splashing around in it and getting in chest deep. 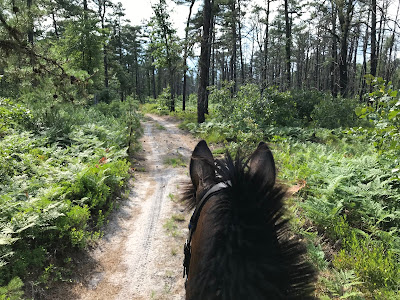 One happy mare out adventuring. 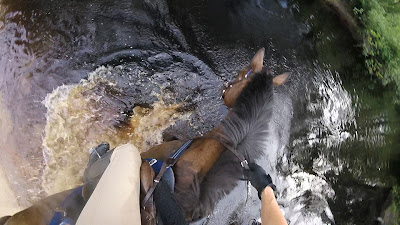 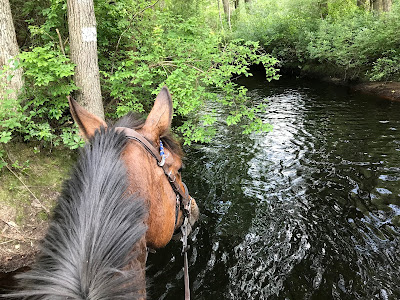 
At first she was a little excited, but by the end she was cruising along on a loose rein.  We were passed by multiple vehicles, people on foot, and people on bicycles.  Nothing bothered her.  We even found Santa Claus...in the middle of the Pine Barrens.  We came around a corner to a plastic Santa in the middle of the trail.  It is probably one of the weirdest things I have ever come across while out riding.  Ms. B just kind of looked at it like "huh, that's dumb" and ignored it. 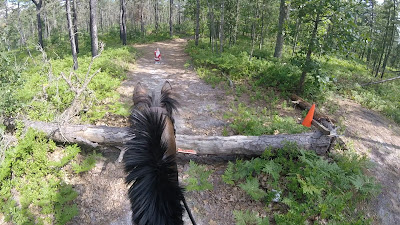 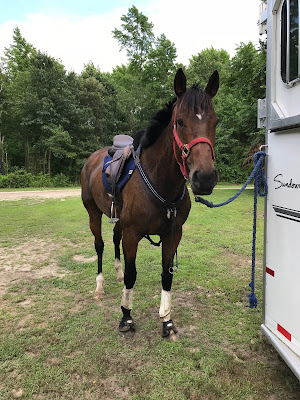 She had also been hanging on to some dead winter coat and was still needing to put a little weight on.  I started to think, oh here it is, here is the ulcery have to feed it like a furnace TB.  Though she has already been treated for ulcers and wasn't displaying anything indicative of it aside from a coat that was still lacking.  She had also been given a PowerPac not too long ago, so I was going to do a fecal to see if maybe we missed something.  Enter soybean oil.  Klein, Mochs, and Wes all get soybean oil on their dinner and have been for years.  So it was worth a try, it's an easy high fat source.
Two weeks later and she had filled out, ditched the last crappy pieces of coat and now looks absolutely amazing.  I honestly have never seen a horse respond so quickly or so noticeably.  So, there we go, foot in mouth.  She proved me wrong AGAIN on one of my TB stereotypes. 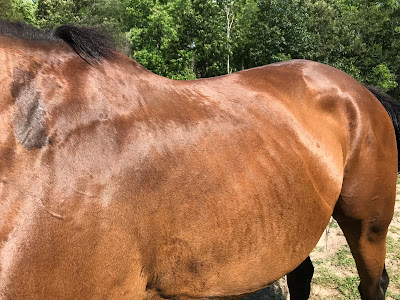 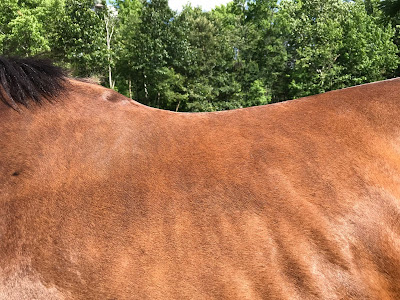 And hey, look!  Megan even came to try another horse at the barn so we got to ride together!  It has been way too long since the last time! 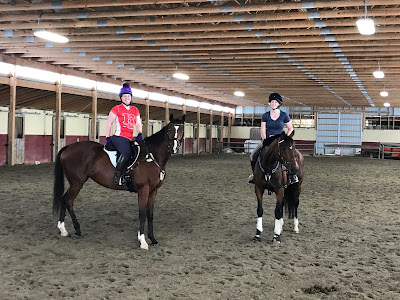 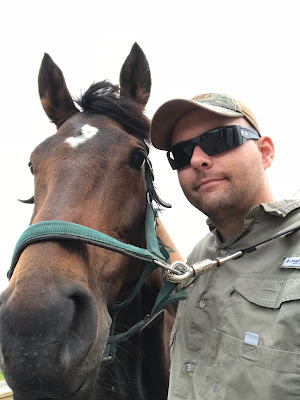 She's even good at selfies.  This was a secret selfie The Other Half took one day that I found on my phone.


Her personality just keeps coming out more and more as she learns that she is an individual and not an expendable instrument of income.

This just cracked me up.  Yes, very classy with the sound effects. 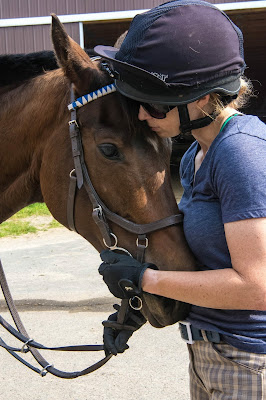 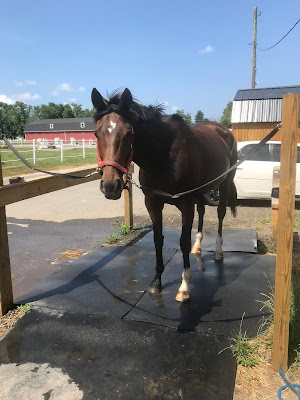 This face in the pic above gets me every time.  Every time I come into her sight this is the face I see.  Ears pricked, wondering what we are doing that day.  She is always interested.  When I go out to get her and call her name, she will turn and walk to me with this face.  If she is in when I get there this is the face I see peering out at me.  She is a horse that is present.  She isn't out in lala land wondering what her friends are doing or pouting about maybe getting fed later than normal.  She cares very much about what we are doing and is there to listen, learn and give her all, as long as you are willing to listen to her too.

Here is another great pic by Sherry that captured that face perfectly: 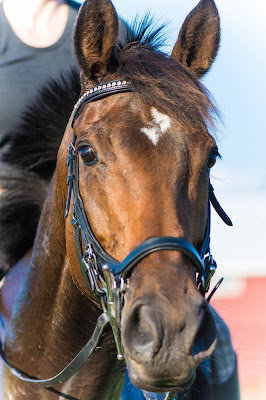 Just FYI, Sherry is a professional photographer (I know, it's obvious through her photos) in the South Jersey area and she does a variety of shoots from Sweet 16's, to weddings and other social gatherings, and everything in between.  If you are in the area and would like her contact info for your event, let me know in the comments.

I think we just got to a really good spot, and I think our progress will take off from here.  She is clearly insanely athletic, and some people are wondering why she's not out jumping 4' courses yet.  We did school some xc, and she was great.  And we have jumped some small stadium jumps.  However, her flat work needs to get better.  How in the world am I going to be able to communicate with her around a course if she doesn't have the basics down?  So, I'm 100% ok with still being on the flat right now.  I have other horses I can jump, and I do.  It doesn't have to be her right now.  I want to give her the respect she deserves and that is to let her tell me when she is ready.

The plan for now is to continue putting in the dressage work and hit some schooling shows soon.  I will also continue taking her to new places to mentally give her a break and let her see some different scenery.  When her dressage work gets more solid she'll start going through grids.
Posted by The Jumping Percheron at 11:14 PM