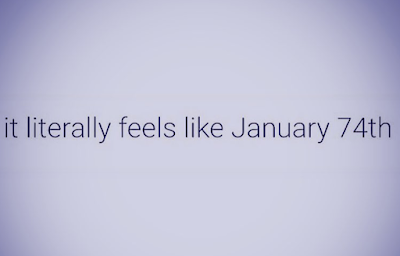 It's been slow on the blog mostly because I've been busy getting my ass kicked with a lot of things.  The storms that hit us for a few weeks in a row did some significant damage.  That all started off with a storm that flooded the property, to include the basement.  It was so bad our road flooded and the cops came and barricaded the road.  It was awesome.

Just when I didn't know how much more awesome I could handle, I got to find out with another storm that ripped our internet line and power line out of the side of the house.  If there is anything good about having a live wire down in your front yard, it is when there are tens of thousands without power, the live wire thing bumps you up the priority list.

The ponies are all doing well, though Mochs is kind of over it.  Klein and Wes will stand out in the crappy weather, Mochs stands under the over hang of the barn with a disappointed look.

I'm extremely lucky and grateful that I have somewhere else to ride so all this rain/snow has not put a dent in my riding, except for that one time when for the first time EVER since we have lived here, I got my truck and trailer stuck in the mud.  That is how much water we had.  I also got the riding mower that I drag with stuck in the mud so bad I had to pull it out with my truck.  Of course, all of this happens while The Other Half is gone.  He's been gone a couple months and we have a couple more to go, so...his chore list just keeps piling up!  JK!  ...kinda.

Needless to say, blogging kind of fell down the priority list again because in the middle of that I completed two classes in my Master's program.  Aside from what happened with Manny, these are all first world problems, and believe me I know that.  I never, ever take for granted that I can see my horses from our front window, no matter how crappy the weather gets, or how many inconveniences happen.  Because that is really what all these things are, inconveniences, not problems.

The flood...there is a stream that runs around the property and normally it is so small you can easily jump across it on foot... 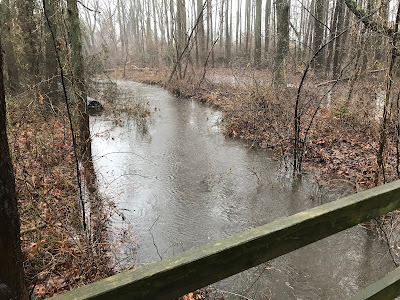 The point where I started to get nervous because it just kept rising hour after hour. 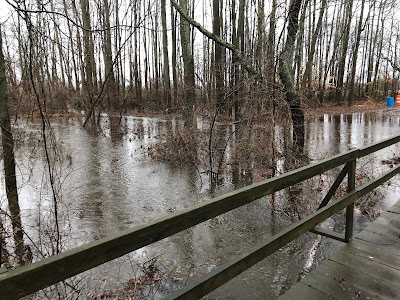 Why I was getting nervous.  To the right you can see some of my jumps, that is how far the water went, into the ring.  This picture is from the same spot a couple hours later. 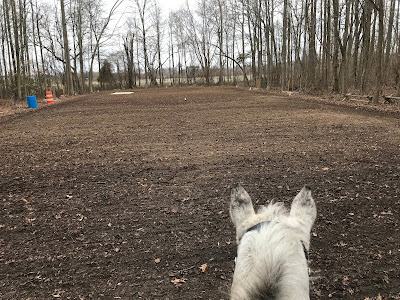 Here it is shortly after, dried out and dragged.  The barrels are in the same place as the first pic to give you an idea. 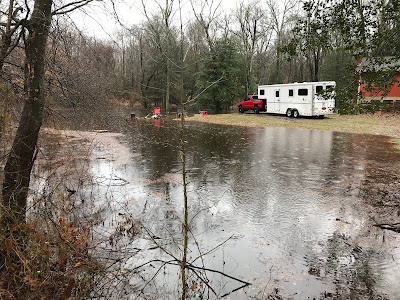 Something else I am extremely thankful for is the way this place is, the barn is on higher ground.  Even with the massive amount of water in the form of snow or rain, my ponies NEVER had to stand in water or mud.  That would have just been fuel on the fire with me. 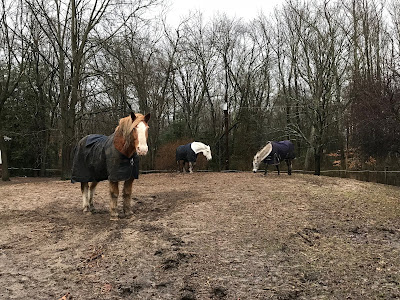 Also some higher ground so they don't have to stay in the barn, that also would have been fuel on the fire with me. 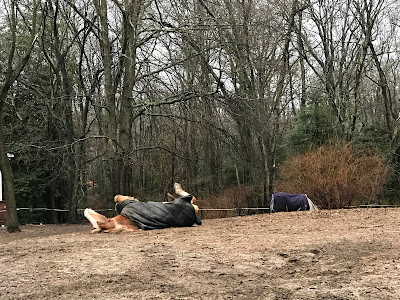 Here is part of one pasture, flooded.  And here is also a PERFECT example of "Complacency Kills." 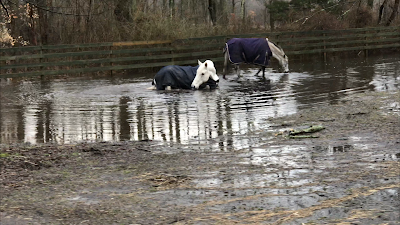 Exhibit A, Klein LAYING down in the water.  I have owned her for over 10 years now.  Not once EVER in those 10+ years have I EVER witnessed her even THINKING about doing something like this!  We have went to the beach and been in the ocean countless times, as well as rivers.  Never had she ever even acted like the thought came within 10 miles of her head.  Never say a horse will never do something.

There have been a few really nice days here and there.  On those days I stay out of the house because the last thing I want to do is waste those days.  I really don't like being stuck in the house, so any day I can take full advantage of being outside in beautiful weather right now, I'm staying out there all day.

One of those days I took Leo to the state forest that is close by.  He was PERFECT.  It was the first time I took him anywhere.  I took him alone because he has never given me any reason to think he would do anything other than be on his best behavior.  I was right.  He could not have been any better.  He was happy to stroll along on a loose rein or on contact.  He got right in the water at the edge of the river.  He didn't care about kids yelling out of car windows at him, or dirt bikes, or people popping out of random places on foot or on bikes.  He had a great time galloping through the forest.  He was amazing.  I already trusted him 98%, but after that I have 101% trust in him.  He just LOVES being out somewhere with his person.  I am happy to say he found his person last week too, we'll talk about that later.  They are an amazing match and I am excited to see them grow together.

Leo on the flat, showcasing one of his many natural talents.

My #marecrush, Ms. B, continues to improve daily, and continues to impress me with everything we do.  If you follow me on IG...spoiler alert, you know how that story is going to end.  We'll talk about that later too. 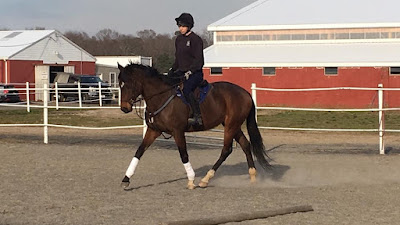 Mochs was doing well in regular work until about two weeks ago when I started to feel her stride shorten.  We knew the injections would wear off fairly quickly, so that was no surprise.  I made her an appt last week and she got the second round, this time with Hyaluronic Acid in addition to the steroids.  She should be feeling like twinkle toes by the end of the week.  She did go back to work this week and is feeling and looking great, more on that later as well. 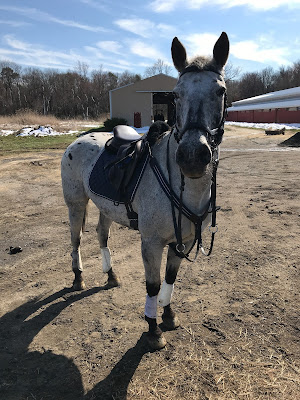 Mochs, happy after her first short jump school the other week.  It was a bit of a test run and she did great, and felt great!

The only good thing I could find in what happened with Manny was the fact that we could go to the shelter and show two kitties what it means to have a forever home.  You can follow them on IG as well @snickers_and_woody 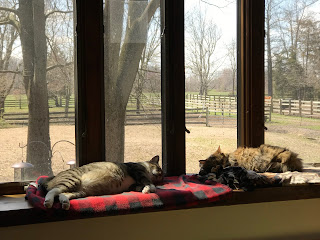 Sweet babies, all settled in like they pay the bills around here.

Mochs was set to show this weekend at a local dressage show.  But, what a surprise, more crappy weather inbound and I just got the call tonight that the show is cancelled.  That is a completely fair decision.  The forecast has been all over the place from significant snowfall to significant rainfall and everything in between.  No one needs to be out hauling in the mysterious thing that is our weather right now.  I am cautiously optimistic that the end may be in sight though.  Next week we see a warming trend that seems like it is going to come in and stay.  I can't wait, because having so many grey days, rain/snow, wind, and 35 degree temperature fluctuations are just depressing.  Sometimes being a person with an outdoor hobby sucks.  Of course I still love every ride and make riding happen because I'm not going to get beat by this bs, but I'll be happy when we can ride around on sunny days in a t-shirt.

On another note, this weather improvement is what I have been waiting on to get Klein back in shape.  She is such an easy tune up that I have put my energy into the horses that actually need some consistent training in order to improve.  Klein?  Ha.  I could go out there right now, get on her bareback and ride a second level dressage test or jump a 3'3" course and not think twice.  She retains everything and she bounces back into fitness easy because of the base I put on her when she was young.  All of that time I obsessed over our conditioning schedule has payed off immensely.  So, anytime now warm weather...aaaaaaaannnnnyyyyytime.
Posted by The Jumping Percheron at 11:44 PM