The OTTB That Made Me a Liar 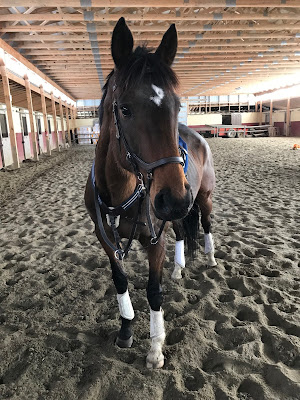 It's no secret that I am an anti-TB person whether they come off the track or not, I have never ridden one that I would ever want to own.  I don't MIND riding them, they just have never had the mind or physical longevity for me to want to have one (there ALWAYS seems to be something wrong with their legs or feet, if they're not lame they have a swollen leg, etc...).  They just always seemed to do dumb, pointless things mostly because they don't know how to horse and haven't been allowed to live like a normal horse prior to coming off the track.  That is not their fault by any means and I don't hold that against them, but doing things like spooking at the same thing every single day, or even their own shadow, just gets old.

For years and years and years I have been like this, because of these experiences with TBs.  Some of them that never had a track life have been just as nutty as those that did.  Needless to say I never once considered owning one and swore up and down no one could even pay me to own one.

After all those years I found that there IS an exception!  She exists, and she found me.  She was a sale horse I was riding and had last raced in October of last year.  She had been let down for a couple months, living outside, having friends and being a horse for.  She is 8, so she waited quite a while for the normal horse life.  I first started getting on her in the middle of January and it didn't take but maybe three rides before I was like...I kinda LIKE her.  Three rides of which were basically nothing because she was starting from square one.  Physically I liked her, both looking at her build and riding her.  There is something about her that just feels like she is the perfect fit, size-wise, for me.

When I first told The Other Half that I genuinely REALLY liked her, his response was, "Lmao."  He is still out of the country, so 98% of our conversations right now are texts.  My OTTB friends are super smug right now.  Yeah, yeah, laugh it up. 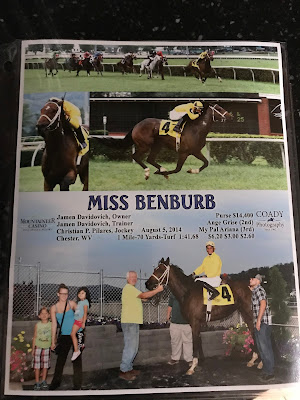 Here is the race that photo came from:


Physically she is built more solid than a typical TB (more bone).  After I looked her up I found that she has a lot of European blood and her dam is Irish.  Someone even asked me what breed she was because they didn't think she was a TB.  She has yet to have any issue, not even so much as throwing a shoe.

She was a bit jumpy on the ground and I chalked that up to most likely being handled somewhat rough in her former life.  She would flinch and pull away like she was expecting to be smacked.  She started to warm up though.  She can still make some pretty mean mare glares but they are all empty threats.  Really she loves having her face rubbed and her ears pet, especially when it is quiet.  I quickly found that she acts tough, but that is all it is, an act. 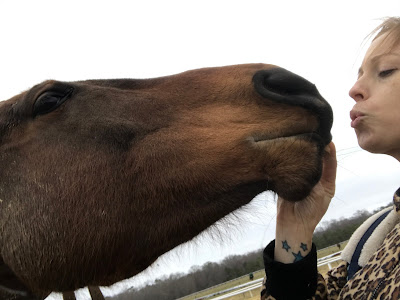 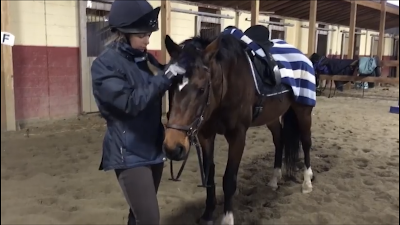 See, not so tough.

She is a very quick learner and always seems interested in what we're doing.  She's not off in La La land watching every other thing going on around her.  The fourth or fifth ride I got on her bareback and went for a walk on the track.  She is just happy to stroll along.  One day I had my trailer there so I tacked her up at the trailer and got on her from the fender of my trailer, she was quiet as could be.  Yes, I know these are very tiny non-significant things but normally, TBs make huge, stupid deals out of dumb things, the bar was set low, ok?  Stuff like that doesn't scare or worry me, I just remain aware of the potential for it, but she displayed no interest in shenanigans.  She actually has yet to spook at anything. 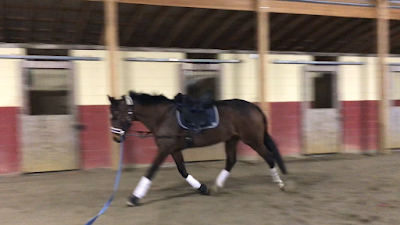 She had no clue what I wanted when I put her on the lunge line.  It took her 5 whole minutes to figure it out.  The next time I put her on it, she needed no reminder of what to do.  She went right to work. 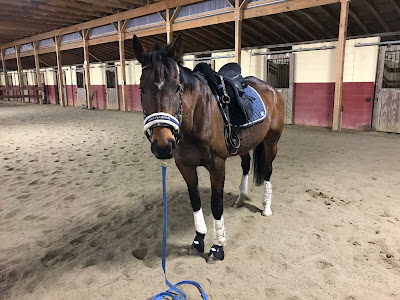 One OTTB I used to work with would turn in and just rear for no reason, that is the kind of dumb stuff I am talking about.  And here we have Ms. B., real wild on the lunge line.

As I kept spending more time with her she kept trusting me more and more by being a little more willing each time.  I enjoy riding every horse, but she just kept growing on me.  Every ride we did something new I would hope she'd do something that would make me say "Ha!  I knew it was in there somewhere, what was I thinking?!  You're not THAT cool."  Well, here we are almost three months later and that day has never happened. 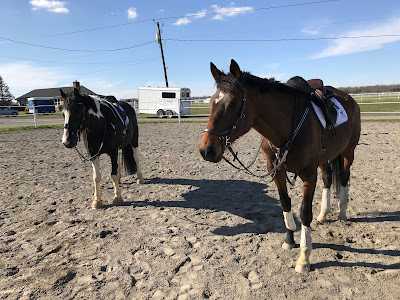 I took her off the property to a place she had never been, alone, and she was as quiet as could be.  That I would expect since she is 8 and has traveled the whole east coast during her racing career.  But, again, the bar was set low, so while I would like to THINK a well traveled horse wouldn't be phased by this stuff, it wouldn't surprise me in the least if she acted like she left her marbles back in her pasture at home.  But, of course she didn't act like that.  She was on her very best behavior.  I can't tell you how many times that day I said "Why are you so awesome?" or "Damn it B, why are you so good????" 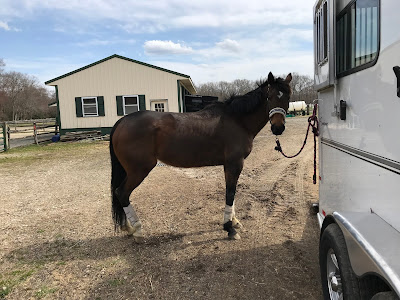 Oh don't mind me.  Just over here proving you wrong one thing at a time.

That first time off the property was also to a xc course.  That place has a small xc course with trails that go around the whole 100 acre property.  I love riding there, the footing is nice, it's a beautiful facility, and it's quiet.  Ms. B was happy to get in the water, and go right off the bank.  Again, I was so impressed with her.  I galloped her around it and had her go up and down a steep hill, all of which she went really nicely for.


More from that day:

I have been letting B tell me what she is up for. I am figuring out if she has a limit or mentally can’t wrap her head around something. This helps me get a gauge for what she is or is not ready for and how to move her along in training. So far, I haven’t found her governor. She is ridiculous. Not only does she jump whatever silly things I point her at, she maintains a consistent pace and looks to me for guidance. I have her trust, and that means a lot to me. After this weekend’s school...it is time to raise the fences and start getting a little more serious. She is going to make an AMAZING event horse. The very best things that have happened to me in my life have always come around when I wasn’t looking for, or expecting them 🤔 #missbenburbsyourwinner #OTTB #mare #theottbthatmademealiar #maresrock #horsesofinstagram #thoroughbred #retiredracehorse #eventer #eventing #talented #BisforBadass #jumping #jumpingpercheron #blog #grateful #helmetcam #GoPro #dieliving #dieliving♠️
A post shared by Stacey C (@jumpingpercheron) on Apr 3, 2018 at 6:37am PDT


Yesterday I took her back to the same place:

She could not have been any better today. She has made a massive improvement with contact this week. I had a strategy to improve it that I put in place last week and today at the canter she picked herself right up, into the contact at the canter 100% better today. It worked 😌 But, it helps when your horse is incredibly smart too and is a quick study. This was her first time over this little roll top. She launched me a bit because she gave it her best effort and I can’t wait to see what she can really do out there as she progresses. #missbenburbsyourwinner #ottb #tb #mare #maresrock #eventer #eventing #theottbthatmademealiar #BisforBadass #jumpingpercheron #blog #grateful #dieliving #dieliving♠️ #GoPro #helmetcam
A post shared by Stacey C (@jumpingpercheron) on Apr 14, 2018 at 1:28pm PDT 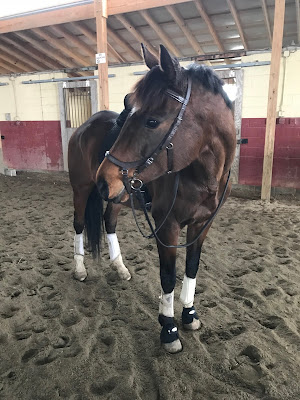 Ready to work on BN A.

She has taken a little bit to figure out her balance.  Some of them find it quicker than others, and she is somewhat of a big bodied girl so that made sense to me that it may take her a little longer.  I wasn't about to rush her into anything.  I could tell that once she built some strength up that is different than what she is used to, she'd come right along, and she has. 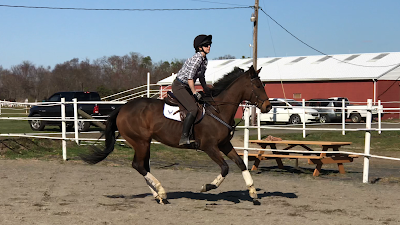 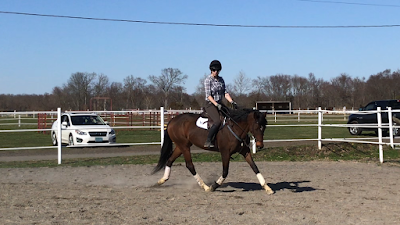 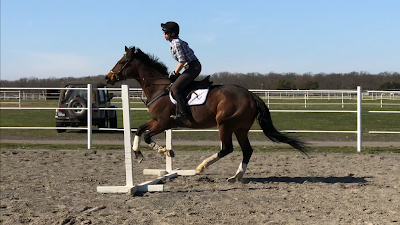 Learning where to put her feet. 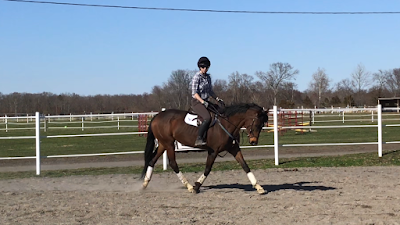 I have just enjoyed working with her A LOT.  She's a mare's mare, likes her quiet time, and is serious about her work.  That has me written all over it.  There has yet to be anything she won't do. I also galloped her for real one night on the track and had way too much fun.  Even after letting her gallop like that, which was probably the fastest gallop I have experienced, when we came back down to a walk after trotting to cool down for a few, she walked along quietly while we enjoyed the sunset.


Part of that gallop:

My #marecrush out on the track this evening. This was about ~90% for her. You can here her speed up as we go around the corner in the second video. Her gallop is sooo powerful, she is a machine! #maresrock #OTTB #thoroughbred #horsesofinstagram #mare #forsale #track #gallop #helmetcam #GoPro #grateful #jumpingpercheron #blog #dieliving #dieliving♠️
A post shared by Stacey C (@jumpingpercheron) on Mar 30, 2018 at 5:12pm PDT 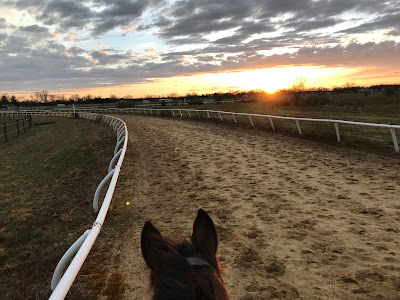 Enjoying the sunset after our gallop.

Another lure to her is the fact that she has no limits.  She is injury free from racing too.  I have told The Other Half over and over when I still wanted to breed Klein how her baby was going to be that no limit horse.  Then I decided not to breed her because I would never forgive myself if anything went wrong in the process.  After that I decided my next one would be some Holsteiner filly since they have repeatedly caught my eye at events over the past year and a half.  If that is what I went for, it would also have no limits. 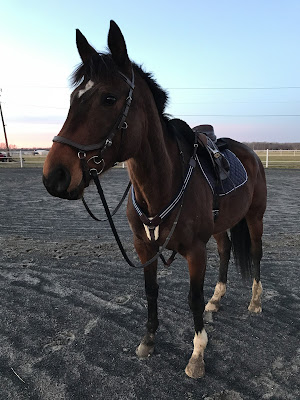 So...my long-winded point is, she's not going anywhere as of right now.  She'll be staying with me for now.  What did I tell you people?  I said someone needs to buy her before I keep liking her more and more.  Well, you all missed the boat.  I'll be posting a lot about her training and all the adventures we are about to have.  Look for her at a horse trials near you :) 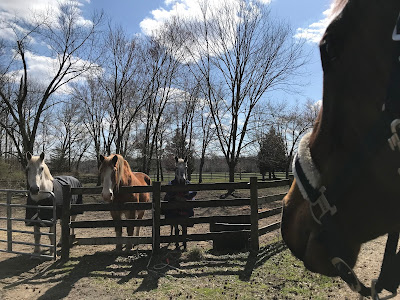 Posted by The Jumping Percheron at 10:47 PM