This Life and Being Resourceful 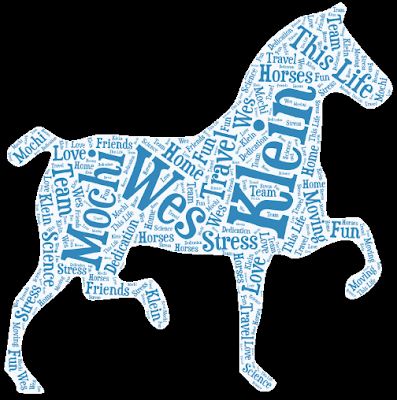 This Life is the life of moving around the country, and across the ocean, every few years with horses.  It includes the many trips in between the big moves that are days, weeks, or months long.  It challenging, but you adapt if you want something badly enough, something being my horses and riding.

This Life requires you to adapt, to have a back up plan, and a back up plan for the back up plan, as well as think three steps ahead most of the time.  If you can't see the second and third order effects of things, you're going to be in trouble too.  It is a lot, but I have been doing it for over 11 years now.  At this point, it is second nature, and I have it down to a science for the most part.  Though I have thought about almost every thing that This Life encompasses, it's possible that it throws random things in there that you just had no chance of seeing until you're faced with them.  In these times, frustration sets in but I've learned to manage that by looking at these unforeseen obstacles as a challenge.  If it is something that pisses me off, I just look at it like "Ok, nice try.  Now, let's see how I can beat this."

With any trip or move, as soon as I find out where I'm going I start gathering intel, which is what being resourceful is all about.  What's around there, who is around there?  That's one perk of This Life, I have lived, worked, and visited so many places that I usually know people close to where ever I go in the world.  Whether it is stopping to have lunch with a friend on the road trip to the place where I'll be working for a few days, weeks, or months, or visiting friends in the area on the weekends.  It can also be friends coming to visit me where I am working while I'm there.

Recently, The Other Half and I have talked about a potential career altering decision for me, a positive one, but it would require some potential logistical hurdles.  This new path is hypothetical, but should I make it a reality, my mind is already ten steps ahead thinking of how to arrange all the logistics to make it happen. 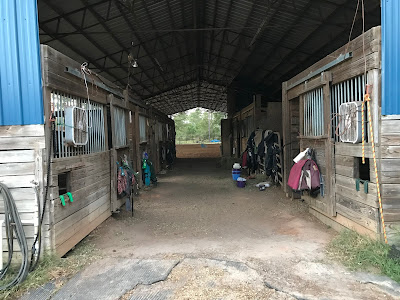 A barn I visited tonight to check out their set up and facilities, for future reference.
This was one of their barns. 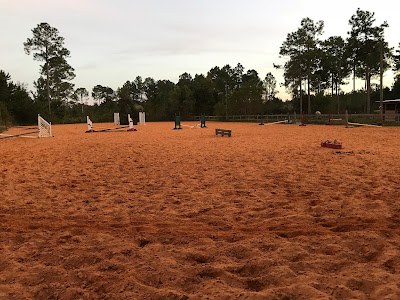 One of the rings at the barn I visited tonight.

Sometimes we get to a new location and I take horses to places people that have lived in the area their whole lives don't know about.  I cannot for the life of me figure that out, but it happens.

This Life is a lot of extra work and stressful hours, but there are benefits.  I already mentioned all of the friends around the world.  We also get to live in a lot of different places, which helps us decide where we want to end up permanently when we retire from This Life.  Moving so much is tiring, but I would much rather be the person that has lived all over the country and know exactly what I do and do not like.  In addition to that, it's nice to experience all the different things each area has to offer.  Even before This Life, I moved around a lot.  While moving so much was hard on me when I was a kid, it seems very boring to me now that some people still live in the same state they grew up in, and that their kids go to the same schools they went to.

This Life also gives you confidence.  Big trips with the horses don't bother me because we just do it.  There is no "well, we're thinking about it..."  No, it's going to happen, the decision is made for you.  You just go, and This Life even dictates the schedule which you go on.

This Life can break people though.  I've seen it time and time again.  Luckily, The Other half is my balance.  When I get stressed, instead of The Other Half getting upset and stressed too, he calms me down because he (don't ask me how) stays calm.  He always says we're going to figure it out, no matter what stressor may be.  He is always right too.  One thing I have learned through the years is that when The Other Half says we are a team, he means it.  He is 101% serious about that.

Take right now for an example.  This Life told me I'm going to Florida for five weeks for a mandatory school (because in This Life, you are FOREVER in school).  We had two options.  One of which would have put me in school in Florida last May-June.  Obviously the other option was for me to go in October-November.  Option 1, May-June, meant that The Other Half would not have had to pick up single parent duty with the horses because he would have still been out of the country for work.  I had a plan for that.  Option 2, October-November, meant that he would pick up single parent duty.  It also meant that we would only get about three and a half weeks together after not seeing each other for six and a half months.  But, he wanted Option 2 because he WANTED to pick up single parent duty.  He said he would rather be the one to take care of them while I was gone over anyone else, and he's doing an amazing job.

I remember the time I asked him if he understood that by having the horses at home it meant he would have to take care of them when I was gone.  He never hesitated, and looked at me like I was crazy for even asking, and said, "OF COURSE I WOULD!  WHY WOULD YOU EVEN ASK THAT?!"  Well...you know...we all know someone with a significant other that wouldn't notice if a horse was running around missing a leg, much less care.  I just wanted to make sure he knew what he was signing up for by having the horses at home while we are still living This Life.

Sometimes I consider taking a horse with me on my travels if I'm going to be away for weeks at a time.  There are many things that I think about with that.  The farms that are options for boarding in the area, the seriousness of the reason I have to go away for work, and most recently, the weather, and quarantine procedures (if any) are a few.

I absolutely thought about bringing a horse with me, which would have been Mochs this time (before she got kicked).  The issue with this is hurricane season was a bit unstable this year.  Taking a horse to Floribama, I mean, the pan handle, during this time is risking being caught in an evacuation.  As I said before, the school I am in right now is mandatory.  I technically belong to them while I am here.  I would run a big risk of getting myself in some trouble or being extremely distracted and worried should the weather get crazy, again, down here.

Also, should a medical emergency arise, I would end up getting myself in trouble as well for having to tend to it while in this school.  I would run the risk of getting sent home and then I would have to come back at another time.  This school is not something I want to repeat.  This school also impacts my career advancement.  Say I had to leave half way through it, there is no guarantee when I could get into another class.  If I don't have this school done by a certain time, my career advancement will be put on hold, and we can't have that because that means more pony money.  See where I'm going here?  You have to think of EVERYTHING.  I don't want to be a worst case scenario person, but you have to be with this kind of stuff.  Not all trips are like this.  Sometimes it is just a training that you can complete at another time if an issue arises.  This particular trip has too much risk for the reasons I explained.

However, there is a positive solution to not having either mare with me right now.  This is a perfect opportunity to learn from other horses, and that is exactly what I have been doing.
Posted by The Jumping Percheron at 11:41 PM

Email ThisBlogThis!Share to TwitterShare to FacebookShare to Pinterest
Labels: This Life, traveling with horses