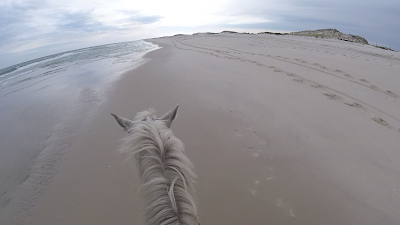 Saturday I met up with a friend for a ride on the beach that we had been talking about since before my last work trip.  I promised we would go when I got back.  And really, who wouldn't want to make good on that promise?  I was excited to go with this particular friend because this friend is fun to ride with and I knew she wouldn't have a problem letting Klein and I have our obligatory beach gallop despite it being her horse's first time to the beach.

We planned to get there early in the day because rain was supposed to come in late in the afternoon.  We ended up having a little delay because when I went out to hook up my truck and trailer, The Beast didn't want to turn over.  It would crank but just couldn't get the momentum to turn over.  Well, that is a result of my own absent mindedness.

I am the only one that drives The Beast.  Since I was gone for five and a half weeks The Beast sat.  I drove The Beast the day after I got home from Florida and it started right up.  I didn't drive it again until I went to start it that morning.  I don't drive it daily, I have a Caddy I drive every day to keep the wear and tear off The Beast.  But, in this case, I should have driven it a couple days last week anyway.  Oh well.  We have had some pretty cold nights already, and that doesn't do vehicle batteries any favors.  I also didn't plug my block heater in because I couldn't find my super long extension cord.

I wondered if maybe it was just that time because the batteries that are in The Beast are 4.5 years old now.  I figured it was just because it had been cold, and I didn't plug the block heater in, which is a big drain on the batteries when you cycle the glow plugs without the block heater being plugged in for a while on a cold morning.  For those of you that drive diesels, you have probably noticed that the glow plugs take longer to cycle on a cold morning when the truck hasn't been plugged in, versus when it has.

The Other Half to the rescue.  Funny, he had just bought a giant vehicle charger last week.  I found my extension cord, after The Other Half reminded me where it was, and plugged the block heater in.  After about 45 mins of the big charger on each battery for an amount of time, and the block heater plugged in, The Beast lit up immediately, cranked over no problem, and Klein and I were on our way.  If the batteries were actually dead I would have just ran down the road and bought two new ones and we still would have been on our way shortly.  Either way, we were going. 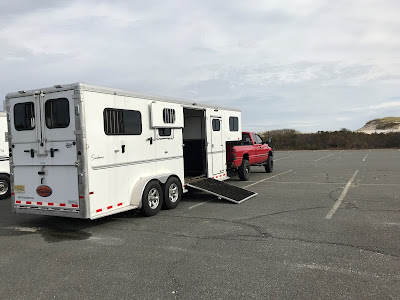 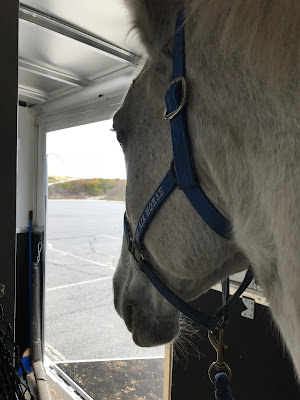 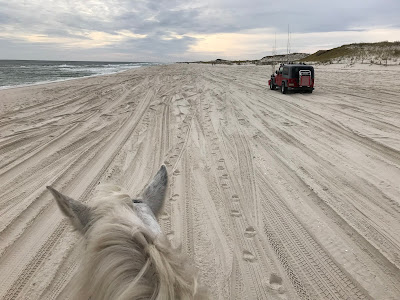 Klein might be getting a little soft as she gets older.  She actually VERBALLY greeted her friend that day.  We ride with them a lot so she is very familiar with that horse, and actually LIKES that horse.  It is VERY rare to hear her say anything to other horses.  She looked out the window for him and everything.  When we went to leave, same thing.  I loaded her first and she looked out the window at him tied to his trailer, and he whinnies for her.  It says something when another horse can hold her attention over a hay net full of alf. 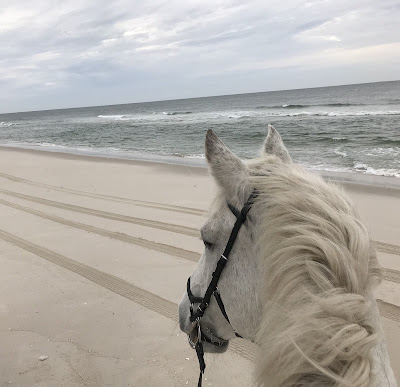 Oh my pretty girl...there is just nothing like spending time with her at the beach.

It was a bit windy, but not too bad.  It was actually a relaxing ride except for the few gawkers that had to start taking pictures and video of us, which we immediately called them out for.  It's pretty funny to me that for some reason random people think it is perfectly ok to get your camera out and start taking video of people they don't know, but when I do it back to them, they flip.  Oh, ok then, it's ok for you to do it to me, but not the other way around?  Explain that.

One guy in a green Jeep that was driving by stopped and immediately began recording us.  So, I got my phone out and started doing the same thing.  He started yelling at me, rolled his window up, and slammed on the gas, almost getting his Jeep stuck in the sand.  What's the problem there, guy?  I don't get it. 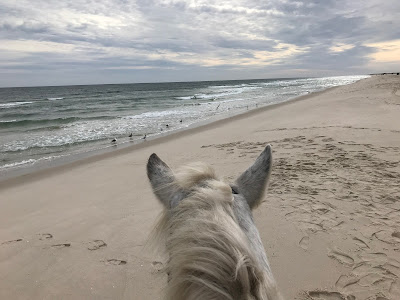 Anyway, this friend and I always have such a great time riding, a few creepers weren't going to ruin it.  We had a blast and it was pretty much a perfect day.  And, The Beast started right up to go home, so that was a relief.  It wasn't my batteries, it was my own stupidity.  I honestly know better than that, but it's been a crazy week since I've been home.  I even thought Thanksgiving was NEXT week, not this week.  So...yeah.  Beach ride was definitely what we needed.

And here is the obligatory beach gallop, because no trip to the beach is complete without it.

Posted by The Jumping Percheron at 9:48 PM