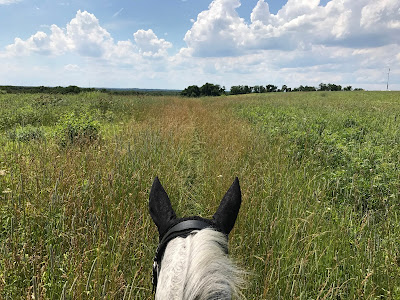 We last had a Mochaloosa update in May.  At that point she was going well in her Renagade boots.  I had her working on the lunge line as well as under saddle.  She continued to stay sound in the Renegades and even without them.  I did a couple test rides with her just barefoot both in the ring and out of it and she was sound.  I even jumped her on the lunge line just out of curiosity to see if it bothered her, and it didn't.  She continued to progress and relax with regular work. 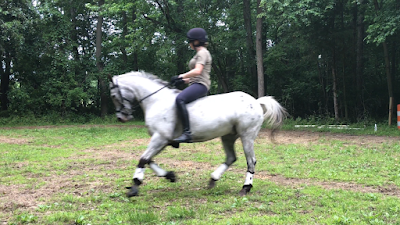 First canter in a year and a half! 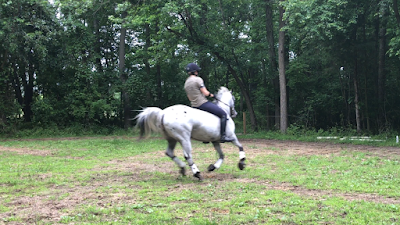 One day I took her out to a WMA alone and for the first time in a long time, she was on the buckle the entire ride.  She was the most relaxed she has been in a long time.  She thoroughly enjoyed being out.  As I got her out more and more she started to relax on the trailer again as well.  That day I took her to the WMA she was silent. Even when I got out of the truck she just watched me from the window until I unloaded her.  Normally she has something to say when her anxiety is up, but that all faded away with miles, as I expected. 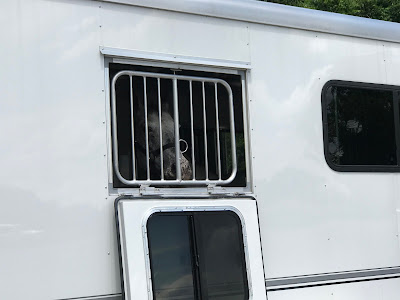 Being a model citizen, standing like a statue and not making a peep while she waits for me to unload her. 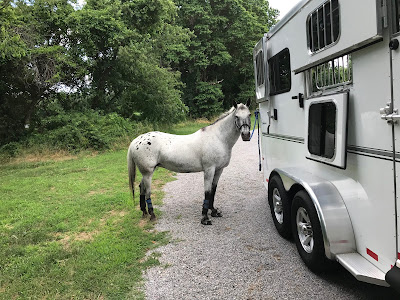 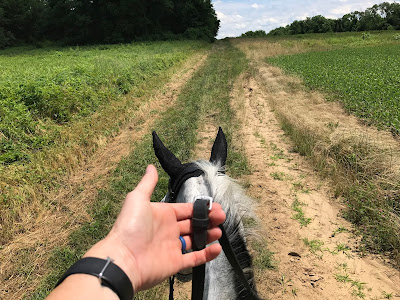 Normally a power walker, she was like this from the first step we took that day. 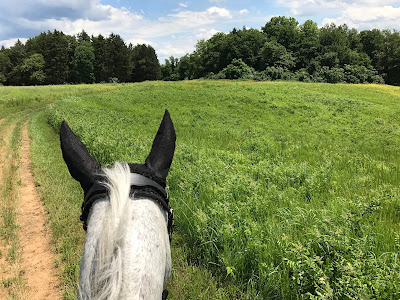 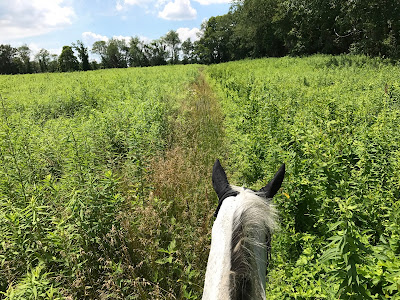 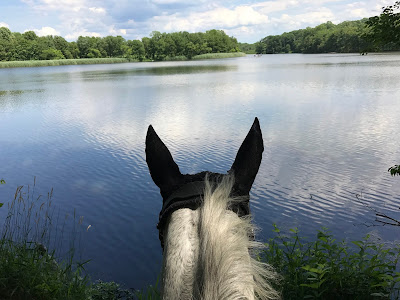 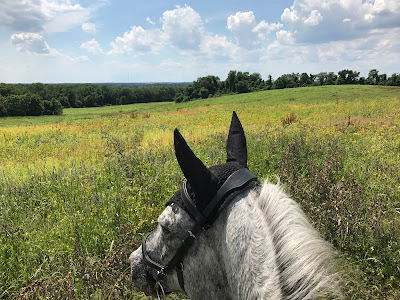 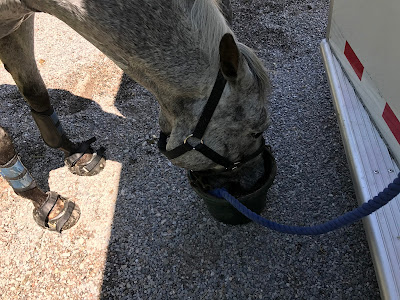 She isn't the best drinker away from home either so I brought some beet pulp to soak while we were out.  It worked, she's a foodie, she can't resist even sloppy beet pulp.  Great way to get some water in her! 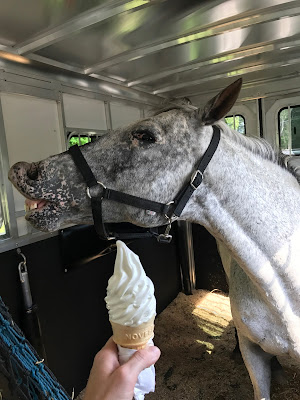 We stopped for ice cream on the way home, Mochs likes her granola bars better.  She didn't make a sound or move a hoof while I waited in line to get our ice cream that day either.

She can be quite a ball of nerves in new places and for hauling once she has a break and stays home for a while.  She doesn't get barn sour, and she has no problems going out alone.  What she does is trembles uncontrollably and gets herself all wound up and worked into a sweat over nothing.  I firmly believe this is a result of previous owners before I bought her.  I really think she had some type of negative experience that made her associate trailer rides with something bad happening to her.  It always goes away though with miles.  It's like she has to be reminded that all we do is go out, ride like normal, nothing crazy happens, then we go home and Klein and Wes are still there, then dinner happens like normal too.  After I started taking her somewhere once a week or every other week it faded away.  She did great when I hauled her and Klein up to New Jersey from Georgia with an overnight stop.  That trip was no big deal for her at all, because I had her out showing not long before that trip.

I also purposely take her places alone.  This way she learns to rely on me and I can prove myself to her by taking her places and showing her that nothing bad happens when we are out together.  Yeah, I could also have drugged her or gave her some kind of over the counter calming paste, but why?  She has to learn to calm down on her own.  I have never drugged a horse for training/riding.  What is the point of putting a synthetic band-aid on something like that?  Either you can ride the horse or you can't.  Why not improve your bond and take the time to show them it is ok?  I think maybe some people just don't have the patience to put the hours in that it requires?

I still haul her in a box stall while we work through that as well.  I don't tie her, I let her have her freedom and see that she's not restrained, she has total control over herself back there.  However she feels comfortable riding, she can, though she stays facing forward in a box stall.  She isn't bad on the trailer either when she is going through that phase.  She just stays stationary and has never given me any reason not to let her ride in a box stall. 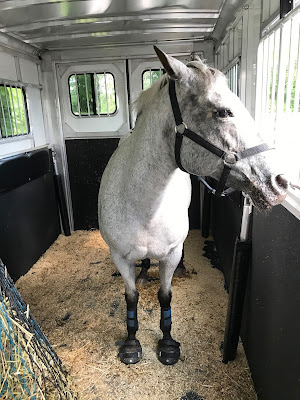 The perks of being a little horse in a big horse's world, getting the equivalent of the VIP suite on the trailer. 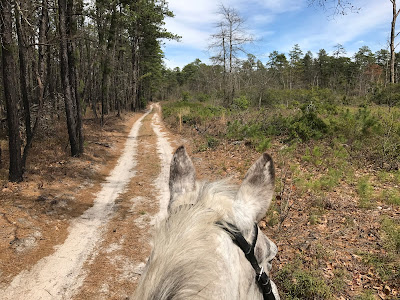 Operation get the pony out. 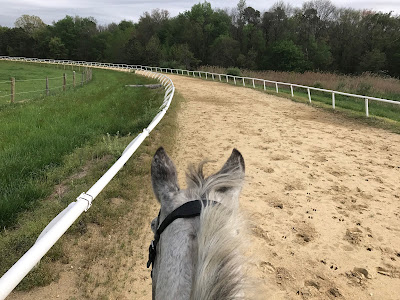 She was going so well I started thinking about front shoes.  Why?  Because Renegades are illegal in the dressage ring, and also, even though she was sound barefoot I would forever be hesitant over certain surfaces.  If this was a horse that didn't enjoy work and going places so much it wouldn't be as important.  Since she likes to be out and about, I wanted to get her to some dressage shows, so I decided to give them a try.  I could always take them off if I didn't like them, right? 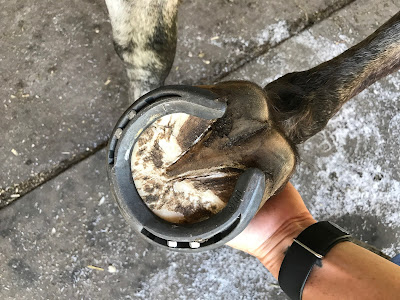 My first pair of shoes on a horse I have owned, ever in my life.  Seriously.  Took me a long time to break that streak, but Mochs did it.

About an hour after she got her first set of front shoes I had a dressage lesson on her.  I was happy to have my instructor there to make sure I wasn't feeling what I wanted to feel.  I thought she felt GREAT in her new shoes, like she was taking more confident steps.  My dressage instructor agreed, and she would tell me the truth if she wasn't looking so great.

After the shoes went on, I started to increase her work load and enter a dressage show...
Posted by The Jumping Percheron at 10:30 PM