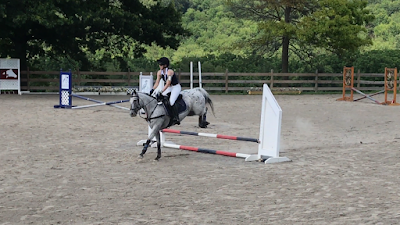 The dressage show I entered Mochs in was early in July.  I just put her in two Intro classes in the Starter Horse division.  Intro A and B.  At that point she had not been to a show in almost two years, and she is the type that needs to go a couple times and have everything be very easy and low threat.  Her little pony mind can get wound up easily.  Intro A and B are both walk, trot.  Doesn't get any easier than that.  This would be a great way to let her have an easy day in the ring and let her just be around the commotion of a show. 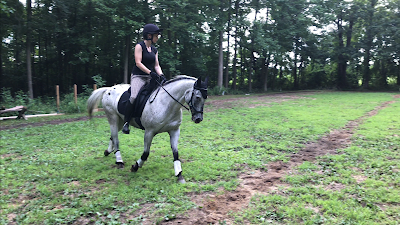 She was her usual excited self as soon as I got on her to head over to the warm up.  I let her walk around on a long, loose rein for a while in warm so she had enough time to get her bearings before we started our warm up.  She didn't really care what was going on, which was great.  She warmed up nicely.  When we went in to start circling the ring and wait for our whistle Mochs was a little looky.  It was just something new for her and then when we went down the center line she was a bit startled by the SUV the judge was in, which was a bright silver SUV with the sun reflecting off it and directly into our faces.  I think she wasn't sure why she had to keep heading straight to this blinding thing and was above the bit and a little unsettled.

Unsettled or not, it didn't matter to me, I took her there solely to just be there and go in the ring.  I really didn't have any expectations, except to ensure it was a positive, non-stressful time for her.  The majority of that very short test was just trying to keep her attention mostly on me.  She made it through with no significant, ugly issues.  We had one ride between our tests so we went out and just waited by the ring.

When we went back in for Intro B I kept her in the 20m area before the entrance and instead of letting her relax to look around that time, I put her to work and she did start to shift all of her focus to me. All of a sudden she started to relax and seek contact.  That was a victory for me, she was focusing on me and her mind wasn't running off with her.  This time the SUV didn't bother her either, thankfully she is a pony where once she identifies something as not being a threat to her, she doesn't care anymore.  It gets filed away in the pony brain as "does not eat ponies."

The second test was noticeably better.  She was more focused and relaxed.  After that I walked her around a little bit more to let her watch the other horses warming up for jumping and dressage.  Then I took her back to my trailer to untack her and have her wait on the trailer.  I also wanted her to have some time just hanging out on the trailer.  She started to talk to the horses in the trailer next to us, but then she went back to snacking on her hay and minding her own business. 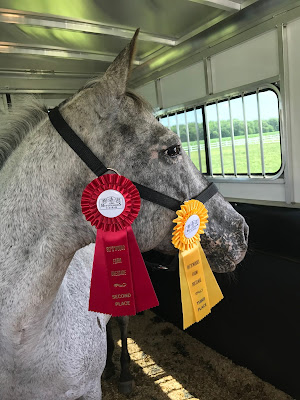 I walked up to get our tests and was surprised to see they were both 60+%.  She was second and third.  As I thought, the second test was better too.  Overall, a complete success.  Funny thing, people I know were there and I rode right by them on her, completely undetected.  I felt like I was undercover because no one up here really knows her.  It was kind of nice. 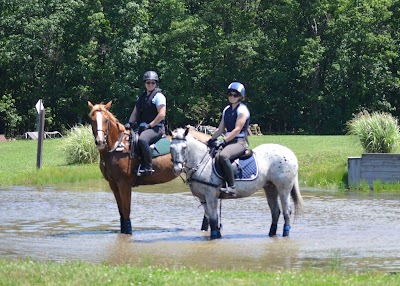 The next day I had plans to meet with Jen from Apping it Up for some xc schooling.  This would be Mochs' first xc school in almost two years, well if you want to call it that because she would be jumping the tiniest stuff they had out there and 98% of that was going to be at a trot.  I just wanted to get her out to another place she hasn't been, so why not trot some tiny fences?  Jen also just happened to have a MW Stubben jumping saddle that she was looking to sell.  How convenient...Mochs is a MW.

My goal with Mochs being sound is to event her.  That is the path we were on before this whole Navicular cyst drama started.  Right now I'm trying to find out just where our limits are, and there is only one way to find out...to get our asses out there and get to work now that she is very comfortably sound. 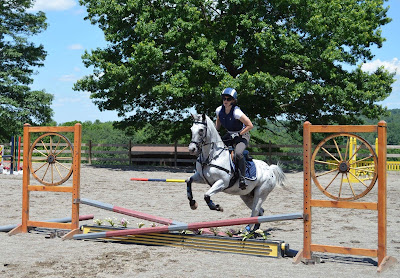 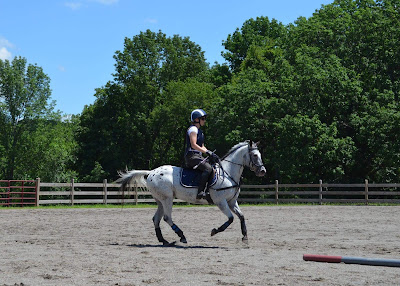 The Stubben fit Mochs great, though it felt a little small for me.  We warmed up in the stadium ring over some cross rails and tiny verticals and Mochs felt GREAT.  I was SO happy!  She went right for everything out of a trot or canter.  The canter she would land in was also very balanced and light.  That wasn't consistent though, and I wouldn't expect it to be because she is still lacking in the strength department.  She needs to be in regular work longer and that strength will come back.  The fact that she even had that canter at all blew me away.  I couldn't have been any happier with her. 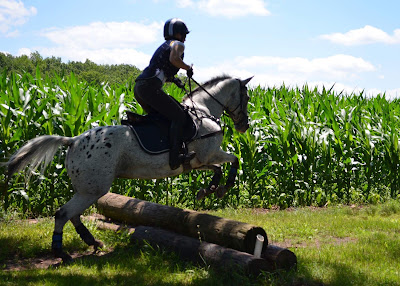 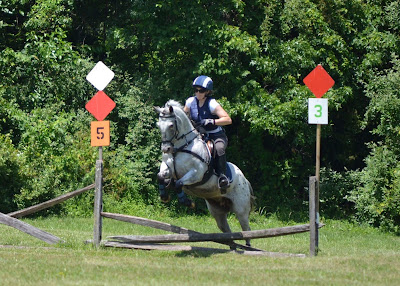 After all that down time she was still her little pony self that goes on the attack to fences.  I actually forget just how viscous she can get to fences.  She LOCKS onto stuff unlike anything I've ever ridden.  She CAN come to things in a balanced, organized, domesticated manner, but excitement and lack of strength contributed to her rushing a little bit right now. 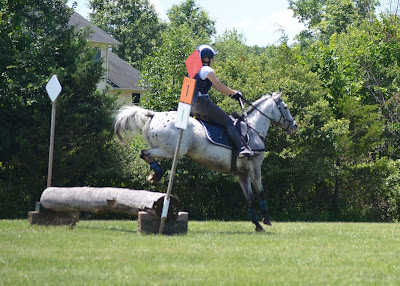 Umm, yeahhh...when your pony locks on and launches you in your too small saddle.  This would be a good one for #failfriday 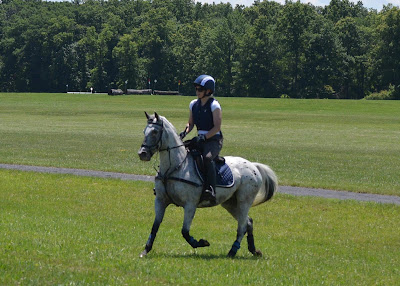 She was happy to go for anything.  She jumped logs, a ditch, a little brush fence, down a bank, went through the water, etc... With the bank, Jen and Mia were schooling the bank and I wasn't planning on doing anything with Mochs on it.  But, Moch started to pull me toward it after seeing Mia go off of it.  So, I let her go off of it. 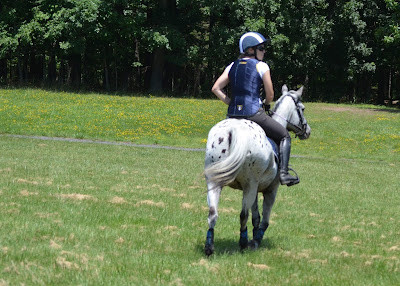 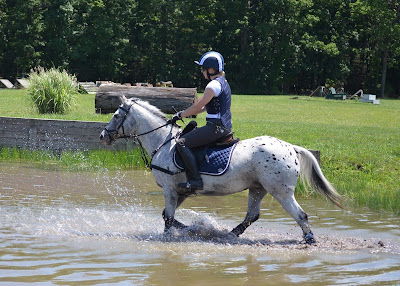 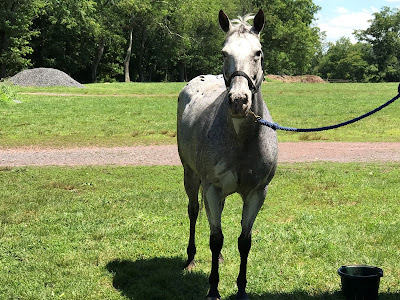 Happy pony after another adventure.

We had a great day!  Jen and Mia were planning to show at the same place the next weekend.  We had tried to plan a show together the month before and it didn't work out.  So, I decided to put Mochs in the smallest CT for fun.  I mean, these are tiny stadium fences she could walk over if she wanted to.  These don't require much strength/balance and the dressage test was just Intro B.  I knew it would be another good opportunity for Mochs to be around the show atmosphere as well. 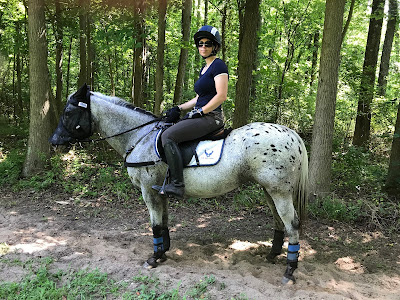 The too small for me Stubben.

The next weekend we headed out to the CT.  My mom was also visiting so that was fun to have her here for a show.  Mochs was distracted that day, from as soon as I got on her at the trailer before dressage.  I got on her earlier than needed so I could walk her around on a long rein and let her just take the sights in.  There were two dressage rings going and stadium along with the stadium warm up ring.  There was a lot for her to look at, which was exactly what I was hoping for.  The show was a full one. 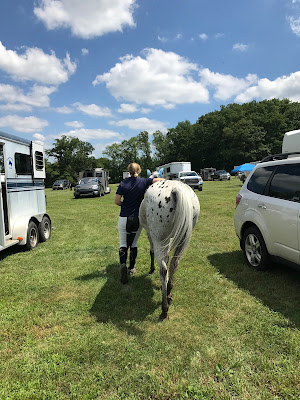 She started to settle when we started our warm up.  I was really happy that again I was able to get her to focus on what WE were doing.  Our test was not as settled.  She was distracted because the stadium ring is right next to the dressage ring we were in.  It is actually a little higher so she was able to look down into the stadium ring.  As we were in our test too someone was taking planks and rails in their round and so Mochs would look over at what was going on.  She tried her hardest to be present in our test but couldn't help but see what else was going on.  We ended up with a 37.5 in dressage.  That's not great, but in dressage land it is still a 60+%.  Though I was not there with any intentions of being competitive.  My victory was getting her attention to come back to me. 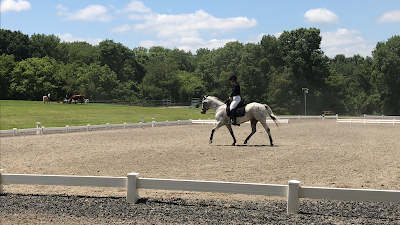 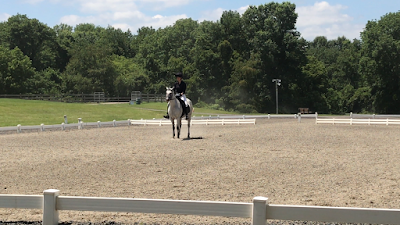 Stadium time rolled around and we headed to the warm up.  I knew she didn't need much of a warm up for that.  Either you can trot/canter tiny fences or you can't.  I wanted her more to be around the commotion of the warm up ring.  She was great for me in there.  She was with me and focused on what we were doing.  I trotted her over the warm up fences and landed in a canter.  I continued that canter back around to them again then just walked around until it was our turn. 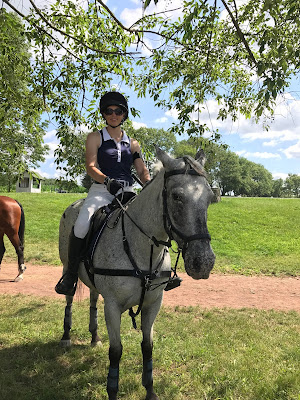 And here she has hit her "I'm not impressed with any of this circus anymore" point. 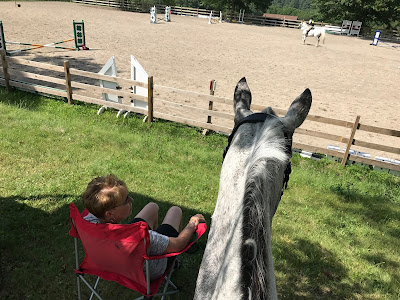 I had her stand by the gate a couple rounds ahead so that she could just watch and be patient until we went in.  The EMT that was standing by the gate couldn't get over how cute she is.  Ha, adorable until you unleash her around some jumps.  I trotted her to the first one, landed in a canter and went to the next.  I did bring her back to a trot between some of them because she would get a little excited and I didn't want her getting all strung out and falling onto her forehand the whole way around.  Even over tiny stuff, she needs to be organized.  She was thoroughly enjoying herself and I had a smile on my face the entire round.  She is just so much fun, I missed riding her so much! 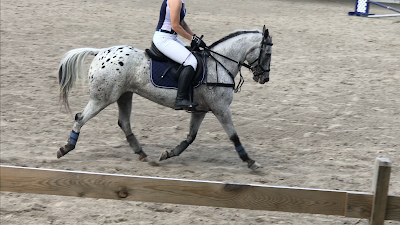 Not thrilled about being brought back to earth here. 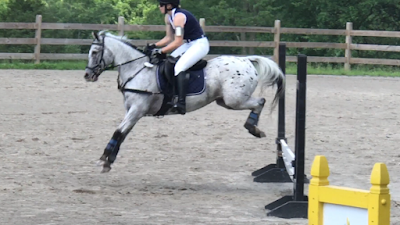 Um, I think you cleared it Mochs.  All I see here is her ability to clear a pretty decent sized ditch out on the xc course. 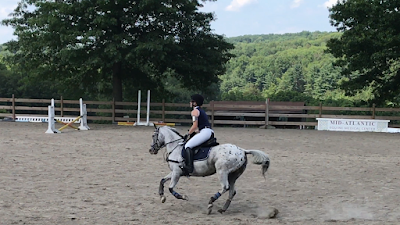 She was having a blast out there and would have gladly went around the course a couple more times.

Surprisingly, she ended up winning the mixed CT division by .1 of a point. 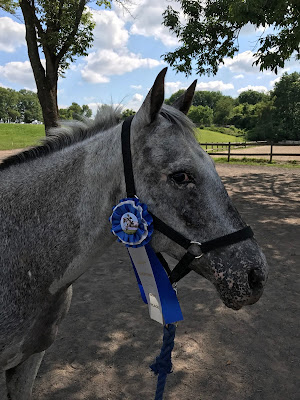 After that show we continued to work on our dressage and she continued to relax and go better than she ever has since I have owned her.  She really enjoys having a job.  We started working on our canter after that show as well.  I was jumping her just a little bit once a week with plans to gradually increase the effort on those days. 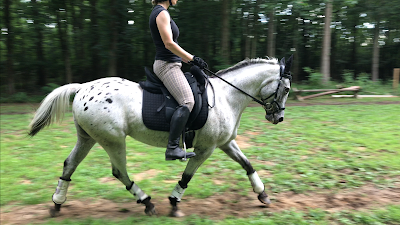 Dressage at home.  She continued to improve with each ride. 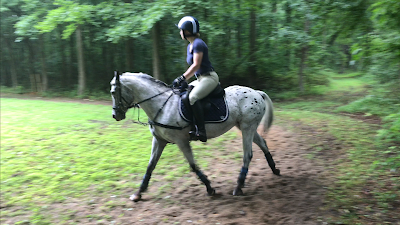 Getting a little jump school in despite being in a down pour.  She was slightly offended a rain drop had went in one ear. 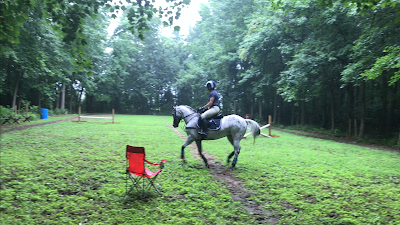 The red chair caught her attention when we walked into the ring that day, so it stayed, and was filed away in her head as another thing that "doesn't eat ponies." 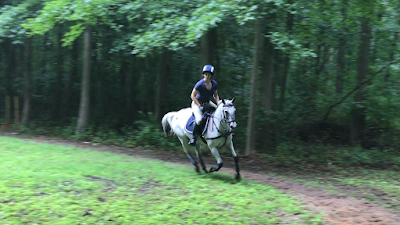 I had planned to take her to two dressage shows in August and maybe do another small CT.  But that all went right out the window on the morning of July 29th...
Posted by The Jumping Percheron at 10:24 PM