Prepare yourselves for some disappointment.  I would say I was prepared considering the down time Mochs had until we got her going again.

The morning of July 23rd I went out to feed.  On the weekends I put them in their other pasture for the day.  I throw their hay in it and then open the gate for them to go into the other pasture.  Mochs normally comes trotting through because she's a foodie and can't wait for the next feeding time.  That morning Klein and Wes were waiting at the gate but Mochs wasn't.  If she's out not paying attention as soon as she hears me take the chain off the gate she'll come trotting in.  I took the chain off and there was no pony trotting in.

Klein and Wes went over and started eating and I turned around to see Mochs walking in slowly.  She stopped in front of the open gate (which she never does) and just stared at me.  I immediately knew something was wrong.  She wasn't limping at the walk, just walking super slow.  I put her in a stall and took her temperature first to see if she was starting to get sick because she will act like that if she has a fever.  Her temp was normal so I started looking and feeling all over her.  When I went around to her right side I saw a mark...a kick mark. 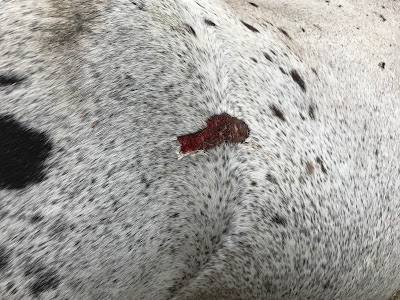 It was still wet with a little bit of blood.  It had happened just before I went out that morning.  I knew instantly it was from Klein.  There is no way Wes could kick that high if he wanted to, and I have also never seen him try anything like that.  He'll make ugly faces, but that's about it.  He doesn't have the rang of motion anymore to kick that high either even if he did decide to act like that one day. Klein on the other hand...I have seen her take aim and fire on Wes and Mochi.  Though it's normally warning shots but they are serious warning shots not just a cow kick in their general direction.  She threatens with double barrels.  She has lightly connected with Wes in the chest before.  She doesn't chase them or corner them or go on the attack, just gets pissy, squeals and fires her warning shots.  If she wanted to connect for real, she absolutely could and she knows it.

Since Moch was walking I decided to give her some bute and sprayed that left side with liniment.  Then I let her eat her breakfast hay and watched her closely all day.  I was supposed to go to a friend's that day but I stayed home and watched Mochs all day.  My biggest fear was that the damage had not set in yet.  I didn't want to leave and come home to find her on three legs or worse.  However, in about an hour she was wandering the pasture like she normally does.  Though she was resting her left hip a lot.  She had no problem putting weight on it, but she would rest it at a standstill.  The kick mark was on her right hip, yet she was VERY sore on her left.  She was obviously kicked into something. 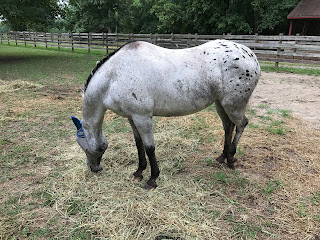 Waiting for the bute to kick in 30 mins after I had went out and found she was hurt. 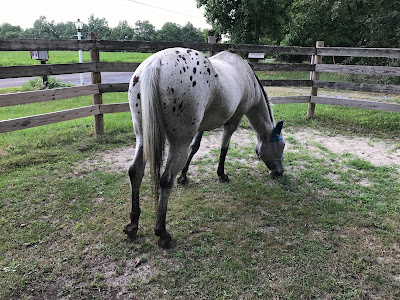 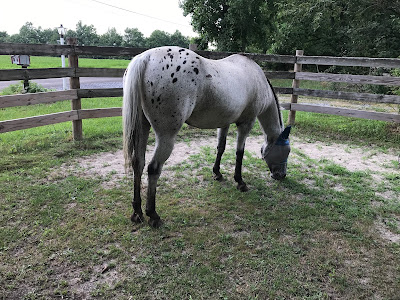 Also day 2.  She was already standing on it normally and not resting it so much.

As I watched her throughout the day she was as mobile as normal, eating, drinking, and pooping fine.  I was also worried about some internal injury because she's a 14 hand pony that took a kick up against something by a 17 hand horse.  She is basically a small person that took a punch from an MMA fighter and somehow didn't get knocked out.  Since she was for the most part acting normal aside from resting her left hip I decided to just bute her for the next few days then have the chiropractor out for some acupuncture and to straighten out whatever got jammed up. 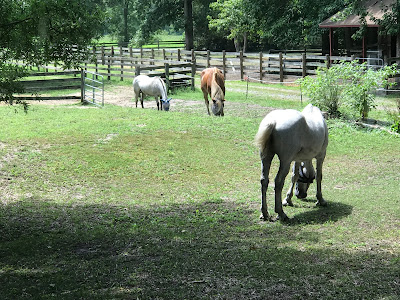 Mochs on day 1.  I left her in with Wes and Klein to see if she would move around with them, which, she did. 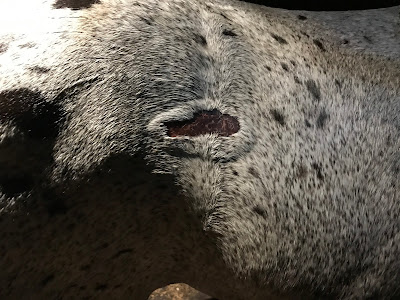 Kick mark cleaned up on day 2.

Throughout the week she continued to improve and gradually stopped resting that hip.  If for any reason she would have started going off her feed or becoming immobile/lame at the walk the vet would have been called immediately.  She seemed to just be very, very sore, which you would expect.  But she also noticeably improved with each day.  The following Saturday was our acupuncture/chiro appointment.  It trotted her for the chiro so she could see how she was moving and she was very obviously off in the left hip.  She was still so sore the chiro actually did not want to adjust her for fear that she may have a fracture in that hip.  Well if I wasn't worried enough already, that did it.  Cue panic and extreme worry.  She did do the acupuncture though and Mochs relaxed with it. 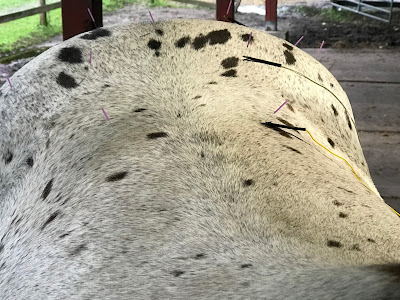 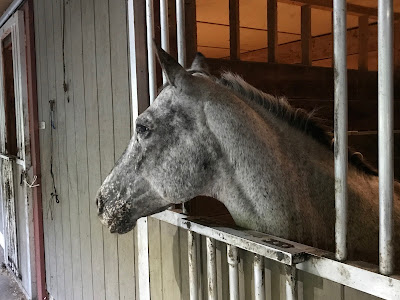 Mochs in lock up, listening to her radio.

After that visit I stalled Mochs and called the vet because if the chiro was worried about it then I need to make sure of what we are dealing with.  In that day that she was stalled a lump formed under her belly back by the sore hip.  There was visible swelling in that side and that swelling was now pooling and forming that lump.  It was soft, you could tell it was fluid.  It wasn't hot, and she didn't care if you touched it.  That lumped form because I restricted her movement.  The whole reason for me not stalling her to begin with is because I didn't want her to get stiff, and walking would help loosen that up and keep the blood moving around that area. 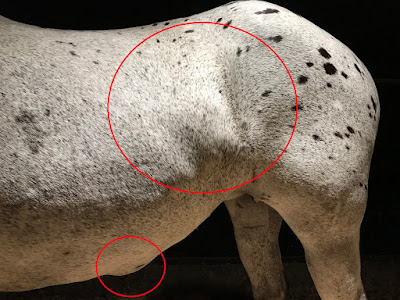 The small circle is the lump, this was the first night it appeared.  The big circle is where the tightness, soreness, and swelling were. 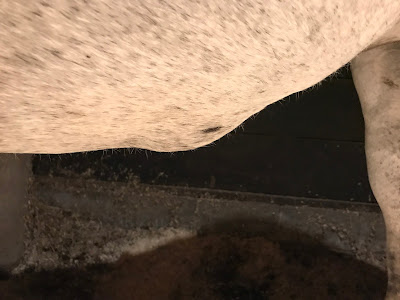 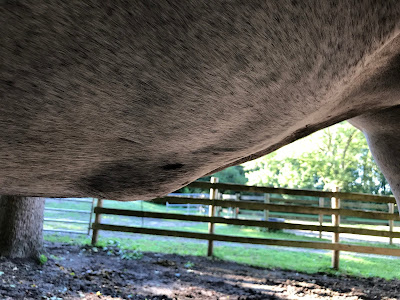 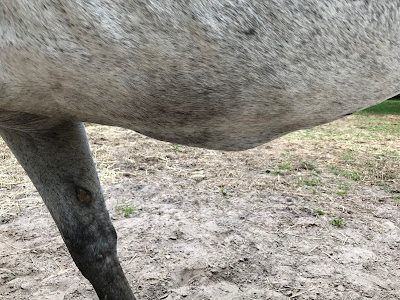 The lump two weeks in.  This is the biggest it got and then it started to disappear over the next week.

The vet was out Monday and examined her.  I trotted her for the vet and she graded her 2 out of 5.  She had improved throughout the week.  The vet said it is possible she could have a stress fracture on the end of her hip which is good because you don't need that part for anything.  She did not feel a rectal exam was necessary because there were no signs of a pelvic fracture (huge relief).  She said we could get a referral and go for a bone scan at the hospital which may show our issue but the treatment would still be the same, rest.  Six weeks of rest and being separated from Klein and Wes was in order.  No stall rest, another huge relief.  One thing that is on the top of the list of things I don't like is stalling my horses.  I hate it.  I feel a little piece of me die inside every time I have to stall them for some reason, which is only when there is a medical reason for it.  We decided to just do the six weeks of rest unless she took a step backward, then we'd go right to the hospital.  The vet also gave me a tube of Surpass, and anti-inflammatory gel to put on her hip. 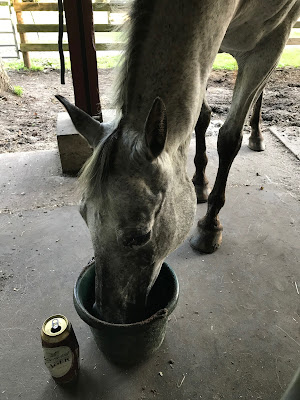 Enjoying a drink together after the vet left.  I sat there with her and drank a couple margaritas.  We were both relieved by the news the vet had for us.

At first Mochs seemed to enjoy having a pasture to herself.  As the weeks wore on, you could tell she was ready to be back in her little herd.  She would kind of watch Klein and Wes.  They were just a matter of feet away from her too.  She wasn't separated to where she couldn't see them, they could see each other at all times, but they were not sharing a fence line.  The reason for the separation is that the vet said IF there was some kind of tiny fracture and she was even just slightly bumped into something it could do damage.  The six weeks of separation would ensure that didn't happen.

I felt bad for her because she was having such a great time being back in work and going all over the place.  Every time I would pull the truck and trailer up to take Klein somewhere, she stands next to it and whinnies over the fence to me.  Some days she'll throw a little fit and run around.  She misses work already.

As far as her going back with Klein and Wes, I am not worried.  My girls have lived together for five years now and nothing like this has ever come close to happening.  I think Mochs was just in the wrong place at the wrong time when Klein and her attitude showed up.  I have never seen Klein attack any horse, or corner them, or go after them in general.  I 100% believe that Mochs was near a tree or in a stall or something similar when this happened.

Throughout her six weeks of rest she continued to improve weekly.  I trot her once a week to see how she looks and make sure there hasn't been a step back.  So far so good. 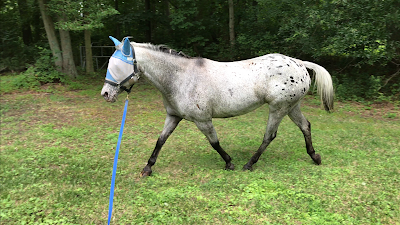 2.5 weeks after she was kicked and she was bringing that bad hip forward almost normally. 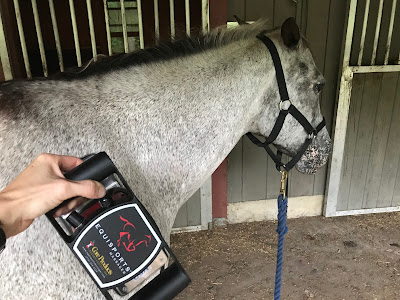 I have also used my Equisports massager on her to help loosen up that area.  She ground ties for this and lets me do as much as I want.

We are a couple weeks past the six week mark now and she is still not sound.  She is very close to it.  I think more rest will take care of it.  She was unbelievably sore on her left side for almost three weeks, I would think there was some very serious bruising in that area due to the visible swelling and the lump that formed from the drainage of the swelling.  The lump disappeared weeks ago. 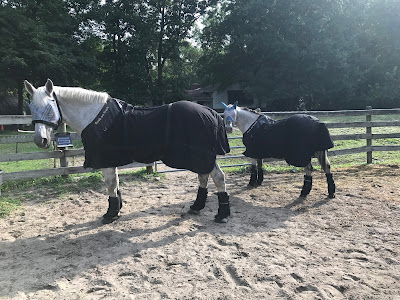 Mochs has also been wearing her Back on Track mesh sheet at night and will continue to do so.  Now that the days are cooling off, there are some days she wears it throughout the day as well.

She will take some sounds steps and then have a couple stabby steps.  This was pretty devastating to me at first, but then it transitioned into being very, very thankful it was not worse, because it very easily could have been.  She was just going so well, but I got her going extremely well this summer and I will do it again after she is healed from this.

I am about to have to go to a school for work that is five weeks long.  The plan is to get on her when I get back.  I think she will be sound then, if not, we'll have the vet back out.  I think the extra rest will be what she needs because she took a hard hit.  Here she is the other night, obviously she feels just fine.


Oh and naturally, two days before this happened, The Other Half bought me this for her since I had sold her jumping saddle a while ago.  That's ok though, it will be waiting for her. 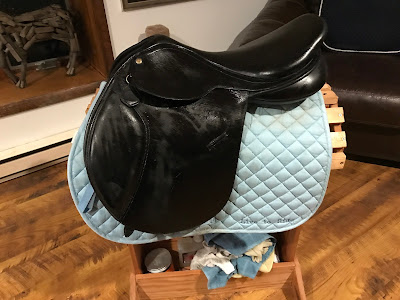 When I get back from my school and assuming she is sound, the plan is to start getting her fit slowly this fall/winter and work on our basics with dressage and jumping, then come out swinging when spring rolls around.
Posted by The Jumping Percheron at 9:21 PM