Wes: A Full Draft Happy and Healthy at 26 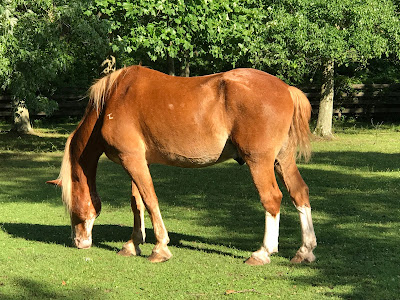 The Handsome continues to amaze me with how great he is looking and feeling at 26.  There are so many misconceptions about full draft horses out there, one of which is how old full drafts typically live.  Recently, on a full draft Facebook group I read some comments in response to a question where people thought that the average life expectancy of a full draft is mid 20's.  I'm here to tell you that's not true at all.  At the carriage barn Wes worked at for a decade, there were full drafts STILL WORKING at age 28.  Excuse me, still happily working and in good health!  It is not uncommon for full drafts to reach over 30 years of age either.  Sure, they probably won't still be working at that age, but they can still be living with a good quality of life.
I'm not sure where people get these ideas.  There is a lot of uneducated information that come from horse owners that have never owned a full draft in their life (not crosses, drafts).  One example being, I cannot count how many times someone that has owned only light horses or a draft cross has told me how much my full drafts eat and it was some off the wall amount that was completely false.  But what do I know about how much my own drafts eat, right?  But what is sad to me that most of the negative comments and close minded ideas that have to do with full draft horses come from the draft community.  As I have said many times before on here, over the years Klein and I have experienced the most hate from our own people, fellow draft owners.  Not draft crosses, DRAFTS.  Full draft owners.  Even those that do ride their full drafts.  But anyway, this is about Wes. 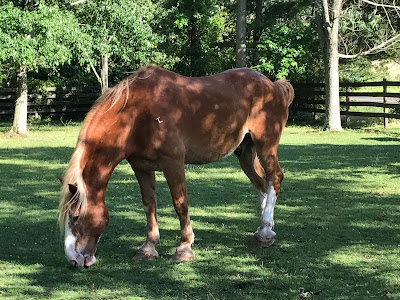 Wes is shiny, dappley, and mentally sharp.  I am a little paranoid that one day he may start spacing out of me, but every indication I have as of right now, is that the day that starts is still quite far off.  He still tries to be sneaky about things and when I call him out, he immediately rights his behavior.  For example, he knows exactly which stall is his.  But, some nights when I let them in from dinner he'll go in Mochs' stall and try to grab a few bites of her dinner.  As soon as I call him by his first and last name he hurries out of her stall and into his.  He knows.  Some nights he'll also try to wander down the driveway instead of across it into his stall for dinner and get some bites of that grass.  Again, as soon as I call him by his first and last name, he turns around and lumbers into his stall.  Or if I do let them out to graze along the driveway or in the backyard while I clean up and make their dinner, as soon as I say "Are you guys ready for dinner?  Klein Baby, Moch Mochs, Wwwwwessss, DINNER TIME!!"  He will come trotting in. 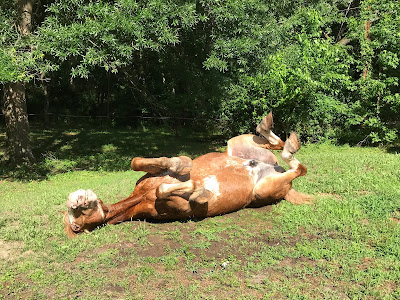 His eyes are bright, he's perky, he's still doing his daily roll.  He has all his teeth and they are all fine, his feet look GREAT.  He is still snippy with Mochs' at times.  They bicker like typical siblings.  No physical fighting just ugly faces and a pretend bite in the air in each other's direction. 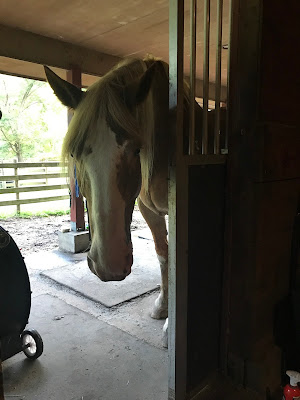 Trying to drop hints that if I could hurry up with dinner, that would be grrrreat.  He also will try to sneak a bite while he is waiting.

An injection of Pentosan Gold still has his arthritic joints feeling as good as they can.  He still has the range of motion to kick at flies bothering his belly.  He can still hear the sound of a granola bar wrapper from across the pasture.  He is still just a generally content guy that is happy just living life with his mares.  I still see him cantering around out there too.  Even this past winter, the mares need sheets/blankets before he ever does.  Remember, he and Klein are both Canadians too.  He gets warmer a lot faster/easier than she does.  He also still grows a winter coat to the degree where the vet here suggested I have him tested for Cushings when we arrived up here.  Which I did for peace of mind, if you remember, and the result was negative as I expected. 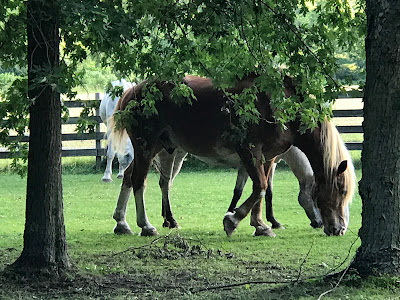 People ask me a lot what he is eating as well.  He gets a 1.5lbs of soaked, molasses free beet pulp, 2lbs of Nutrena Empower Balance ration balancer, with 2 cups of soybean oil every evening for dinner and plenty of good quality Timothy throughout the day and night.  He's a simple guy who is pretty much just high on life.  He's happy to just see the sun come up and hang out with his mares every day.  The retired life continues to be just as good to him as I had always hoped. 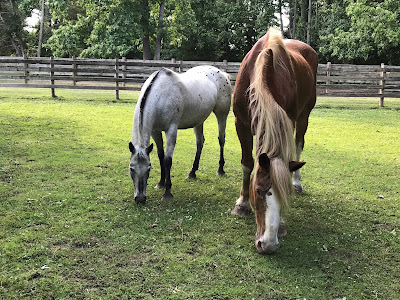 Posted by The Jumping Percheron at 2:31 PM