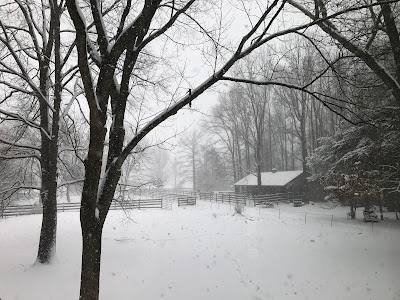 Our first snow of 2017 is here.  I guess that means it's officially winter?  But it will be 50 later this week so, it will be business as usual again here shortly.  Oh, and I recently found out that an indoor just down the road at a barn I school at sometimes just put heaters in their indoor, NICE.  Guess I know which indoor we'll go to when we need it.  Aside from this storm hitting, it actually has been very nice here this winter.  It will be somewhat nice this weekend and I think I will take Klein out to a WMA for a long hack this weekend.

I still am not a winter person.  Though the ponies very clearly are still much happier where it actually gets cold in the winter, so that still makes it ok with me.  Plus, this is the equivalent of summer in the south where the heat and humidity is so crushing you feel like you are committing animal abuse by asking a horse to work in it, so they get a little vacay.  In the end, it all evens out.

We only have one more full winter here before we move again.  Also, having the ponies at home is much easier because even with storms like this, I get to see my ponies all day long.  I can still ride without risking my life driving on the roads to get to a barn somewhere, or just not going and then not getting to see them.  The roads were absolutely horrible yesterday.

Klein and Wes let their maple leaf flags fly in weather like this.  The always have the choice to be out or be in their stalls.  I never lock them up.  I had their stalls cleaned and bedded, nice and fluffy.  Where were the Canucks??  Out in the near white out conditions of course.  Where else would they be? 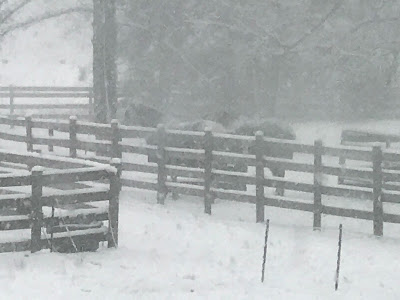 Pretty sure they were out there singing O Canada to each other and reminiscing about growing up in the mother land.

Mochi isn't convinced they know right from wrong yet, and she stayed up on the porch of the barn in front of the stalls and kept an eye on them.

If nothing else, it is kind of pretty, I guess. 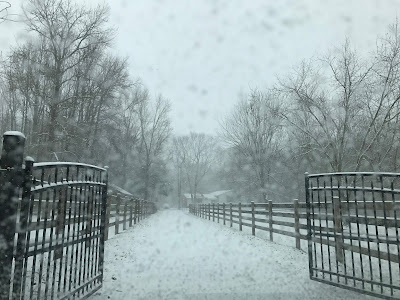 Posted by The Jumping Percheron at 8:00 AM