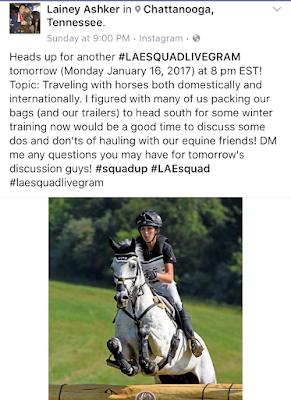 If you guys haven't noticed that Lainey Ashker is doing live streams every Monday evening on Instagram, you're missing out.  As you already know, Klein and I are huge Laine fans.  I have always been a fan and pretty much fell in love with her after riding with her.  Not only is she a successful international 4* eventer, she is also a genuine sweetheart.  She is one of those people that I fully believe would give you her last possession if you really needed it, and her mom is just as kind (easy to see where Lainey gets it from).  They both have hearts bigger than the Cottesmore Leap. 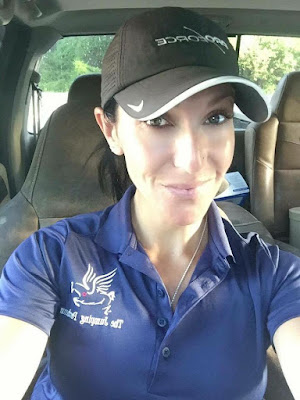 You do not have to be an eventer to benefit from these live streams.  Many of the things she answers are not eventing specific.  She will start with a topic and then, for the last half hour or so, she will open it to any questions the viewers have for her.

With last week's live stream, she covered a wide range of topics.  She talked in depth about her conditioning programs for her horses, which depends on not only what level they are competing at but their breed as well (think Warmbloods vs. TBs).  Her awesome mom Valerie made a guest appearance, you know...the lady that just road an OTTB across the entire country this summer.

Viewers asked them what they look for in an event prospect.  Valerie said that more than confirmation or breeding, she looks for heart and the desire to do the job.  Though they are both hardcore OTTB people, Lainey also said you never, ever put a breed down because they WILL prove you wrong.  They were asked what they do first with their OTTBS when they first come off the track.  Valerie will take them out on the trails for the first few months and let them enjoy themselves.  They do NOT put them into work in an arena right off the bat.

During that live stream Lainey also talked about being a full time college student and competing at the upper levels.  She explained how she made it work.  A lot of people asked what type of degree she has and assumed she has some type of equine degree.  She does not.  She actually has a degree in business with a middle east concentration (that is not the exact way her degree is phrased but I can't remember it exactly).  She emphasized how important it is to go to school and even said that if she gets out of horses one day, she has that to fall back on, which is extremely smart.  Even if she decided one day that she didn't want to train anymore and solely wanted to compete her own horses just as a hobby, she has a plan and won't be a slave industry because she has limited herself.

This past Monday her topic was traveling with horses both domestic and international.  She talked about everything from cost of international shipping to what types of wraps and boots she prefers for shipping.  She said the average cost to ship internationally (round trip flight, travel to and from the airport to the venue) is $17-20,000.  The horses do extremely well on the flights and treat it no differently from being on the trailer.

She is not a fan of shipping boots for anything more than keeping socks clean on a horse.  She prefers to wrap with Back on Track wraps or Back on Track Quick Wraps.  She talked about an incident while trailering once where a horse got upside down in a trailer and the shipping boots did absolutely nothing for it.  She also said she never felt the horse move in the trailer that day (she had been hauling horses for years by this point) and it was that incident that made her invest in cameras for her trailer.  She said that was the best money she has ever spent because there is just no way to really tell what is going on back there unless you can see it.  Something could happen and you'll never know until your next stop, and by then, it could be too late.  This was crazy timing because this was the evening after I took the videos of Klein on my trailer.

For her older horses, she will wrap them in Back on Track wraps and also have Soft Ride boots on them.  She said Al travels like that pretty much everywhere.  Wraps because they provide support, where shipping boots do not.  She also will put a lot of bedding in the trailer for any long hauls for all the horses, and no bedding for short trips.  She keeps the lights off in the trailer at night.

Have an unruly traveler that kicks, stomps, etc...?  Brake check them and give them a reason to keep their feet on the ground, and not stomp a hole in the trailer.  She suggested not coddling that type of behavior and accommodating it.

Rest stops, she and her mom would unload the horses every time they stopped, which was about every four hours or when the truck needed diesel, whichever was first.  They would walk them and let them stretch their legs.  However, that's difficult for her to do now when you are loaded up with six horses on the trailer.  She says she offers them water every single time they stop as well, no matter if they want it or not.  Speaking of not wanting water, she like's JC's X-Tie Up as a great electrolyte supplement for traveling.

I asked her if she was familiar with EquiVibe and what she thought of it.  As it turns out, she has an EquiVibe in her barn and absolutely loves it.  She said some of her horses (Al is one) will actually go to it themselves to stand on it.  She uses it for a variety of reasons and is extremely happy with it.

During both live streams she repeatedly answered the question of if she will be at Rolex this year.  Yes, she is planning to compete again this year with Al (Anthony Patch).  I have no doubt in my mind she will again be one of the most stylish out there for the jog and I look forward to watching Al dance in the dressage ring, the helmet cam from a great xc ride, and a flawless stadium round!  I will be watching the live stream throughout the weekend and cheering them on as always! 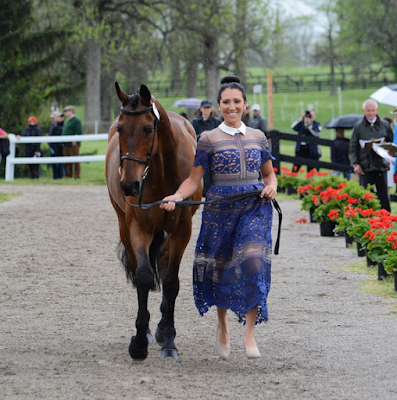 Lainey and Al at the Rolex jog last year.

This upcoming Monday, Lainey will discuss how she combats nerves when competing.  I think she will talk about a book that she loves, Mind Gym.  After hearing her talk about it so much I bought it last year.  I have read it, re-read it, and go back to read parts of it on a regular basis.  This book is EYE OPENING as far as improving your mental game.  I have meant to write a post about it, and I still intend to.  Actually, one of the tips in it is to visualize what you want to look like in your game.  The one HT this year where Klein and I got a personal best of 28.7 on our dressage test, I imagined I rode like Lainey in dressage because, well, have you seen her dressage skills?  I messaged her telling her the success we had that day and that it was all thanks to her because she is the one that prompted me to buy that book and she was also my image of motivation for the dressage ring that day.  Mind Gym WORKS people.  Tune in this Monday and find out what it's all about!
Posted by The Jumping Percheron at 11:59 AM