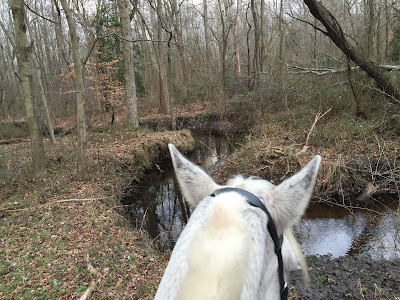 Some of our warm up hack around our property.

Klein and I have been out exploring more lately, trying to see where the best spot for our conditioning work will be.  One ride last week Klein was just an absolute handful.  A half halt was nowhere to be found with her.  Toward the end of the ride I was able to reel her in a little bit with some strong half halts but she was out galloping in her mind.  On days like that it is really tempting just take her out and let her go full throttle, but, that would be a reward for that behavior.  Lucky for her, the next day was a planned gallop. 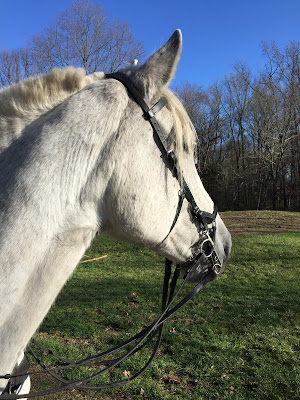 She couldn't be loving this cold weather any more.  That is what I am sure is contributing to her extra enthusiasm lately.  It makes me happy to see her enjoying her new home so much. 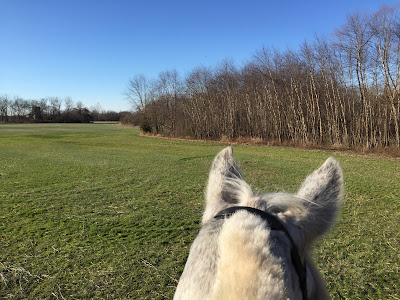 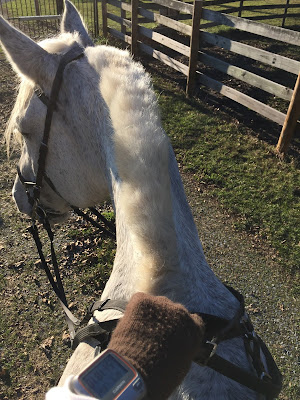 Always have something that can measure your workload, either just time, distance, or time and distance.  I use a Garmin GPS watch.

On our gallop day we did a two mile warm up of walking and trotting then warmed up with some slow canters.  When she was warmed up we did four sets of 2 mins trotting and 1 minute at a 420mpm gallop.  That's a pretty small workload for her but I still want her to get used to working harder in the colder weather.  It was 39 degrees for that gallop.  It has also been a little bit since she's been on a structured conditioning program so that is a good spot to start for her with where she's at right now.  I've started drafting her conditioning plan for this year, I'm looking forward to it.  The more I think about it, the more I want to do that long format three day. 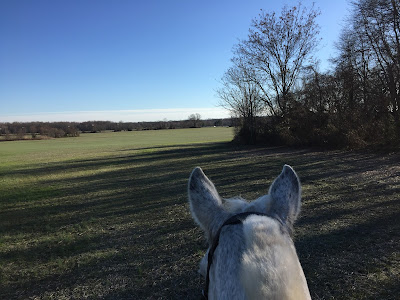 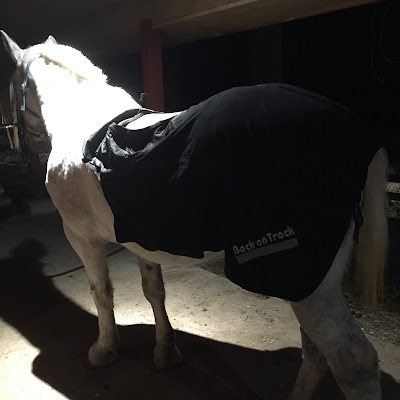 Speaking of cold weather, her Back on Track quarter sheet showed up this week.

One odd thing before our gallop that day, Klein was unusually cuddly.  Anytime this rare opportunity to cuddle her comes around I seize it immediately.  She is just not a lovey dovey horse, she's a business mare. 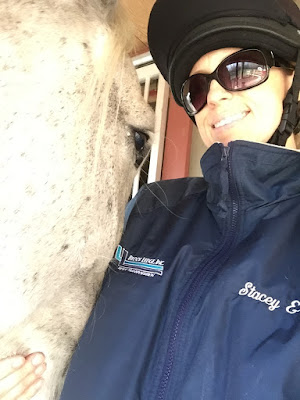 She just wanted me to hold her head.  She would wiggle her nose against me too.  That's her "thing" when she cuddles.  It's pretty adorable. 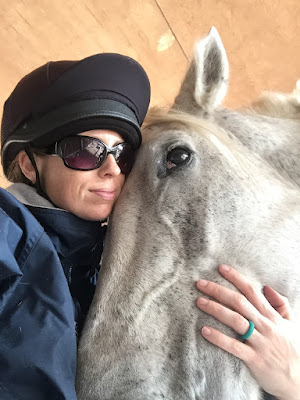 We stayed like this for about 10 mins straight.  BTW, the ring I have on is a Qalo.  For all of you that don't want to get your nice ring messed up at the barn, get a Qalo!  They're less than $20 and you'll never know it's on.  Perfect for the gym too, which is why I got mine in the first place. 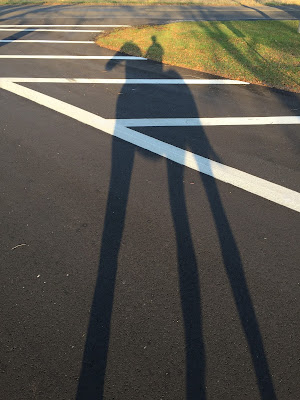 One of our hacks last week.

Quick Moch update, she came out off of her week long stall rest looking significantly better at the trot, even with the ground being frozen that night.  This week is in during the day and out at night.  They are less inclined to act silly at night.  After this week I'll trot her on the lunge line.  If the improvement holds, she will just continue to be on rest from work for another month.  If not, I'm taking her to the hospital for another lameness exam and we're not leaving until somebody tells me what is wrong with my pony. 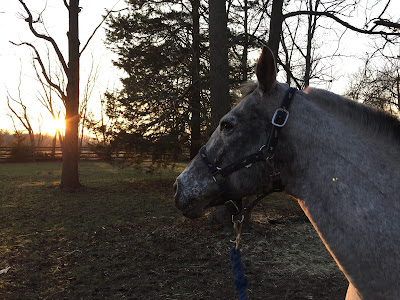 One of her hand walks to stretch her legs during her stall rest.  Clearly she is NOT thrilled.

I would take Moch on a hand walk for a lap or two around the pasture.  She would visibly be ready to leap off the ground and take off, except for that pesky lead rope attached to her face.  You can see in the pic above, she's not a fan. 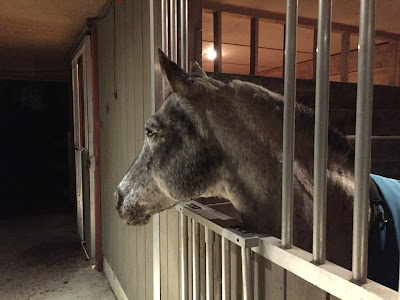 Wondering what she is missing out on by being in. 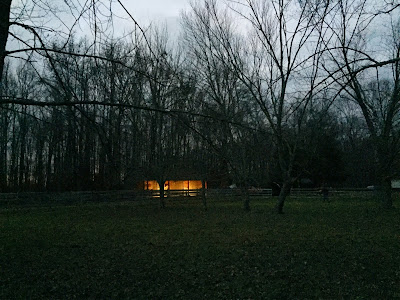 Just a cool pic of the barn from one of the pastures while we were cleaning up. 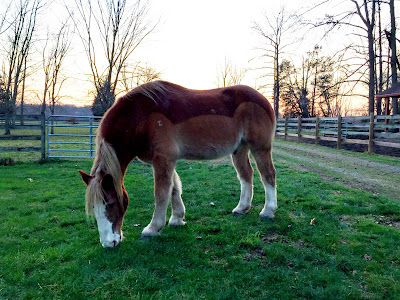 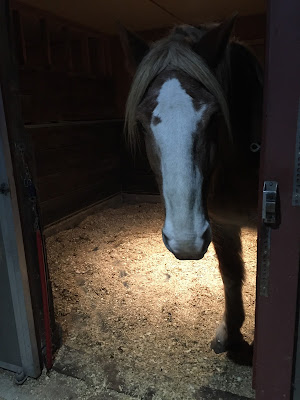 Such a sweet boy, waiting in his stall for dinner.

I never have to tell Wes twice to go in his stall because it's dinner time.  Moch just goes in hers at dinner time.  With Wes I just point and tell him it's dinner time and that he needs to go in his stall and he wanders in.  Klein?  You all should know by now that's not the way it would work with the princess.  She has to roam around and do everything but go in her stall at dinner time.  I have put a rope over her neck and lead her in.  Just the past two nights I have put her grain in her feeder and just waited on her to cave and go in her damn stall.  She will even come to the door of the feed stall and stare at me while I'm making everyone's dinner and then get pissy because I gave Mochi and Wes their grain.  Well, because they went in their STALLS. 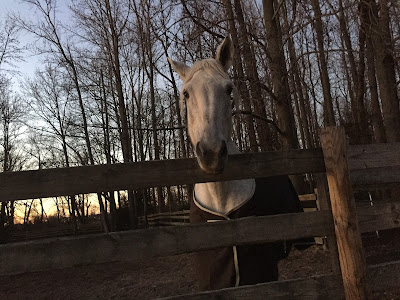 The Fun Police is usually on duty when I pull through the gate.  90% of the time only SHE can say hi to me.  If Wes or Mochi try to come up to say hi, she'll chase them off.  *le sigh*  Oh Klein mare.  I thought she step promoted herself one rank, it's more like three ranks.

Then here we have the epitome of a gentle giant.  He has always been the biggest baby. 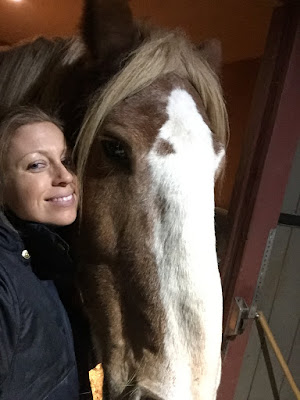 Wes is always up for cuddles. 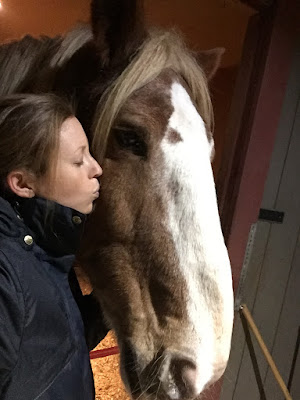 #tbt to when Wes and I worked together in the cold Utah winter! I was bringing him in to harness him and get ready for the night. I wasn't 50lbs heavier either, I just had to wear like 85 layers! #throwbackthursday #Wes #belgian #gelding #notacountry #notaclydesdale #notawaffle #workinghorse #drafthorse #ogstatus #togetherforever #Utah #winter
A photo posted by Stacey C (@jumpingpercheron) on Jan 7, 2016 at 7:30am PST

Posted by The Jumping Percheron at 9:40 PM