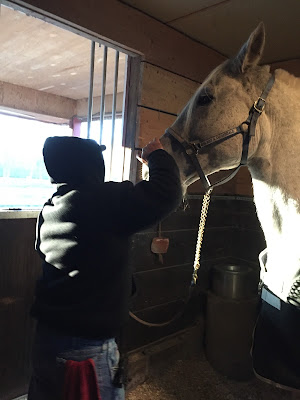 The Odd Couple both got performance floats from an awesome equine dentist this morning.  Klein was coming due for her teeth and I was planning on making an appointment toward the end of this month for her since we got here.  However, about a week ago I could tell that something was up with her.  I KNOW my girl.  She just had this look on her face when I was tacking up like something was bothering her.  I have had her since she was two, "I just know her" is the only way to explain it.  She felt fine under saddle, moving great, super enthusiastic, but she just was a kind of unsettled in the bridle.  That was odd to me because she has been so completely in love with her Micklem since the first day she had it on.  She was still getting super foamy at the mouth but it's like she just wasn't getting in the bridle and staying there like she usually does.  She would get in, then back out, and in down transitions she'd come above the bit.  I thought maybe it's time for a chiro adjustment.  Then it immediately came to me...teeth time.  I knew it.  I knew it was about that time, though the vet said she wasn't quite ready when she checked her right before we left Georgia, and I knew something was up with her just by the look on her face that day.

Our rides since then haven't involved any real contact.  Not until the dentist came out, which was this morning.  This guy comes highly recommended and does a lot of the barns with the big name riders and trainers around here.  As I thought, he immediately said she didn't have a bit seat and he would expect the bit to be uncomfortable for her at this point.  I had not even said one word to him about the bridle thing yet.  He just looked in her mouth and was like "do you ride her?"  After I said yes he said "Did a vet do her teeth last time?"  I said yes, I know equine dentists are generally better (also, no drugs used), but we were in a somewhat limited area before, and now we're not, and it's awesome.  He said the vets don't do a bad job, they just don't specialize in teeth like an equine dentist, which I knew and is why I had him out instead of a vet (no offense vets).  Moch would be due in a few months so I just had him go ahead and do her too.  His son works with him so his son did Mochi and he did Klein.  His son immediately said the same thing about Mochi "She's not bad, just no bit seat."  I am so glad I had Mochi done now too. 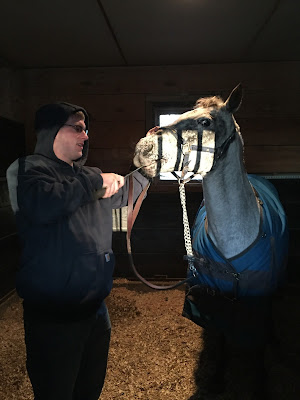 Moch was VERY good for her teeth.

Wes was just done in November, but he also doesn't get a bit in his mouth.  Wes was adorable.  He kept going back and forth and looking in each stall to check on his girls.  He is the sweetest horse I have ever known in my life.  Despite Moch kicking at him for NO good reason right before the dentists got there, he still worries about his girls.

Mochi update, her 12 hours in, 12 hours out just ended yesterday.  So far, she looks fine.  I am going to trot her this weekend and see how she looks.  I've seen her trot around when I let her out, she looks sound.  She's fine at the walk.  Let's just hope that holds true when I actually trot her.  I'm very cautiously optimistic.  Every day I hug on her and apologize to her that she's not feeling 100% and promise that we will figure this out.

Last weekend we got more work done around the property.  The Other Half bought a new toy for himself last week too, a wood chipper.  We have a lot of branches to trim in the pastures and around the ring, and on our little bridle paths. 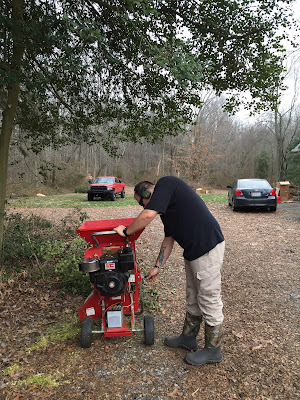 Our only option before was burning everything.  We still are burning stuff, but this chipper is really awesome for the random pasture branches.  You can just immediately get rid of them.  No piling them up and waiting for a good day to burn, or waiting for them to dry out so we can burn them. 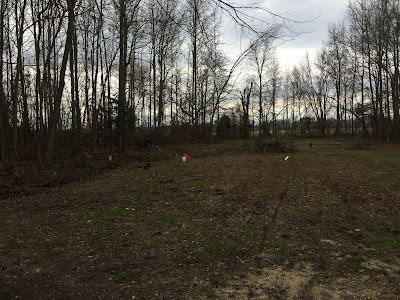 We also had 200 bales of hay delivered last weekend too. 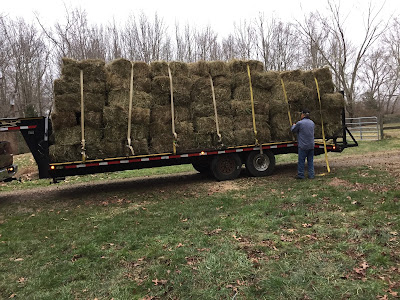 While waiting for the hay guys that morning Klein was running around snorting at something.  SOMETHING had her attention.  I went to the corner where she was and stood on the fence to see what she saw.  It took me a second...  Bow hunters.  She has Eagle eyes.  They were WAY far in the distance across the road.  They were only the tiniest orange dot.  Klein was completely offended for whatever reason out of 345,394,210 and proceeded to buck, squeal, and tear around the pasture for about 35 minutes.  I have video.  I'll post it as soon as I upload it, but here are some still shots from some of her fits.  This is why Moch was in during the day on her 12 in 12 out.  At night, it is way less likely these shenanigans will be going on.  Wes ignores her.  You'll see in the video, he acts like she's not even there.  Moch on the other hand, Moch buys into every second of it and will run around with her and snort at random things. 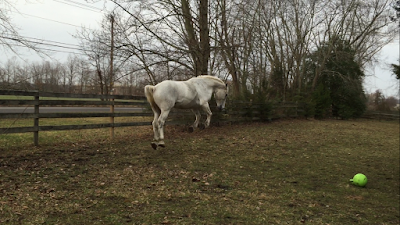 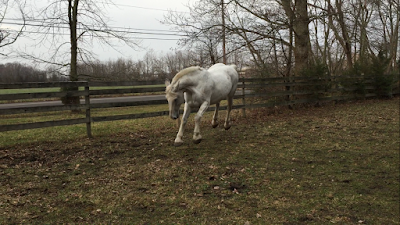 That weekend we also went for a hack and got caught in a down pour.  The skies were crazy but the rain was supposed to be done for the rest of the day. 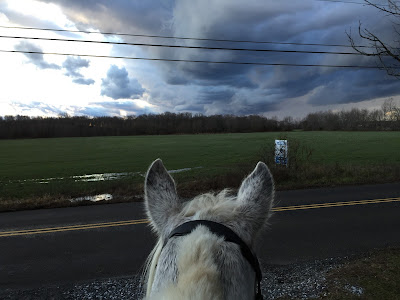 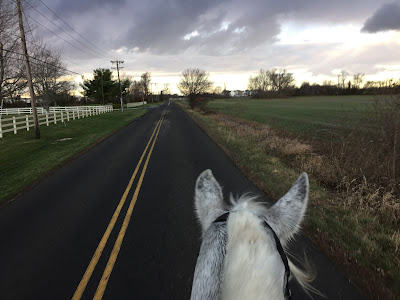 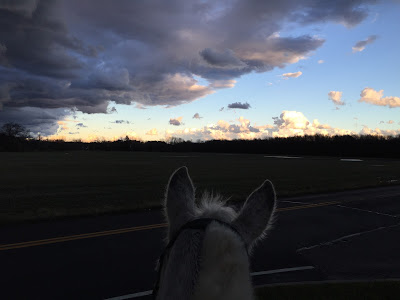 Klein knew it was coming.  After it started to lightly rain on us I turned her around and started walking home.  She did NOT want to walk.  She knew we needed to hurry, and I had a pretty good idea we did too, but I don't want her to learn that when crazy things start happening it is acceptable to hurry home.  About five mins into her insisting we at least trot, it let loose on us.  We still walked calmly home.  The Other Half came sprinting out of the house with a roll of paper towels and as soon as I dismounted he started wiping my tack off.  That guy...he is the best.  Who thinks of stuff like that?!  I thought for sure he at least was watching out the front window to see that we made it back, but as soon as we came through the gate at the end of the driveway he came sprinting out to the barn.

If you haven't heard, the EHV/EHM outbreak in PA is starting to wind down.  Good thing because I am starting to go a little stir crazy from not taking a horse anywhere in more than 30 days.  Travel was to cautiously resume this week, but "cautiously" is still not up to my standard.  We'll wait until the end of this month, and then we'll start getting out again.
Posted by The Jumping Percheron at 11:56 PM

Email ThisBlogThis!Share to TwitterShare to FacebookShare to Pinterest
Labels: equine dentist, hack, horse care, Mochi, The Other Half