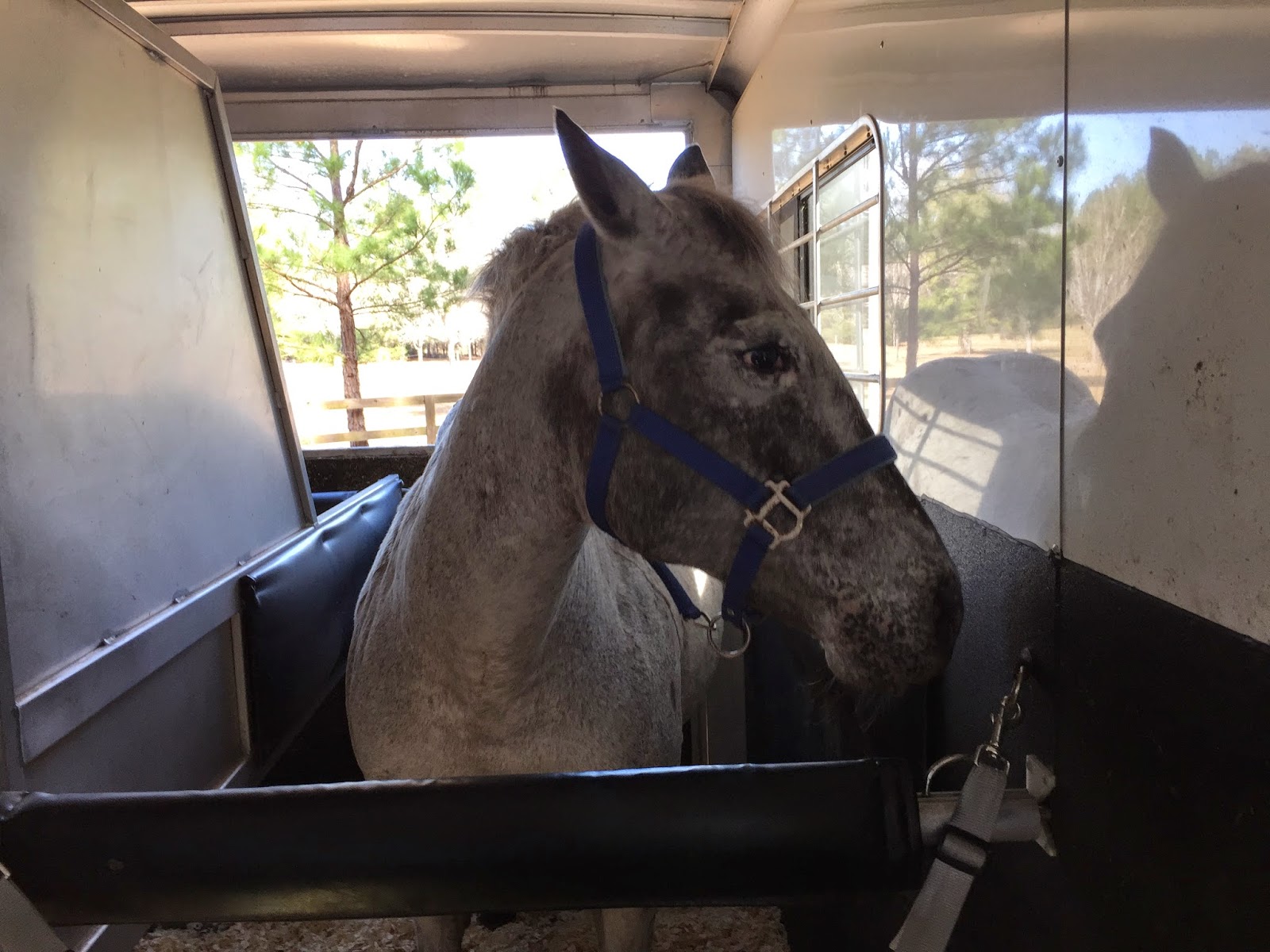 The perks of being a little horse in a big horse's world.  Every thing from the trailer to stalls are super roomy VIP suites.

Sunday I took Mochs to my dressage instructor's house to ride.  We weren't doing a lesson that day because we just wanted to go for a hack. 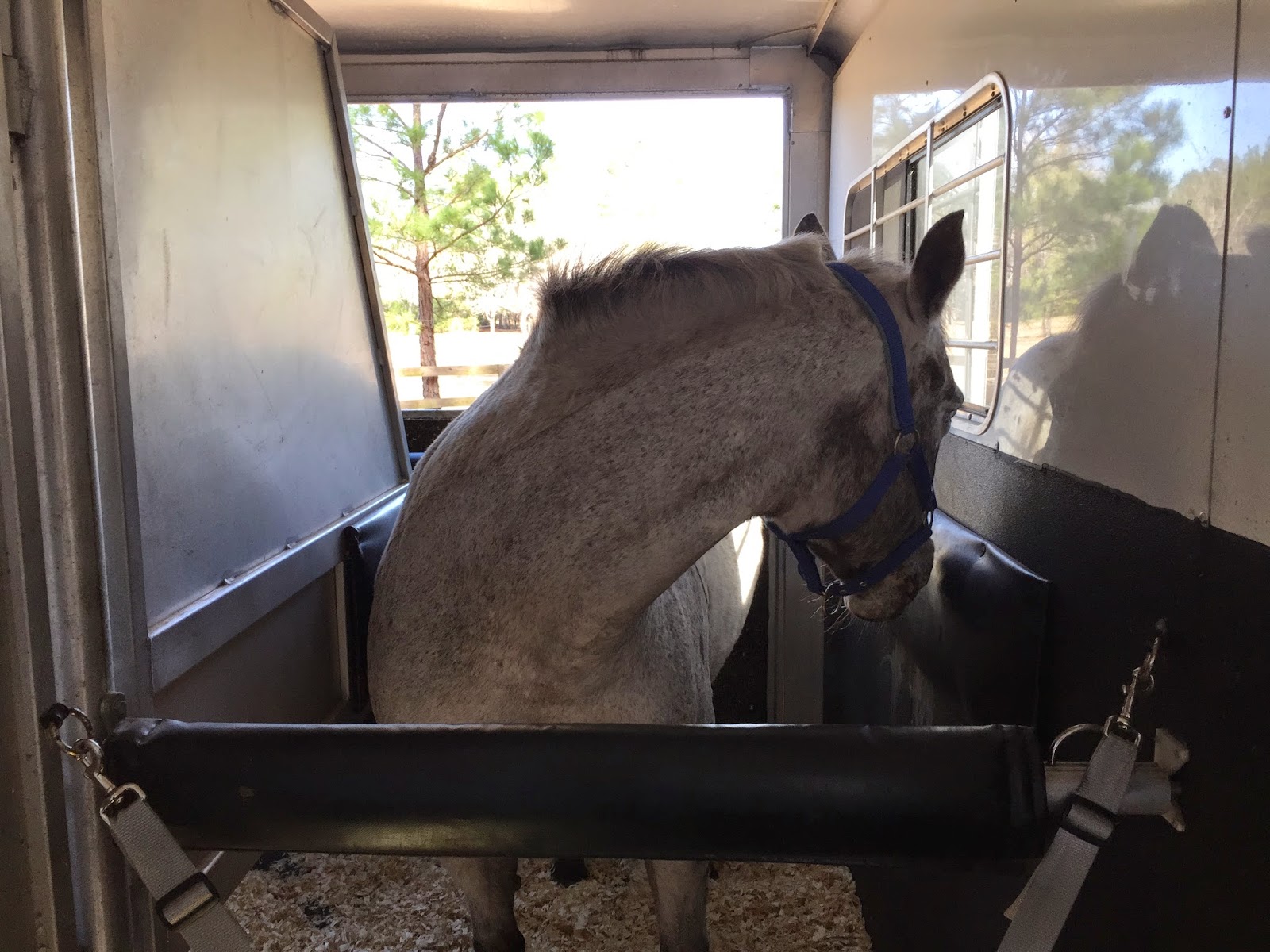 She basically has a stall and a half haha.

I haven't taken Moch anywhere (besides when we moved barns in January) for a long time.  Mainly because she wasn't working.  Now that she is working and we are making some progress and plans, she needs to start going out again to different places.

She isn't a barn sour horse, but she is concerned with where Klein is.  Most times it is out of sight, out of mind. Sunday it was a little more than that.  At first she was a handful.  14 hands of fury, I'm telling you.  She didn't cry or anything, she just was just sooooo forward.  That is how she expresses nervousness.  She gets so worked up for no reason.

We started out around a big field to see if that would just bring her down a notch.  She isn't bad, I just didn't have her full attention.  She needed to relax a little bit.  We did some long trots, some figure 8's in all three gaits, and halts.  She really wasn't coming down at all. 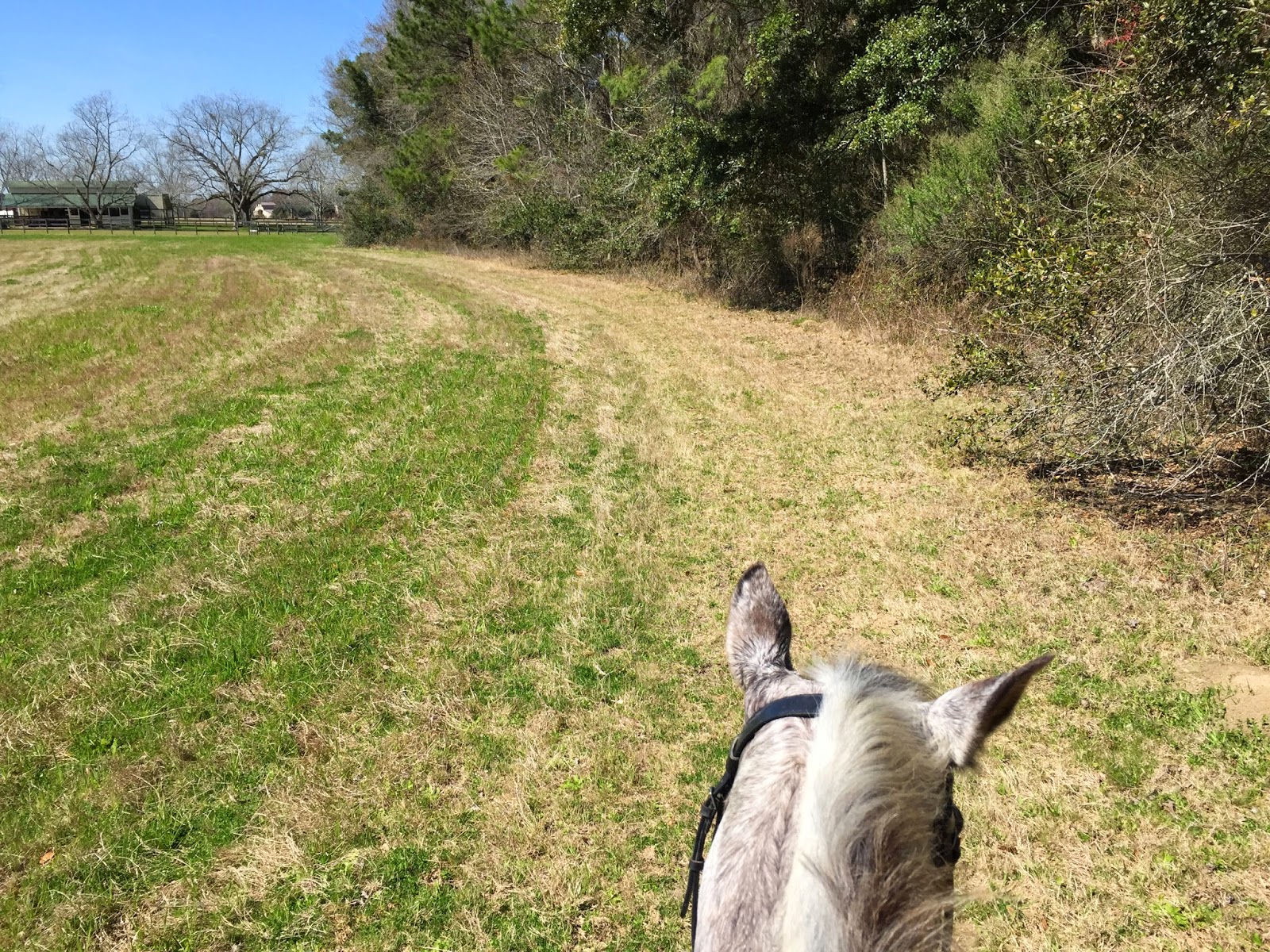 Finally we headed down the road and she relaxed.  She also seemed a little better when she was in front.  Weird because I have never had a horse that cared about where they were when riding with other people.  I really started to question this 25 mile ride.  I promised my friend I would go but, I think 25 miles is not what she needs right now.  If she is like she was on Sunday, that 25 miles is going to seem like 50.

She has been great at home.  Much more relaxed, very manageable.  I know it was the change of scenery that had her wound up.  And Mochs, when her mind starts going at light speed she starts to work up a sweat to go with it. 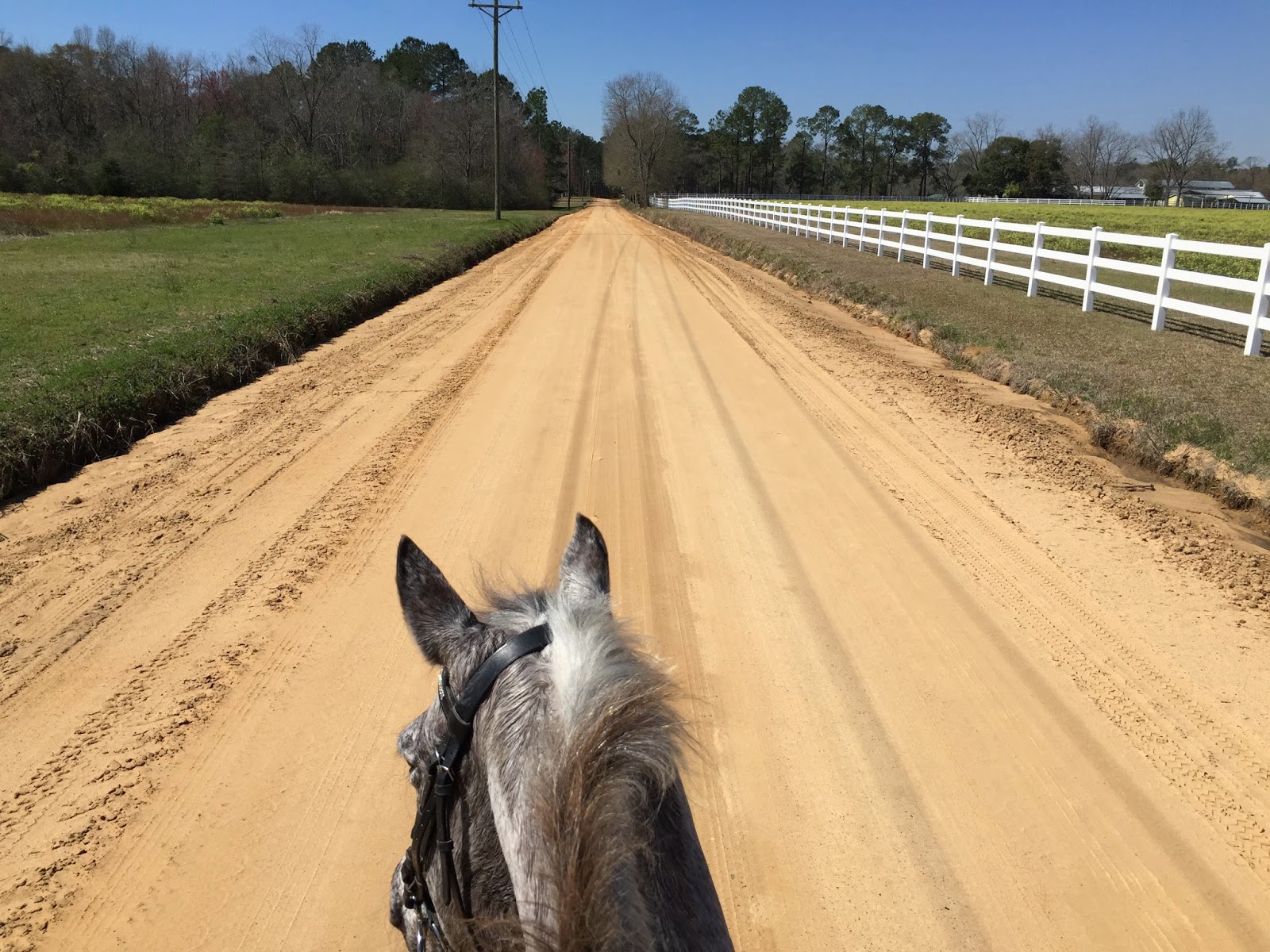 We walked and trotted a while down the road with my instructor and Mochs was definitely a little better.  When we got back I wanted to ride in her ring for atleast a couple minutes, because...well it has Martin's footing (think GGT) and it feels like you are riding on clouds.  I wanted to see if we could calmly go around the dressage ring with Moch's mind present.

We were able to manage in the ring. She finally started to either just relax, or maybe remember she has been there before.  I was pretty happy with how she was in the ring.  She was acting like she does at home.

My instructor finished putting her horse away and I asked if she wanted to get on Moch for a couple minutes.  I really wanted her to get a feel for what I was up against for our future lessons.  She walked and trotted her around for about 15 mins.  Here is just a little bit from that:

That's right...that is Moch.  I told you.  We are getting it together.  She has been putting this kind of work down lately which is a vast improvement from where we had been stuck.  Now, I just have to get her out more, which is easy.

My instructor suggested we stay at the walk and trot right now until she understands that getting under herself is where she wants to be, not pushing to the side.  Once we get her pushing from behind and using that big engine, we can progress.  Fine with me, I'm in no hurry.

Total we rode for maybe an hour and a half.  Nothing more than Moch has been doing regularly for the past month.  By no means did I ride her hard.  But, here comes the weird part.  I had untacked her and hosed her off.  We were standing in the barn aisle when my instructor points behind me to Moch's hindquarter and said "Is she thumping???"  I turned around to see her hindquarter shivering.  Wtf??  She has NEVER done that after a ride, not even in the dead of August pressure cooker Georgia heat and humidity where she is just dripping with sweat after a ride.  Moch is FROM here.  She was born about 45 mins away from where we live right now.

I have seen her hindquarter shiver like that in only one other situation, loading on the trailer.  If she is nervous when getting on the trailer her hindquarter will shiver like that.  And it is always when she loads at home to leave, it has never been after a ride.  Warm weather, cold weather, it's just a nervous response from her.  Was she nervous about standing in a new barn???  As soon as I walked her in a big circle for a couple minutes it stopped.  What WAS that????  I really don't know but it definitely has me wondering.  She acted fine, and when we got home she was her normal self.  The next day she looked fine too and was acting normal.

She is also the one out of the three that bites CHUNKS off her mineral bloack.  CHUNKS.  Since thumps is set off by an electrolyte imbalance I am just having a hard time believing that is what it was.  It wasn't that hot, she's clipped, that wasn't a hard ride, I see her bite chunks off her mineral block, I hosed her off with cool water.  Also, my vet has known Moch years before I bought her.  She actually has ridden her.  Mochs has no history of thumps.  It is nearly impossible to tell being that she was pretty nervous there to begin with.

I am just going to have to take her for a pretty lengthy, moderate ride and see what happens.  I will do it at home where she is 100% comfortable too and nerves can't be a factor.  That pretty much seals the deal on not doing the 25 mile ride.  Until I figure out wtf.

Also, my instructor recommended I reconsider for the sake of her little pony mind.  She was just so full of concern.  She would work herself into a nervous sweat before we ever left.  I am pretty confident she can do a slow 10 or 15, which that ride does have.  I might switch to that, or I might not just take her.  That is not what I want to focus on with her anyway, it was just a fun goal with a friend.  It would also be great for her to get out and spend the night away from home.  If we decide to just not go that weekend, I'll still take her somewhere to have some fun.  Maybe the beach.
Posted by The Jumping Percheron at 11:22 PM