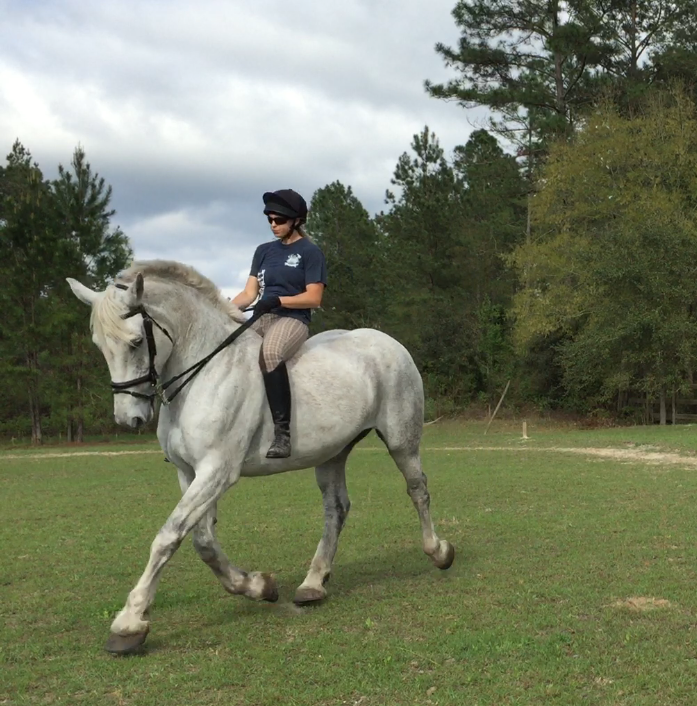 Letting my girl feel a little more normal after our week long battle with a ventral edema.
A week ago last Sunday, the 15th, Klein had what appeared to be an insect bite that was a little swollen.  It was about the size of a small egg and had a little trail of blood.  I didn't think much of it because every horse gets a bite every now and then that gets a little swollen for whatever reason.  It happens to people too.  She doesn't have a history of allergic reactions to insect bites either.

The Other Half looked closely at it to make sure it wasn't a tick stuck in there or something, but there was nothing.  It was just some random bite.  So I didn't take a picture of it because I really thought it wasn't anything to be overly concerned about.  I rode that day and she was fine.  It didn't bother her at all, I don't think she even knew it was there. 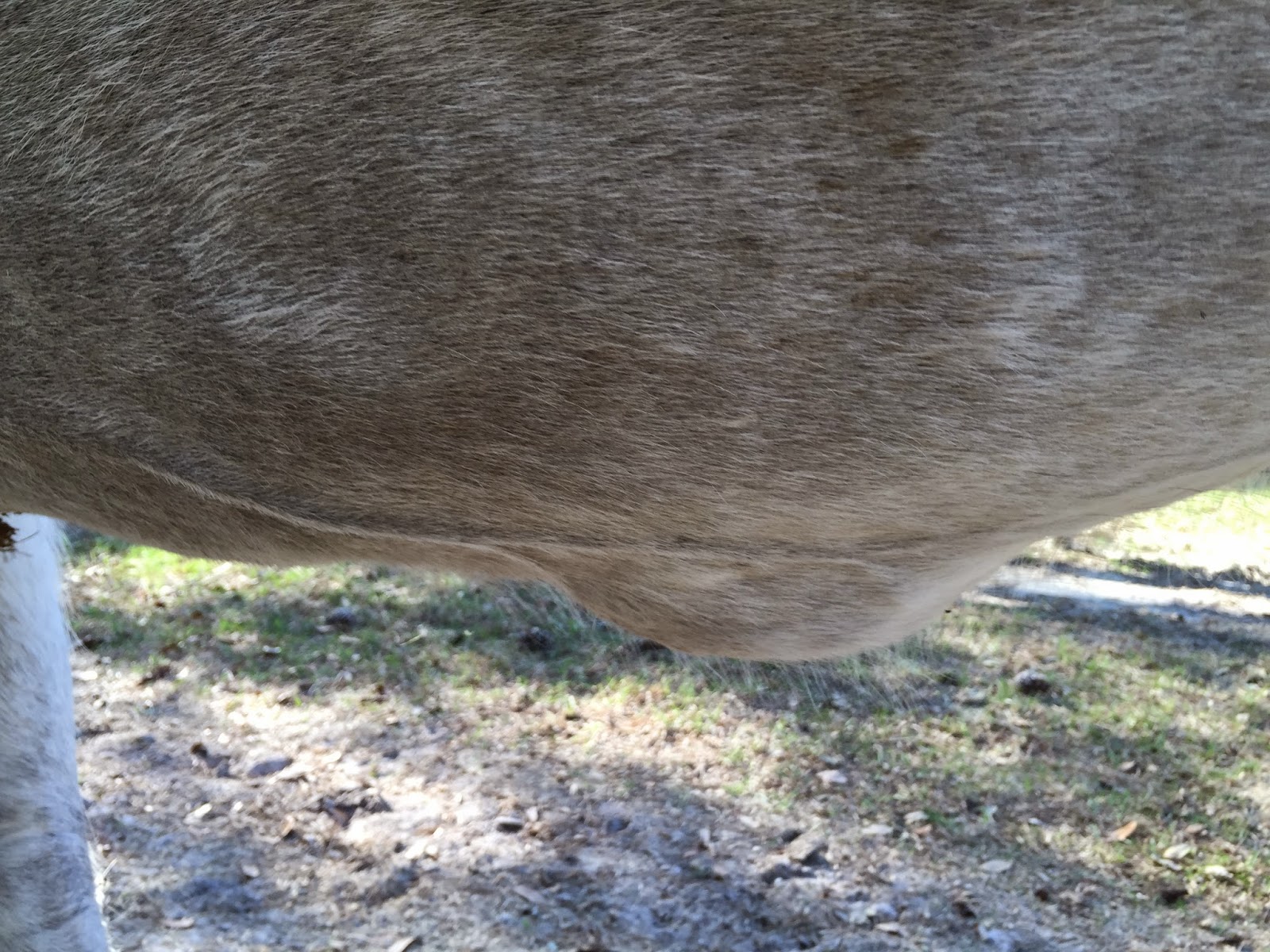 The next day, Monday, it was swollen to about double the size it was.  That concerned me and the photo documentation began.  I texted a pic to my vet and said if it grew anymore we need an appointment asap. 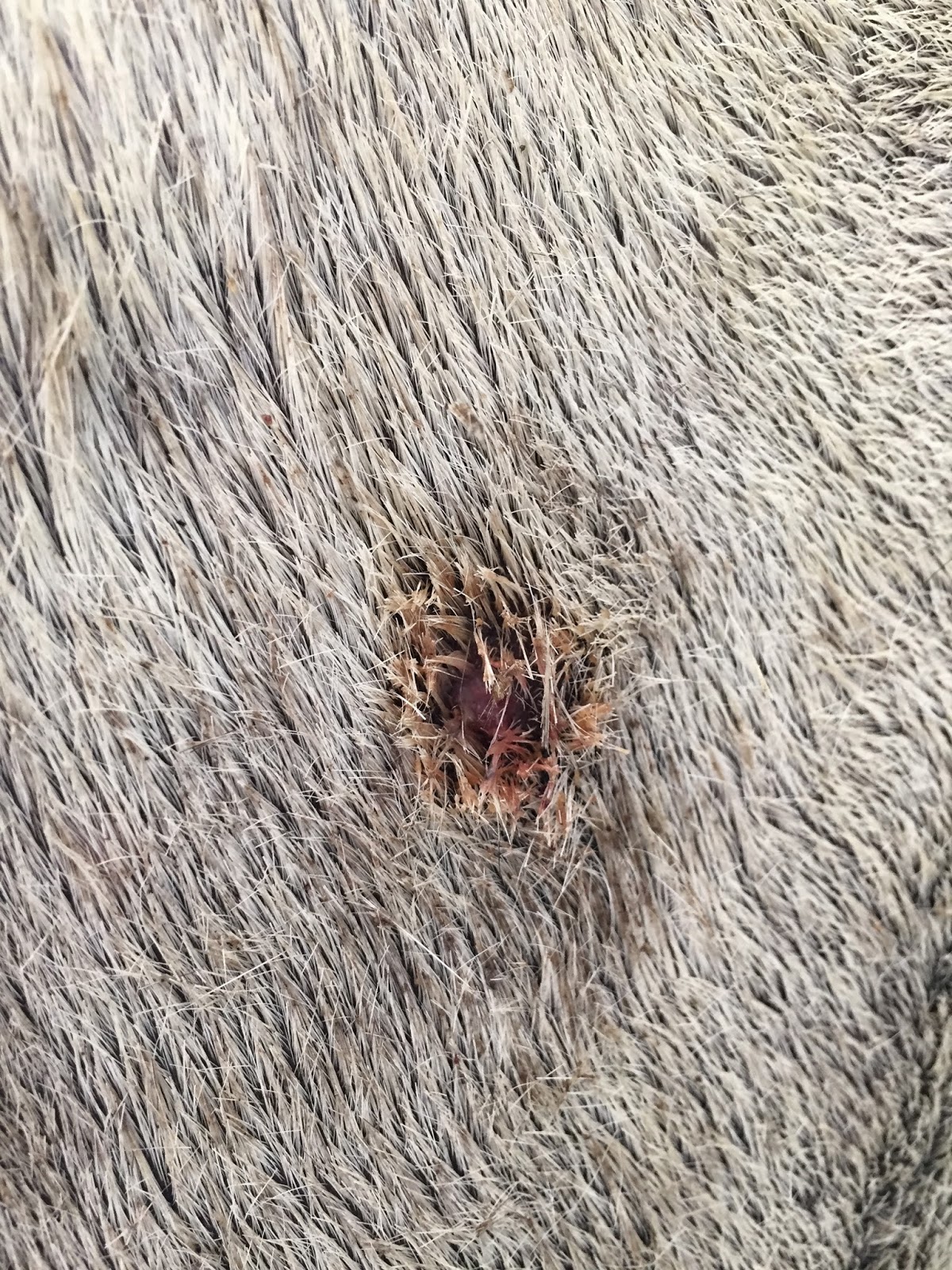 The actual bite on day 3. 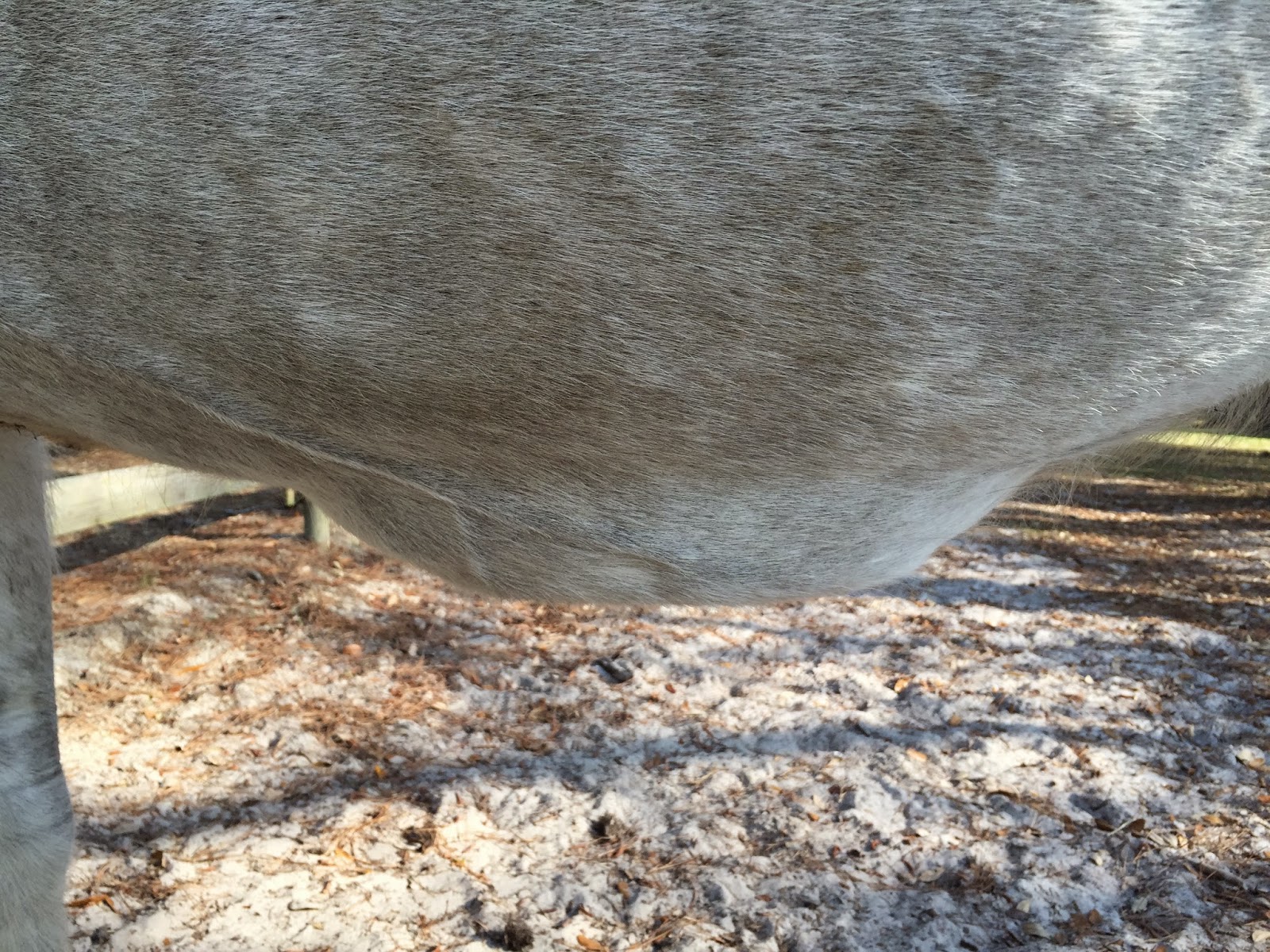 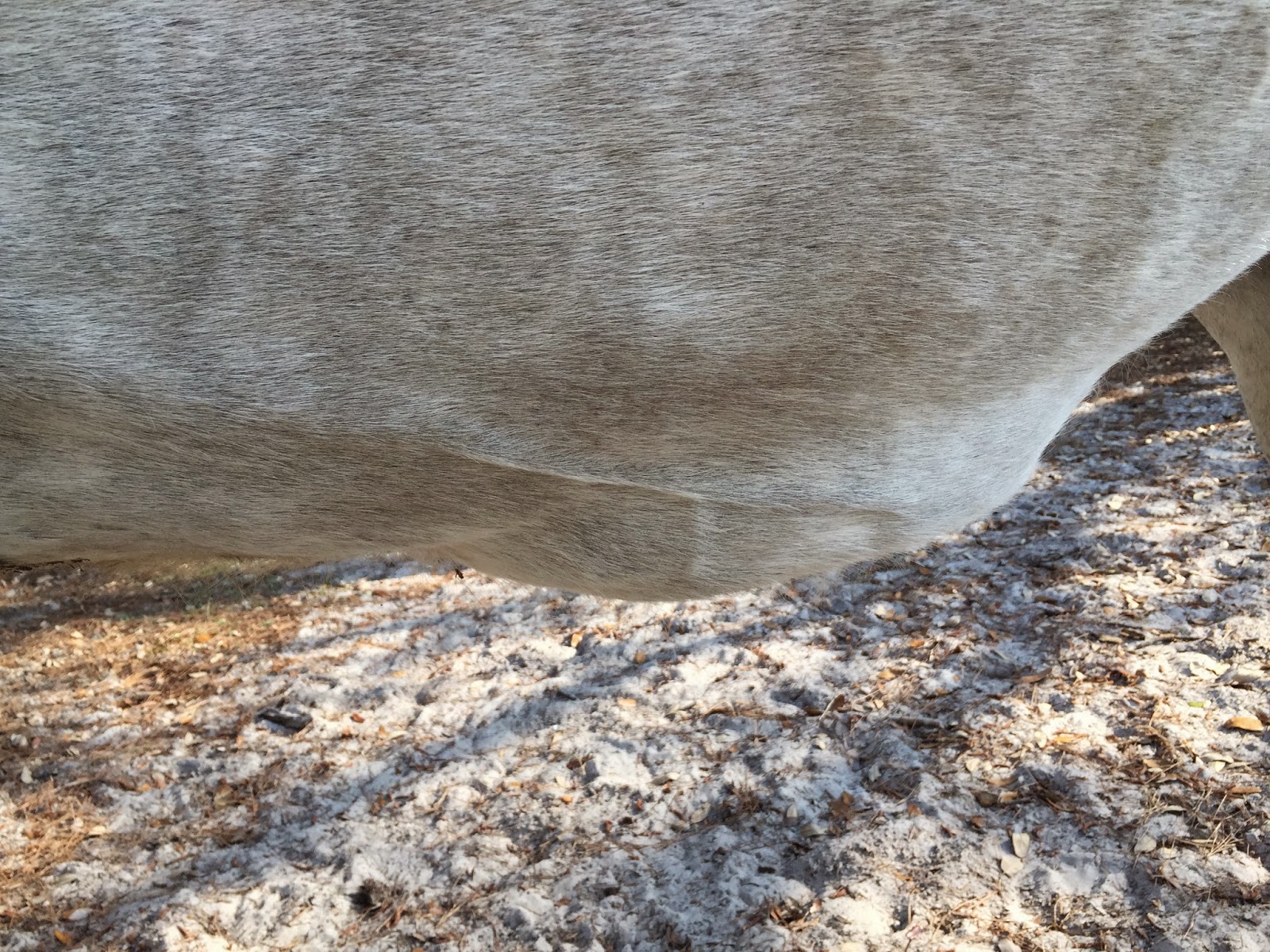 You could push on it and it would indent like memory foam then slowly fill back out.

Much to my disappointment, it was bigger the next day.  There was also a little bit of pus coming from the bite.  I squeezed it and nothing else came out.  Klein didn't care when I messed with the swollen area too.  She still seemed unaware it was even there. 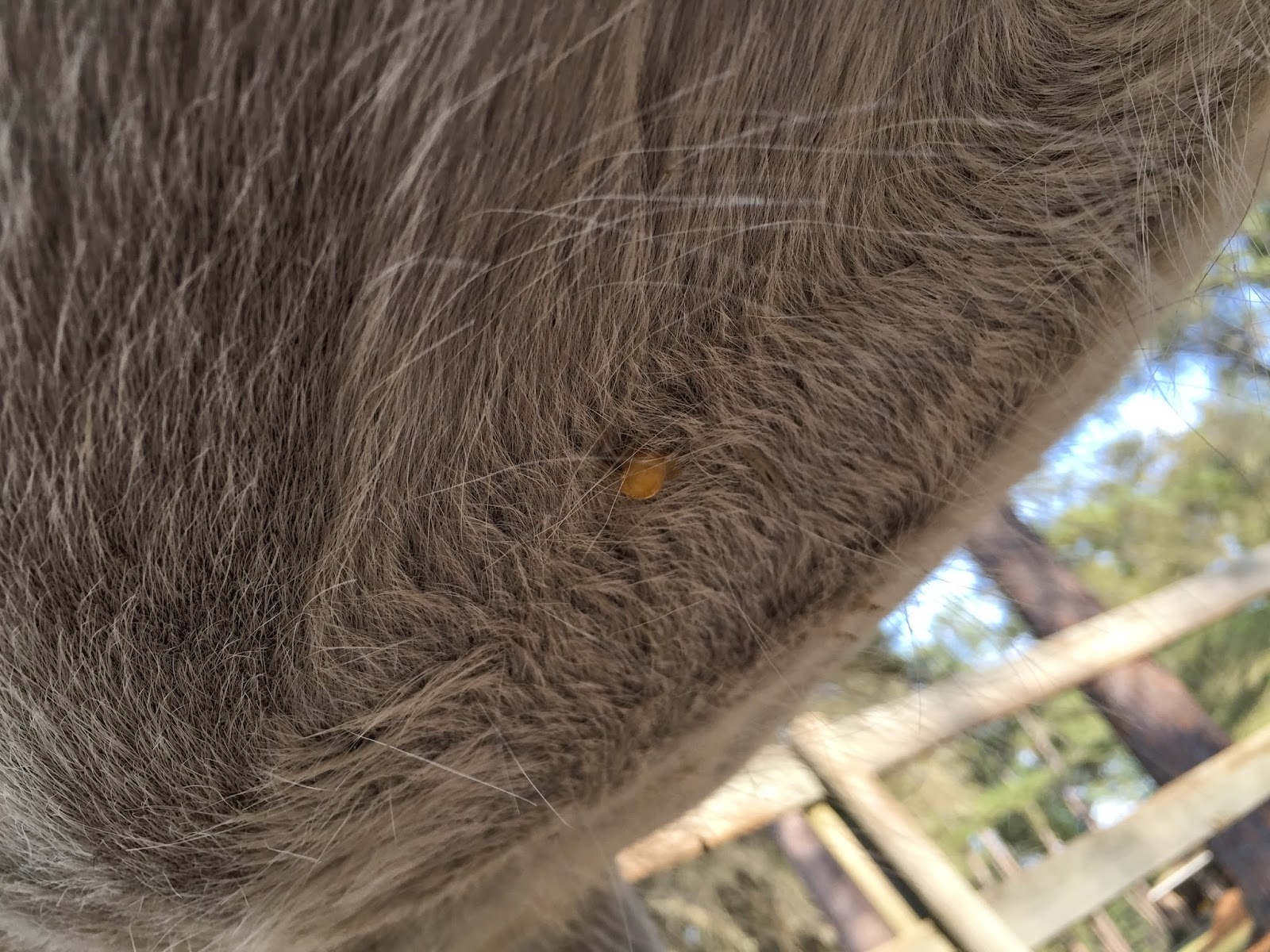 The extent of the pus coming from the bite. 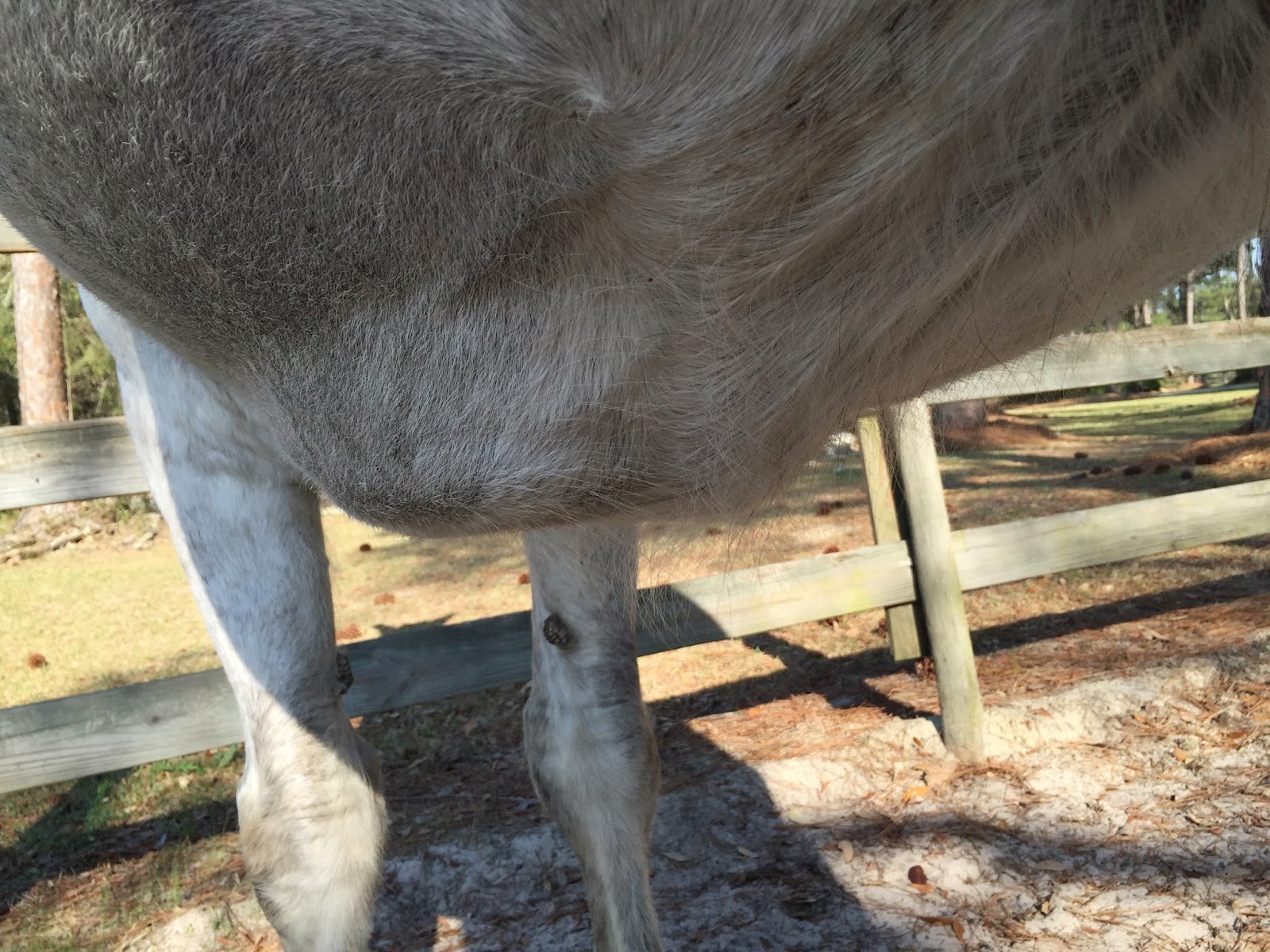 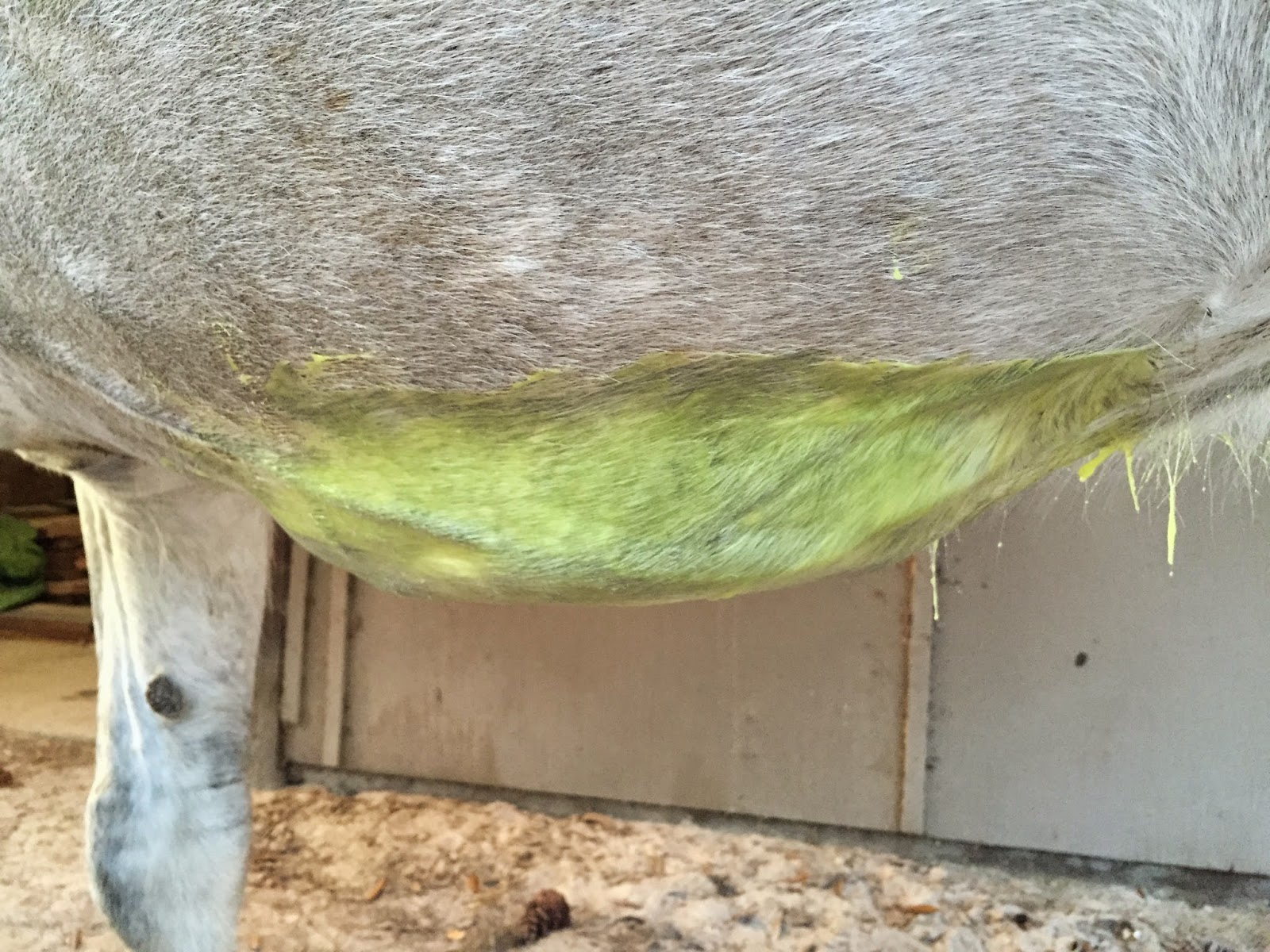 DMSO and Furazone.  Not that effective when unable to be wrapped for a sweat, but it was worth a try!

The vet came out to take a look at it.  We thought maybe there was a foreign object in there that she had caught while rolling around and rubbing her belly on the ground.  She did an ultrasound and couldn't see anything.  She also stuck an instrument into the bite but there was no track to it.  There was no pus draining beyond the little bit that I had already cleaned off. 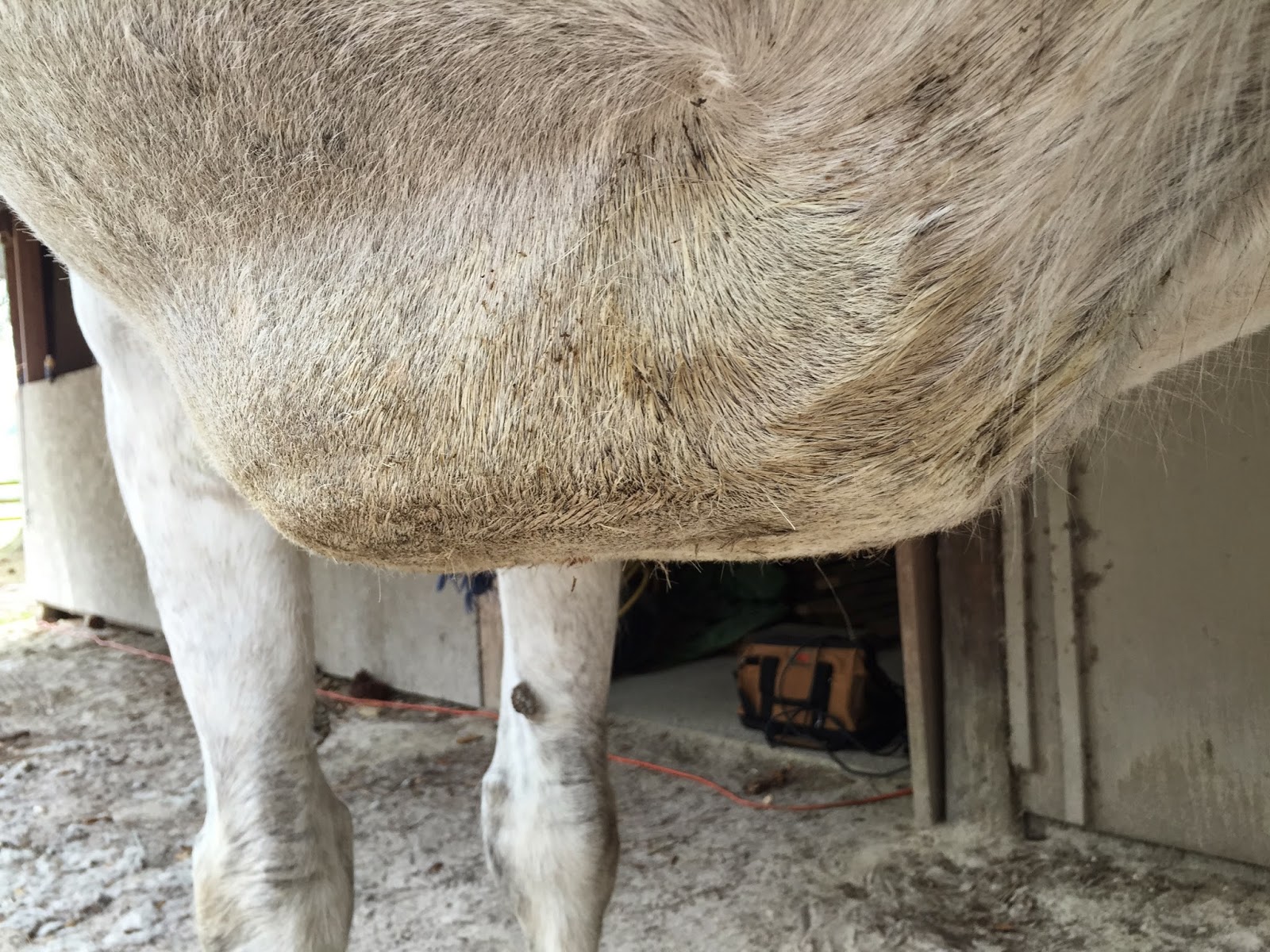 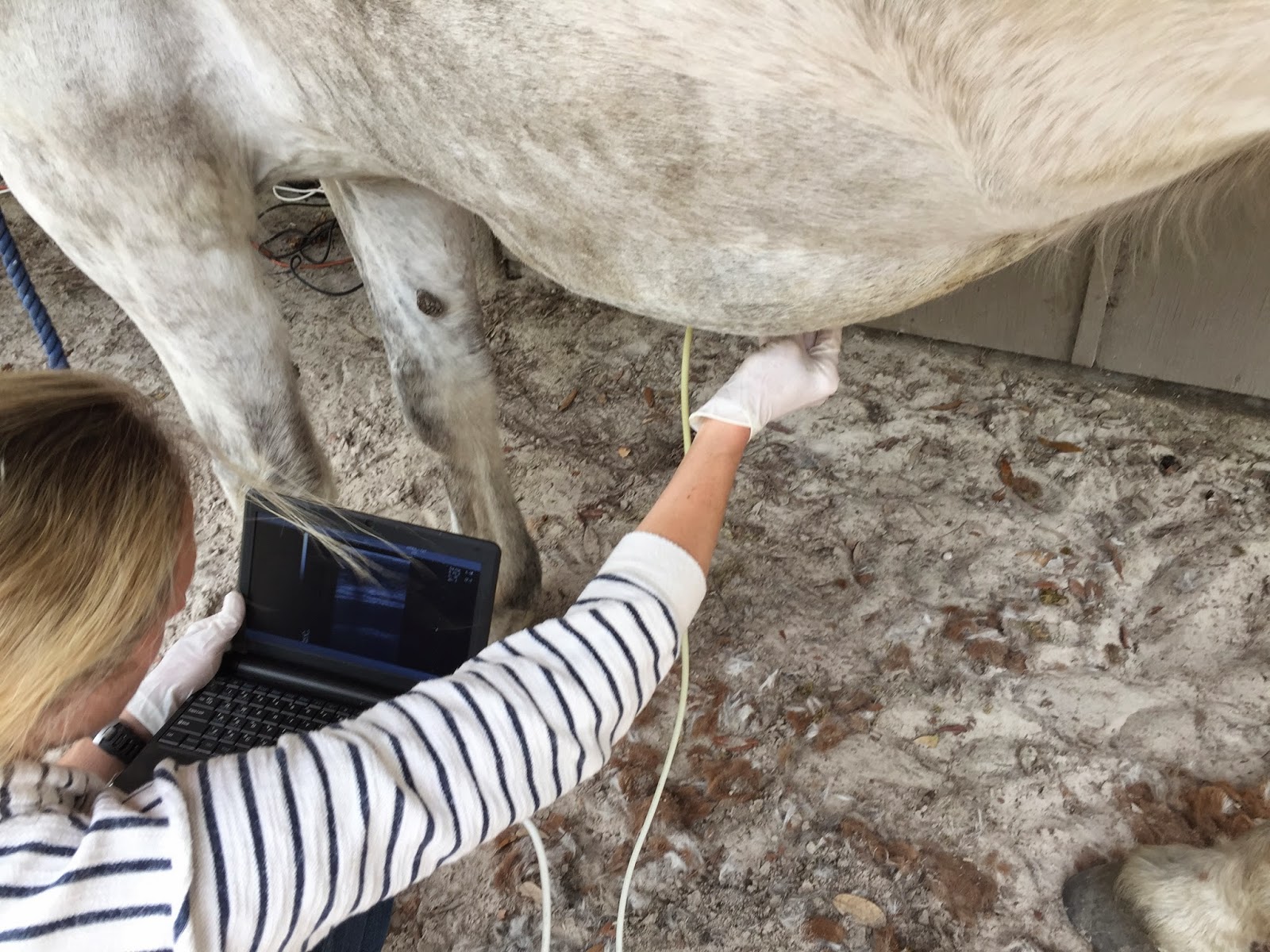 Nothing on the ultrasound.

She gave Klein an injection of Lasix and some strong antibiotic injections that I would give her once a day for the next three days. 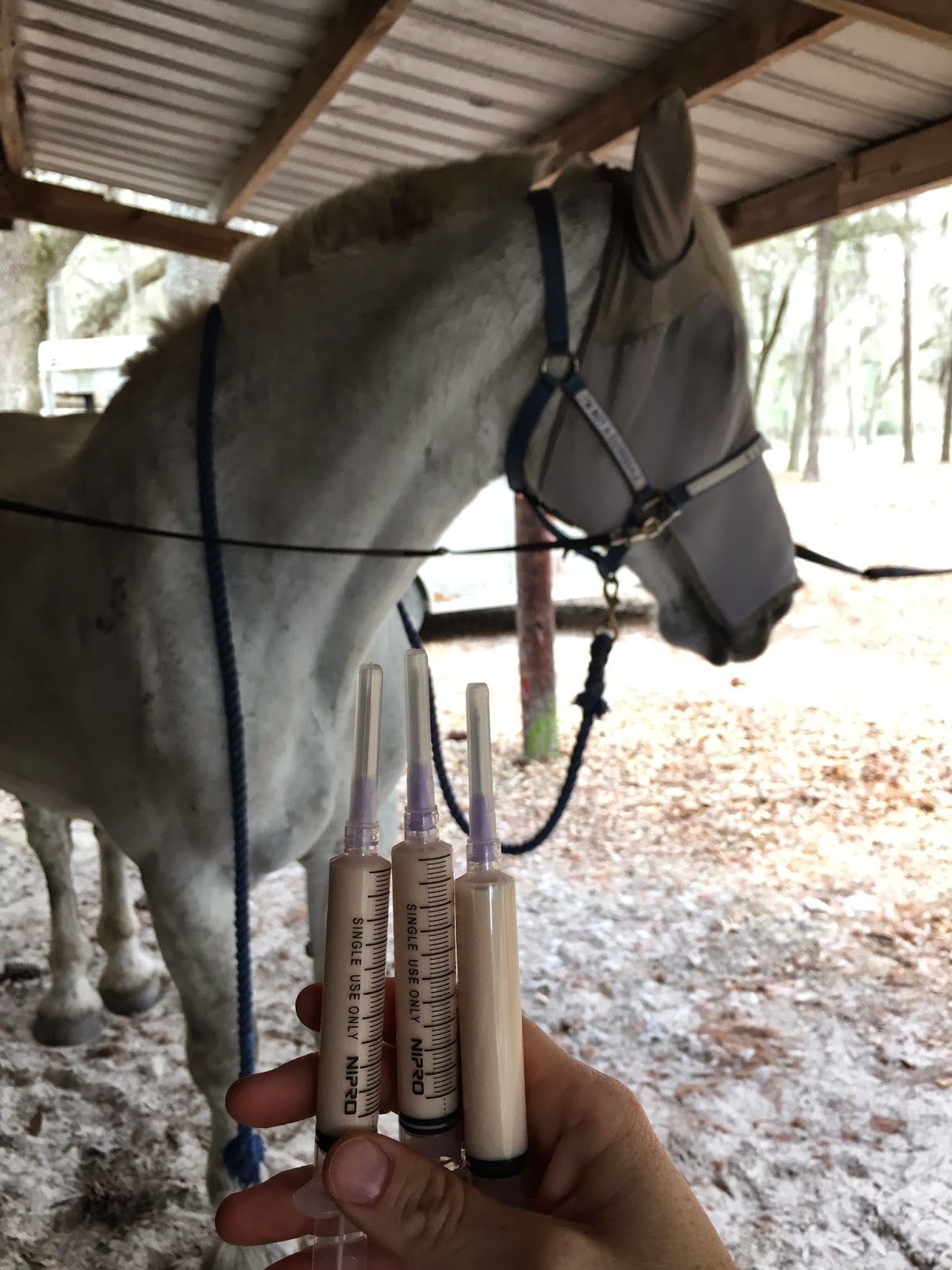 36 hours passed and the THING was STILL growing.  I was seriously worried for my girl.  Wtf was it?  Why??  I texted my vet another pic and said I think she better come back out.  My vet is awesome btw.  I know she is super busy, but I can always text her whenever and she always gets back to us pretty quickly. 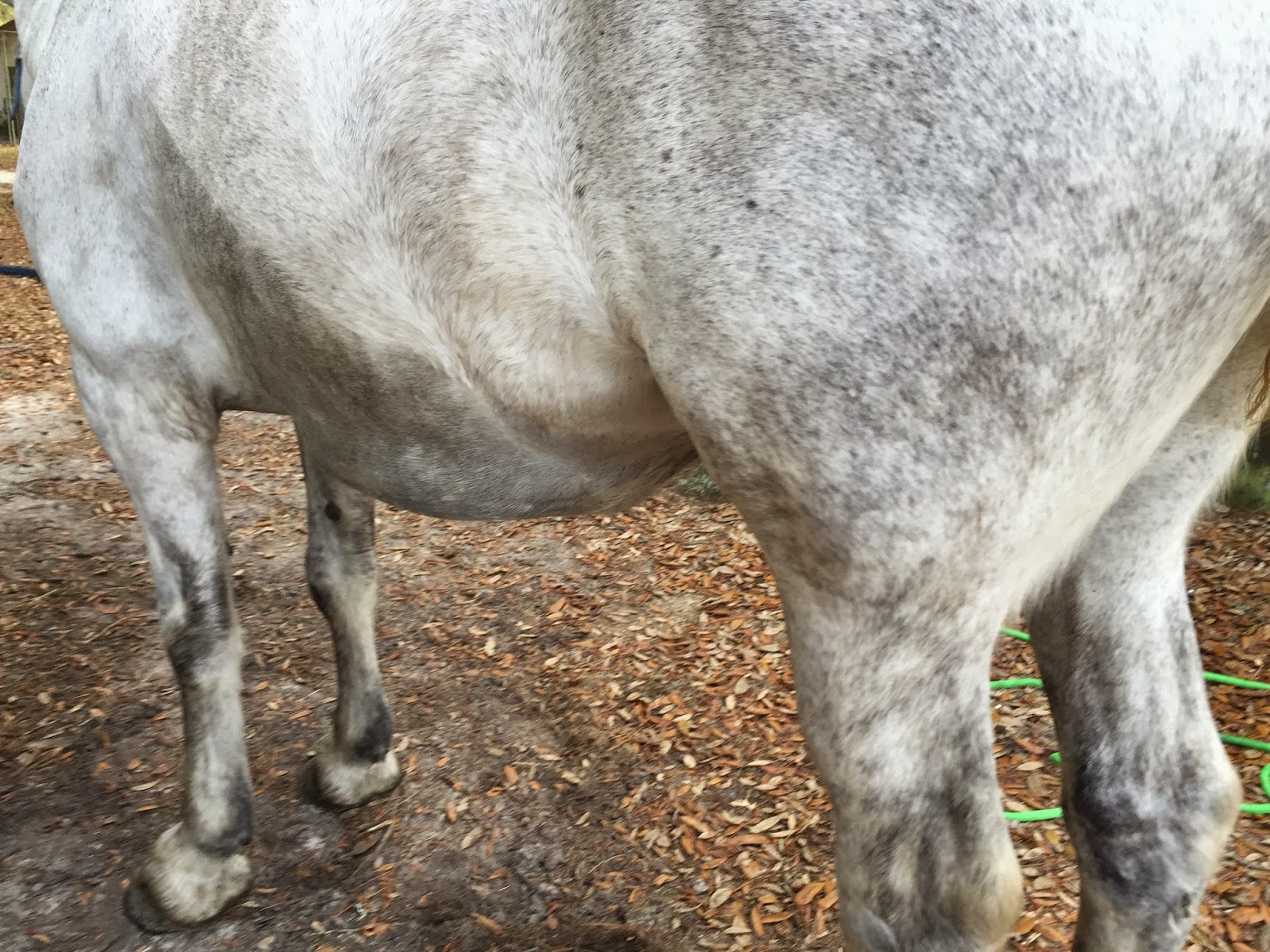 I would not have been super worried if the THING would have just stopped growing.  How big would it get???  What would stop it?  Was anything actually in it? 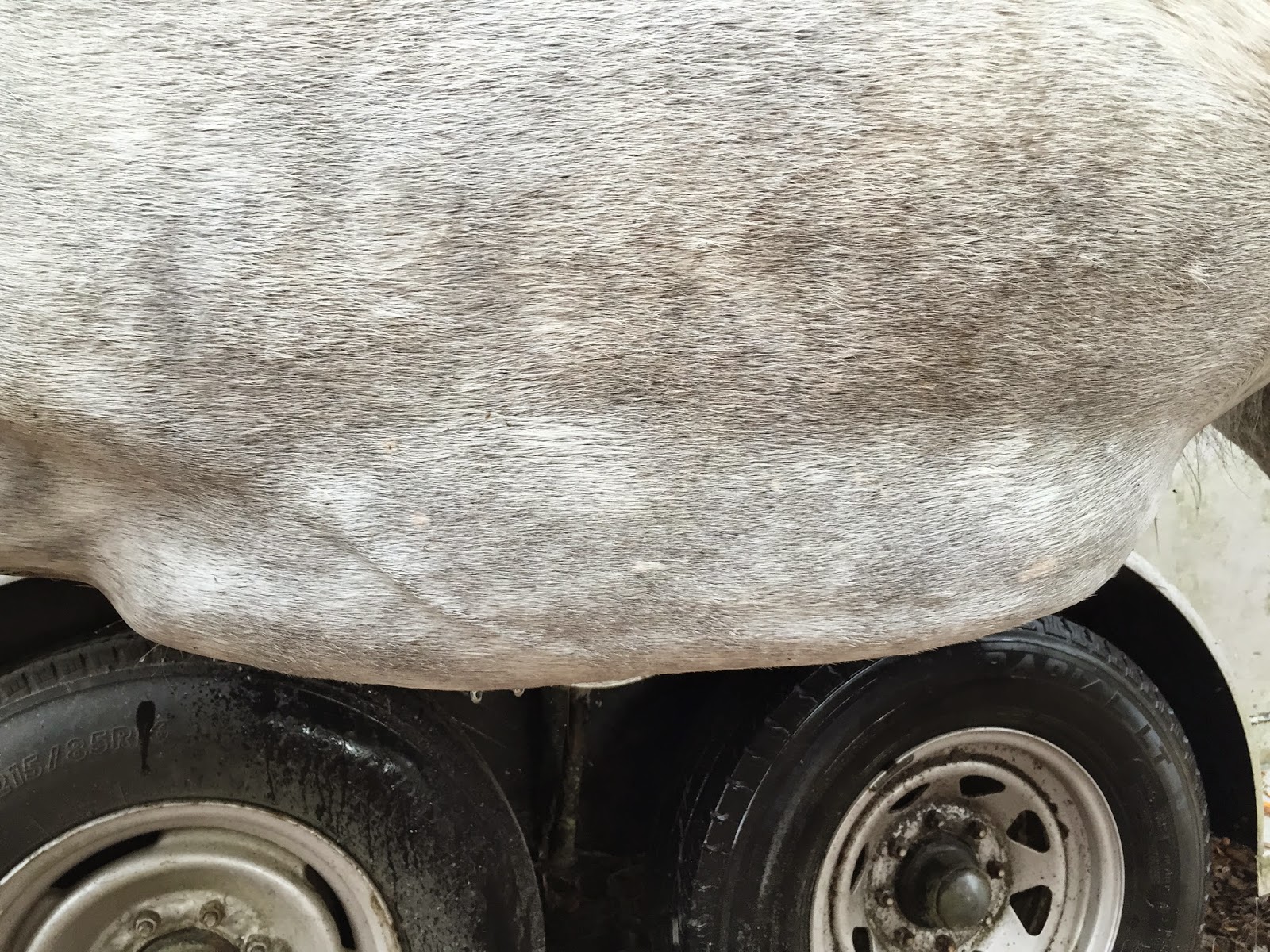 The vet came back out and this time she tried to see if it would drain.  She also cut the bite open a little bit to see if more pus or any other drainage would come out.  Nothing.  She gave me another round of antibiotic injections so that I could double the dose that Klein was on already because this thing was not responding. 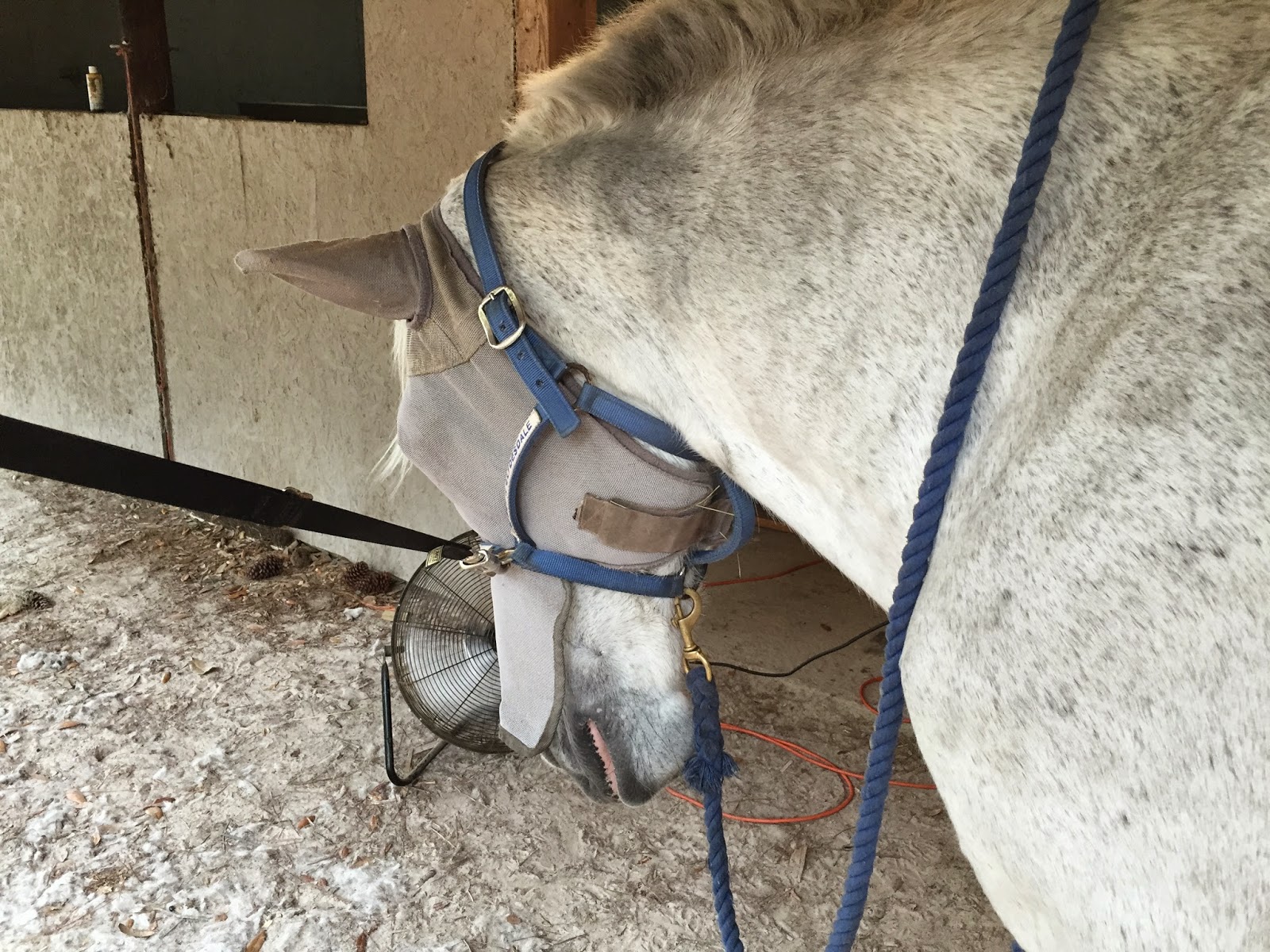 Klein in pony la la land before the drain attempt. 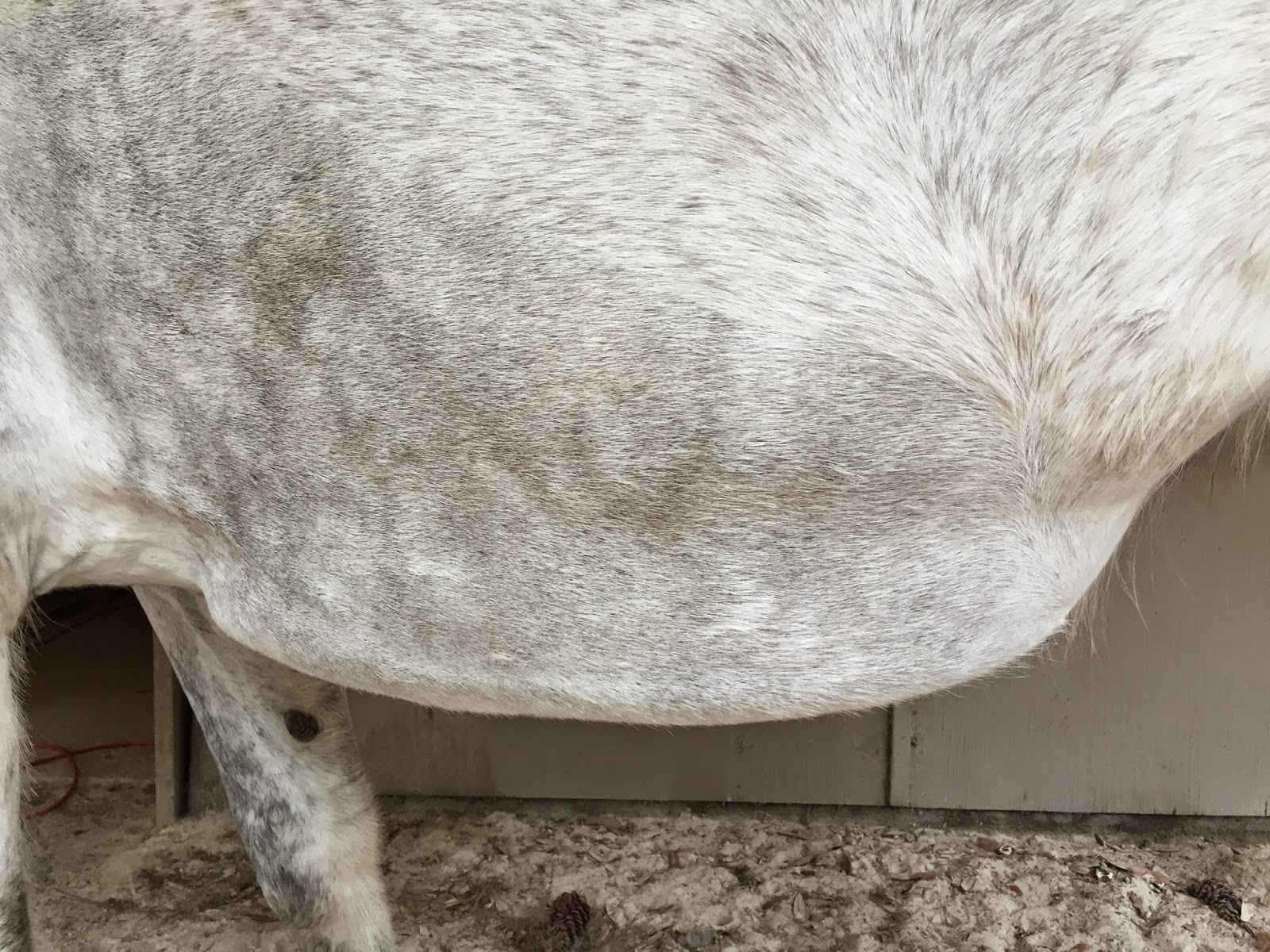 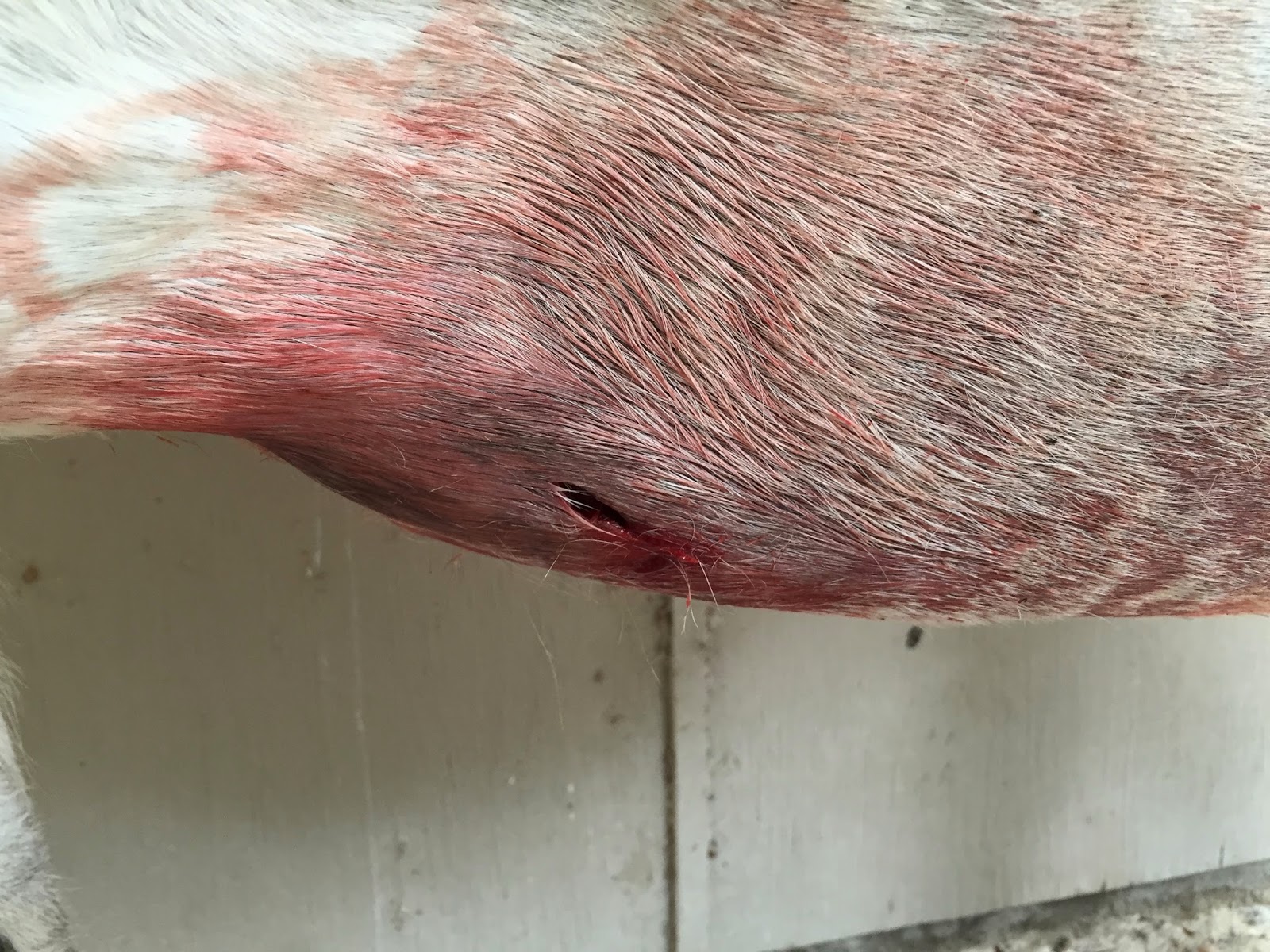 There was some drainage but not a lot to make a huge difference.  We wanted to make sure it wasn't infection in there.

Next step, referral to University of Florida, Gainesville.  Commence freak out.  UF?  Your vet doesn't refer you to UF for fun.  I mean, the UF people were extremely nice and helpful when they called to get my information and Klein's information for an appointment the following Monday morning, but that still did not make me happy to have to visit them.  On one hand I was a little relieved because surely they have everything needed to sort this thing out, but...I was nervous to find out what was going on with my Heart Horse.

Friday night I spent some time on Google looking up equine edema.  A lot of pictures came up that looked exactly like what Klein had going on, ventral edema.  The list of causes ranged from organ failure, to pregnancy, to a simple allergic reaction.  Um, what?  Organ failure?  I had to stop myself right there and remind myself this all started with a bite from something, that much we absolutely knew was true.  Klein also acted like her normal self through this entire situation.  She never had a fever, never went off her feed, never acted like she cared at all about the edema.  This HAD to be nothing more than an allergic reaction.

Klein has had an allergic reaction from a particular round bale, some kind of plant must have accidentally gotten wrapped up in it.  Her legs stocked up and Dexamethasone brought them back to normal by morning.  She also has been given Dex for her summer itchiness when we were in New Mexico.  We ended up finding something different because Dex is not something a horse should be on for an extended period of time or if they travel regularly, which she did.  Thinking about those times I started to wonder what about Dex for this edema?


My vet texted me first thing the next morning to check on Klein and I asked her if we should/could try Dex since it is something she has responded well with previously.  She said we could and to meet her at her office and she would have it ready.  Awesome, another bag of drugs and needles for my girl.  I had been calling her Pin Cushion Pony all week.  At one point I was giving her three injections a day for a few days.  She is such a good sport about everything too.  My vet always says what a good patient she is.

I went straight to the barn with my Dex, excited to get her started on something I know she responds well with.  I was hoping to walk up to her and see that the edema had gone down but, to me, it looked like it had not.  The Other Half had this awesome idea to draw lines on it with a Sharpie so we could have a solid gauge to monitor.  I told him where the lines had moved and that I thought it was getting bigger.  I sent him a picture and he told me I had it backward and that where the lines had moved it actually went down a tiny bit.  I wasn’t convinced yet.  Later that evening he even gave me a demonstration with a plastic container to try to explain it to me again. 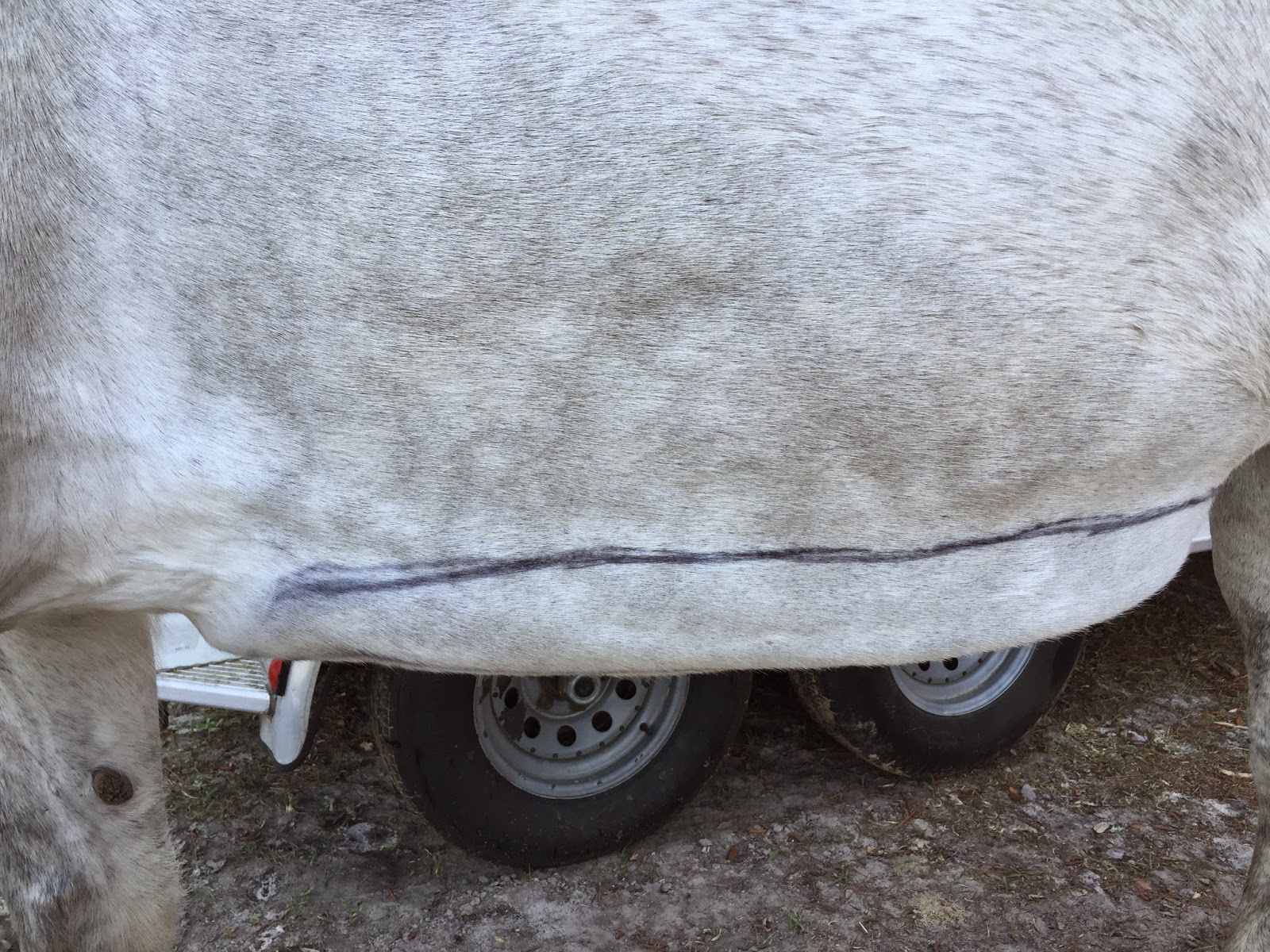 Our Sharpie gauge.  Now that I look at this picture, the Other Half was right, it was clearly down this day.  This was the day I wasn't sure. I wanted to make sure she really was getting better and I wasn't just seeing what I wanted to see.

That evening I put Klein on the lunge line to trot for ten minutes in an effort to help start the swelling on its way to reabsorbing.  She hopped around, squealed, and broke into this big moving trot like her normal self.  She seriously still had no idea at this point that she had any ailment.  She probably couldn’t figure out why she hadn’t worked all week.  This comforted me a little more to see her completely oblivious, the edema had to be completely superficial.

We had been cold hosing the edema too and Saturday evening the Other Half made Klein a custom Spider-Man ice pack.  We had decided to wage an all out war against the edema.  Dex, lungeing, ice pack, etc... 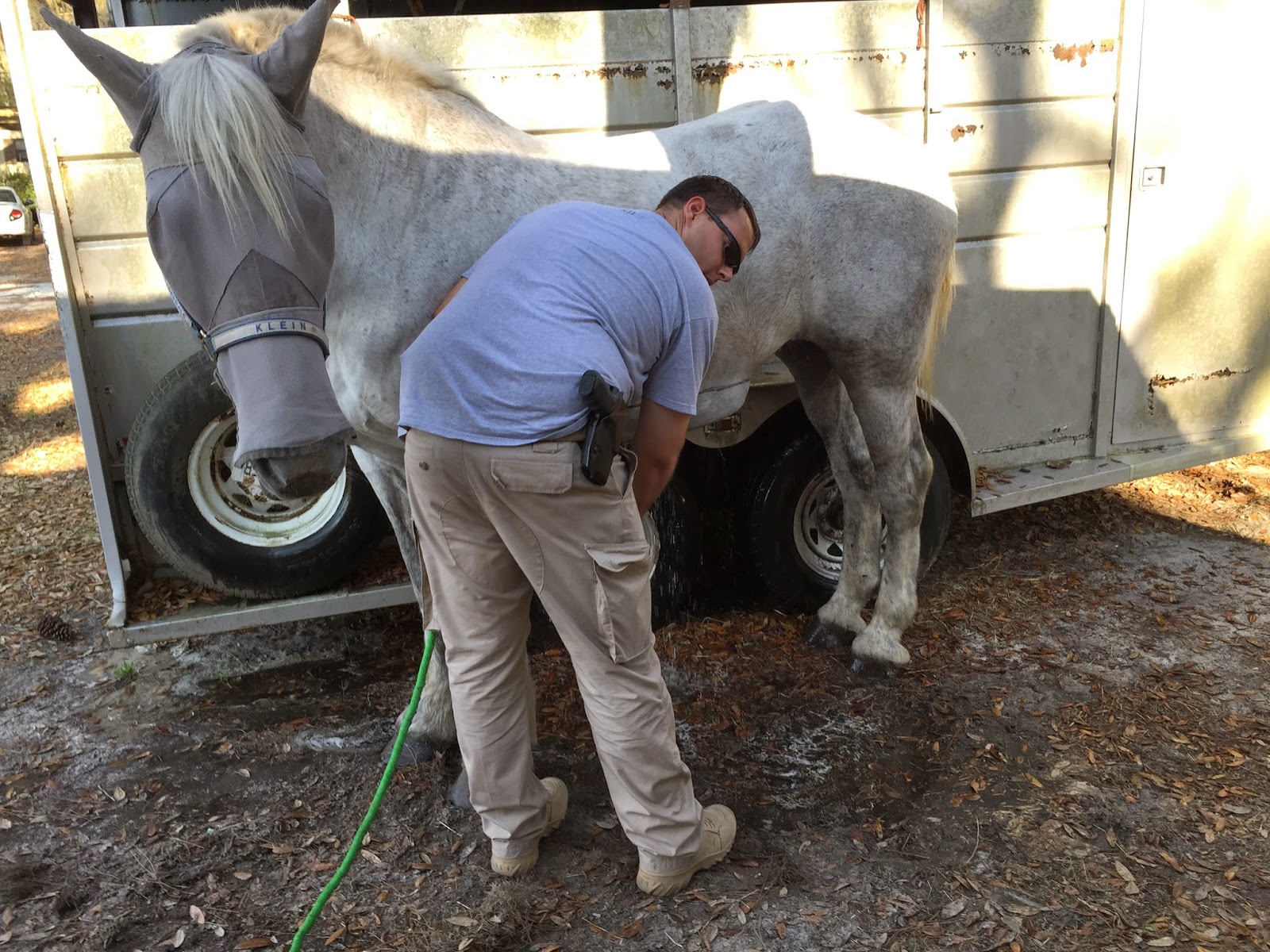 Straight from work to the barn to tend to the princess.  That's not my trailer either btw. 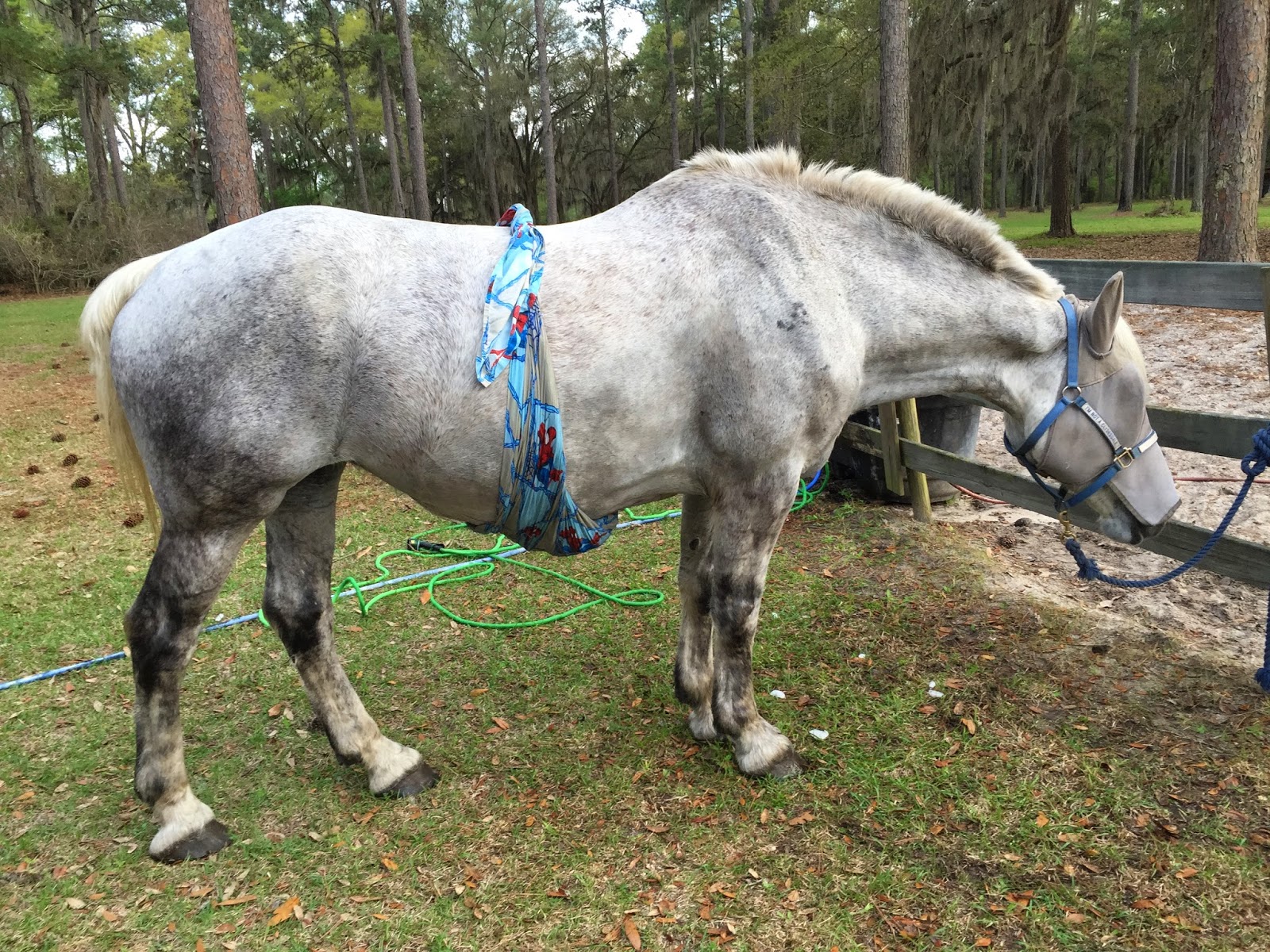 Spider-Man ice pack.  She seemed to really enjoy it oddly enough.  She stood there like this with her head dropped, relaxing, the whole time it was on.

Sunday morning I went to check on my girl and FINALLY I could notice a difference, it was definitely going DOWN!  Yes, I did start crying, and hugged Klein tight.  Klein – 1, Ventral Edema – 0.  Sunday we also finished the last of the antibiotics. 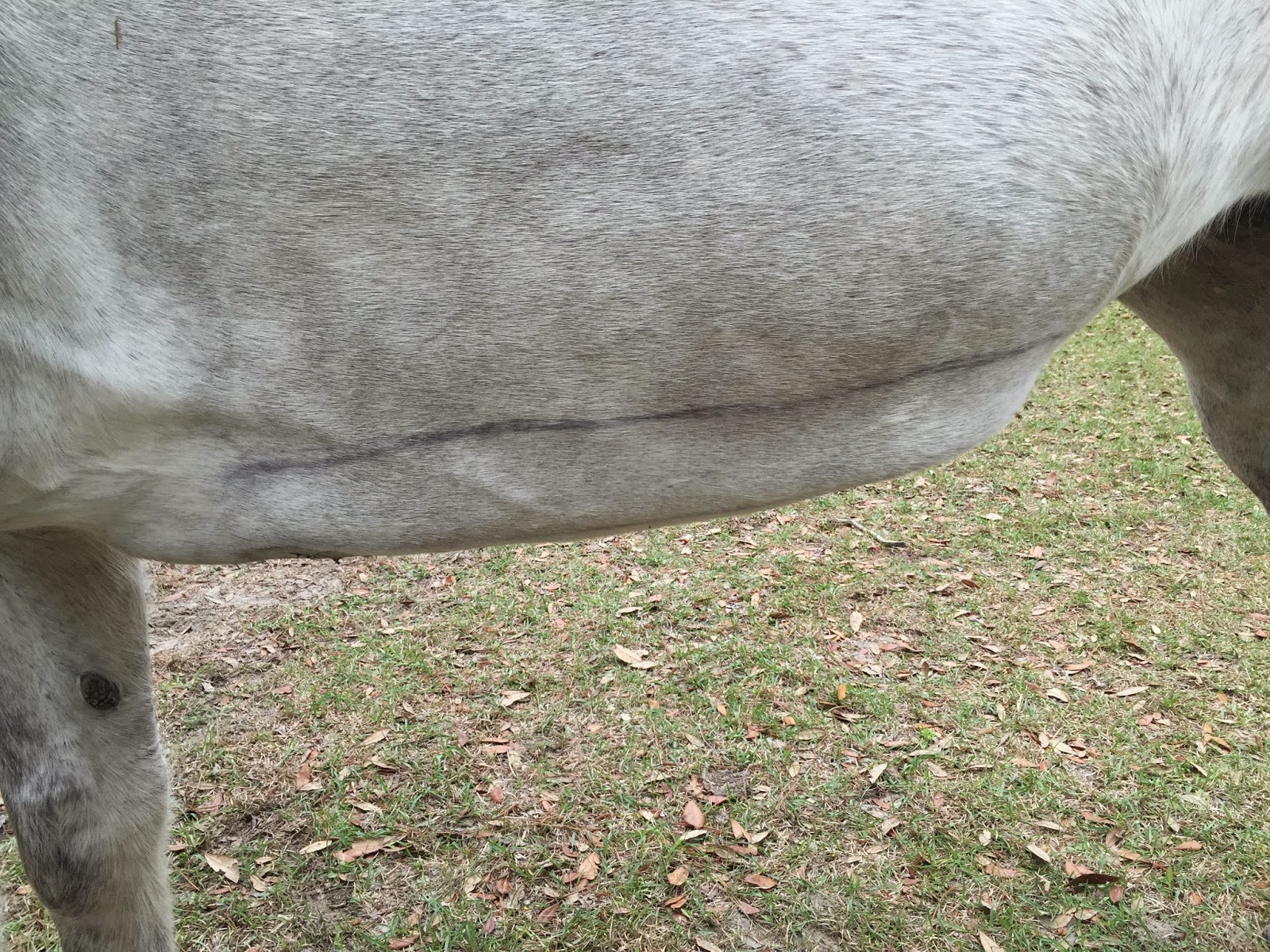 This is the day I accepted that it really was getting smaller.

I called UF the minute they opened Monday morning to cancel our 9am appointment.  With Klein being completely unaffected in any other way by the edema and it going down noticeably, my vet agreed there was no need to take her to UF. 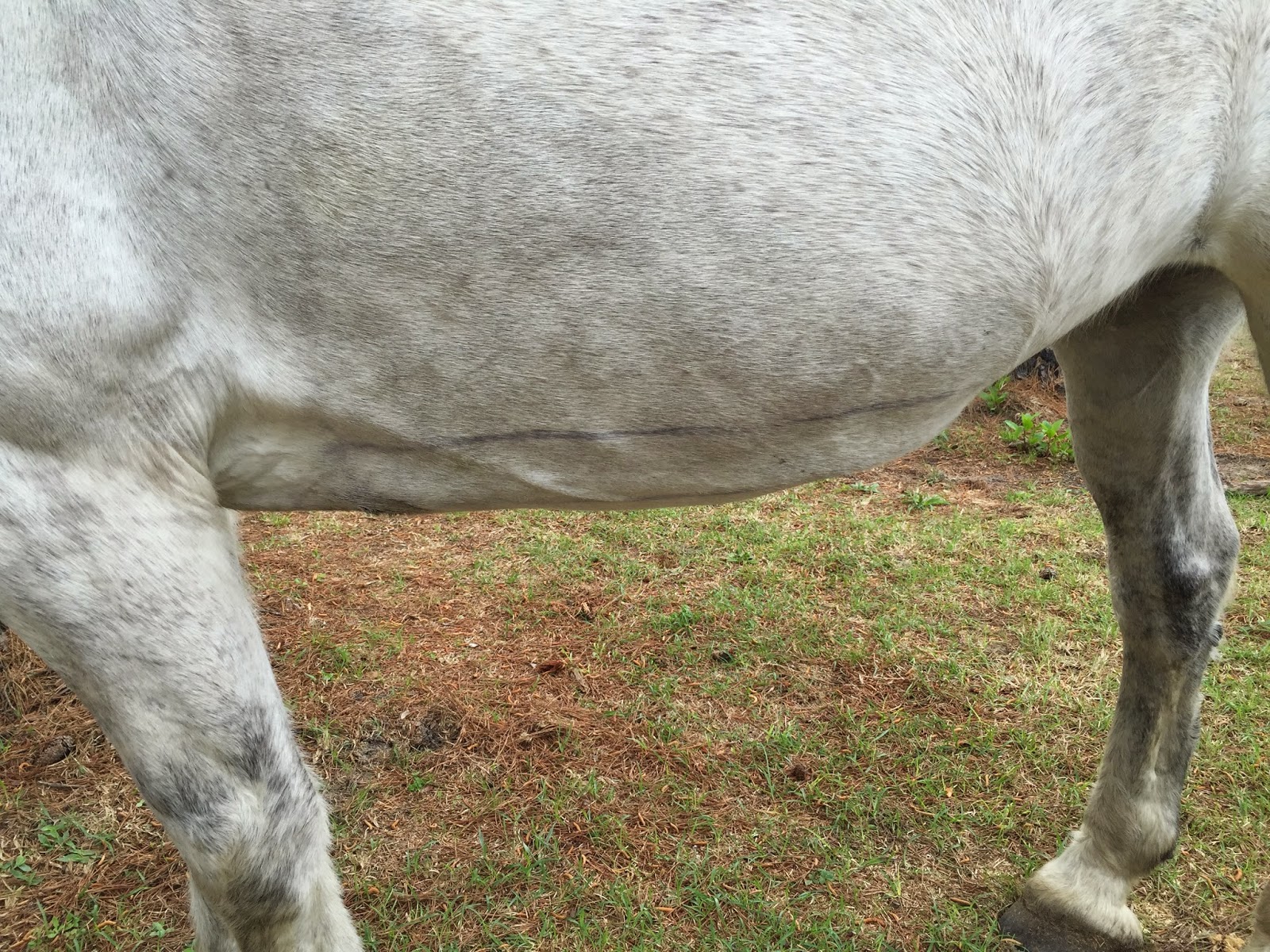 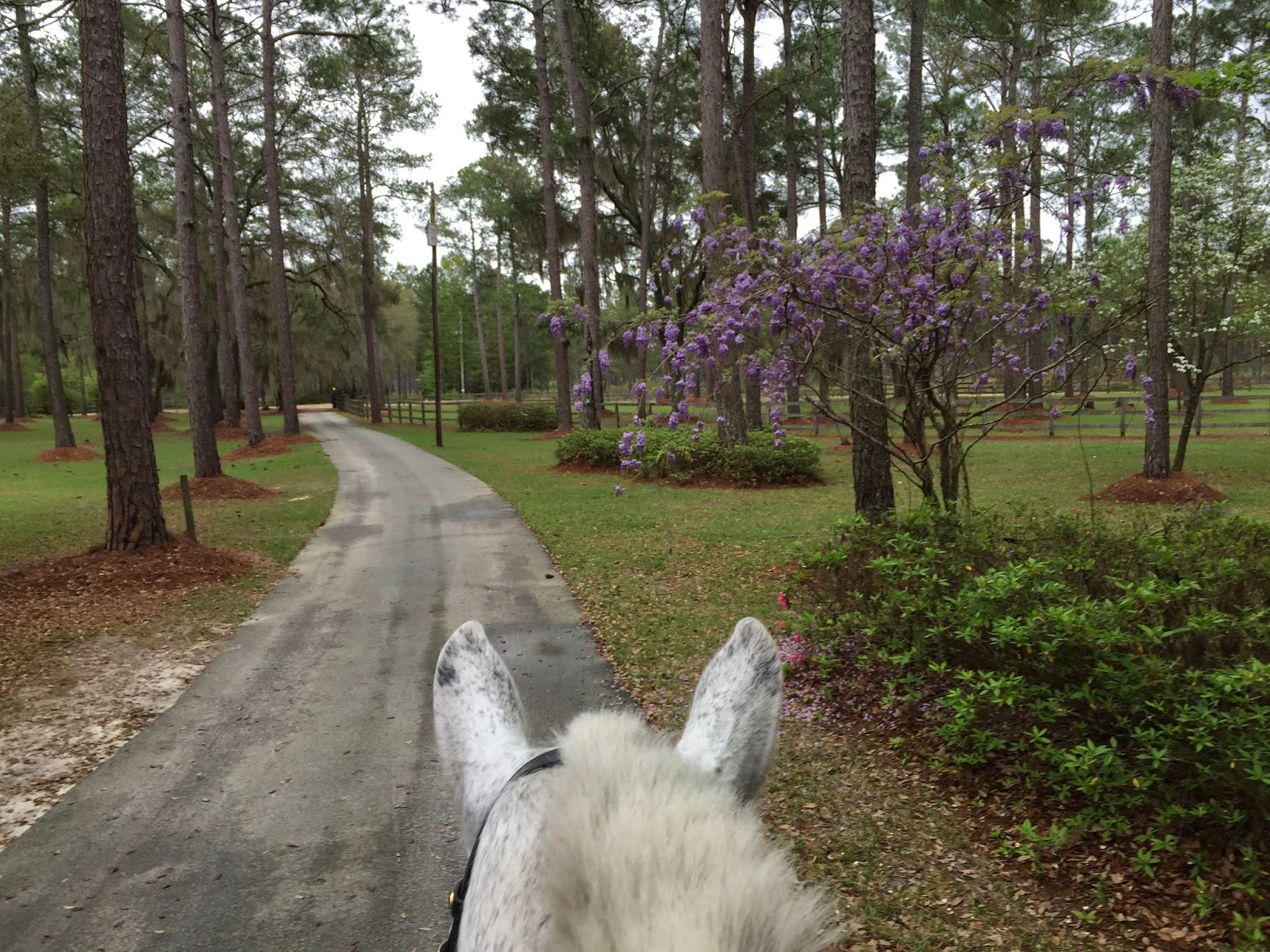 Today the edema is completely gone.  She still has her three absorbable stitches from where the attempt to drain it was.  She couldn’t care less about those either.  She lets me clean them and clip around them and do whatever I need to.  If they aren’t gone by Monday then I am going to pull them out. 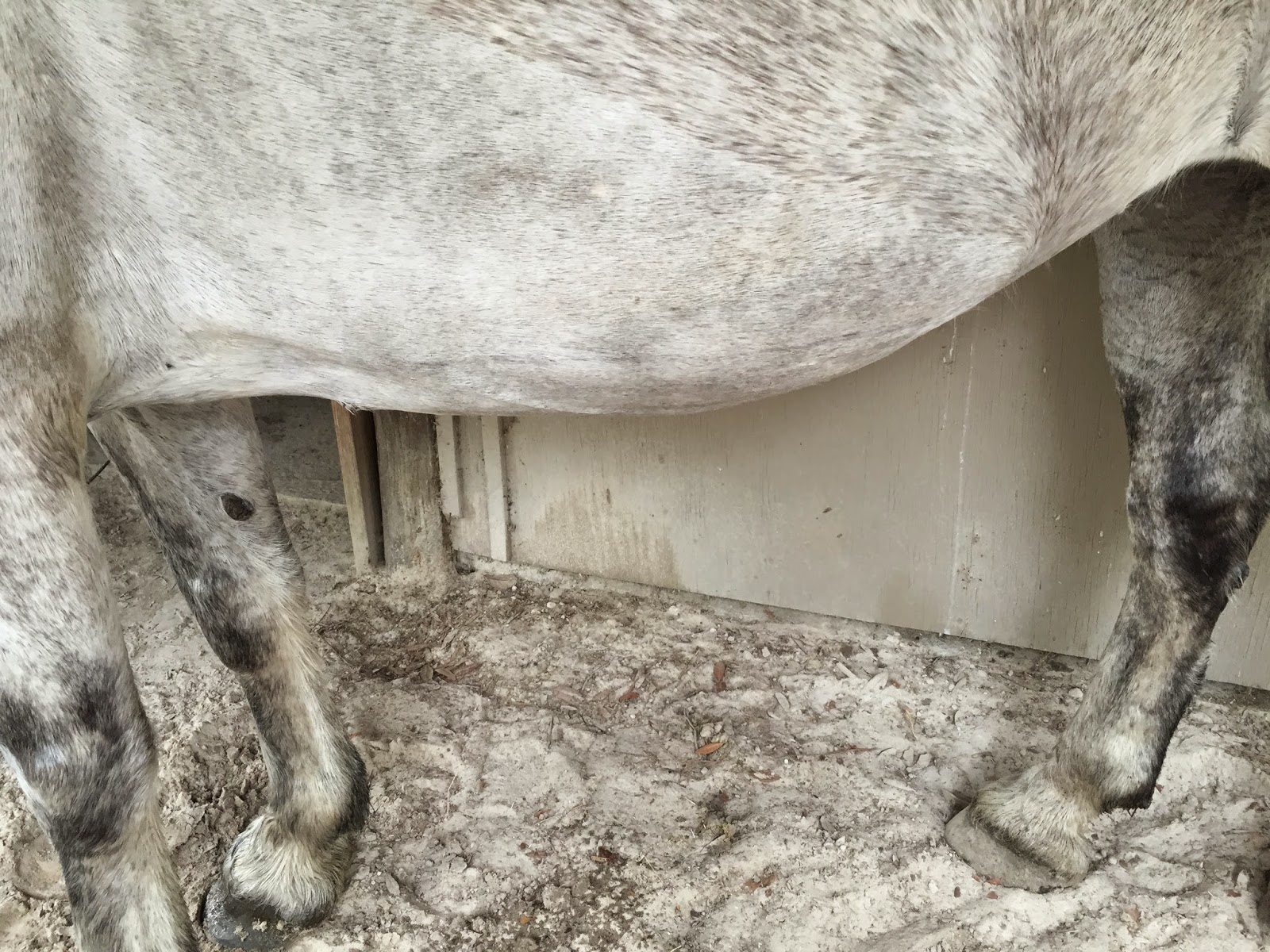 If you look close you can see how high up the Sharpie line is now!  Crazy it was swollen to such an extreme size.

Next week she will be back to regular work.  She also has an appointment with the saddle fitter tomorrow, so perfect timing for the edema to be completely gone.  I can definitely tack her up tomorrow with no worries.  The three stitches are behind her girth area too.  If there was any trace of the edema I wouldn’t put tack on her, but it is definitely gone. 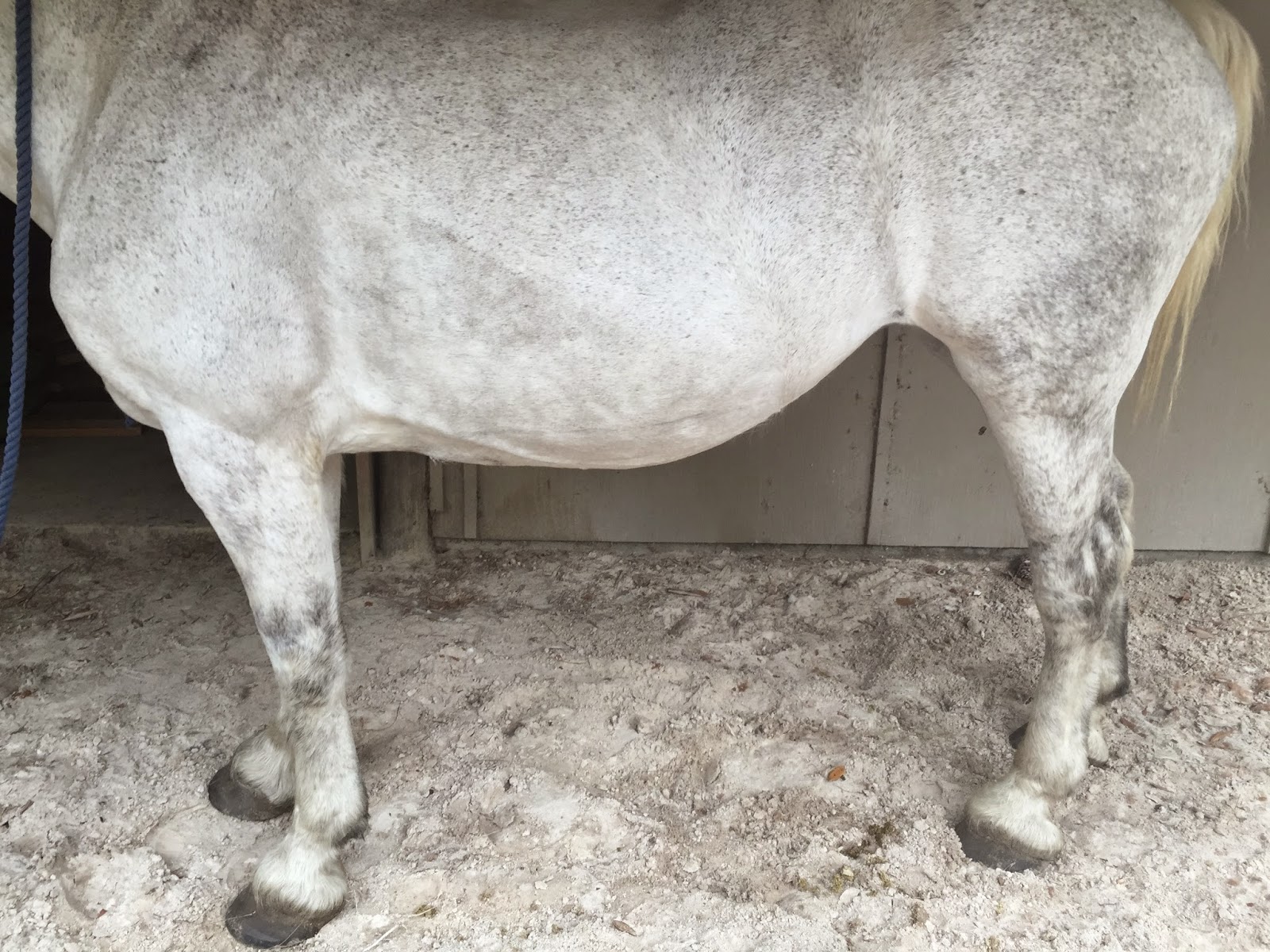 What a weird, stressful week.
Posted by The Jumping Percheron at 9:47 AM