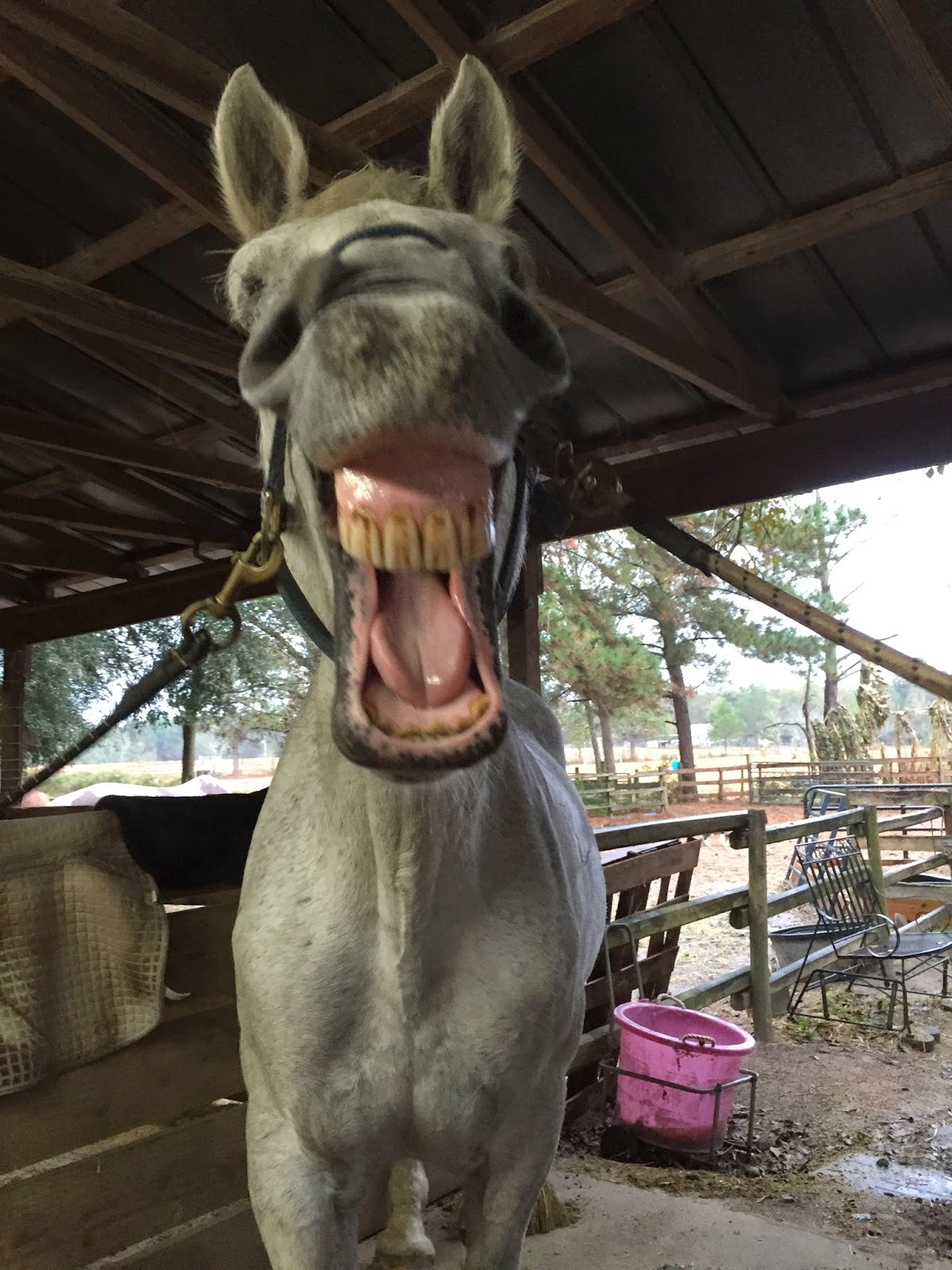 
Klein and Wes each had a massage and chiro adjustment last Wednesday.  Mochs is good for now, and she isn't doing much.  Wes we are still trying to straighten out and plus, he's an old man that's worked his entire life.  Time to relax.  Klein of course because she is working right now and it showed in her massage.

Wes was first.  At first he wasn't sure what was going on but after about five minutes he realized exactly what was going on and stood like a statue.  He LOVES massages and adjustments.  I didn't think it was possible for him to get any softer of an eye but he managed to while he was being worked on. 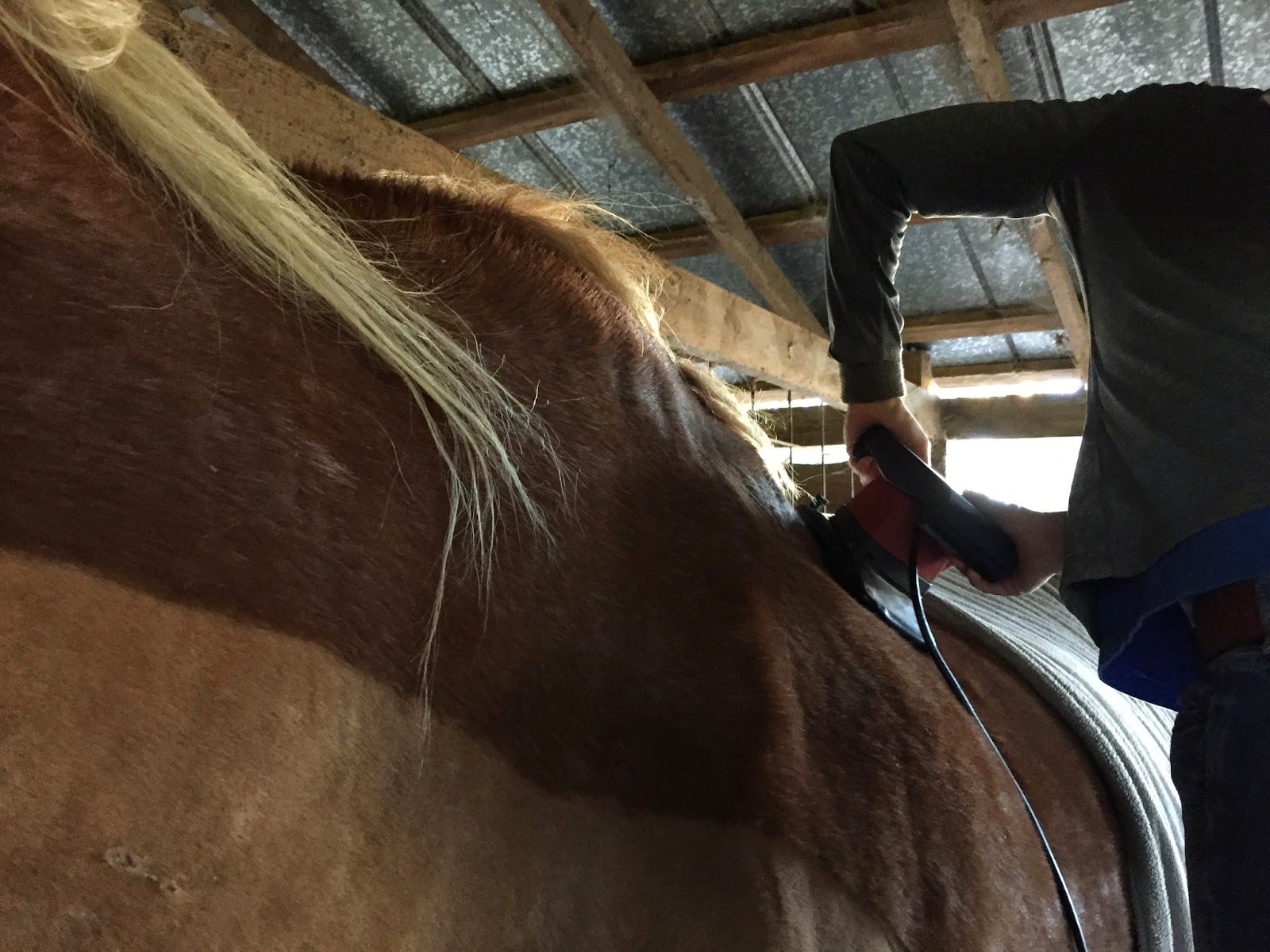 Massage time, and yes she is standing on a step stool in this picture!

Klein always loves her massages and adjustments as well but she had some tension going on this time so she was a little uncomfortable a couple times.  The increased dressage work showed.  She had some tension over her top line, which is not usually the case.  It will eventually go away more and more as she gets stronger and builds a little more muscle to carry herself better.

I just always imagine she must feel at least slightly like I do after I get owned by a WOD at CrossFit.  I have been crossfitting for over two years but damn, there are some days where I feel like I got run over by a dump truck and then it backed over me I am so sore.  Or like today is another example, my quads are so sore from pistols this morning, I feel like I front squatted my car.  Some weeks I'm fine and others I'll add volume or focus on a movement I'm weak at and until I build up the additional strength, it kind of sucks some days.  If Klein felt like that though, I'm sure she'd let me know, or I would pick up on it in some form or fashion.  I can tell just by an expression on her face right before her summer itchiness comes on.  I know this girl like that. 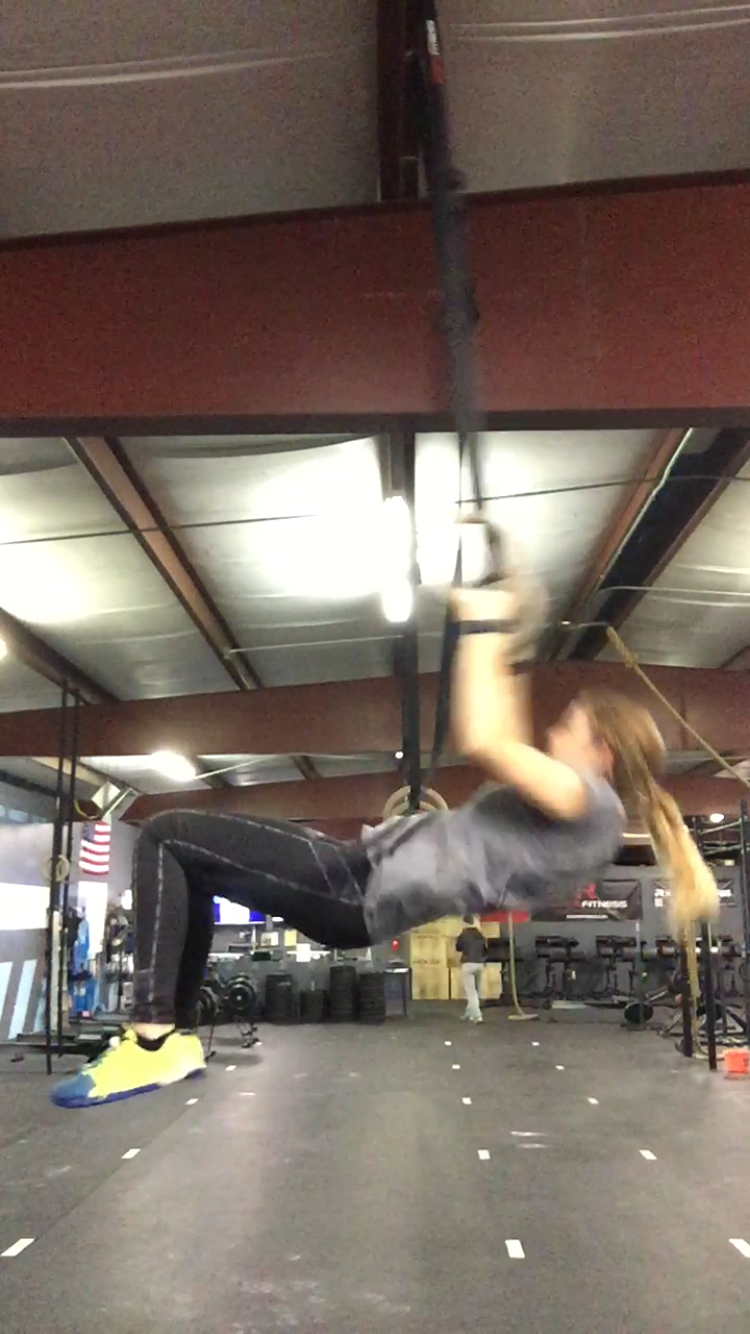 See, working on chest to ring pull-ups here.  Last week I focused skill work on pull-up variations and ring dips and by the end of the week it felt like my arms were about to fall off.

Klein has never acted like she was sore or stiff.  She never is resistant or hesitant to do anything I ask (or while being tacked up, groomed, etc), never hints toward any discomfort, but I still just assume it has to be there on some level after some concentrated work.  She stretches and warms up in the same manner I warm myself up, I also use liniment on her on a regular basis.  She is my equal, she is not some piece of recreational equipment. 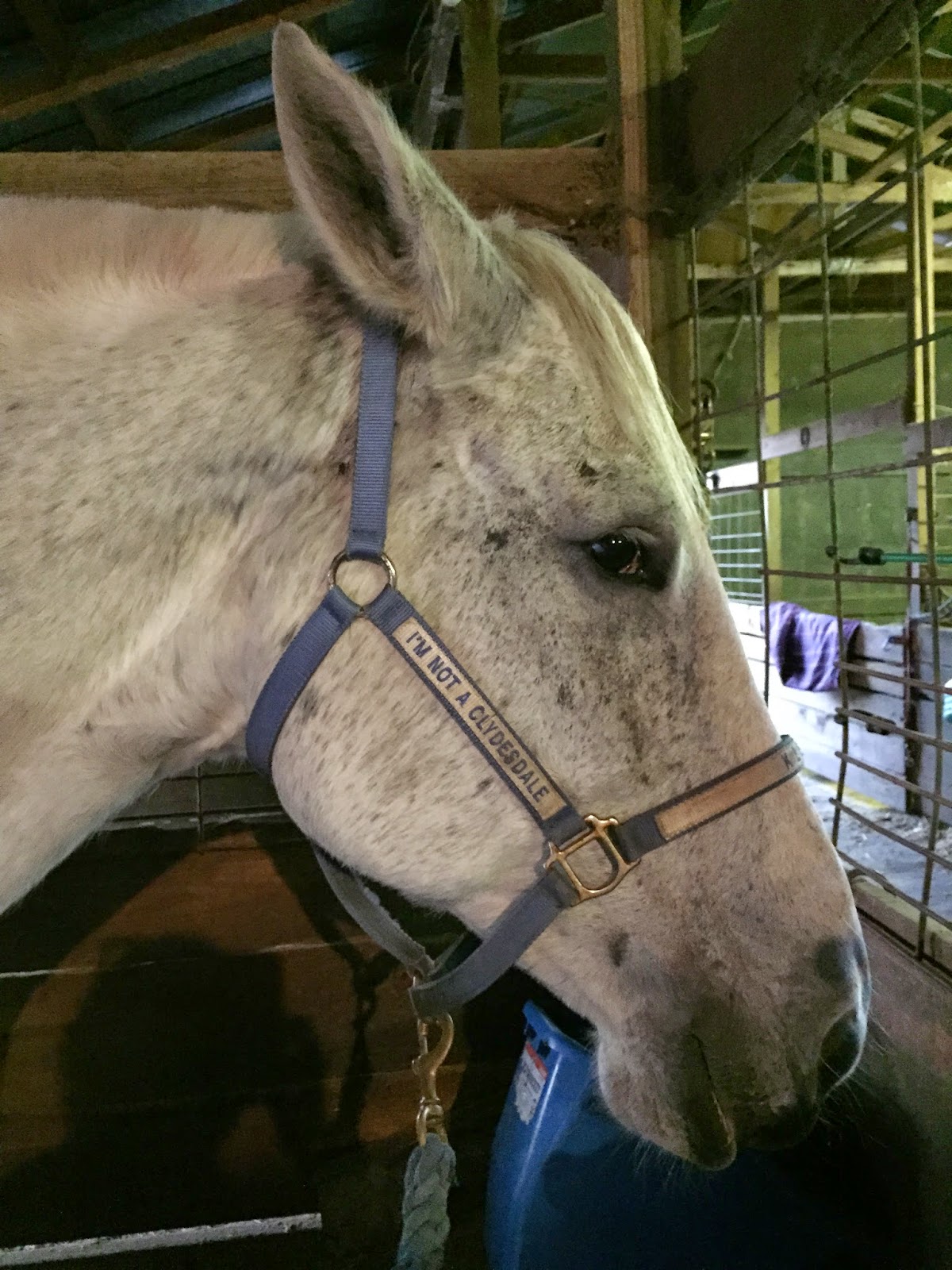 Not amused.  I forgot to take a pic near the end of her appointment, her entire demeanor had changed and she was putty.

We did get some dressage work in despite having so much rain last week.  It rained for about four days straight.  We rode in the rain a couple times, but it was in the 70's and breezy so it wasn't a cold rain. 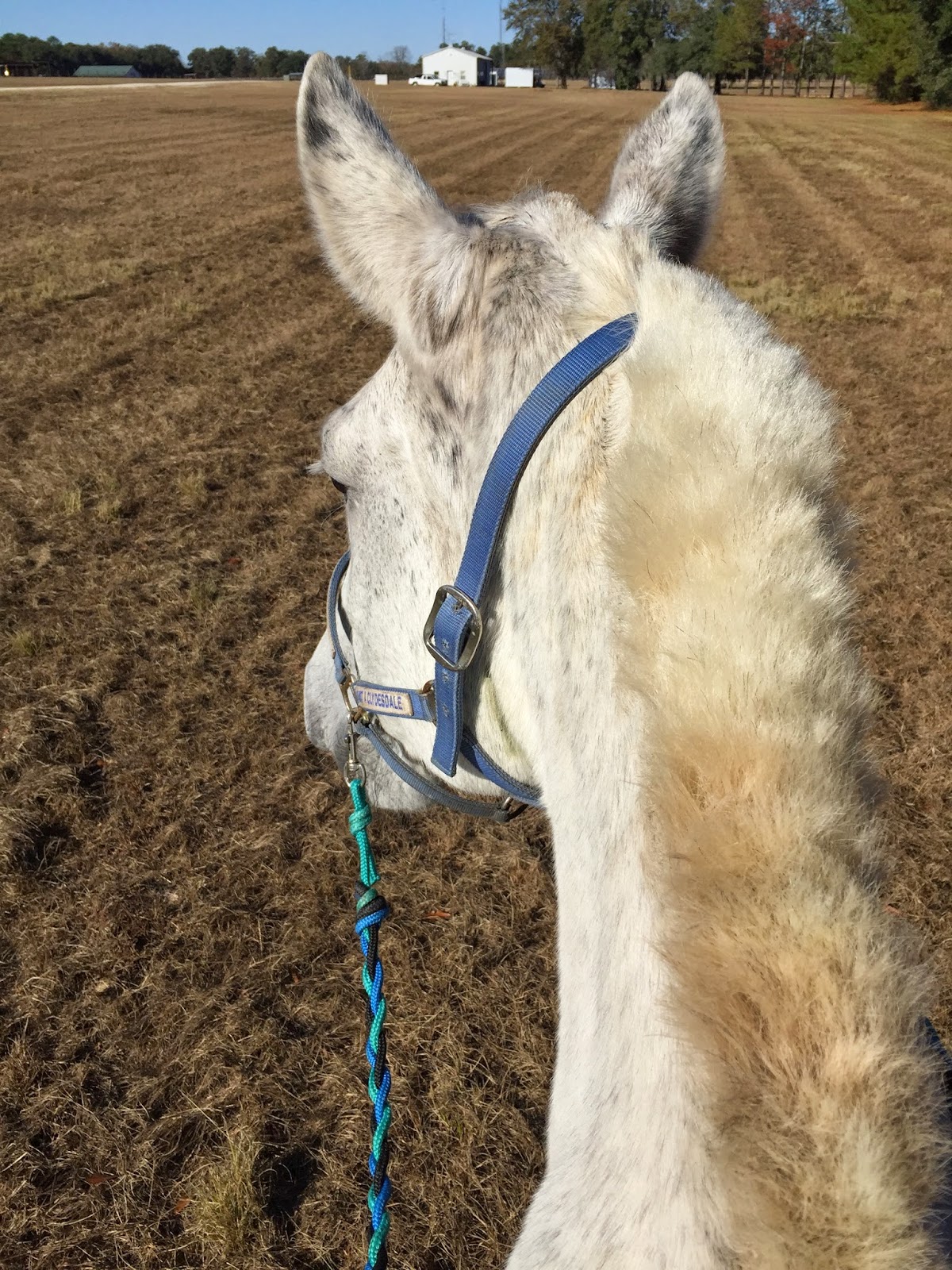 We were just out messing around the first day we saw the sun and took a couple of videos to show Klein's complete disregard for tarps.  Not a whole lot catches her attention.

And another tarp laying around:


We also had to clip some "vents" in Wes' hindquarters because he was still getting a little sweaty during the day.  It's still in the 70's here during the day and 50's at night.  Next week it will get into the 40's at night and I'm sure Wes cannot wait.  I'm hesitant to clip more off of him in case the temps drop off.  We have a mild winter here.  The lows get into the high 30's at night.  So I don't want to take off much more hair and then have the nights drop into the high 30's.  I still doubt he'd be cold.  He hasn't worn a blanket in the 10 years I have known him to live in Utah and we are not starting here in the mild South Georgia "winter." 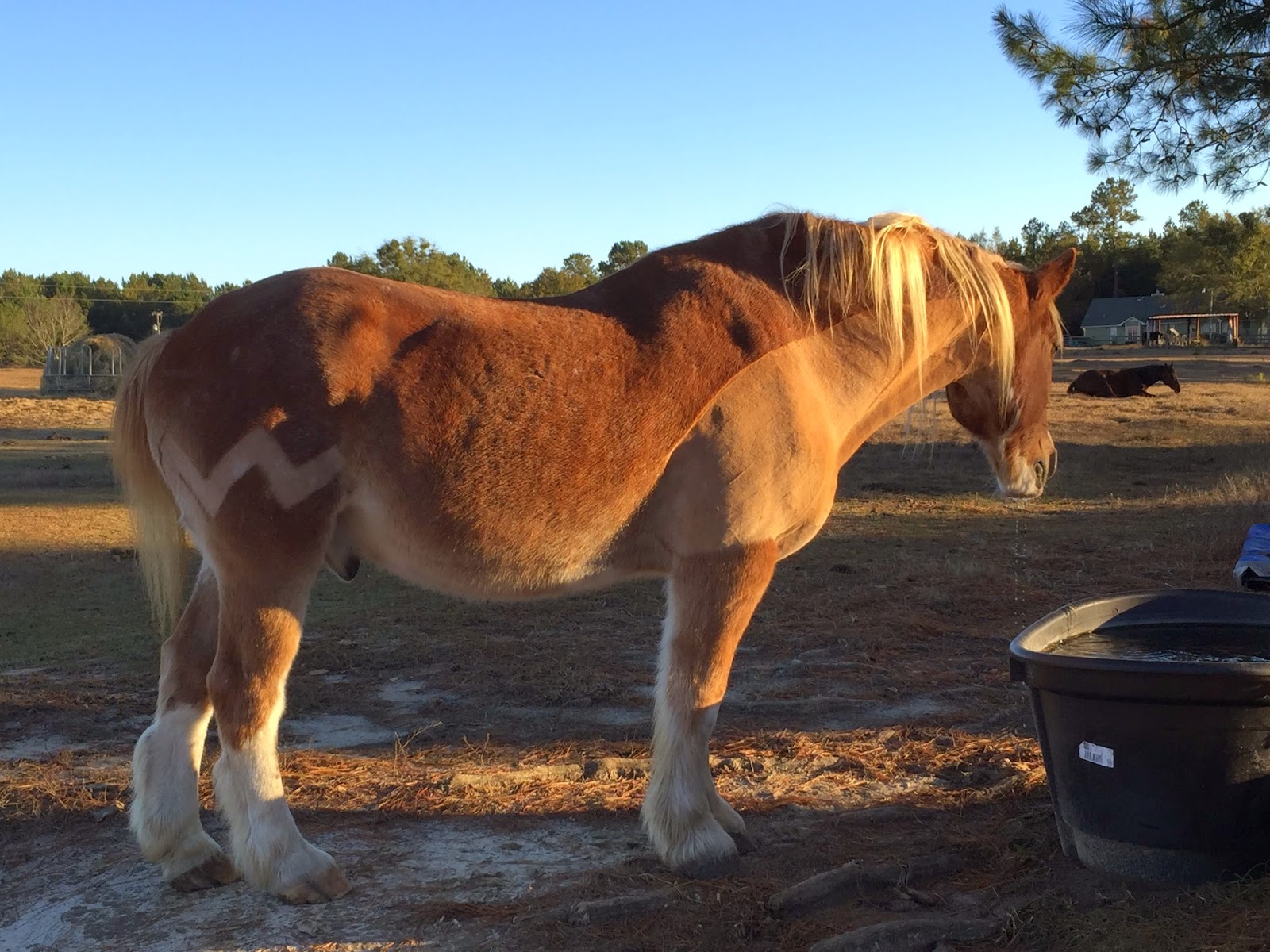 The Other Half hooked him up with some zig zags on his hindquarters. 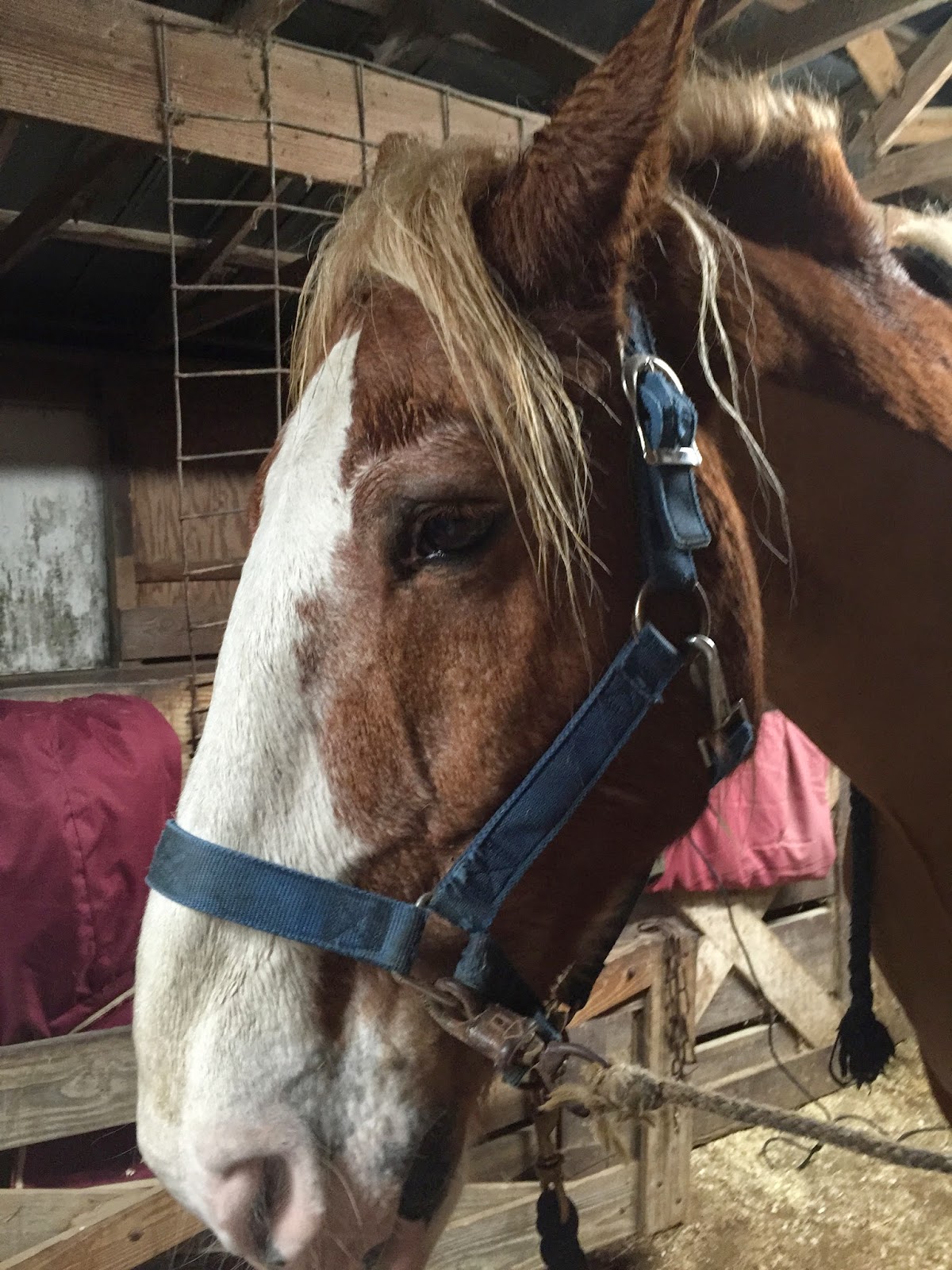 Sweetest sad puppy face I have ever seen on a horse...ever.  This is his default expression.  He is the sweetest guy. 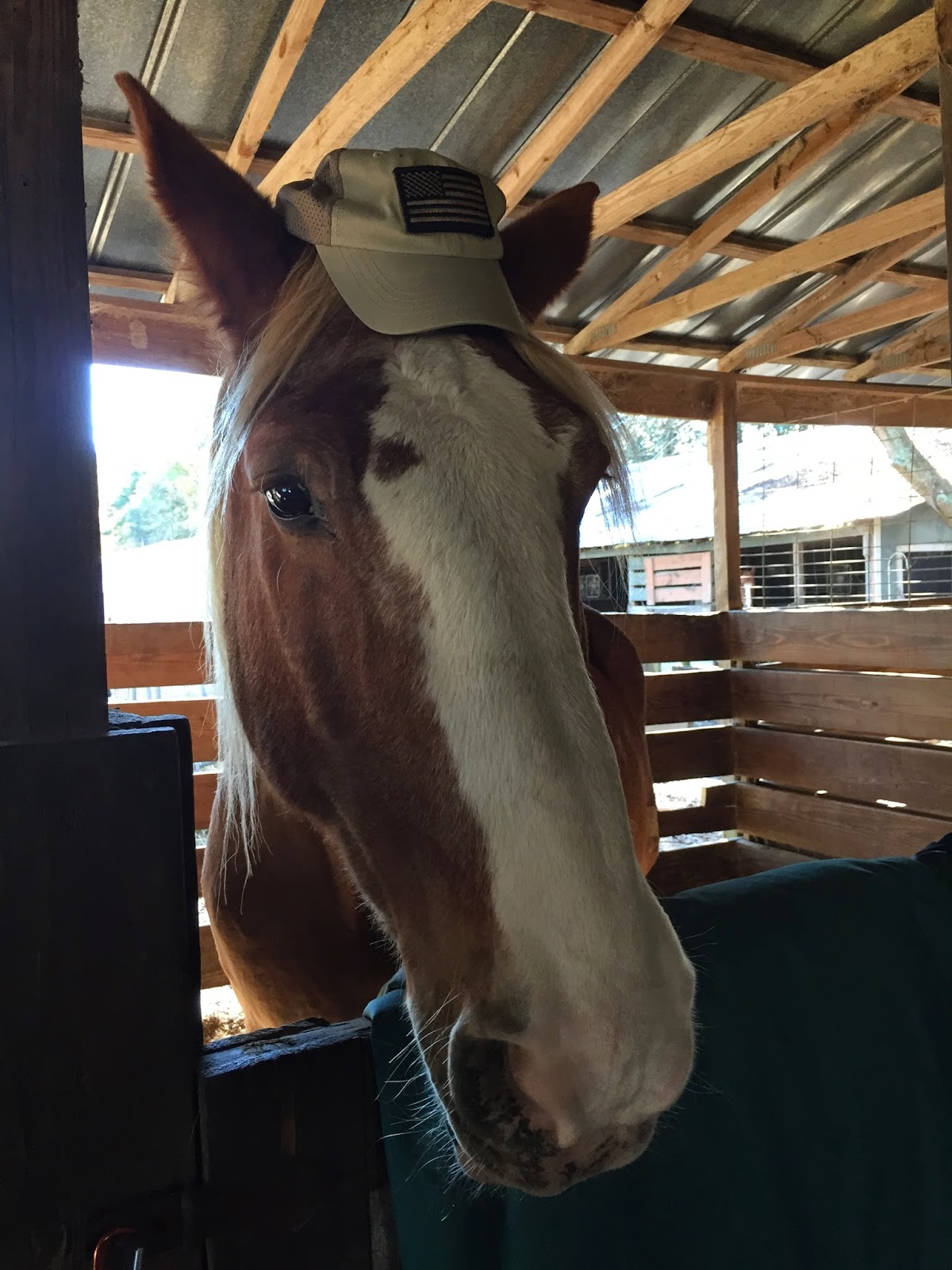 Never can have too many pictures of The Handsome!

Mochi is still just being a fat pet.  Seriously, she is a Fatty McButterPony right now. 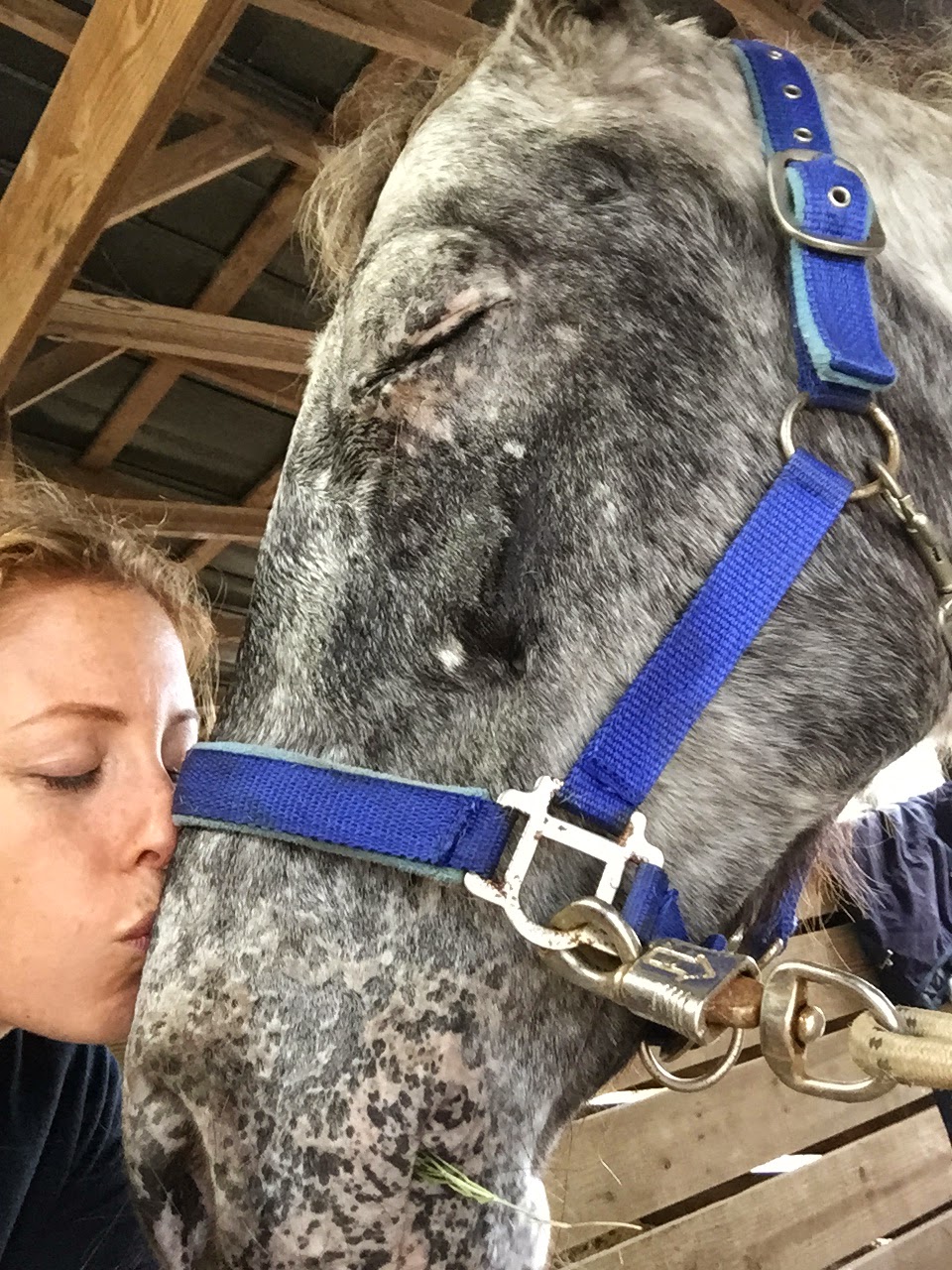 For those of you that drink wine, the Other Half surprised me with this the other night.  I have never tried this kind and it was great, so if you see it, grab a bottle!  It's 13% and has a horse head on the label, there is no way it can be bad! 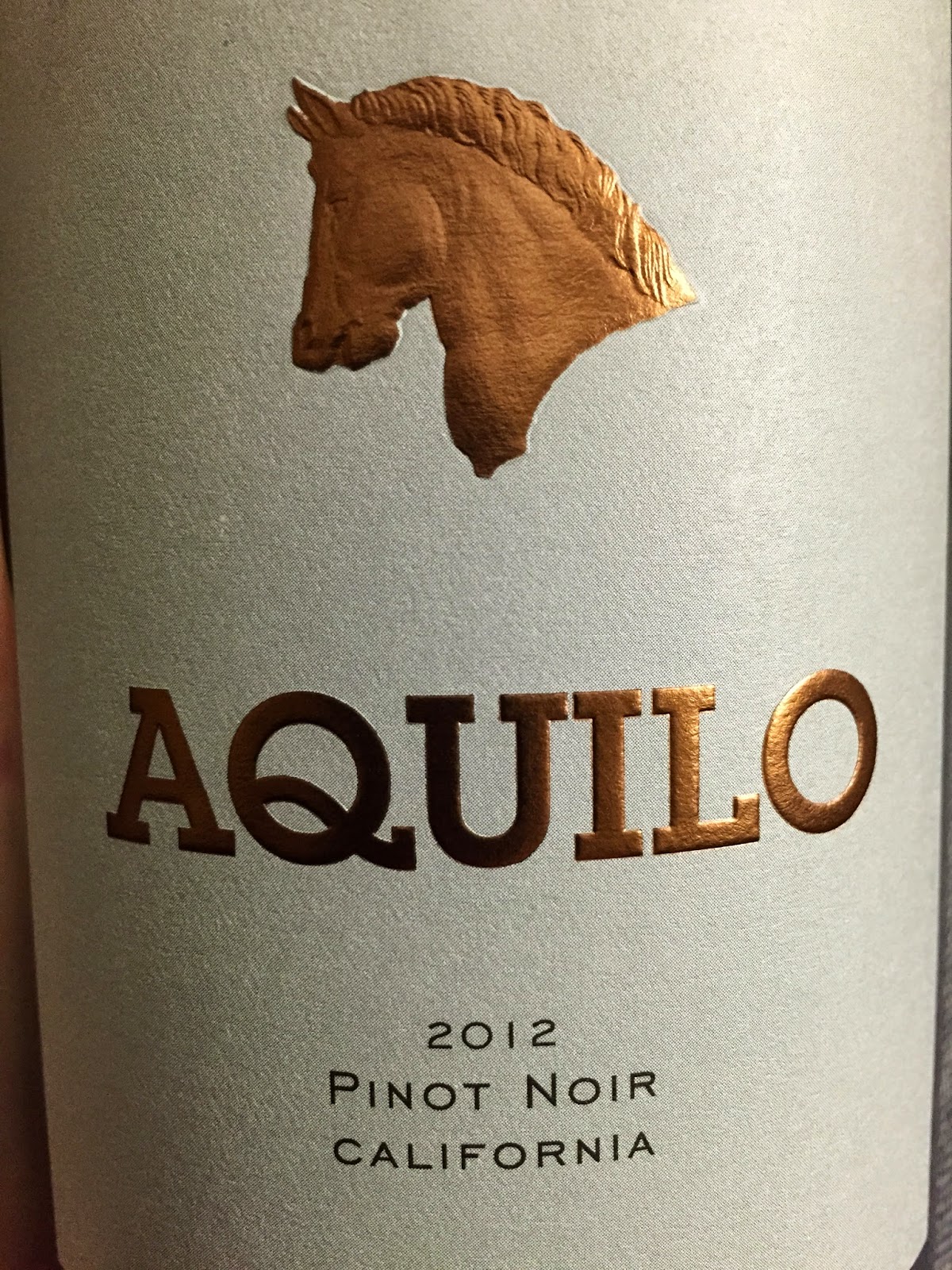 Posted by The Jumping Percheron at 10:10 PM