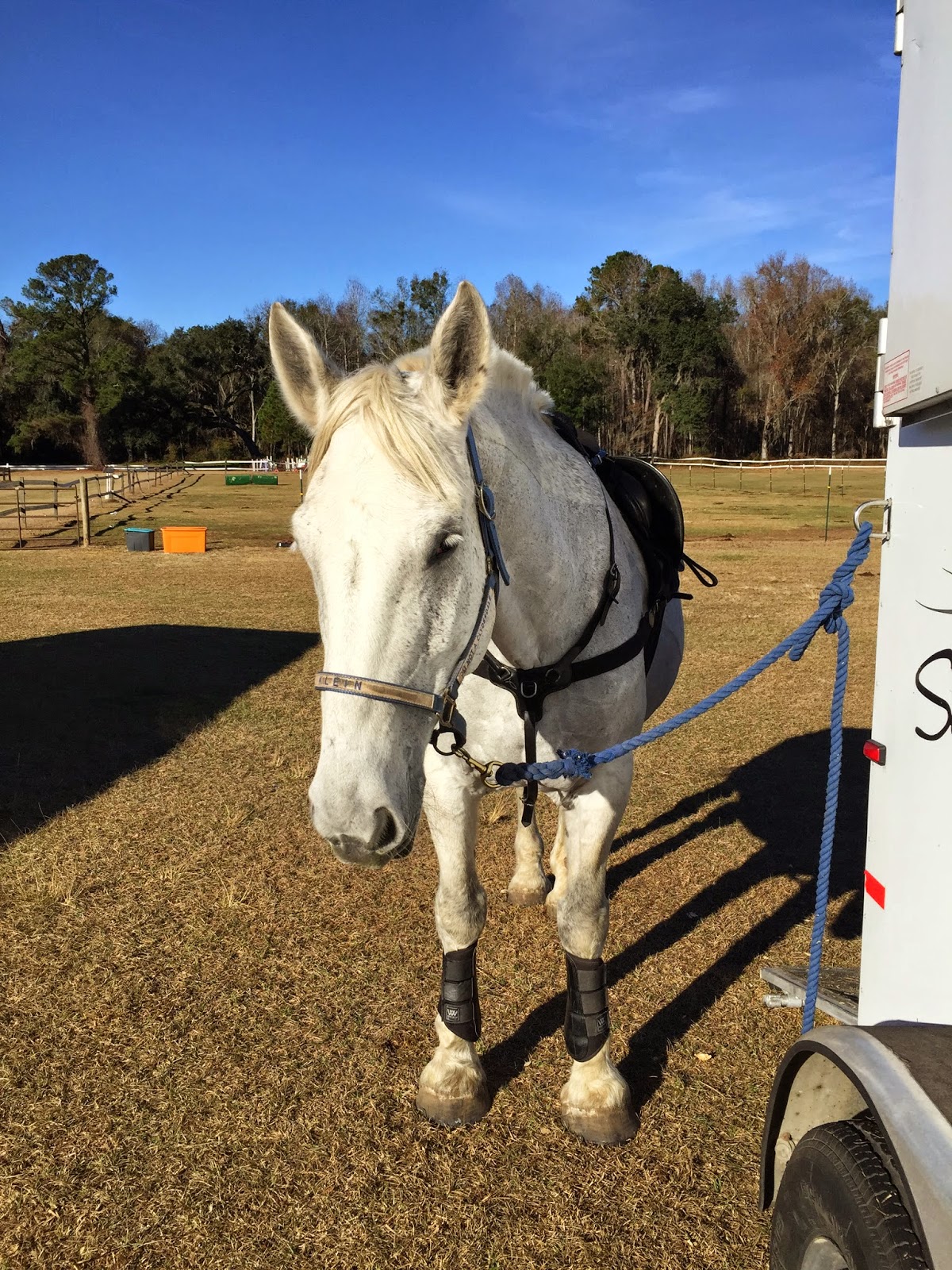 Getting tacked up for our lesson today.

I have some pretty cool slow motion videos of us jumping from Friday, as requested, but I have to hold off on posting them until the next post.


First we have to take a time out and talk about today.  For almost two months now, every time we go to load up to go somewhere Klein has thrown a fit.  Some of them minor, some of them complete meltdowns.  This isn't like her.  She has traveled to Hawaii and back and traveled extensively around several states to compete in horse trials.  In other words, there is no reason for these fits.  A few times during these years I have had her, she has had melt downs over random things.  Every horse is allowed to have days like that.  But lately this has become habit, not a bad day.  A bad habit.

I honestly am not sure why she started this behavior because she has NEVER won. She always gives in and just gets on the trailer quietly once she gets over herself.  Nothing else has changed in the trailer.  I've had this trailer for two years, she has never had a problem with it.  I know it's not the trailer.  I know there's nothing wrong with her either.  She acts perfectly fine when we are doing things at our barn and even after a fit about loading, when we get to where we are going to ride for the day she acts perfectly fine.

Today was the last straw.  We were scheduled to ride with grand prix showjumper Carlo Graziani this morning.  I got to the barn early in case there was a fit.  The last time we went some where a couple weeks ago it took five mins.  But better to give myself extra time in case we needed it, and...we needed it.  To my complete disappointment she threw a fit about loading this morning.

When I say threw a fit I mean it.  Hopping around, squealing, little rears, swinging her hip to the left of the ramp to evade loading, planting her feet like a damn donkey, and just generally having a melt down.  For no reason.  Our routine is the same every single time we go somewhere:  she has breakfast, I hook up my trailer and throw any last minute things in the tack room then she gets in.  This bs went on for 45 mins until at one point, like usual she decided she had her fun and was ready to just get on the trailer and she walked on nicely.  Complete mystery.

Good thing I gave myself extra time.  She loaded pretty much right on the last minute that we absolutely had to be on the road or we would be late.  So, we made it to Tallahassee, we had our lesson with Carlo.  I'll post about that later.  When we went to leave the barn where we had the lesson, for the first time, she gave me a hard time about loading to LEAVE.  Oh, ok...I see.  This is a game.  With some help she caved and loaded in five mins.  I drove home in silence trying to figure what is going on with her.  WHAT started this???  Whatever it is it was snowballing.  My mind flashed back to the stubborn three year old Klein throwing baby fits over learning new things she didn't understand.  She is too big to be throwing fits.  You think your light horse is big when they don't want to do something?

She doesn't scare me.  I have respect for her size and I am always aware of it, but she doesn't scare me.  I've had her since she was two, we've been through a lot.  I know that isn't it.  I don't allow her to push me around, and because of that, she rarely tries.  So I can rule that out.  She isn't barn sour, I don't allow that either, and never have.  I thought about EVERYTHING.  I just don't know where I gave her any inkling that she could take advantage of me and test me like she has about loading.

When I got home after unloading Klein today I was tired and defeated because I was completely mystified.  The Other Half said we will just have to practice loading nicely, A LOT.  He suggested we just start tonight, especially after how rude she was today.  He told me I put Klein on a pedestal and it just keeps getting higher and higher.  He's right.  I do, I know I do.  After she throws a fit about loading and then loads I usually still give her a treat and love on her and tell her I'm sorry we had a disagreement.  I reminded him of that today and he just looked at me and said "That's where it starts."  He's right.  She isn't doing me a favor by loading.  That is her job, she does what I direct her to do.  I don't hope she does things, I expect her to do them.

So, I took a shower and we got back in the truck and headed to Tractor Supply.  I remember always seeing some kind of thing there with a paddle on the end and always thinking that would probably be a good thing to keep around the barn.  I knew we would need some kind of tool to just cut the bs to a minimum.  I found it.  I guess the real name for it is a sorting paddle and as a bonus it has little rattles in it too to make extra noise.  Awesome.

I hooked up the truck and trailer and got the trailer all opened up then we developed our plan of action.  The Other Half would tap her with the paddle when she tried to swing her hip out and evade the trailer ramp.  Once she was on she would stay on for five minutes, then I unload her and we repeat.

The first time, I walked her up to the ramp and she started to plant her feet.  I turned her around and walked toward the trailer to load her again and she swung her hip to the left to avoid stepping straight on the ramp.  The Other Half was ready and waved the paddle at her.  She kept on swinging her hip so he tapped her with it.  The rattles got her attention too.  She tried to swing her hip to the other side but he stood behind her with it and she went right on.  We started the timer.  While she is on the trailer she's fine.  Miss manners.  Quiet and calm.  Stands like a statue.  Another sign she's playing games.  We walked away for the five minutes she was on the trailer.  I told her "good girl" when she loaded but that was it.  No treats or any of that, because, like I said earlier, she isn't doing me a favor by doing what I tell her to do.  She is supposed to do what I tell her to do. 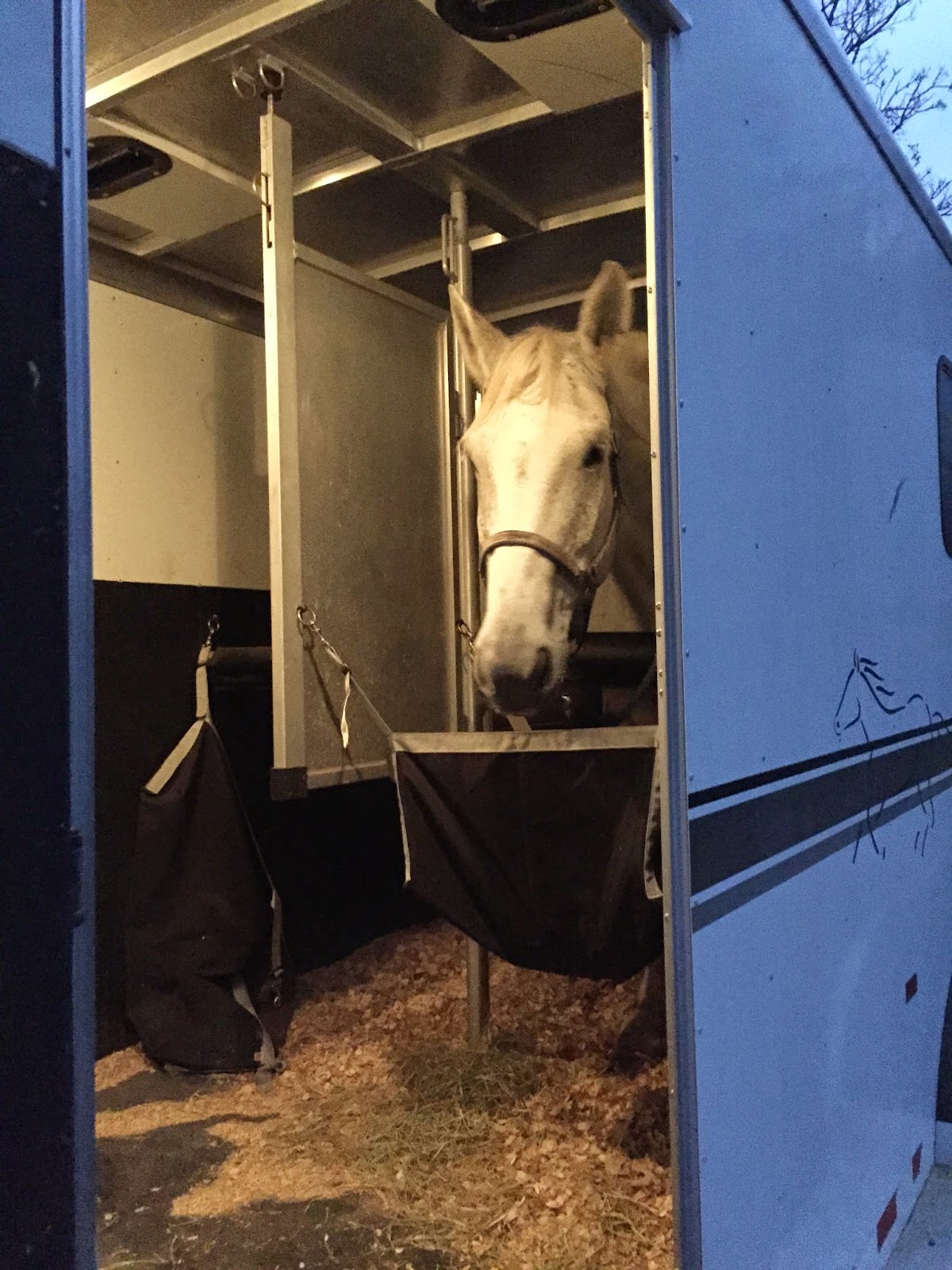 The plan was to just repeat this process until she walked on with no drama then do it two more times just to reinforce the point.  Funny thing.  The first time she loaded it took her about three minutes.  Every time after that it took her less than one minute.  It was like we were peeling away the layers of an onion.  With each time she loaded easier and easier.  There was no hesitation, no looking around, she just walked on like she did before the fits started.  This just proved even more that she is absolutely messing with me. 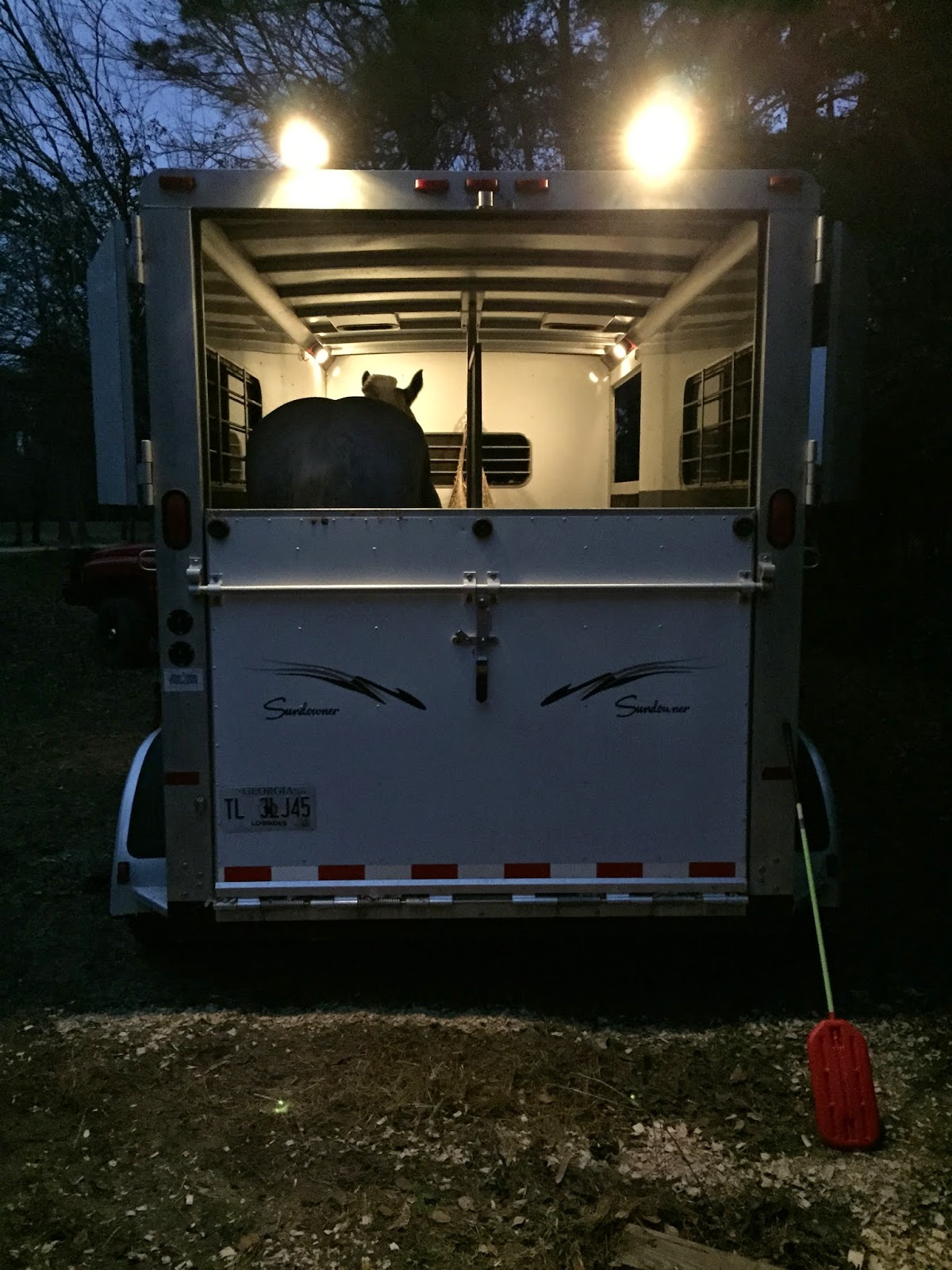 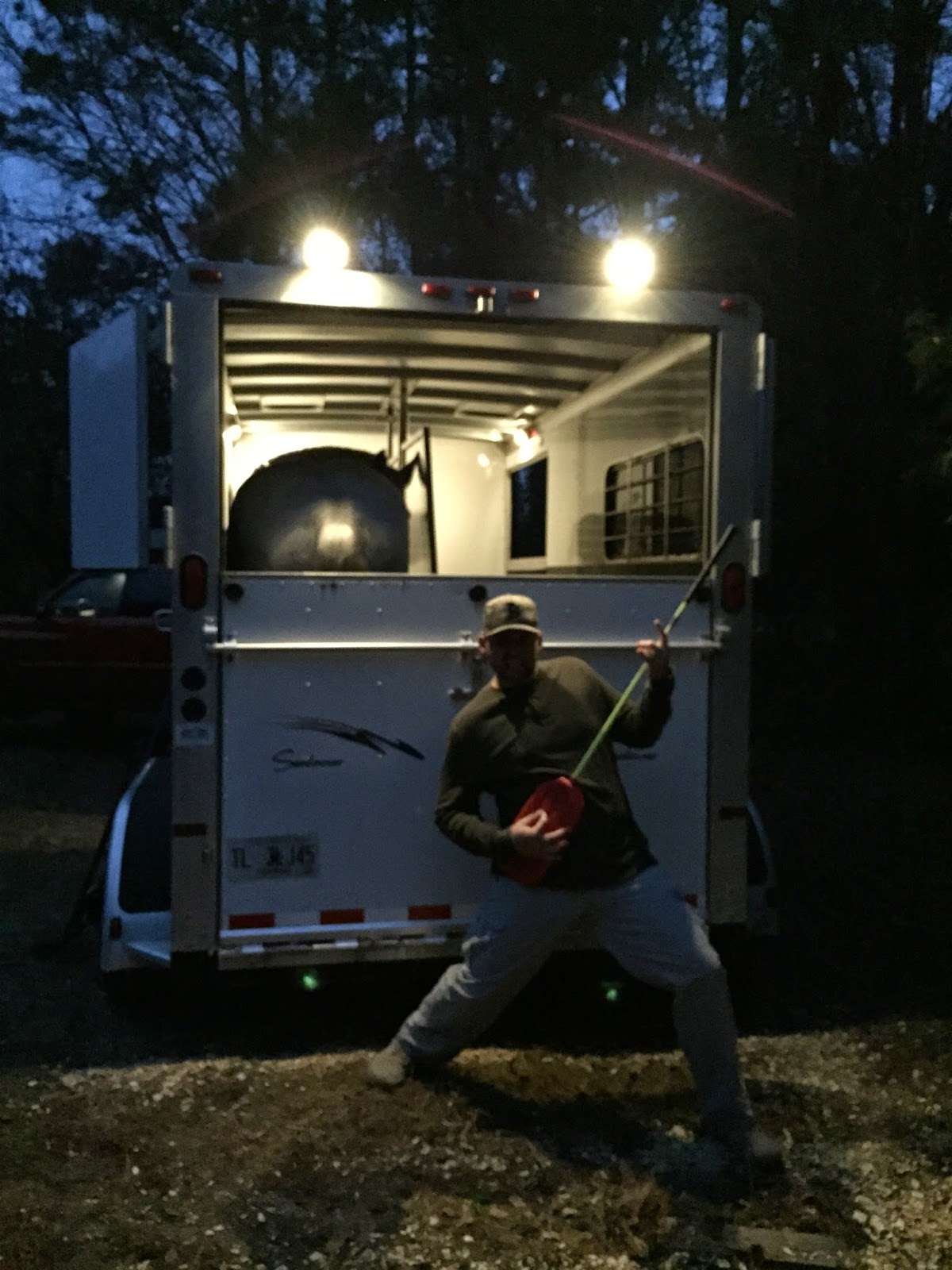 Every time we loaded her I would walk her closer and closer to the barn and turn around and take her back to the trailer.  Then we put her in the cross ties for five minute, then loaded her.  Not one OUNCE of hesitation.  By the fifth time the Other Half didn't even pick up the paddle.  By the third time he was just standing there with it in his hand.  One of the times we walked her to the gate of her pasture and Mochi came down to say hi.  Then I turned her around, and back to the trailer we went.  For the final time we actually put her out in her pasture for 15 minutes then went and got her and walked her straight on the trailer.  We loaded her a total of ten times.  By the third time we lost daylight and she was loading in the dark with just the trailer load lights and interior trailer lights on.  Just one more reason that showed she all of the drama was a game. 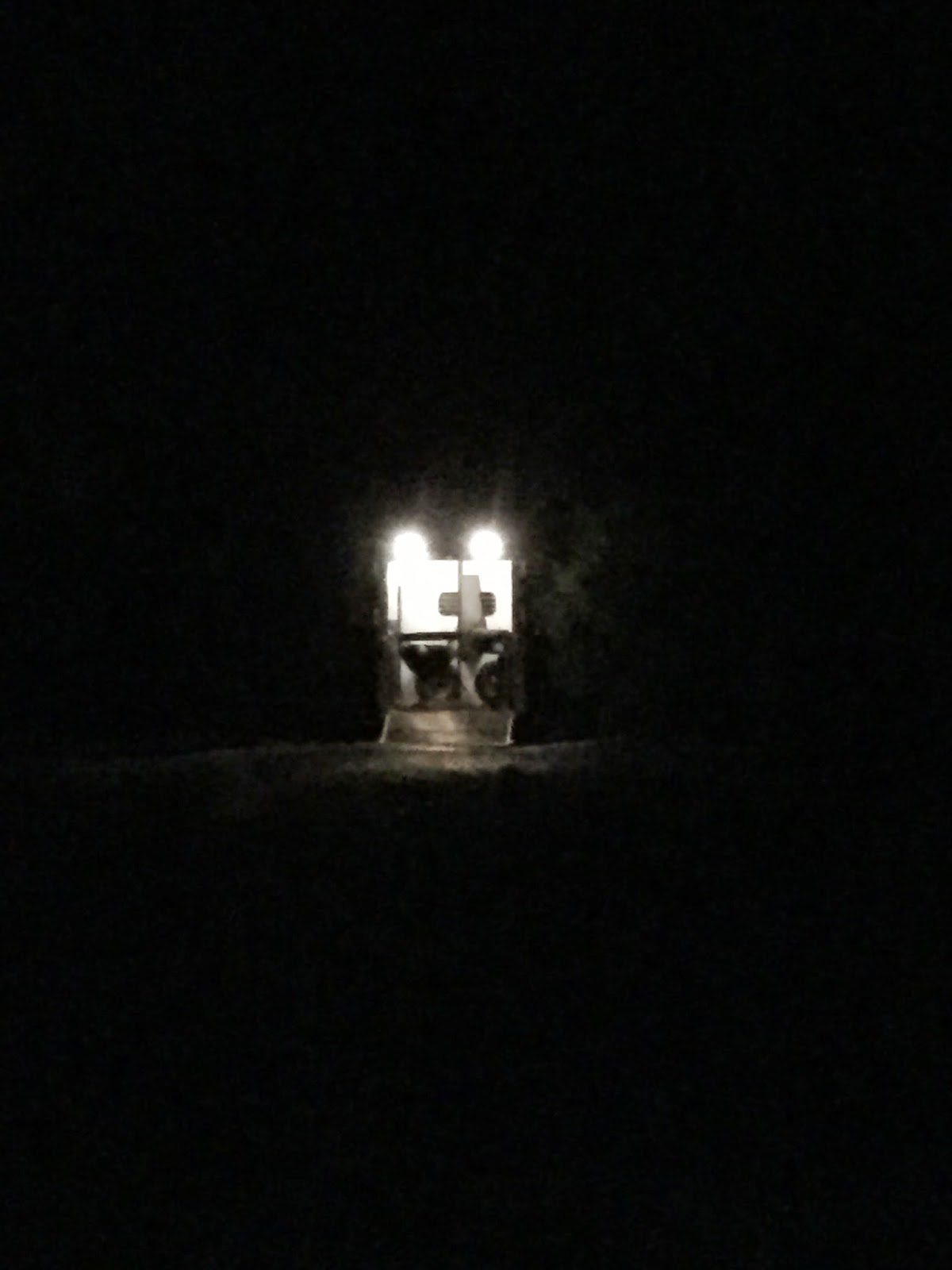 Walking from the barn to the trailer.  She was walking right on with no convincing needed by this point.  She can load in 30 seconds in this condition but not in daylight?  Ha, funny Klein, nice try.

We will play that game a couple nights this week.  I am pretty positive she put two and two together.  Her behavior did a complete 180.  She was back to normal.  She loaded like the Klein I know, not the drama queen that has come around lately.  I suspect she might have slightly figured out she weighs ten times more than me.  That is unacceptable.  ESPECIALLY when your horse weighs 1,500 pounds.  Well, tonight she fell back in line, and it was so easy.  Her fits are clearly all smoke and mirrors.

After doing this a couple nights this week, we will continue it for the next couple weeks at least once a week.

Huge thanks to the Other Half.  I was so tired when I got home today.  I had been up since 4:45am.  If he didn't say "Hey let's just start this NOW."  I would not have went back out this evening, I would have waited until tomorrow.  He is such an awesome horse husband.  This was a team effort.  This was all his idea tonight, and it could not have went any better.
Posted by The Jumping Percheron at 10:01 PM