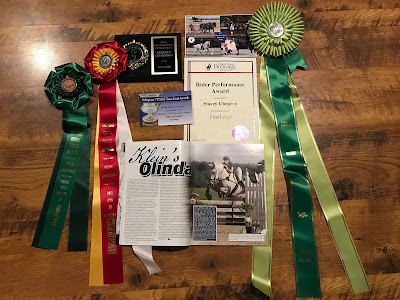 Championship ribbons/plaque, USDF First Level Rider Performance Award, Percheron News feature in the current edition, and a USDF notification of being preliminary award winners with scores to be finalized this week.

Our dressage season has officially come to an end for the year.  Klein and I got everything accomplished that we set out to do this year both recognized and unrecognized.  Super B got a taste of what shows are all about and made a massive improvement that I could not be happier about.  Overall it was a great, successful year filled with new experiences and more learning (cause we all know that never stops). 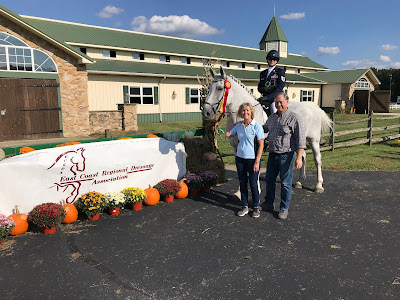 Klein ended up as the First Level Reserve Champion for the East Coast Regional Dressage Association.  She was 6th in the Eastern States Dressage and Combined Training Association's First Level Championship.  I would have liked to have finished better than that but that was also less than a week after my fall and my goals quickly readjusted to just being there.  I just wanted to make it to the show and not have to withdraw.  I was still riding in compensation mode for the terrible pain I was still in and it reflected in Klein.  She was great, but I was not as active as a rider as she needed me to be.  Our connection suffered and that's where we lost some points.  I honestly think that the first judge was not really a fan of Klein.  I had some pretty negative comments on the test where the word "lacking" was written repeatedly.  That's fine.  We deserve that, our connection WAS lacking.  Thankfully we did our best work at the recognized shows this year. 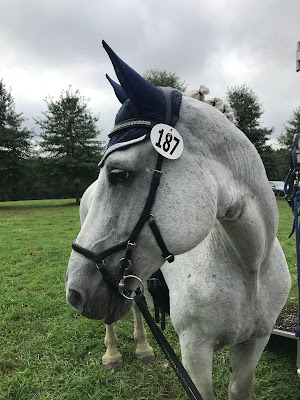 I call this look, "peasants." 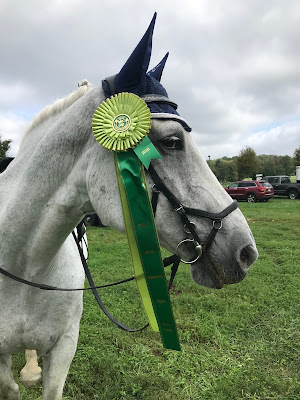 Still so very thankful I was able to still ride by that show.

As you all know, Klein also participated in several USDF Sport Horse breed shows, one of which was at the infamous Dressage at Devon.  Speaking of USDF, I had set some goals with the All Breeds Program this year and we accomplished them all.  Every single ride and in-hand presentation was a qualifying score for us that went toward year end awards.  It looks like we will be accepting Champion for three different categories with the USDF All Breeds program this year.

Super B made a BIG improvement in her dressage work.  She continues to improve with each ride.  She was 6th in her division with the East Coast Regional Dressage Association.  She would have most likely been Reserve Champion if she hadn't gotten a bit distracted in her first test.  There was a circus going on outside the indoor with trucks driving by within 10 ft of the doors, dogs that were locked in a trailer tack room right out side the indoor were going absolutely INSANE (the prizelist said no dogs allowed too of course), that trailer also had a horse that was screaming its head off every five seconds the ENTIRE time we were there, and there was another horse right outside of the indoor screaming its head off too.  At the end of the first test the judge actually said to me that it wasn't really fair to B that all of that was going on.  I mean, stuff like that happens at shows, she has to get used to it, but it was bad timing that day. 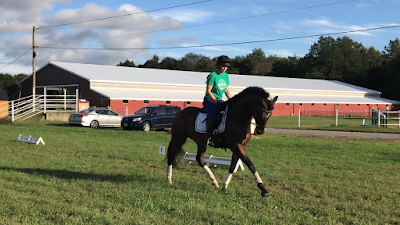 Recent schooling ride.  I just love her.  Just look at her!! 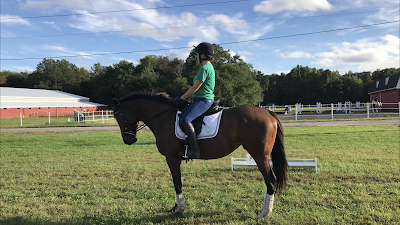 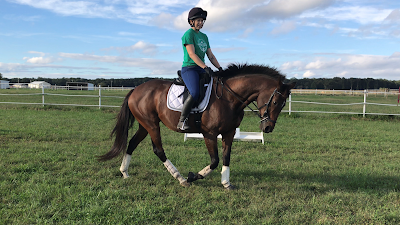 In addition to the circus, people pulling in were being stopped if there was a ride going on in the outdoor.  B has to learn to deal with all the commotion, but if you are going to stop vehicles by one ring, you need to be fair to the other ring and enforce the same rule as well, and that wasn't happening.  Also, why put the Starter Horse division inside?  Put them outside and put Starter Rider inside since they're going to be on more experienced horses.  Such is horse show life.  So with the distraction, B's first test was a 64%, and who can complain about that?  That was her best score yet, so just imagine what she can do without a distraction.  The judge also told me that the rest of the test was very nice. 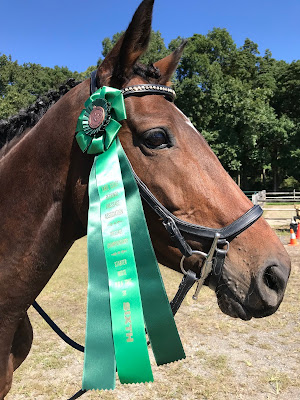 First championship ribbon!  There will be more where this came from! 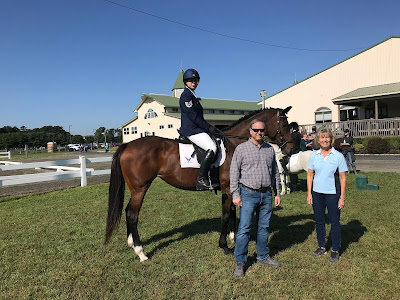 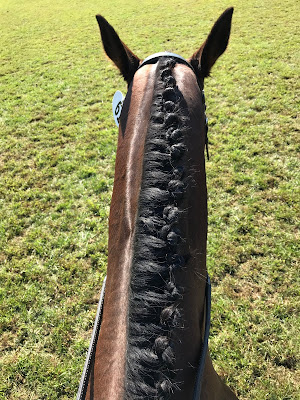 Thickest light horse mane ever.  She sure loved being braided though.  She fell asleep in the cross ties while we listened to Pandora and I braided.

The second test she had no issues and scored a 70%, and who can complain about THAT?  A 70%?  A 70...when a few months earlier at her first dressage show I was questioning if I was going to be able to get her IN the ring and keep her in it.  I don't care where she placed after seeing that 70%.  I couldn't have asked for better from her.  She was great overall that day though.  Handled the usual ridiculousness of people not paying attention in a busy warm up ring and hung out on the trailer waiting for Klein to finish up that afternoon. 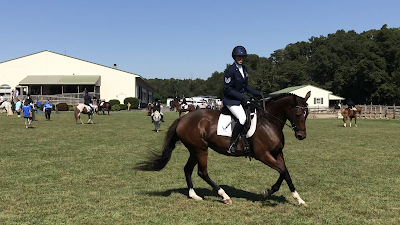 I mean...just look at her.  What an improvement. 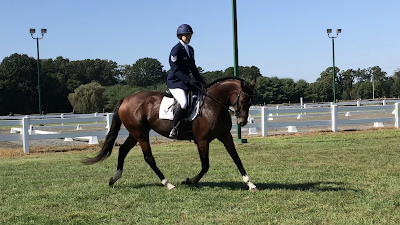 In addition to year end USDF awards, I still have to submit my paperwork for my year end ESDCTA awards, which I will do next week.  We should find out by December how we did with those.  I am super proud of my mares.  We worked hard, and our hard work paid off.  I can't wait to see what we can do next year!
Posted by The Jumping Percheron at 8:48 PM