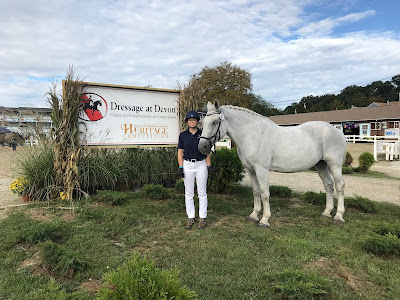 The next morning we were both trying to prop ourselves up with caffeine as we made the drive back.  Traffic wasn't terrible, but I guarantee you if I had brought Klein that morning, it would have been. 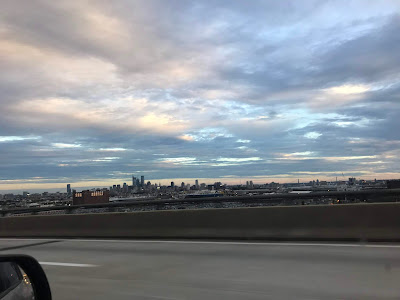 Klein was braided when we got there and I immediately got her out for a walk.  I felt like such a bad horse mom that she even had to stay in that stall for one night.  I must have apologized ten times to her.  She was still unimpressed by the busy atmosphere that morning complete with babies and other young horses in the warm up for the breed show going insane.  One handler was dragged around by a naughty baby and ended up leaving in an ambulance the day prior.  Breed shows are crazy.  Too many baby brains in one new place.

I handed Klein off to The Other Half and tried to tell him where to take Klein but he cut me off and said "I know, I saw where you were" and walked off in the opposite direction from where I was.  I went to change and when I came back I learned that he got yelled at twice by two different officials for walking Klein through the vendor village.  Yeah, I definitely did NOT walk her through there, which is why I was trying to tell him where to go.  At least the second one was trying to laugh and make jokes about it.  That was nice of her, she probably felt sorry for him and could tell he wasn't there with a barn half full of horses, only that he was handed a horse and told to walk.

After that I did some final spot touch ups, put Klein's bridle on her and went to the warm-up.  I practiced setting her up and trotted her around to warm her up and get her in that mindset, then waited for our turn. 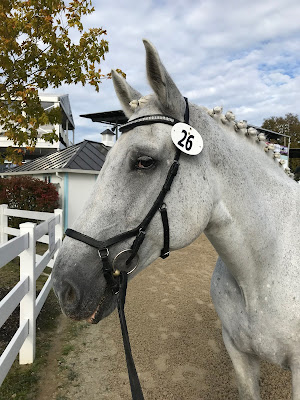 In the warm-up, and unimpressed with the circus around her.

In we went.  I wasn't nervous because to me, it was low threat.  I knew we weren't going to do well up against nothing but fancy warmbloods at the prestigious Devon, but I still took turnout very seriously and proudly presented my Horse of a Lifetime. 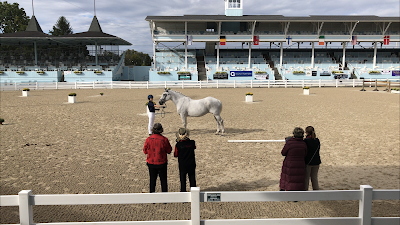 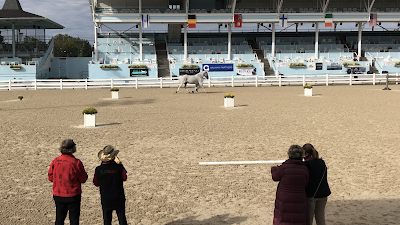 The judge wasn't really a fan but we didn't completely bomb it.  Some of the breed show judges think Klein is the coolest thing ever and think it's great to see something different, others are like, why is this here?  This judge actually wrote "not a horse for dressage."  I laughed, and as expected our score reflected that comment (64%), but it was a qualifying score for All Breeds, so mission accomplished!  Not only did I present a Percheron at the Devon breed show, we accomplished what we set out to do.  We also placed 9th, which meant we got a DEVON ribbon. 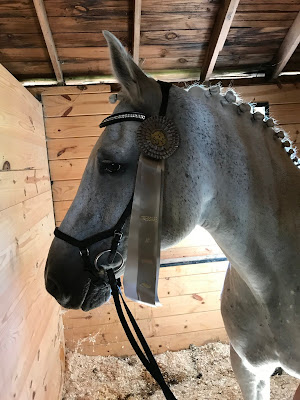 It even matches her!

I know, it's a $2 thing, well maybe $4 since it's a Devon ribbon and it's pretty well put together compared to run of the mill ribbons, but that ribbon does have significance to me.  It is a symbol of a goal accomplished in order to achieve a bigger goal, and what I am pretty sure was a first for Devon too, a full Percheron in the Dixon Oval.

Special thanks to The Other Half.  I am always thankful for him, but some shows are more stressful than others and it wears on me sometimes and he has to be around and deal with it.  Though Devon was somewhat simple, there were plenty of logistical obstacles that made us both count down the minutes until we were on our way home with Klein.

As an added bonus I also stopped by to say hi to Lainey Ashker, one of my favorite upper level riders.  We still use tools that she taught us in a lesson every single ride.  I knew she was competing and we actually ran into her and her mom while they were out walking her horse that morning.  After we were done we went to where she was stabled and talked with her for a bit.  She is always such a cool person to talk with in addition to being an upper level bad ass.  She thought it was great that Klein and I were there and she ended up having a great weekend with her guy as well.  You can read about that here, Ringside Chat:  Eventer Laine Ashker is Dancing at Dressage at Devon, and here Monday Video from Tredstep Ireland:  Lainey Ashker Dances at Devon. 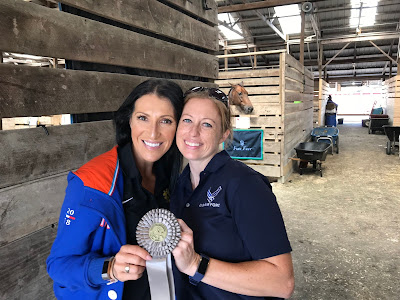 Posted by The Jumping Percheron at 10:00 AM