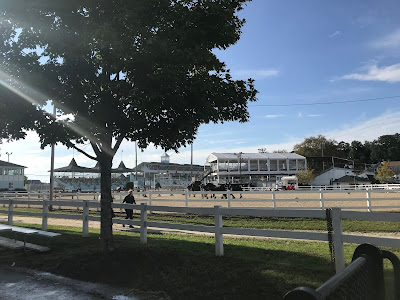 We did it, we competed at Dressage at Devon in some capacity.  It was an adventure to say the least and The Other Half wins Horse Hubby of the year for helping me survive the logistical nightmare that is Devon.  It is honestly an adventure I don't care to repeat.

Klein qualified for the 2018 USDF Breeders Championship East Coast Series Final, so, we went.  I entered her fully understanding that our competition would be VERY fancy, VERY expensive warmbloods.  That was fine, we were going just for the experience and to gather our last qualifying score for the All Breeds Dressage Sport Horse Breeding division year end awards.

Devon is on the opposite side of Philly from where we are.  While in theory it takes an hour from our house to get there, traffic would definitely extend that time by some amount and there is no way to tell just how much.  I also knew that the trailer parking lot was not on site and was at least 8 miles away.  You cannot park a trailer anywhere near that place unless you are loading/unloading.  If you are there just for the day, you have to have a stall reserved. 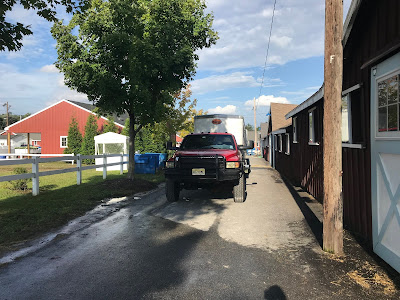 My class was at 9:30am, so I decided the best way to do it was to take Klein over the evening before, park the trailer, and then The Other Half and I would just go home and be back early the next morning.  After a somewhat painful drive over due to Google Maps taking me through a bunch of twisty, turny, hilly, tiny roads through neighborhoods, we get to Devon to find that the stalls are SMALL.  I guess I understand that because Devon is packed into the area that it is in so space is limited, but is Dressage at Devon not full of big warmbloods?  Story of our life.  Every show we travel to that requires us to get a stall, it's rarely adequate size for Klein. 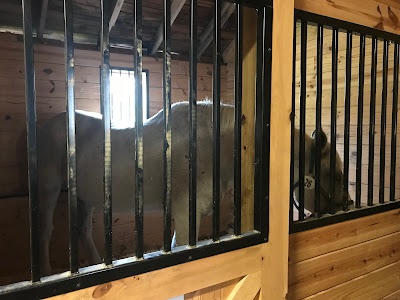 While I was checking in they gave me a map to the trailer parking area and said "do you have a big trailer?"  I said "I don't know?  Is 30 feet big?"  That honestly isn't a big trailer, it is common to see much bigger rigs at shows reguarly.  I would call my trailer a medium.  But the lady said "Oh yeah, that's too big, you can't go this way, or this way, or down this street, or this street, or this street, or this street, it won't fit."  Great.  I'm in an area I am not familiar with and just got told about all these streets that surround it that my trailer won't fit down either because the roads are tiny or it requires you to go under VERY low railroad bridges that would cut the top off a trailer like a can opener. I decided I would just look for main routes and stick to those.  I thought I had it figured out until Google Maps ended up taking me on a 14 mile drive to a service plaza on the PA Turnpike, where I was looking through the fence at the trailer parking lot.

Let me tell you guys how close I was to going back, loading Klein up and going home.  The Other Half went into the store at the service plaza and bought me snacks, threw them in my window and said get going to the trailer lot.  He was NOT about to let me ruin this.  FYI, I drive my truck and trailer, he followed in his car so that we could just leave the truck and trailer.  His car was able to go the way that takes FIVE MINUTES to get to the trailer lot.  He didn't go on a 14 mile scenic route to the wrong place.  After the drive there and that, I was about to be done with all of it, but I made it that far...I went ahead and made the next 8 mile loop to the real entrance for the trailer parking.

The Other Half drove us back to the showground to check on Klein and look around and I was kind of pissed when it took us five minutes in a car.  Again, we made it this far...no turning back now.  We walked around and checked everything out when a lady stopped us to show us this awesome leather conditioner/waterproofer.  I peeked my head over the display into their booth where a nice Aussie man was sitting with a drink in his hand and he asked me "You want a margarita?"  Talk about perfect timing.  Do I????  Can I have six please?  He made us some awesome margaritas and we hung out there for a while before I headed back to Klein's stall to meet with the braider and take Klein for a walk.

Yes, I paid a braider, braiding is not my favorite thing to do.  My braids aren't as good as the pros, but they'll get by at a recognized show no problem.  Also, that whole risk of getting stuck in traffic was a big factor and not a risk I wanted to take.  I'd rather just have her braided that morning by someone that was already on site.

We took Klein for a walk around the grounds and she was unimpressed with everything as usual.  We walked by the Aussie's booth again and he asked if he could share his apple with her.  Klein was more than happy to help him out with that.  Then we had to put one of their hats on her for a pic: 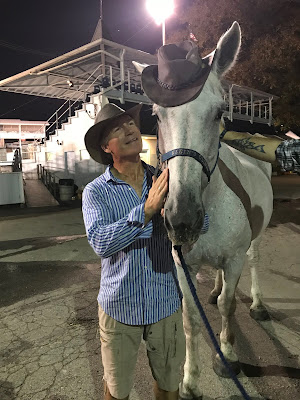 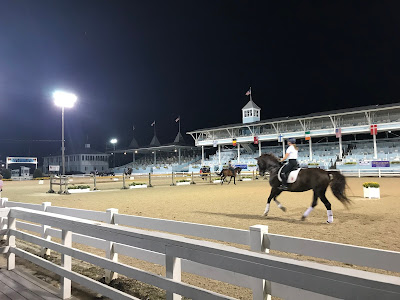 Watching some of the CDI horses schooling. 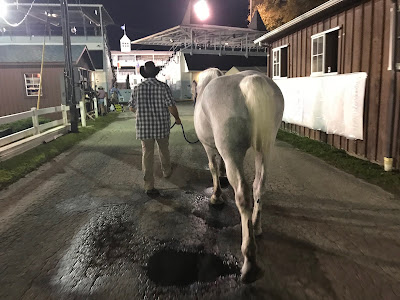 The Other Half taking Klein for a walk around the grounds.

After that we tucked Klein in and headed home for the night...
Posted by The Jumping Percheron at 4:53 PM