"This thermometer HAS to be broken!" aka KNOW YOUR DRAFT HORSE! 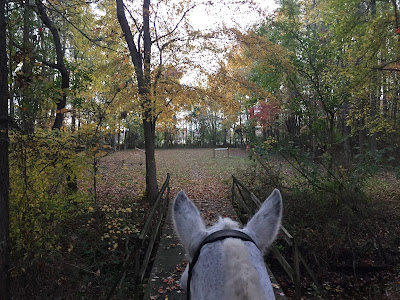 Klein baby happy to be out this evening for a walk.  We were checking out our ring before heading across the street.

It's a well known fact that full drafts are very stoic, yet somehow very cheap dates when it comes to drugs for veterinary procedures.  Klein has always been a very tough mare and I always have the fact that full drafts are known to be stoic in the back of my head.  I'm convinced that Klein would run herself into the ground before she quits something.  That is something that is ALWAYS in my head when I condition her, and a big part of the reason why I monitor her fitness with a heart rate monitor, so I know exactly what is going on because if there was a problem, she might not tell me for a while.

Last Sunday I brought Klein in for a bath and noticed she was breathing a little heavy, which was weird because she wasn't doing anything other than grazing before I brought her in.  It wasn't hot, there is no other reason she should have been breathing like that.  I grabbed a thermometer and imagine my surprise when it read 103.8.  After about five minutes her breathing was normal again and by this time I had taken her temperature three more times because I didn't believe it.  She was acting 100% normal.  How?

I gave her a bath and had The Other Half change the battery in the thermometer.  Same temp.  I stood there saying "This thermometer HAS to be broken?!"  I put her back out for a while to watch her and she still acted like absolutely nothing was wrong.  She was happily grazing and even took a nap IN the sun.  I had The Other Half grab a different thermometer because none of this made any sense.  Same reading.  W...t...f...?

We gave her a granola bar and she was just as excited as always for it.  We brought everyone in for dinner and Klein was nickering for hers.  She ate normal.  I gave her some bute and checked on her a little while later.  When I went out to check on her she was munching on hay like normal and her temp was down to 101.  I went back out an hour after that, same thing, munching on hay when I went to get her.  This time she was down to 99.  It was about 10pm by this time and I felt like she would be fine through the night. 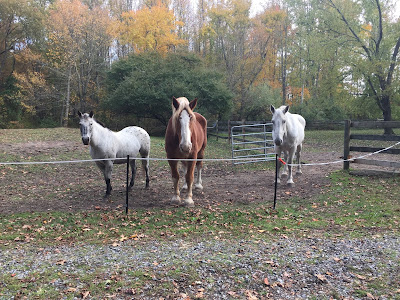 The "excuse you, we're ready for dinner" signal.

The next morning I took her temperature, 99 degrees.  I went to work and took her temperature when I came home, 98.8 degrees.  She was still acting normal.  Eating, drinking, bossing, etc...  She even went bucking and squealing when The Other Half opened the gate that evening to let them into their other pasture.

The next morning I had a minor surgical procedure (nothing serious, just an injection) and I had to stay home for the day.  The Other Half had to stay home to watch me since I was heavily sedated and had IV pain meds for the procedure.  I went straight to bed when we got home to sleep off the rest of the sedation since I was completely out of it.  The Other Half had the ponies where he had a full view of them all day to see if anything funny was going on.  Nothing.

When I woke up I went out and took Klein's temperature, 104.9.  I called the vet and he was out within an hour.  While we were waiting for him we watched Klein take a big drink of water and boss Mochs off the mineral block because SHE wanted the mineral block at that same second.  Her behavior completely defied any logic. 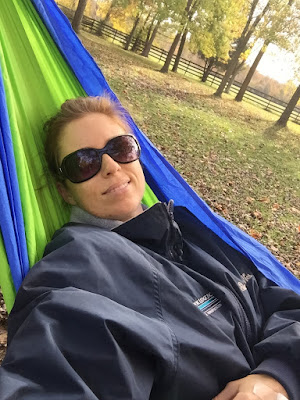 Hanging out in the pasture in the awesome hammock The Other Half bought, waiting for the vet and waking up from la la land.

The good news is, it's just Anaplasmosis (the new name for Erlichiosis, what Mochs had earlier this year).  It's a minor illness from a tick bite.  He gave her an IV injection of antibiotics and bute to break her fever and give the bug a drop kick.  I also had him pull blood to make sure nothing else was going on.  Klein was down to 99 within an hour and a half.  She even had her feet done right after the vet had left and stood just fine for her pedicure.  Unbelievable to me how she could just go on like she DIDN'T have a raging fever.

The vet commented about how stoic these horses are and then said "you know if she was a TB, she'd be on her death bed."  Ha!  But, this is really no bragging right about how stoic she is.  If something is wrong, I really wish she WOULD be dramatic and let me know.  Thankfully I noticed that short, five minute, heavy breathing episode or who knows how long she would have let this go before sounding the alarm for me.  She is one tough mofo.  She doesn't go down without swinging that's for sure.  OG status re-certified.

The point of this is, know your horses.  Know their behaviors, their routine, or even what a normal temperature is for them.

Klein is on five days of doxy (orally) and her temp has never went back up since it broke with the injection.  I took her for a walk across the road tonight just to get her out, since clearly she doesn't feel bad.  We kept it to a walk though.  She doesn't like being idle, and I'm sure it makes no sense to her because she's not feeling bad.  I want her to finish her round of doxy before we start any real work.  I don't want to tax her system, I want that bug GONE for good. 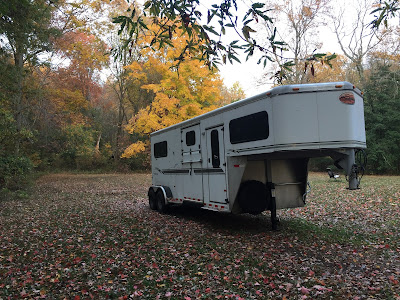 Just a pretty pic of part of the farm this evening. The leaves are starting to get really beautiful this week.
Posted by The Jumping Percheron at 8:31 PM