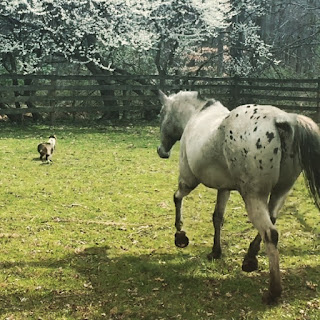 If you follow me on Instagram (jumpingpercheron) you know exactly who Manny is, and that every Monday is Manny Crush Monday. We have had Manny for almost two years now. We got him from a former barn owner in Georgia after we lost our beautiful Siamese girl suddenly to kidney failure. Manny had always been super friendly and begging for attention every time we went in the barn owner’s house and she always would say “Oh look at him! You guys need to take him for a couple days and just see what happens!” He was only five years old, she got him because he belonged to a couple that had broken up and neither of them could keep him anymore because of where they each had moved to. She was never one to let an animal end up without a home so she took him and had been casually on the lookout for the perfect forever home for him.

He is basically the real life Cheshire cat. He is a Maine Coon, and just a big lazy guy that loves to be around us in general. We took him home for a week and he walked in like he owned the place. I knew immediately he wasn’t going anywhere. The rest is history. 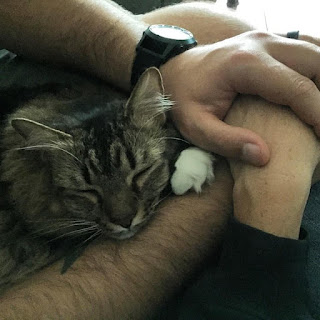 He loves to be around us, he is NEVER hiding somewhere. 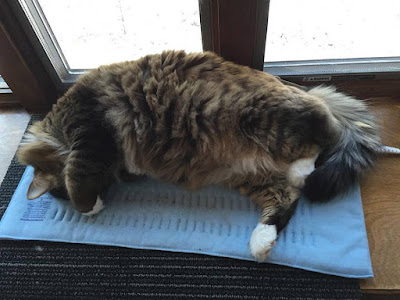 Don't you hate when no one turns the sun off so you can nap??  And yes, that is a heating pad, because he isn't spoiled, at all.

Manny is an indoor kitty. However, The Other Half bought him a “Kitty Holster,” I’m not joking that’s what it’s called-see it on Amazon here, and takes him out to explore once in a while. Last weekend, he met his sisters. Wes didn’t really care, but the girls did. 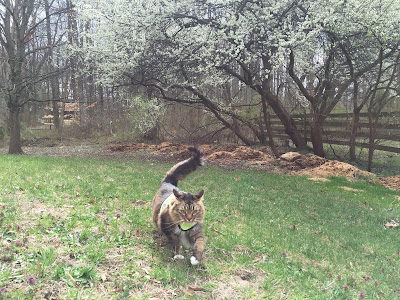 Adventuring.
Mochs likes to play in general. Only when a dog chases her and acts like it has the incredibly dumb idea of trying to go after her legs will she fire off a warning shot (and if it’s lucky she’ll get to it before I do). Knowing that, I wasn’t worried about her. Klein doesn’t generally try to get other animals to play, just the pony mare does of course. Wes took zero notice of this whole occurrence. Mares are safe, he can see mares, grass is green, Wes happy. 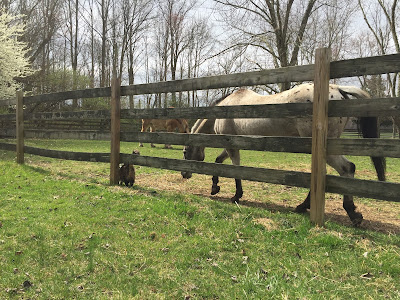 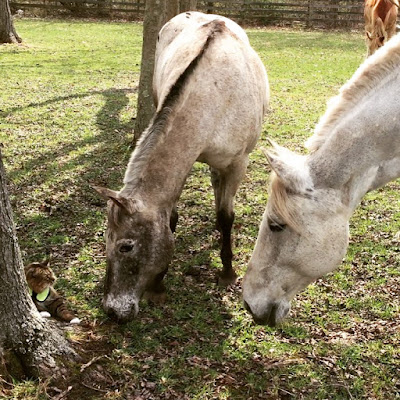 Verifying his credentials, making sure he's one of us.

The Other Half managed to get a video too.  I think Manny got his fill of the outdoor life that day. He says big sunny windowsills overlooking his bird feeders are where it's at, not outside getting run around by a pony.

P.S.  Mochs' trot isn't looking too bad these days is it?  Osphos hits its full effect this month!
Posted by The Jumping Percheron at 10:03 AM