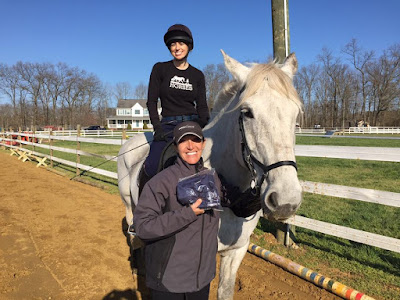 Lainey with her Jumping Percheron polo (yes merchandise is coming SOON), that she said she will wear with pride!

Our clinic with Lainey Ashker was this past weekend.   Of course, the weather had to be nice up until it was clinic time.  It had been in the 60’s, the week before we hit 72.   Then Saturday rolled around and it was 34 degrees and rain/snowing.  My jumping group was in an outdoor arena on Saturday and I wimped out for that.  34 degrees in a downpour of rain with snow mixed in just was not my idea of fun.  I didn’t want to go and be distracted the entire time by freezing to death.  I know, once you get moving you typically warm up, but what happens when you stop to wait for others to do their rounds and you’re soaking wet?  I wanted to jump with Lainey BAD.  We were signed up for her Training level jumper group.  But, I was more than happy to donate my lesson fee that day to Lainey’s Rolex fund and stay inside.  The next day Lainey said she didn’t blame me because it was pretty miserable.

I get that we are eventers and that horse trials don’t easily get cancelled in crappy weather.  But, that is different if you are there trying to obtain a qualifying score for something.  If the weather was like that at a horse trials, I would man up and ride.  It’s also a bit different when you warm-up for 15 minutes, and go in the ring/down the xc course for six minutes, or less (stadium).  This would be an hour or more of stop and go.  Also, I KNOW Klein has no problem going in a sloppy mess, snow, a downpour, or even 55+ mph winds.  We’ve done it.  We even done it in thunderstorms with lightning crashing around us because we were out riding when a storm came out of nowhere.  It would have been different if Klein was a big baby in crappy conditions and needed to get out there and school in them.  Speaking of horse trials, we have one this weekend so I also didn’t want to take the risk of getting sick from being in the cold, wet weather.

I was equally excited for my dressage lesson with her.  That lesson was a private lesson on Sunday and the weather was much improved.  It was a little cold, but sunny and beautiful out.   Lainey immediately loved Klein to death as soon as we walked up.  She asked me what we were currently working on, what we have done, and what our plans were for the season.   I gave her a quick run-down.

As soon as Klein and I began trotting she said she was really impressed with how she carried herself and she was very happy with my position.  She said we were going to work on getting Klein super collected.  She had us work on haunches-in on a circle at the trot and really getting Klein loaded on her hind end.  Klein gave me the most collected work she EVER has.  It was AWESOME!  It was pretty easy too, this was a classic example of the rider not knowing how to explain something to a horse.  Lainey gave us the missing pieces we needed to step up our connection and the degree of collection Klein is capable of.

She also had us working on haunches-in at the canter on a circle and I felt a distinct difference when Klein would collect to a higher degree.  I could feel the individual steps, it was pretty amazing.  She kept saying to think of slowing her down almost to the walk, but keep the canter.  She had me sit toward the back of my saddle and lean back a little more than usual, but stay centered and that was just the right amount of seat aid combined with a little outside rein and outside leg for Klein to take those new steps.  Then we would spiral in to her and leg yield out of the spiral.

I told her we also needed to sharpen our down transitions into the walk and she had me really control my posting and Klein responded immediately.  This lesson was quickly proving to be everything I hoped it would.

She had us work on our stretchy trot and making sure Klein didn’t speed up for even a half step.  That was also controlled by just changing my posting.  Klein responded immediately again to that.

We worked on keeping our connection in our leg yields and worked on our lengthenings.  For leg yields she had us doing the most collected, controlled steps we’ve ever taken.  She had some cavaletti set up for us to work over for some exercises with leg yielding.  Same thing at the trot.  She had us in a marching, collected trot, it was amazing!  It was so easy too.

She also was making comparisons to things you do in the gym.  I was like ahhh you're speaking my language there!  I knew exactly what she meant and I know exactly how it feels, so I knew exactly what Klein was dealing with as far as the exercise we were doing.  As seriously as I take rider fitness it was really nice to hear those terms coming from her.  I asked her what she does to prepare for Rolex, and for her fitness in general, and she told me she meets with a nutritionist regularly, is in the gym, and that she likes to run.

I really loved the way Lainey teaches.  She is the type of person overall that if she wasn’t a big name rider/trainer I would be taking regular lessons with anyway because everything she says makes sense.  I’m sure we have all been to an instructor or two that you just don’t quite mesh with, or the way they explain things is confusing or hard to follow.  I had one dressage instructor that I stopped riding with in New Mexico because we just were not improving.  I found an I1 rider to train with and she had an issue I had been trying to work on fixed in 20 minutes of riding with her that was not accomplished in after two months with the other instructor.  You have to recognize when to say when and go somewhere else if you want to achieve your goals with instructors.

For lengthenings, she had me drop my reins and give her the biggest trot I could get.  She just kept yelling “MORE MORE MORE BIGGER MORE KEEP GOING MORE!!!!”  Once again, no surprise, I felt an immediate difference.  I really wish I would have got video of that.  I was alone, so, no video of any of our ride, sorry guys.  On the other end of the big trot was having us get a super suspended trot over the cavaletti she had set up for us.

Every single thing Lainey had us do got an immediate and noticeable response from Klein.  That was hands down the best dressage lesson I’ve ever had.  She gave me some GREAT tools and homework.

It sounds like she will be in our area again this summer, so of course, count me in.  Next time we won’t miss out on our jumping lesson either.

I was already a big Lainey fan, but after this weekend, I’m an even bigger fan.  She’s just a very cool person in addition to one of the best eventers out there.  Her mom, Valerie, is also one of the nicest ladies I have ever talked to.

I did get one other picture from that day…  The trainer that organized the clinic (thank you again to Livv Lynn Eventing!) texted me this while I was at work yesterday and I started laughing my ass off in my office.  I had to pee before our ride, and since I had no one to hold Klein, I unbuckled one of her reins and held that end while I was in the port-o-potty.  While I was in there, someone rolled up on a Gator and took a picture!