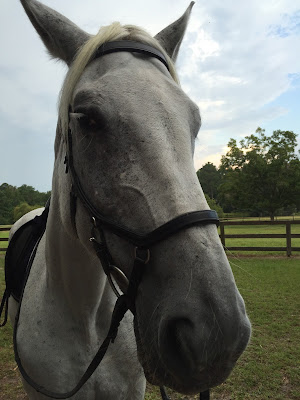 The Princess is back, for real this time.

Last month I wrote a post about how Klein was back to work from her summer break.  Well, that was short-lived.  The next week we were out on a hack and after some easy cantering we started walking home to cool out.  I noticed something strange, Klein was sweating under her tack, but not on her neck.  She always sweats on her neck.  Also, we walked a good bit and she was still breathing a little too hard for what we just did.  We didn't do any work that was that hard.  I knew immediately what was happening.  She was starting to not sweat.  We made a bee line for the barn and I hosed her off until her breathing was completely normal then put her in front of her fan.

*Sigh* I worried about this potentially happening to Wes during his first summer here since it's such a difference from Utah, but not Klein.  Klein has been here three years and has never had an issue with sweating.  She even had been having a leisurely summer this year.  Two weeks prior to the ride where it began, Klein, Wes, and Moch were drenched with so much sweat one day I thought it rained on them.  So she was not having any issues until one day it just happened.

Anhidrosis is an extremely common condition down here.  I heard about it within the first couple weeks of being here.  People were talking about non-sweaters and the product called One AC that everyone uses for them.  I overnighted One AC that day and had Klein on it by the next afternoon.  I have read over and over that Guinness beer helps non-sweaters, so I gave her that in her feed that first night too.

Anhidrosis is largely a mystery.  There is no exact known cause for it.  Some horses can come from cold climates and never have an issue here, then there are horses that were born here and lived in this extreme environment their whole lives and one day it is like someone flipped a switch and they just stop sweating completely.  Thankfully Klein did not stop completely, I caught it immediately.  She was sweating under her tack, but that is still far from adequate.  It also has nothing to do with electrolytes.  You can load up a non-sweater with electrolytes and it will fix nothing, it has to do with the dopamine in their system.

UF did a study and found that even horses that are pasture pets just magically stop sweating sometimes.  So it's nothing an owner is doing or not doing, a horse's system can just shut off like someone flipped a switch in them in this climate.  Some information I read indicated that 20-30% of horses in the Gulf States are affected by Anhidrosis.  It's not so much the fact of how hot it is here, it is the combination of heat with the extreme humidity that is the problem.  Thoroughbreds are the breed that is most prone to it and seem to get it the easiest.  A lot of research has been done on horses on the track.  But everything out there comes to the same conclusion, there is no definite cause and there is no cure, only management.

The most common suggestion is to move the horse to a cooler climate.  Some horses go back to sweating normally by the next summer, some don't.  There is just no way to predict what will happen until next summer rolls around.  Being that it is manageable, as long as the horse is on a supplement that works for them, they can be ridden normally.  So really, it's not a career ending or inhibiting thing. 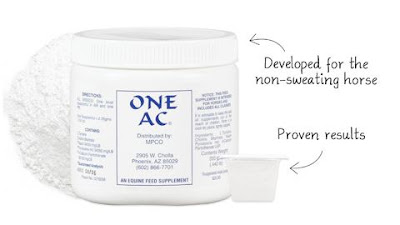 I read a lot of reviews, posts, etc... about One AC.  The majority of them saying it worked great, a few saying it didn't help their horses.  There are a couple other supplements out there that are for Anhidrosis (Platinum Refresh, Perspirade, TrueSweat), but down here I have heard nothing but One AC for non-sweaters, so I wanted to try that first but was happy to know that it's not the end all be all and that there are other options just in case.  Luckily, no other option was necessary.  One AC had Klein sweating within a day and a half.

Fortunately we had a lot of storms rolling through on a daily basis when I noticed this whole thing and it was cooler than normal in those two days where I noticed it and One AC got her sweating.  I would check Mochi and Wes for comparison.  If they weren't sweating just standing around I knew Klein wasn't sweating not because she couldn't but because it wasn't hot/humid enough at that particular time.  I also would also count Klein's respirations per minute to make sure her breathing wasn't labored.  If Mochi and Wes would have been sweating Klein would have been in a stall immediately with fans on her 24/7, or if she was standing outside with labored breathing.  I try to avoid that because she hates being locked in a stall.  She'll deal with it, but being in is not her favorite.  Plus, their pasture is about 90% shade too, so they are not standing around in direct sun, unless they really feel like it.

In my initial freak out on that ride of course I texted my vet as soon as I got Klein cooled down and in front of her fan.  I asked if she needed to come out and draw blood, etc...  I told her I was overnighting One AC and she agreed that we should just get her on that immediately and see if it works for her because she said everything I was describing was a mild case of Anhidrosis.  I was also comparing her to another horse on the property that is a "dry horse."  He is one that has lived here his entire life and one day his system just shut off.  He WAS having labored breathing and would be out swimming in the pond to cool off or standing in shade early in the morning.  He is a full blown case.

My vet also said she has seen an increase in cases this summer because it has been extra miserable.  She said the problem is that down here a horse's system never gets a break.  It never cools down.  At night the humidity stays and it will still be 78 + degrees.  Anhidrosis appears to be caused by over-stimulation of the sweat glands.  It will be in the 80's here into October.  Some people down here keep their horse on a lower dose of One AC year round.  You can also take them off of it when the weather cools down to the low 80's during the day and then just start them on it in late winter before it gets hot (there really is no spring here, it's winter then it's summer).

Klein's loading dose was finished last Tuesday.  Now she gets it once a day.  I was looking forward to getting her back to work, after I made sure she was sweating normally in work when Tuesday morning she came in with...stocked up front legs.  Oh Klein baby.  She is really turning into my delicate flower.  I know what the stocked up front legs are all about though.  They are on round bales right now because the grass at the barn is lacking in the nutrition department.  This happened last fall at our previous barn too when they were on round bales.  I suspect some weed popped up in the hay field undetected and got baled and Klein is allergic to it.  My vet said we can do a blood panel and allergy test but it may not even pinpoint what it is.

Last year all four legs had some degree of fill when this happened.  This time it was just the fronts.  The left was a stove pipe and the right, only was swollen on the inside.  It's so weird.  Actually, I suspect I caught it before the right leg had a chance to completely fill.  The Dex put the stop on all that.  Last year all four legs did not swell at the same time it was like fronts filled then the backs were slowly following, it doesn't happen all at once. 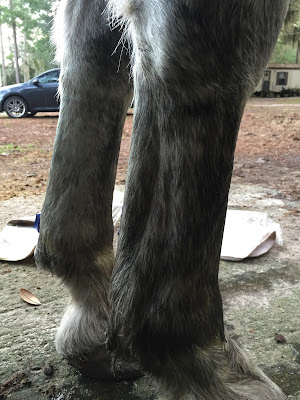 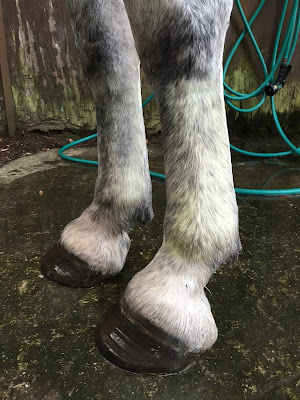 Yet the other side is completely filled, and the left leg was swollen all the way around.

I sweated her with DMSO and Furazone and gave her 10 cc's of Dex for two days.  I cold hosed after I unwrapped her in the morning and washed her legs off.  On the third day no wraps, only cold hosing and 5 cc's of Dex.  That's all she needed.  She was back to normal so Saturday I finally got to do my test ride, and........she feels great!!!  She also was sweating completely normal.  I think NOW (fingers crossed) my Klein is back in commission.


P.S.  After the swollen legs thing, my vet did come out, so we did get the thumbs up before returning to work.
Posted by The Jumping Percheron at 10:08 AM