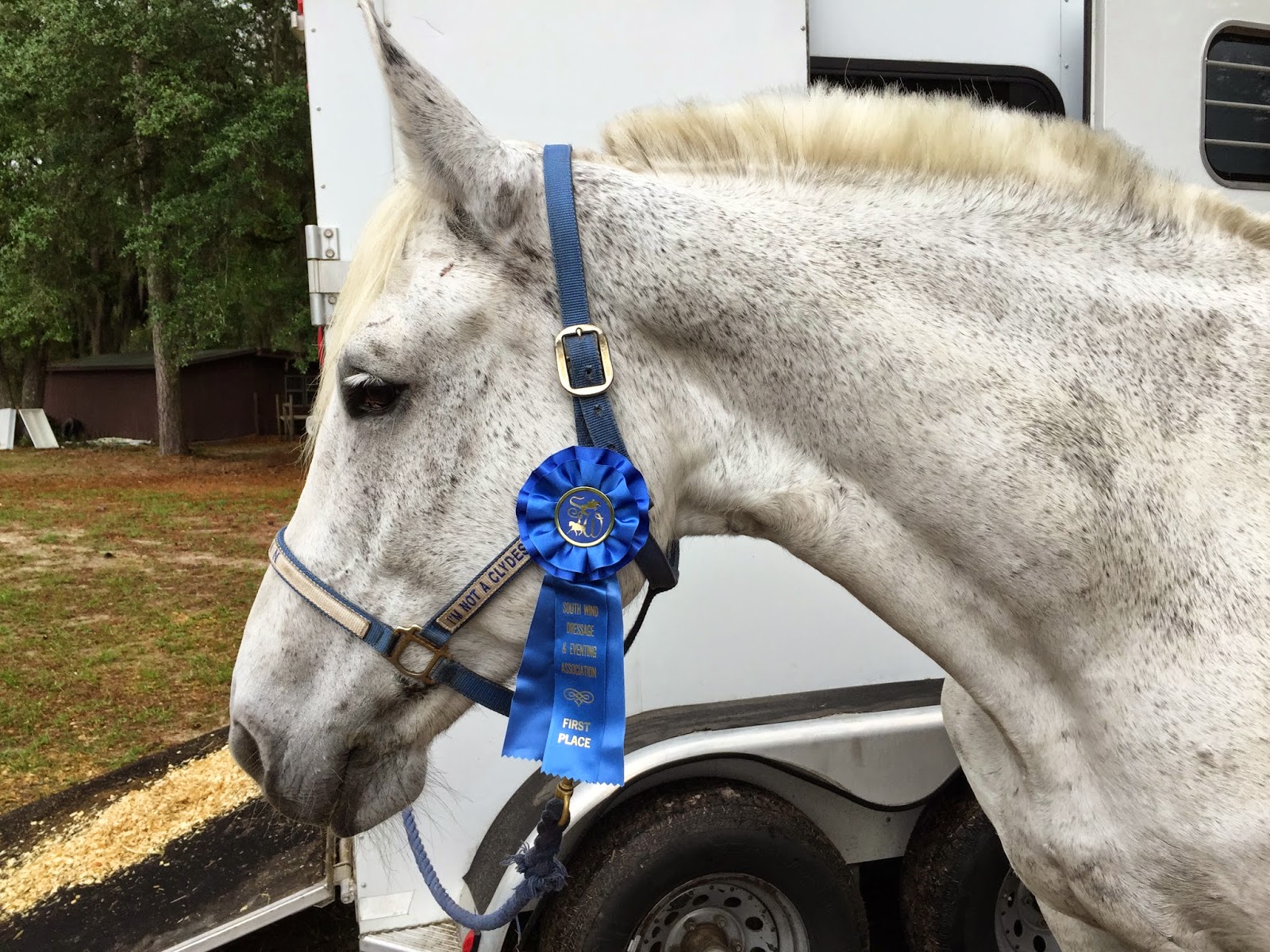 Last Saturday Klein and I competed at Training level at a combined training show (USEA Training Level dressage and 3'3" stadium).  The weather had been showing an 80% chance of rain all week for Saturday but the show was still on so, we went.  It started raining lightly as soon as I got there, then about 45 mins afterward it started pouring and I thought for sure I was about to get a show credit.  I didn't even unload Klein.

The organizers were watching the radar and were convinced the rain would stop and pass, or at least let up enough to continue.  They were right, it let up and people started to fill the warm up ring again.  I had 45 mins until dressage so I went to go unload Klein and tack her up.

We went to the indoor first since it was still a light rain.  Klein wasn't really too into the indoor.  Usually they don't bother her but this was a place she has never been and there was a lot going on.  She just wanted to be a horse and check everything out.  I knew we'd be better off just going outside, it wasn't raining that hard anyway.

She warmed up ok.  Nothing super awesome, but she was listening, until we went into the dressage ring.  She just seemed to be running from something through the majority of the test.  She wasn't my normal Klein mare.  We still got a 32.86, which I'm completely happy with, and even better, we got 7's on our lengthenings!  We have struggled with those, so a 7 was a small victory! 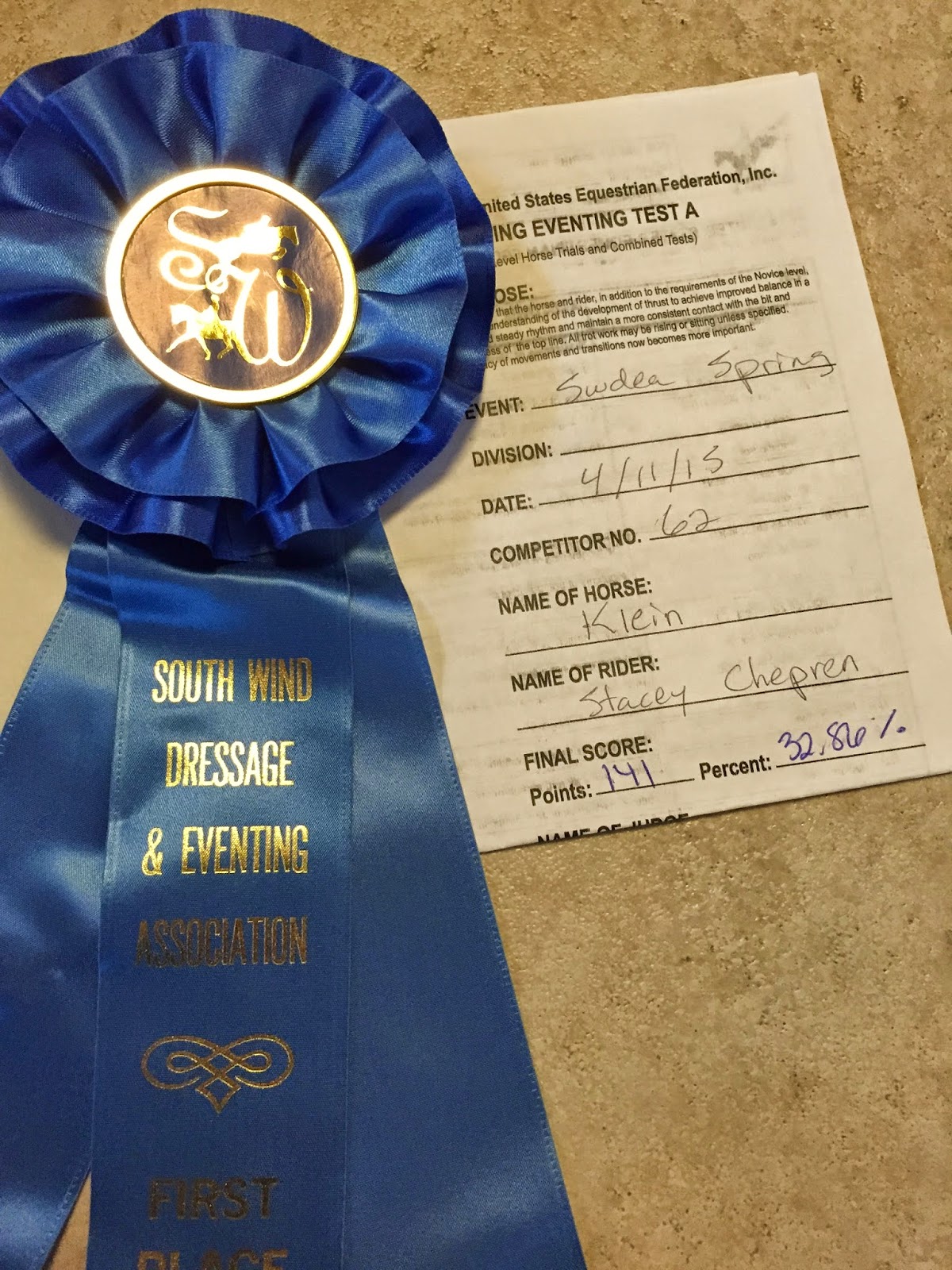 The rain finally completely stopped and we warmed up for stadium.  I warmed up early in case it started pouring we would be ready to get in and get the hell out.  Her warm up wasn't the greatest for stadium either.  Even my friend commented she was just kind of out there going through the motions.  She totally was.  She had energy but wasn't as responsive as she usually is.  Which is strange because she was great last week schooling 3' and 3'3". 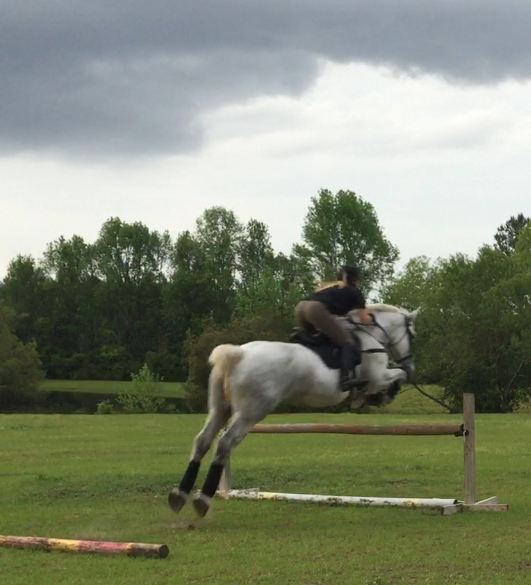 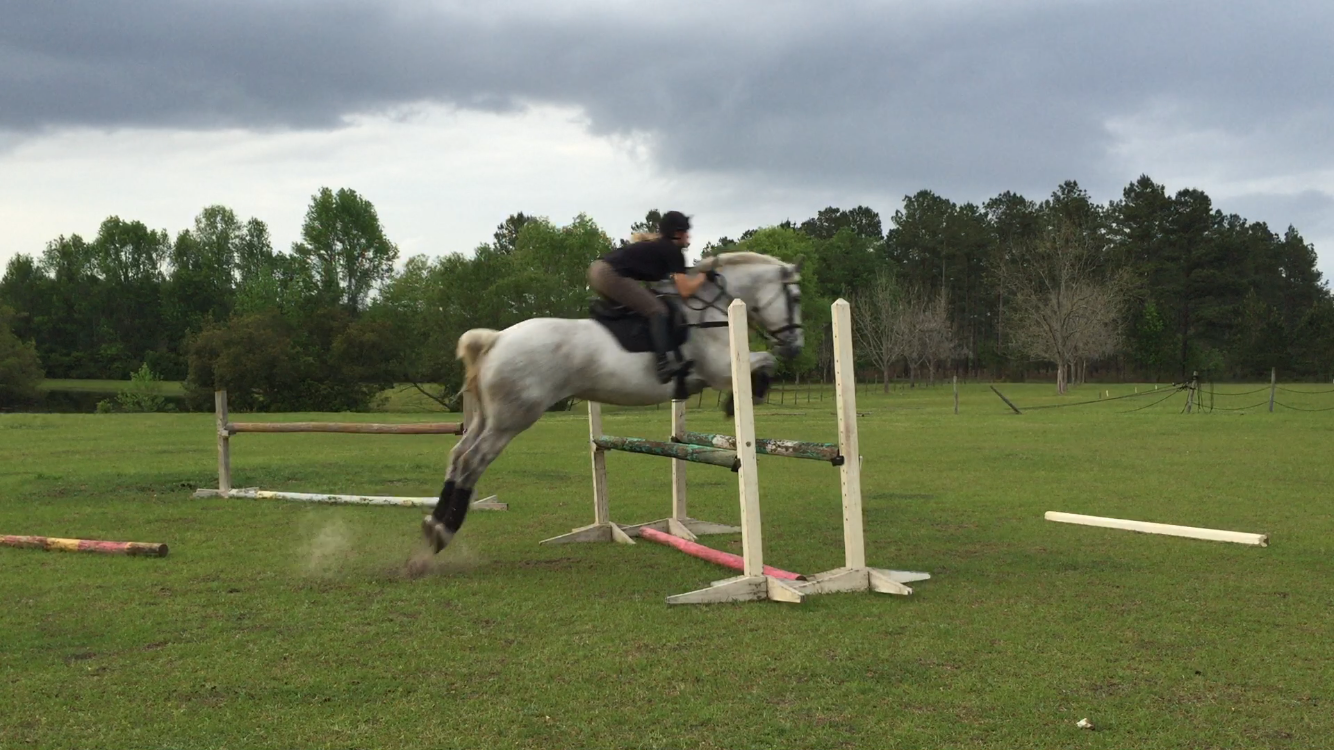 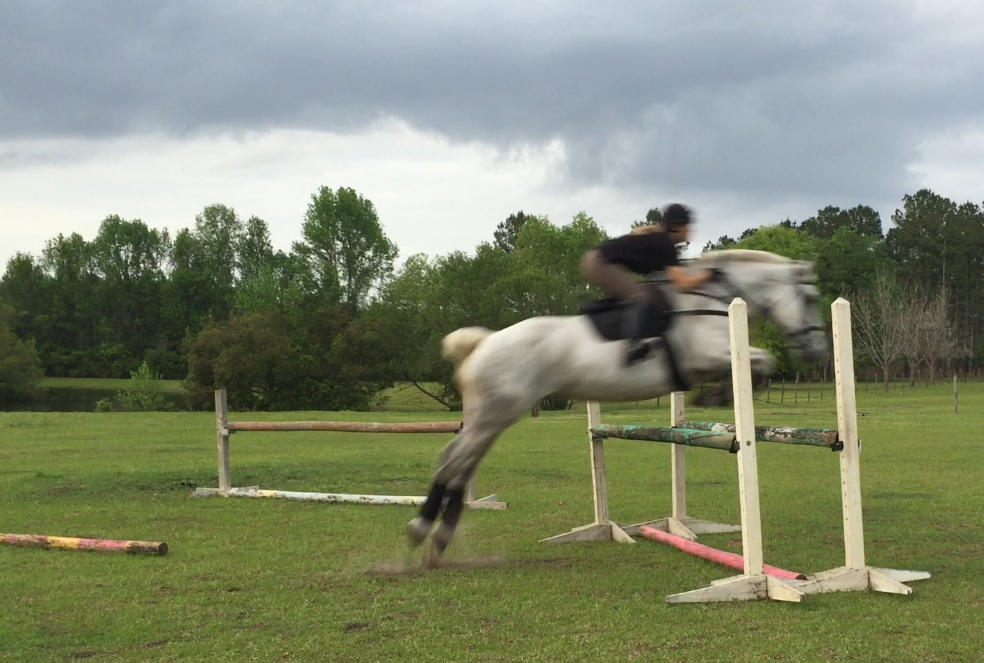 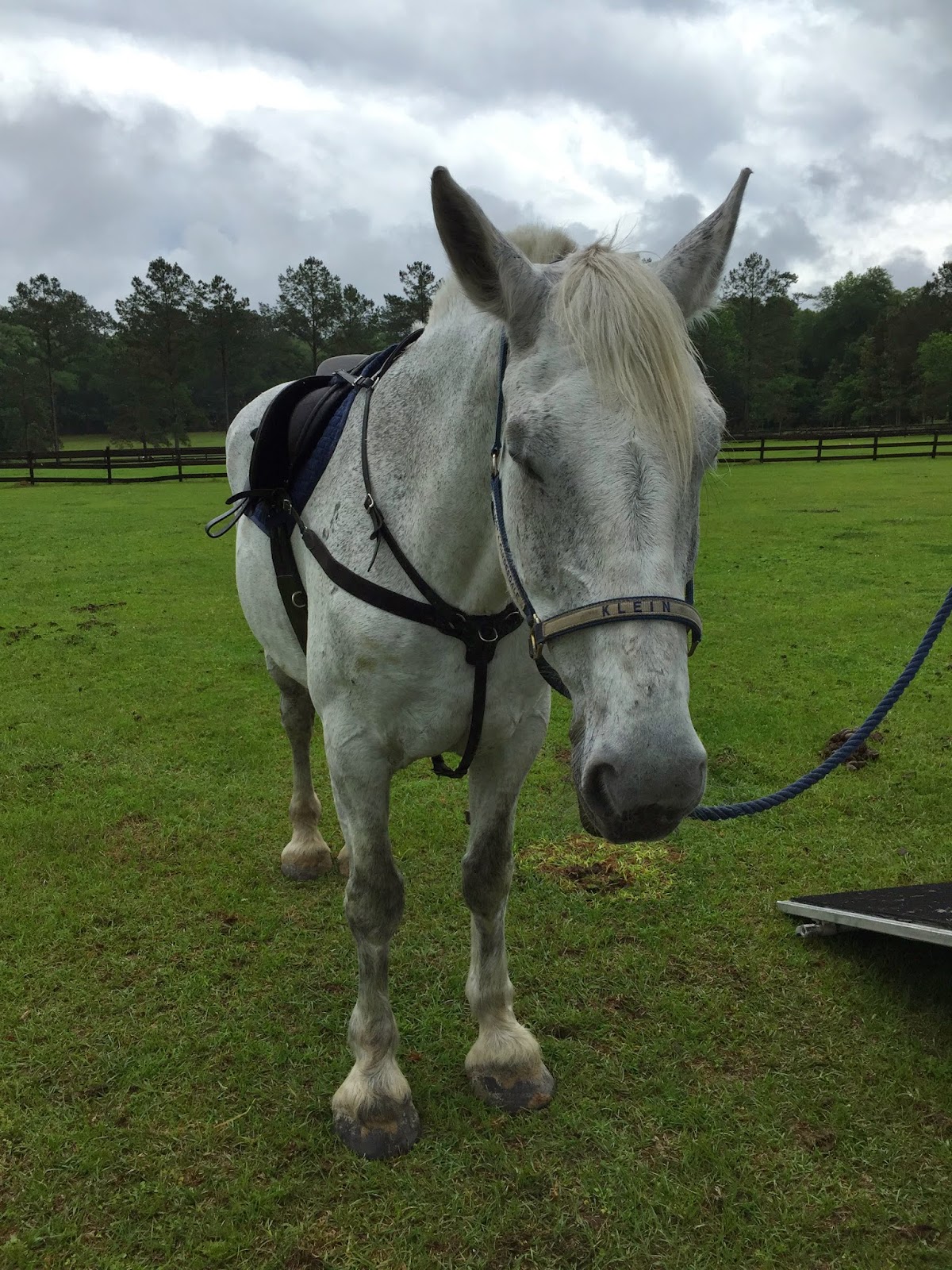 Getting tacked up for stadium aka nap time.

Our stadium round was completely subpar for us.  I don't know where my Klein mare went from last week.  This is totally not her to be like this at a show.  I'm not sure if she is getting bored or her summer itchiness is bothering her.

Also, I really don't have any pics because the Other Half couldn't go with me this time.

Klein has had a steroid shot and is currently on an antihistamine, along with SmartPak Bug Off Ultra (which we have never tried before).  I just started the Bug Off Ultra last Friday.  I have tried just about every feed through, prescription, over the counter, topical, injection, steroid, antihistamine, and all natural product that is out there. So, why not try one more?  I also ordered her a fake tail, it should be here sometime within the next two weeks.  She seems more comfortable this week.  I haven't seen her itching her mane on anything.  Normally as soon as I feed her dinner she goes and uses a tree as a scratching post, or gets down and rolls and rubs her belly to itch it.  She's not doing that this week.  She still will roll in the sand but she doesn't stay down and itch her belly.  Her antihistamine always seems to make a difference so I think that has played a role, but maybe this Bug Off Ultra was the extra kick she needed for the bugs to leave her alone.  Life sucks in the summer being grey and having a docked tail. 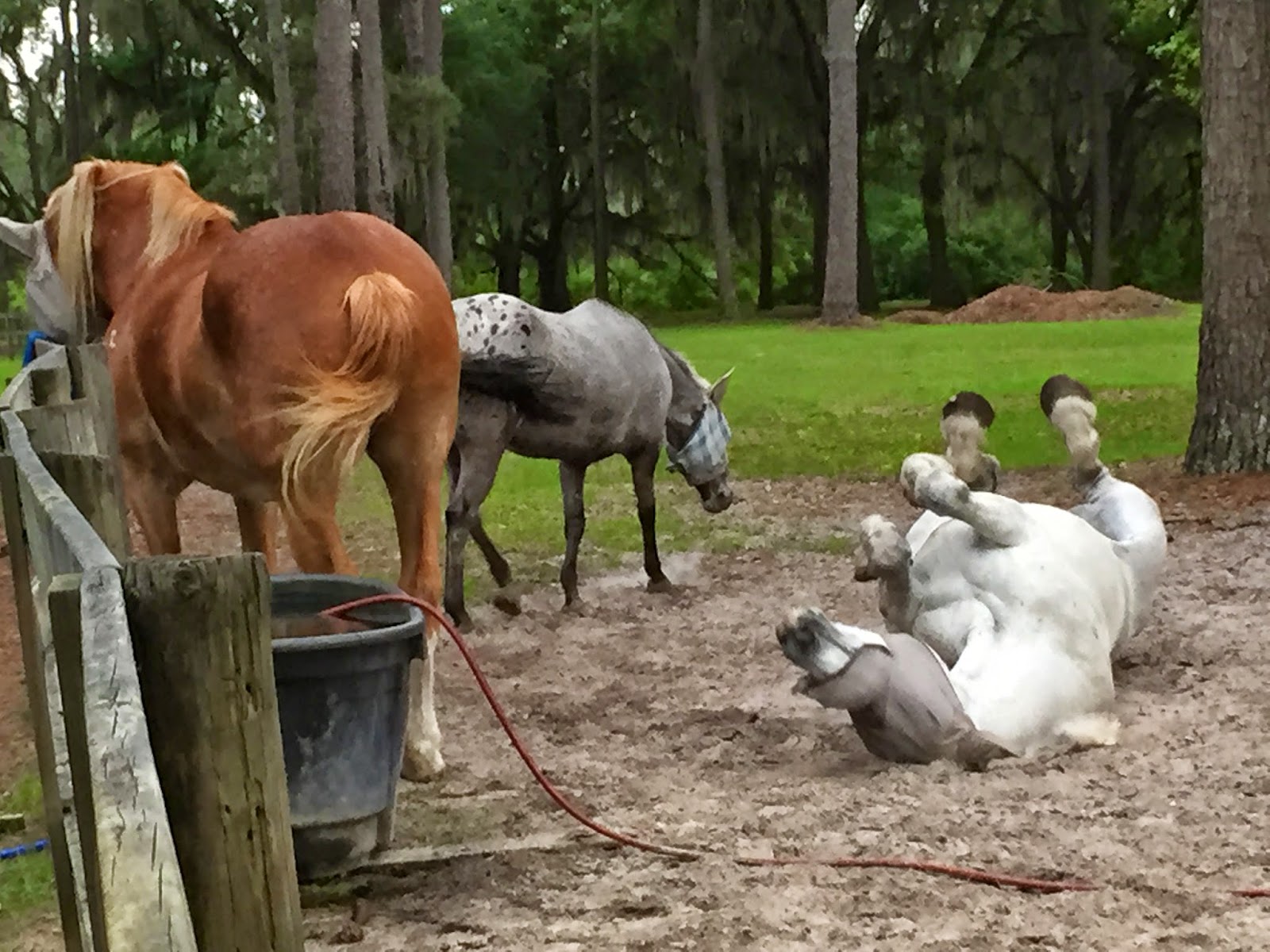 Rolling around after dinner.  She rolls in the sand, then trots off back to her run in.

We also have been lacking in the gallop department lately.  That might have a part in it too.  I mix up her routine all the time between jumping, dressage, and hacks because I don't believe in keeping them in an arena every work out.  We have done some sprint work but it's been a couple weeks and I didn't realize that.

Still, there is no need to show her in the summer when the bugs bother the hell out of her.  She'd rather be standing in her run in where they don't bother her.  Summer break from shows has started for her after this Saturday.  Gallops are in her near future, long, free gallops and hacks to different places.  We'll still keep working on jumping, via lots of gymnastics, and working on our dressage.

It's time for Mochi's to shine for a little bit.  She has been doing so great lately, I'm pretty excited for the near future with her.
Posted by The Jumping Percheron at 10:27 PM