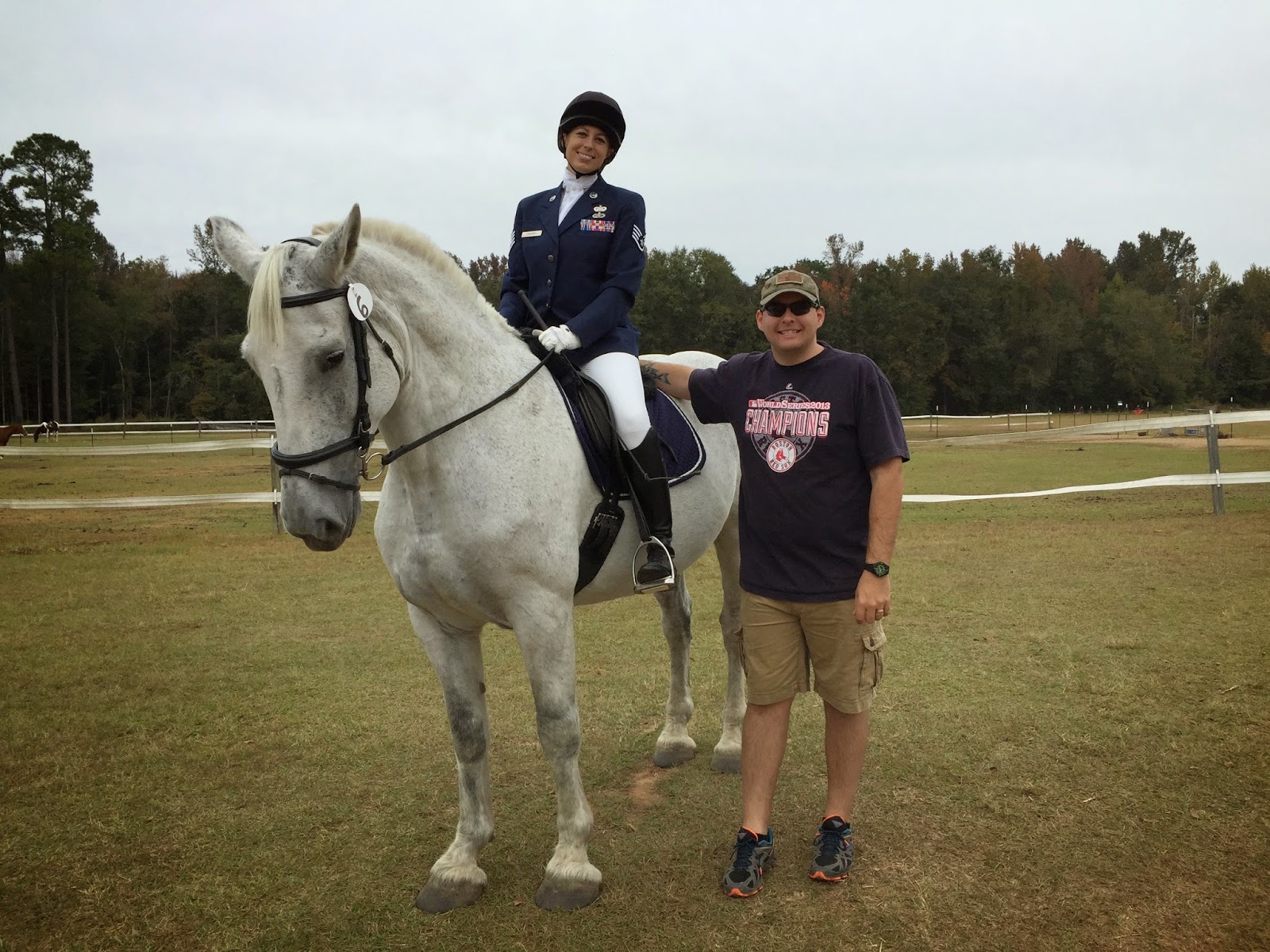 Our show went well, except for some rider error on my part.  I feel like I let Klein down but I really couldn't be happier with how she performed.  We had the best dressage warm up we have ever had and she was immediately in beast mode during our jumper warm up. 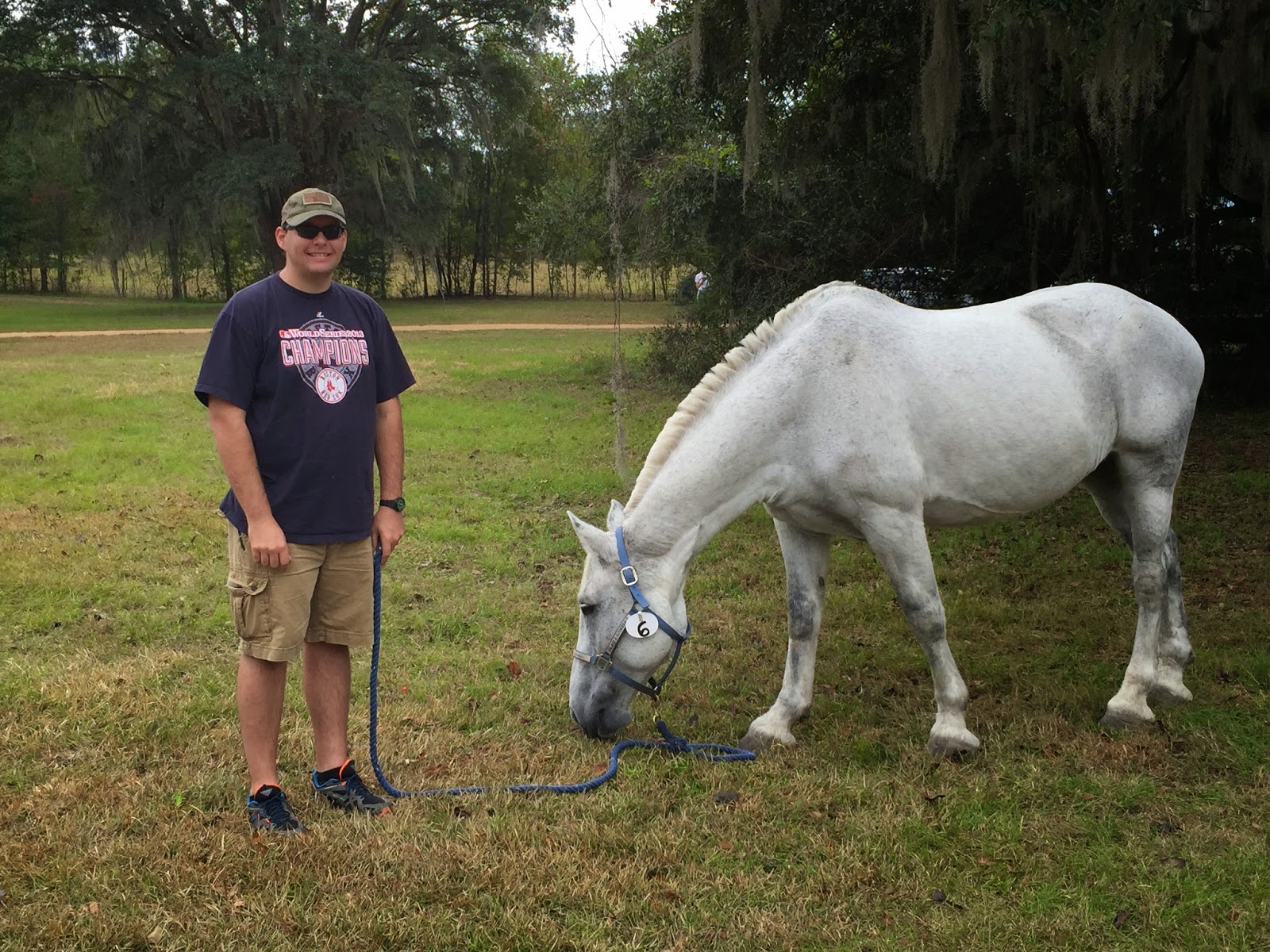 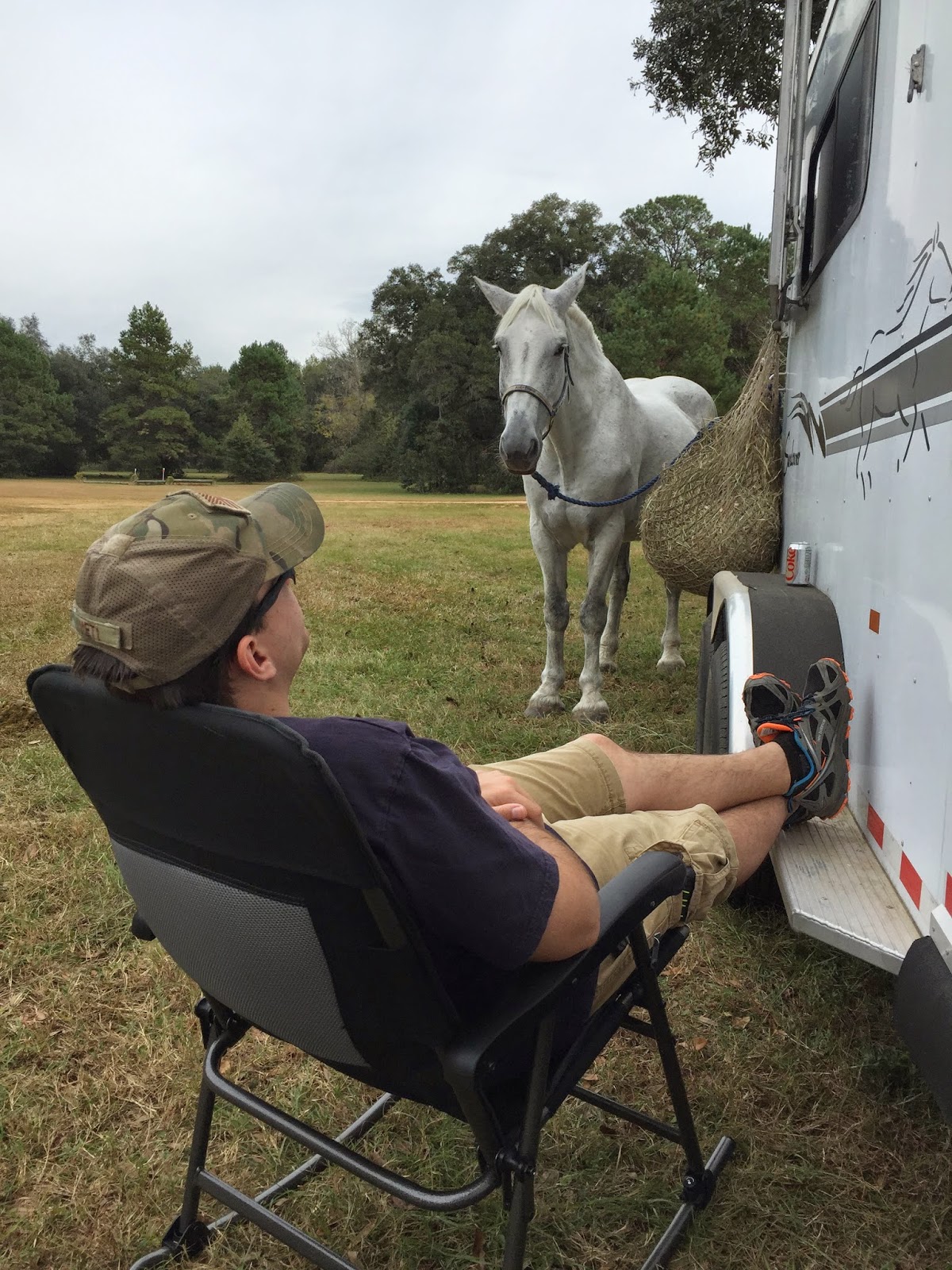 After sharing some Doritos together, they were going to share nap time too.

I really didn't think that some of the things we learned in our dressage lesson last week would sink in just yet being as they aren't quite habit yet.  But something hit home with the two of us because we had it together.  I did feel like some of her departures were a little delayed so I had the Other Half hand me my dressage whip.  True to form just having it in my hand made the delay disappear.  Normally she tends to run from the whip a little bit.  At the last show I thought I made a bit of a mistake by taking it in with me for one of our tests.  Yesterday I really felt like, for the first time ever, she was settled with it in my hand.  I took it in for my test and I never felt like she was tense or running from it.  So that's a small victory. 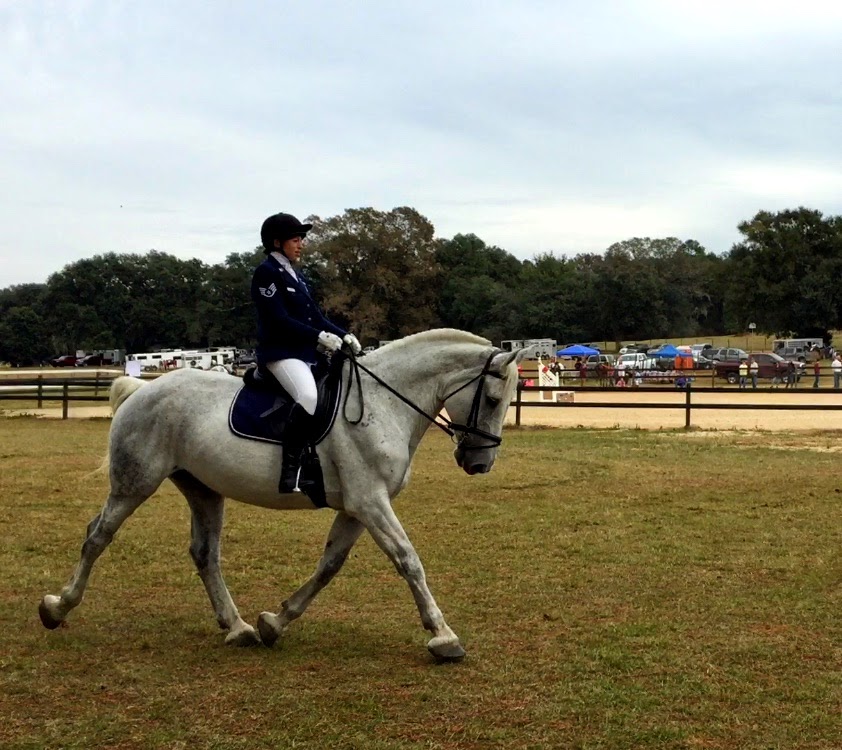 I seriously can't even...  She was ready to get down to business.

What didn't turn out as I planned is that for the first time in almost four years she picked up the wrong lead during a test.  She only does what I tell her to do so it's not her, I was off in how I asked through my balance or timing of the aid for some reason, who knows.  She is good with her counter canter and never breaks for it, can hold it for as long as I ask her to and balance in it, and that bit me in the ass yesterday.  I didn't correct the lead when I should have and we lost some basic marks for it.  Other than that Klein went the best she ever has.  So unfortunately we came out with a 45.1 which after adding back the marks we lost with modest scores would have most likely put us around a 35.  So, there goes my baseline from the R judge.  But guess what?  We show in front of an R judge next month. 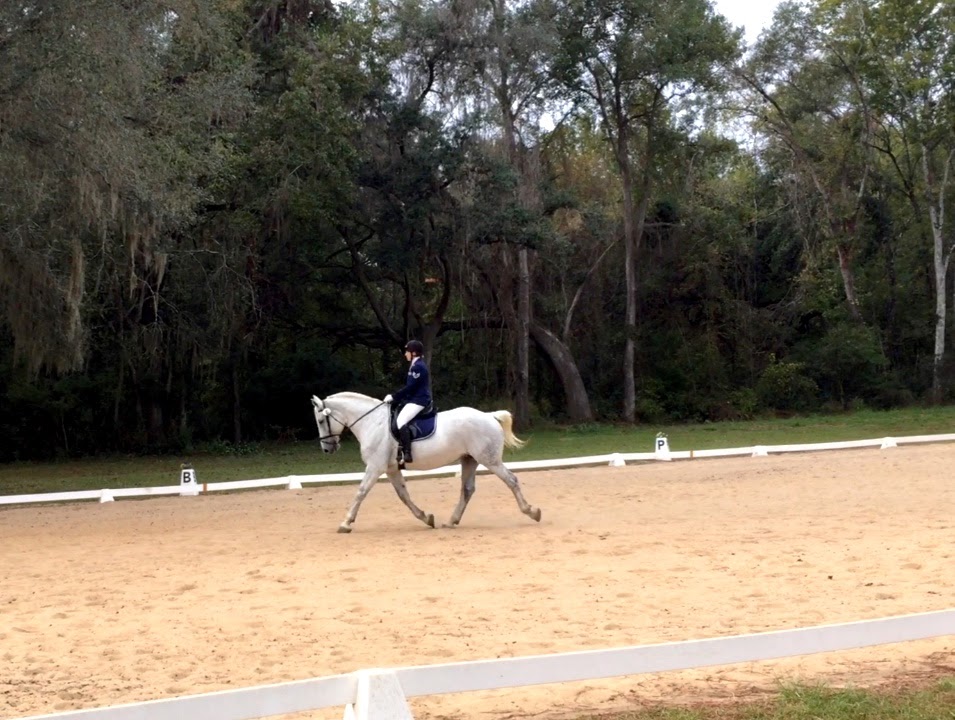 Lengthening across the diagonal. 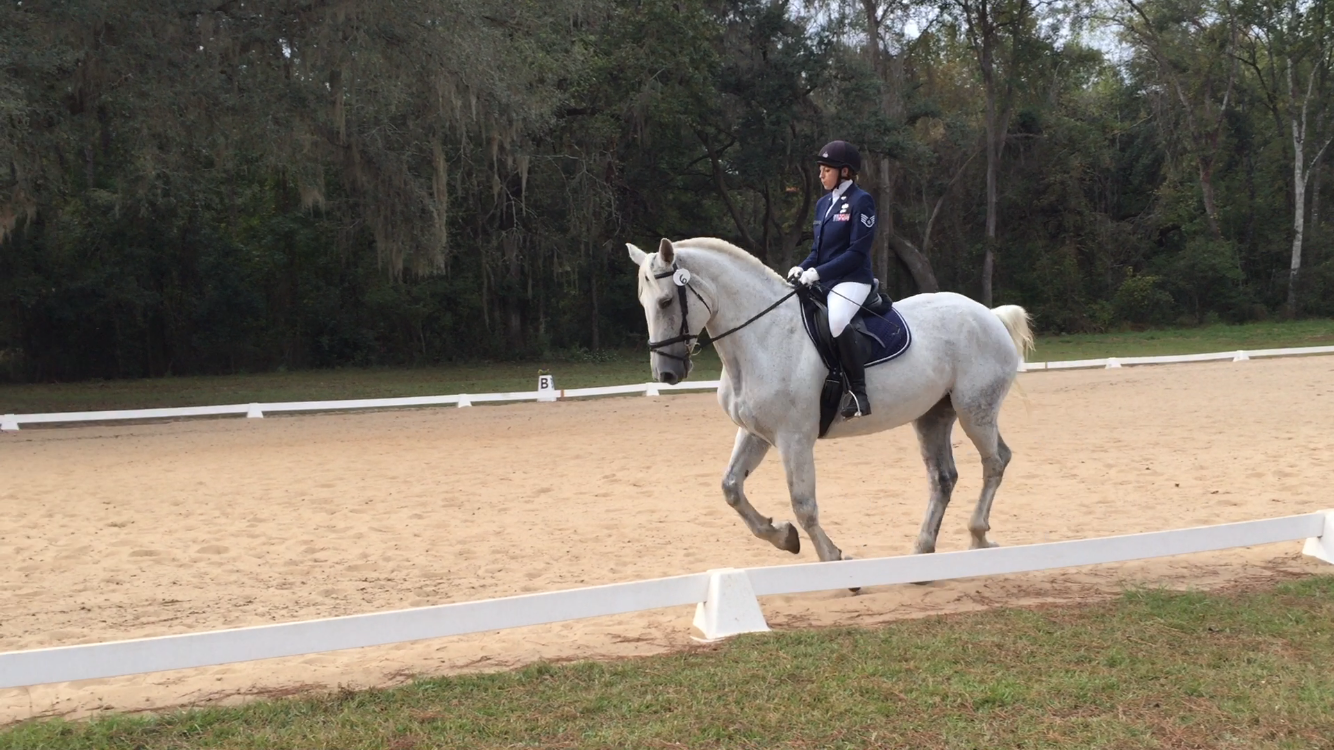 Another thing...I have looked up in either USEF or USDF rules (I can't remember which one exactly, it was a while ago) about saluting during a dressage test while in a military uniform.  A military salute is authorized for those in military uniform.  I have done it at recognized USEA shows with no issues.  I wore my service coat yesterday and I saluted the judge with a military salute.  I could see her face twist immediately and she actually wrote a comment on my test to NOT do it.  Oooook.  Maybe she is just super traditional.  My service coat confuses people too.  There will usually be one person or zero that actually know what my service coat is.  I will get a billion questions like "Oh did a family member give you that?  Are you ROTC?  Where did you get that, it looks great?!"  When I say I'm IN the Air Force and it's MY personal uniform they usually give me a confused look.  A lot of people don't realize you can be in the military and have horses.  Most of them think when I say that, I mean I WAS in.  Then I have to tell them, no I've been in for eight years, I'm still in, my horses go everywhere with me.  So the judge might have just genuinely been confused.

Anyway, just check this girl OUT!  This was a clip from our warm up.  This alone and I was like "Ok, I'm done, we can go home now, how can she top that trot?"


We had a lot of admirers come by to ask about her and she was showered with many kind compliments.  Some people said that was their first dressage test they have ever watched a Percheron perform and they had no idea they were capable of such a lovely test (because it was lovely aside from my mistake).  I was so proud of her, and she knew it.  She knew she was too, I can just tell by her mannerisms by now.  After seven years together, starting her, and doing all of her training by myself, I know this girl.  She was enjoying herself, having fun, and giving her best.

Klein warmed up ready to go for stadium.  Pretty funny, a car full of people was driving right by the warm up one of the times we were about to jump the 3'3" vertical and every single person was glued to the windows to watch.

The course was tight, which I expected knowing who designed it.  We came expecting a road course of a stadium.  We work on things like that at home too, rollbacks, in and outs, tight turns, etc... 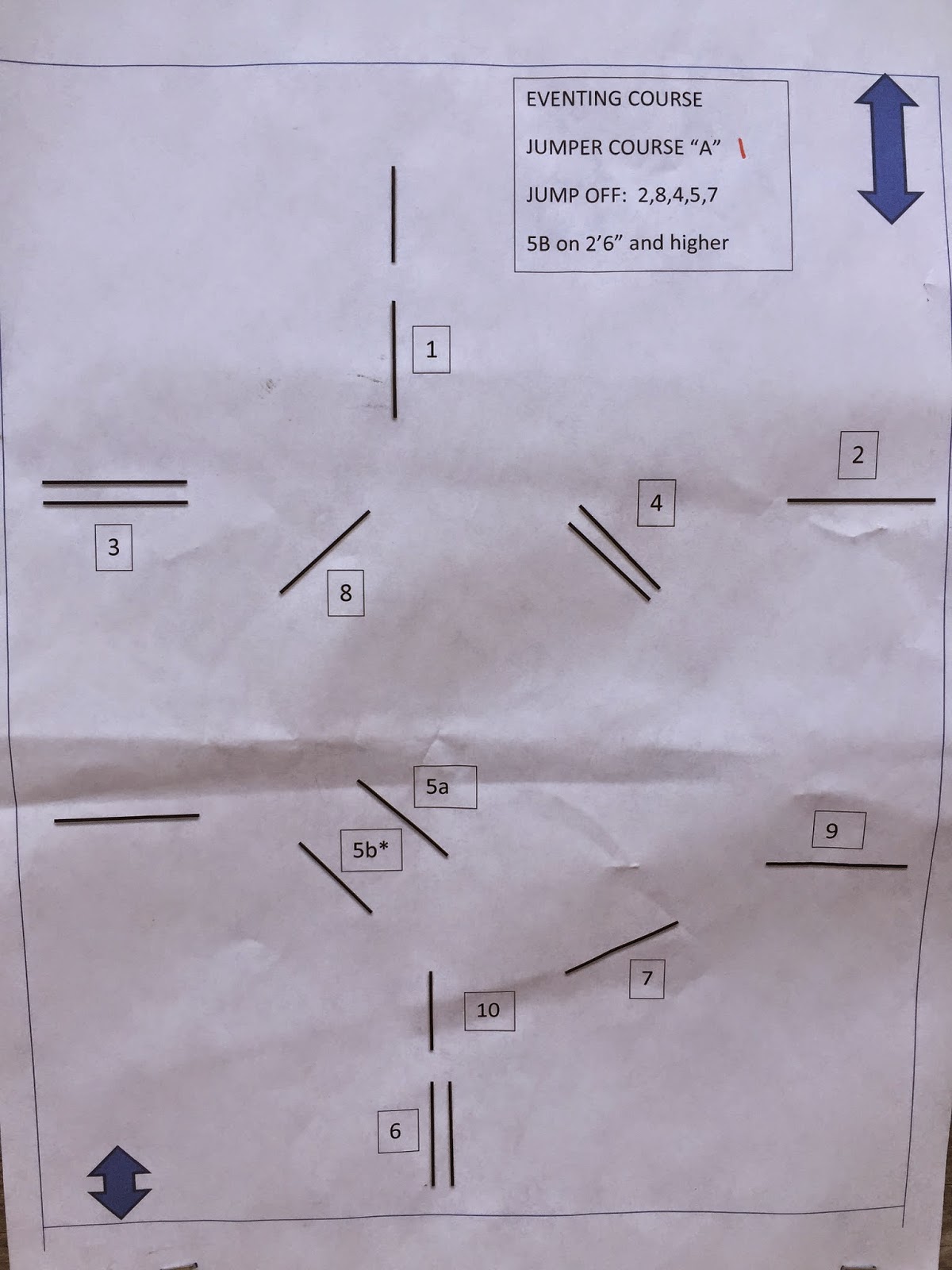 Klein was game for the challenge as usual.  I tried to use the corners as much as I could to give her as much runway as possible.  Unfortunately I let her jump a little left coming downhill over 5b.  I didn't give her enough room and cut the corner a little bit from 5b to 6 and got indecisive.  I usually can see a distance but I didn't see that one and for the first time ever in a show, she stopped.  It really caught me off guard because she is not a stopper, but that was 110% my fault.  I got her into a questionable spot and was indecisive of where I wanted her to leave from.  I got what I deserved.  I let her down.  If I would ride correctly, she would have went correctly.

I was really caught off guard by that because that's not something I usually have in my mental contingency plan.  It will be from now on, just in case!  I did a half assed circle and had to adjust even that and come around where she could have the most room and of course she popped right over it.  She wasn't looking at that jump.  She was listening to me.  I guess we will tighten up some of our turns at home too so I can give Klein a more proficient ride.  The Other Half said he could hear people gasping as they watched us around the rest of the course before my bauble.  People were seriously impressed with her. 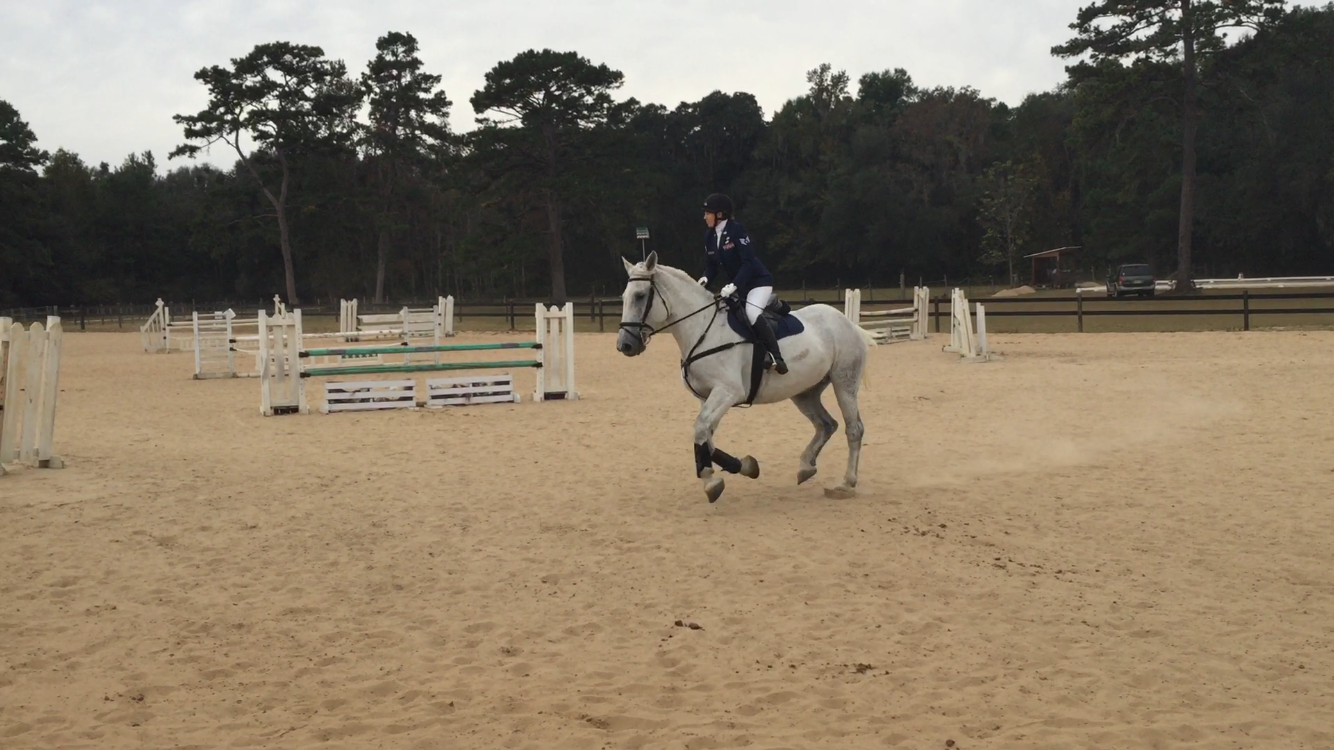 Coming over 5b to the left when it should have been the right, oops. 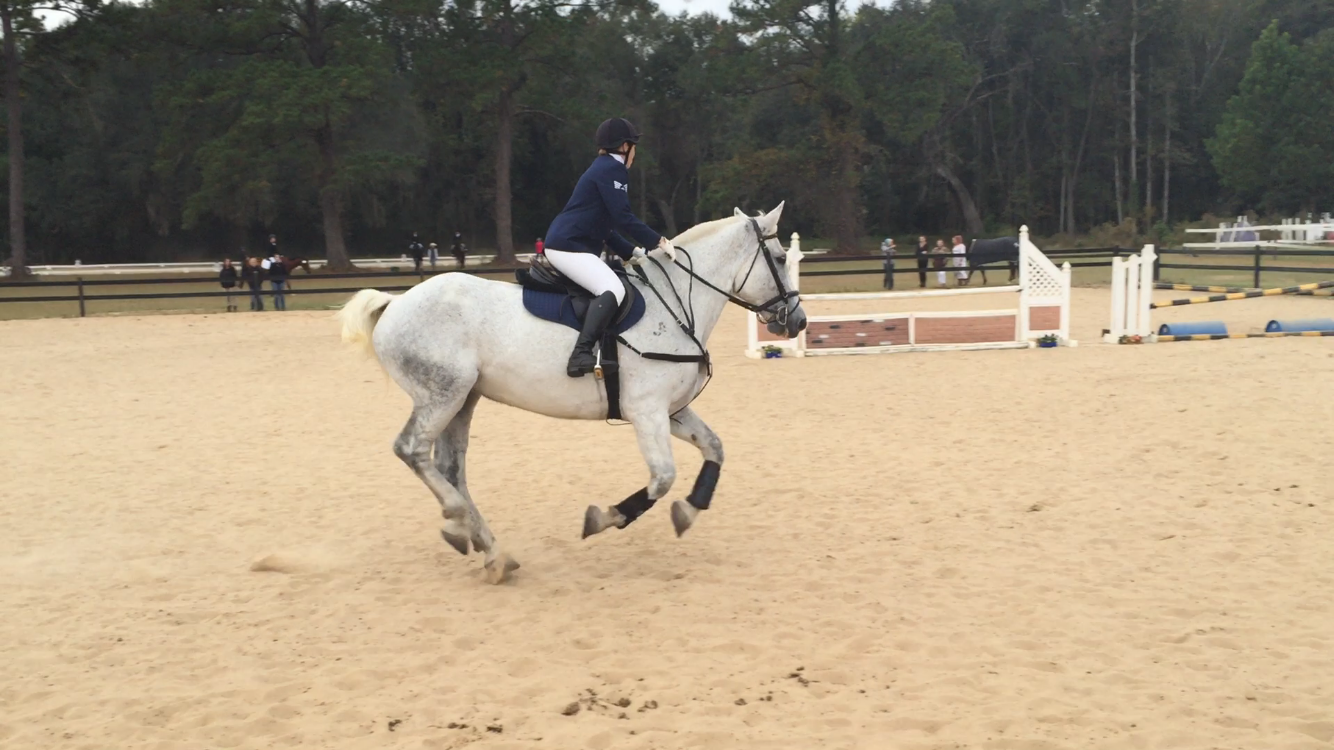 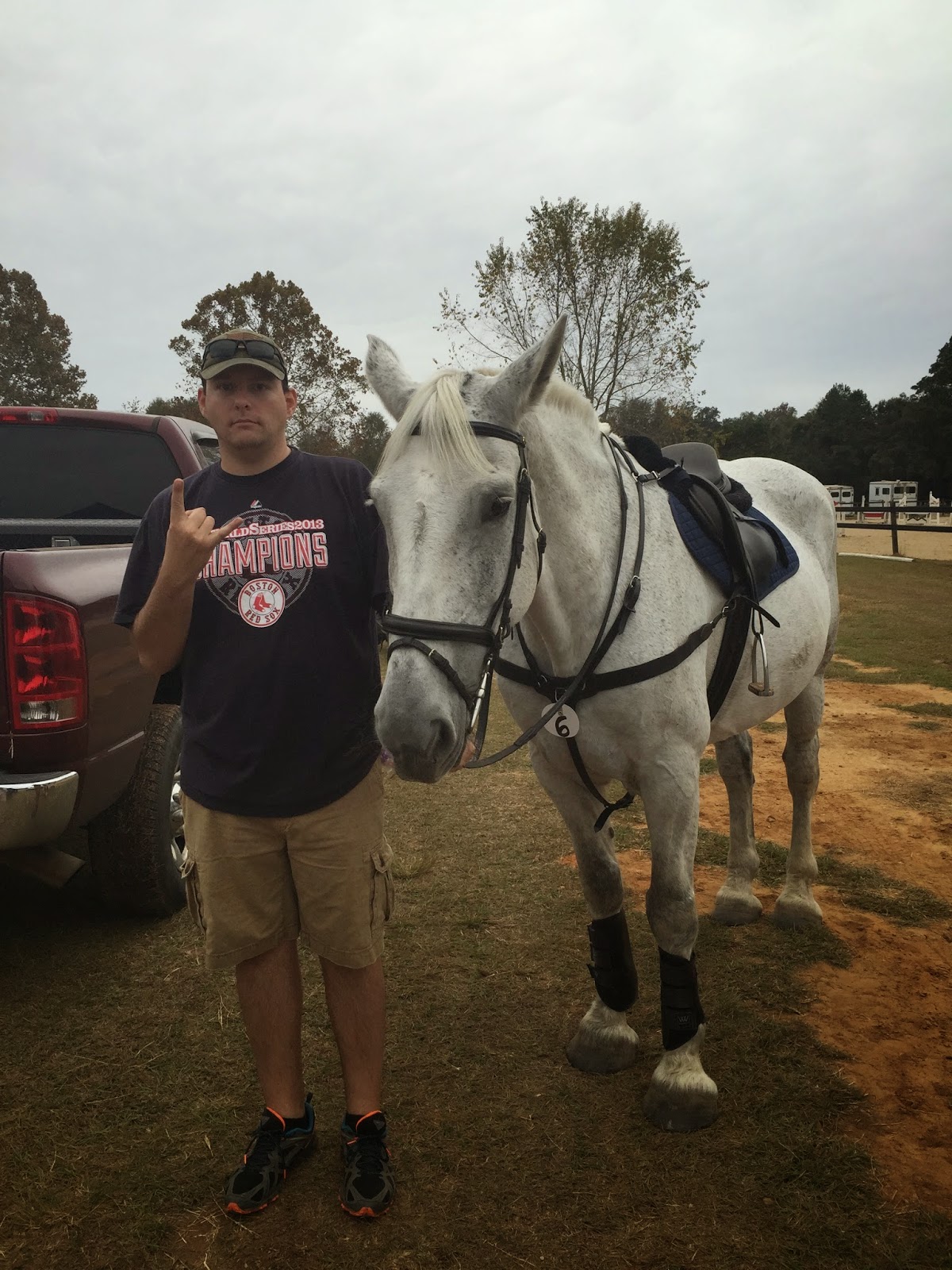 Afterward  I made sure to treat her like she just won Rolex and tell her what a perfect pony she is and give her extra granola bars and belly scratches.  The rider wasn't all there for the show yesterday but damn, my horse sure was.  I started to feel pretty disappointing in my mistakes but the Other Half reminded me that I said myself after the dressage warm up I'd be happy with loading up and going home right then and forgetting about everything else.  He was right.  My horse was AWESOME.  Sometimes I am hard on myself.  I will critique my every step.  Even with CrossFit, I had to learn to let go of some of that OCD behavior.  I tend to look at the small picture and not the BIG picture.  Instead of thinking "wtf is my problem, I know better than that, I let my horse down, how could I do that?" I realized "Wow, seriously?  It's a fun local show that doesn't count for anything, you didn't pay $600 plus to attend, Klein knows how wonderful she was, you had minor mistakes that could have been much worse and atleast you know it's you, not your horse, shit happens to everyone at some point, you know this."  Thanks to the Other Half for helping me to see that.  I immediately stopped trying to rule myself with an iron fist and appreciated a fun day with my husband and my Heart Horse at a show with friends, beautiful weather, my horse going nicely, and went back to treating Klein like she just won the Powerball lottery.  Anyone that would be disappointed with that is an ahole.

After we got back to the barn, got Klein unloaded and turned out, the trailer unhooked, the Other Half took me out to an awesome vegetarian dinner complete with a big, tasty margarita.  Winning. 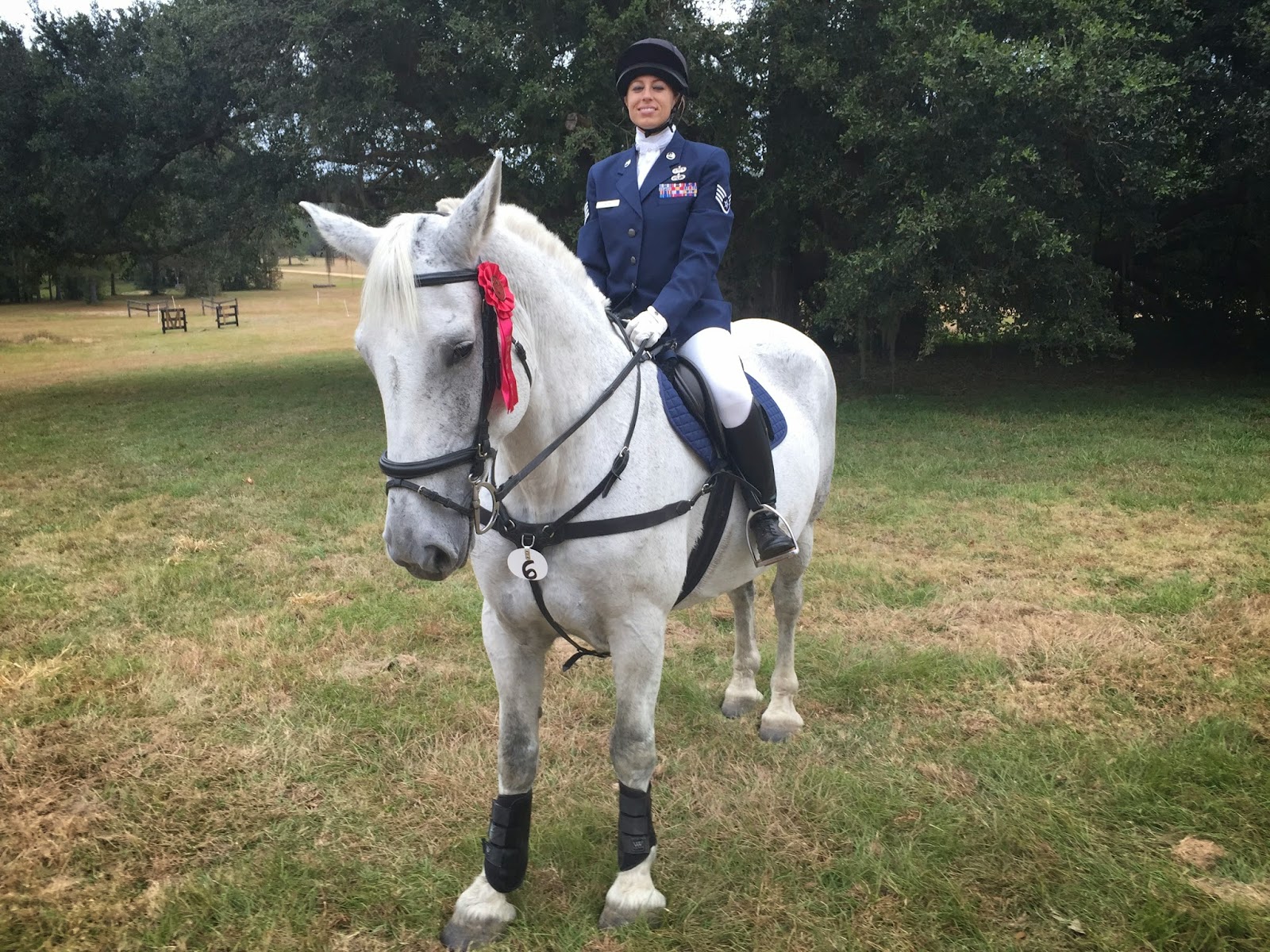 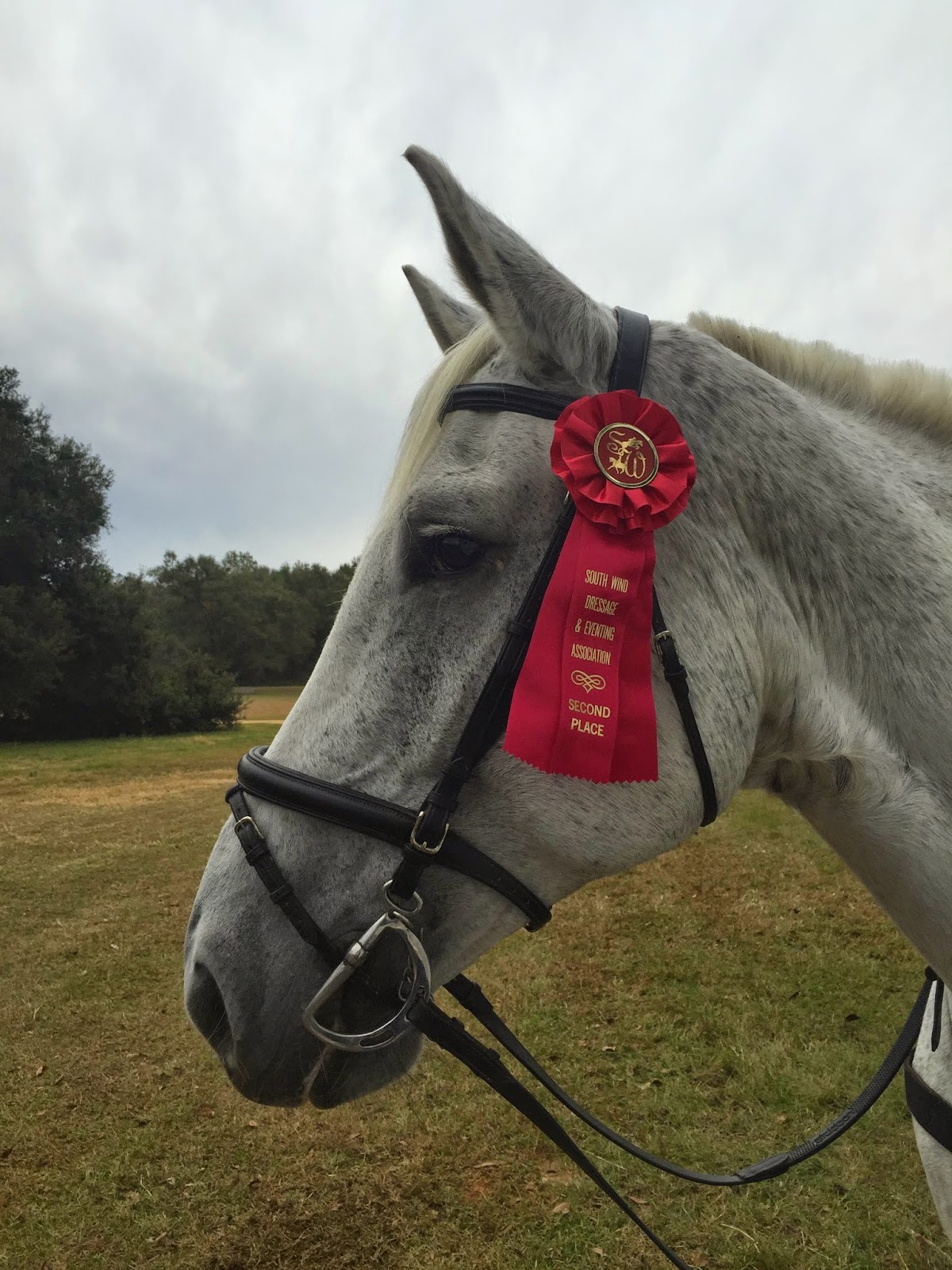 Posted by The Jumping Percheron at 9:35 PM