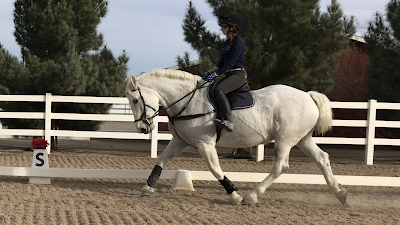 First, the girls are doing GREAT.  I owe everyone a little back story on what poor Klein went through right before Super B's colic. 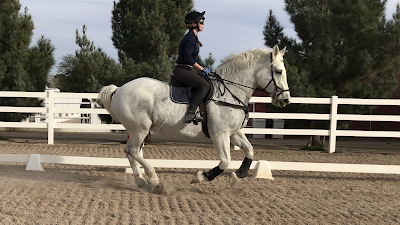 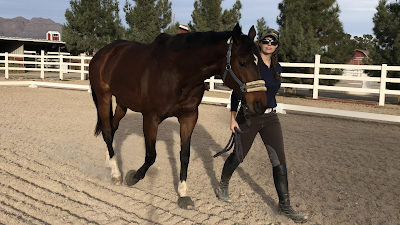 Klein mare had a little vacation this summer like she usually does.  However, during that time she had a severe reaction to Habronema Muscae.  It's a reaction to a bot fly of all things, which is a mystery because none were ever found at our barn.  The vet told us they can come from a few miles radius so they HAD to have come from another property, ours is kept absolutely spotless and everyone is UTD on EVERYTHING.  We are in an area with a lot of barns so there are multiple properties within that few mile radius.  Though none appear to be slacking on upkeep or property maintenance, there is really no way to pinpoint where it started, we could only treat it and move on.

I had a handle on it at first when these little sores showed up, the abbreviated version is that I had them under control and then they started to get worse so I took her into the vet where they debrided the wounds and kept her a few days to keep an eye on her.  She has ALWAYS been the most delicate flower when it comes to things like this.  She STILL gets an allergy shot every 30 days in the hotter months.  She has had it every summer over the past 10 years in Hawaii, New Mexico, Georgia, New Jersey, and now Vegas.  That's just a Klein mare thing that I manage just fine with the monthly injection.

I was hoping that would help get rid of this thing, before I knew it was habronema.  Thankfully about 45 seconds after I unloaded her at the vet, our vet goes "OH, we can fix this!!!!"  I was SO relieved she knew what it was right away!  They immediately got to work on debriding the sores and showing me the habronemas that I NEVER would have found.  I knew something was beyond the control of the allergy shot and that it was something different than her usual.

Oddly, remember seeing Bot fly eggs on horses in pastures in New Jersey but NEVER at our farm.  And the horses at the properties that I did see them at, never had a reaction.  It's just one of those things where one horse may react, and another never will.  Well, leave it to Klein if there is a possibility of a horse reacting to something. 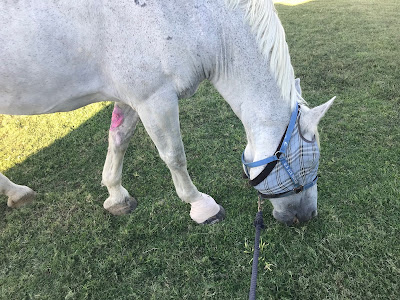 You can see the ointment on her left chestnut here.  She essentially ripped that chestnut off.

After a short stay at the vet Klein was looking much better and was responding well with Dex, Hydroxyzine, and a special ointment they mix at the vet.  Unfortunately, about a week at home and she started getting worse where the sores were bothering her and I couldn't stop her from messing with them, so, back to the vet we went.  It was determined she needed to stay on the Dex.  We had started a taper that week and she wasn't ready for that.  Upping the Dex again put the brakes on her messing with her sores almost immediately. 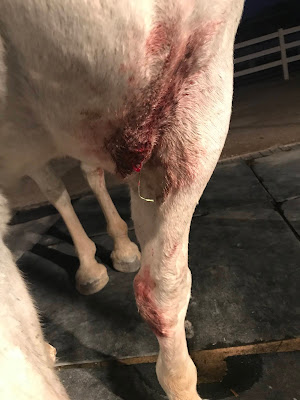 This was AFTER she came home from the first stay.  She was doing great, not messing with ANYTHING, then one evening I got to the barn and found this.  I saw her that morning, she was NOT like that.  I texted the vet immediately and took her in the next morning.

I will say this, for being a delicate flower, at least she has ALWAYS responded to Dex extremely well.  It has ALWAYS worked for her and she has never had any side effects, or any negative effect, from it at all.

It was around the first time she was in the hospital that everything happened with Wes too.  So in addition to dealing with this I had to fly back to NJ to say good-bye to Wes, this was at the end of September.  I brought Klein home the day after I got back to Vegas and she was home about a week before she went BACK to stay at the hospital for a week.  Now, did I have to leave her there a week?  No, I didn't.  Why did I?  A few reasons. 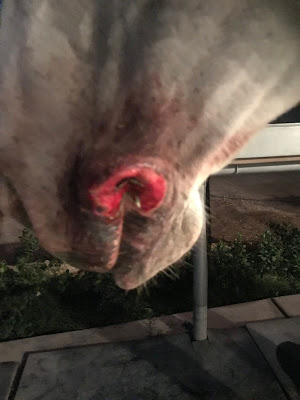 Klein is so sensitive and was honestly starting to self mutilate (see above pics) and it was absolutely killing me to see this. I wanted to let her stay a solid week for the vets to do wound management there.  I could NOT keep bandages on her.  She would rip through them.  IF she did that at the vet, they were right there and could just re-bandage instead of her waiting for me to get off work.  That could mean hours of her being able to chew on them.  That wasn't going to do her any favors.  Also, if for some reason the meds started to appear to not work, all they had to do was walk a matter of feet into their pharmacy and get something else instead of me having to make an appointment, fit her in some where and bring her in.  I'd rather her be literal STEPS away from whatever necessary to make sure she was comfortable and healing. 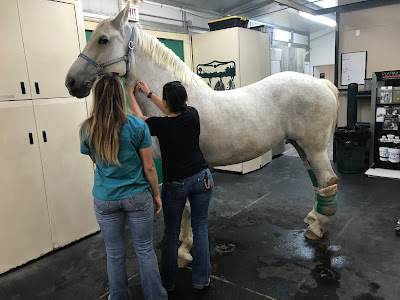 Not thrilled with me.  Dr. Moser and Dr. Clawson are basically my besties now.  See how she's pulled her bandage down here?  Well, they fixed that... 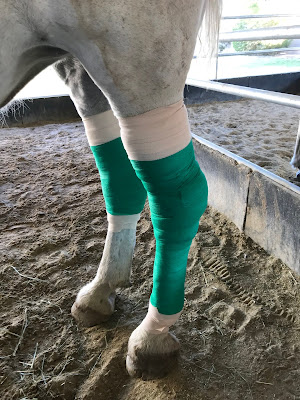 She didn't touch these.

Despite all of this, Super B is acting like she never even had a surgery, and Klein is absolutely killing it lately. 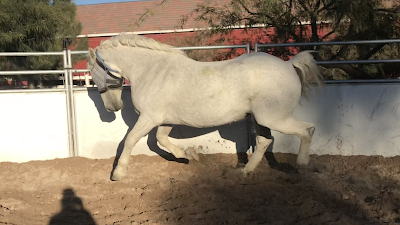 Obviously ready to go back to work. 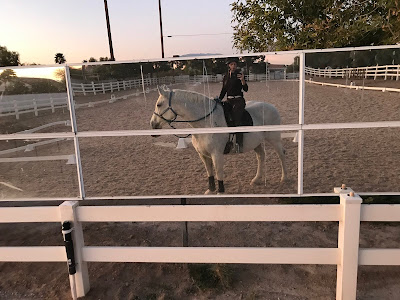 I rode with just a halter and lead rope until the left corner of her mouth was completely healed. 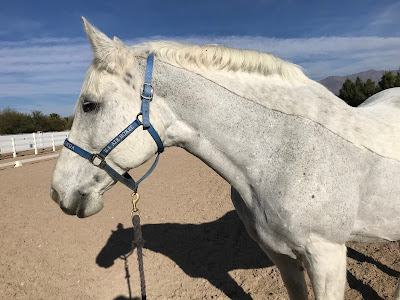 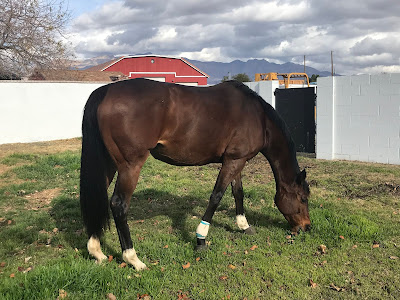 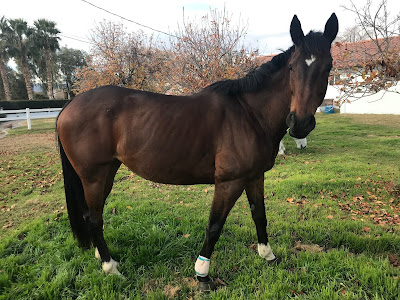 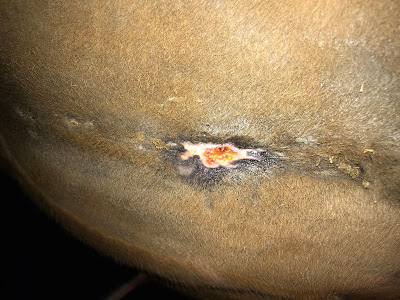 Her incision, this is actually smaller now.  It shrinks by the day.  I will post a more recent photo in the next post.

Klein has been back to work since before Super B's surgery.  They both are doing amazing.  Super B is more than ready to go back to work.  I'm keeping her busy as best I can with varying types of walks.  In about two weeks we have our appointment for a once over with our vet before I get back on her and start walking. 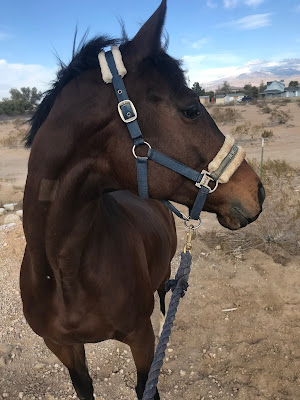 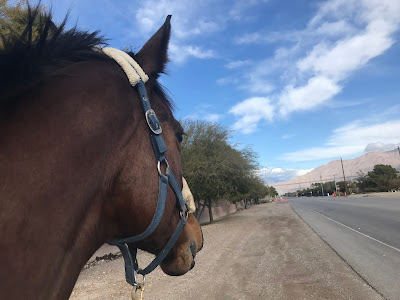 Out on one of our walks. 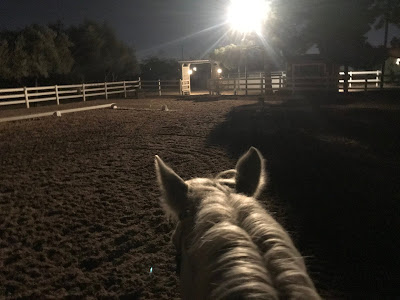 Getting back in shape. 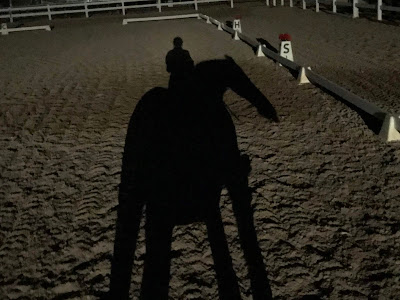 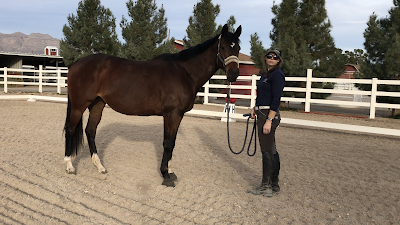 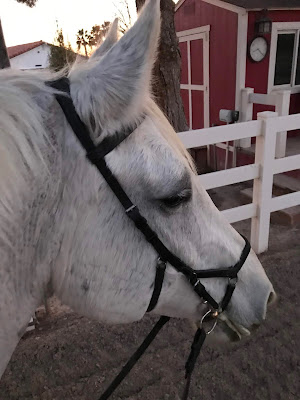 Back in a bit! 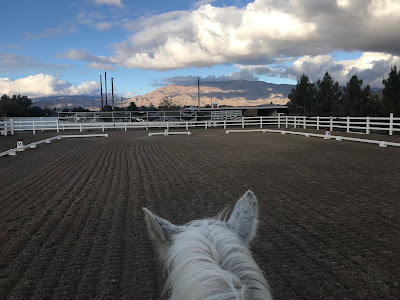 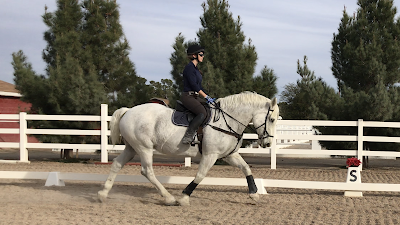 In addition to this I've been extremely busy with work and another career altering (in a positive way), amazing opportunity, along with finishing my thesis for my M.F.S.  When I say it's been a rough ride these past few months, it's no exaggeration, but, we're all good here now and we're not looking back or having pity parties.  That's not what Super Mares do, so I'm not doing it either. 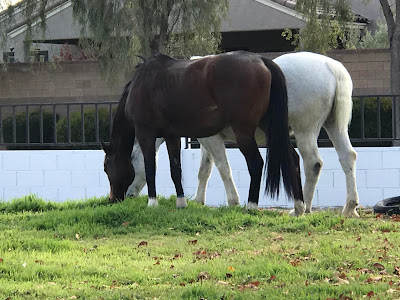 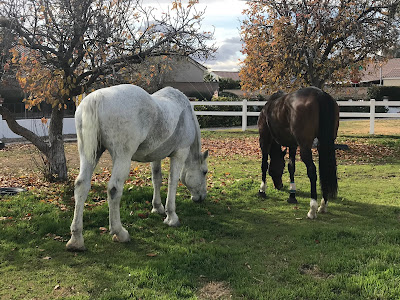 Posted by The Jumping Percheron at 12:38 AM