No Bad Endings: I Love You Wesson 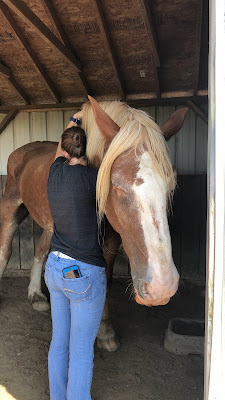 On a Wednesday in September I got a text I have been dreading.  Wes was not doing well.  You can never be prepared for that.  He was starting to have trouble with his hind end and looked neurological.  He was utd on all shots and had never had any real health issues, besides an abscess, the entire 15 years I have known him.  In all other respects he was in good health.  His feet were good, he had all his teeth, he could see and hear fine, get up and down fine, etc...  So this was extremely out of character.  He hadn't had any accidents out int he pasture as far as falling for any reason or getting kicked, it was just Mochs in with him too.

At first it sounded like a potentially acute issue but after opinions from two vets and some medical intervention, it was determined to be more than that and definitely not neurological.  The issue was in his neck and either it was a degenerative issue in his vertebrae from arthritis or a fracture (that could also be caused by arthritis).  He was to the point where he was walking in a constant half pass and was using the barn to hold himself up.  He also could only turn in one direction and his balance was off.  You can kind of see in that first picture how his hind end is out to one side.

Could we try more intervention?  Sure, but seeing him in that condition it seemed unfair to let him live like that while we tried things that we weren't even sure were going to work.  To me, that is crossing the line where you are doing it for yourself and not them.  I was also afraid he WOULD fall at some point and become seriously injured then we would be in a real emergency situation and it would be traumatic for him.

We made the decision to say goodbye.  The last thing I wanted for him was a bad ending.  He did so much for people for so long.  He had a great retirement and he deserved a peaceful ending.

It was surreal making the phone calls to set up his final vet appointment.  I got on a flight out that night to Philly.  One of my best friends that lives here went with me.  After two of my best friends asking if I should go alone and me being adamant I was fine alone I decided that if two of them suggested this completely independently of each other, maybe I should just listen for once.

When we got into Philly we went to my other best friend's house, the friend that rode with me across the country last year with Klein and Super B.  We stopped at a store to get Wes granola bars, molasses, carrots, and apples then headed to the farm.

I didn't want to stay for hours because he had already been in that condition for a few days.  At one point I was not going to fly out there because I didn't want him to wait on me but the barn owner assured me he was still mobile and eating, drinking, and generally himself besides the obvious.  My best friend that lives there also went to see him and agreed. 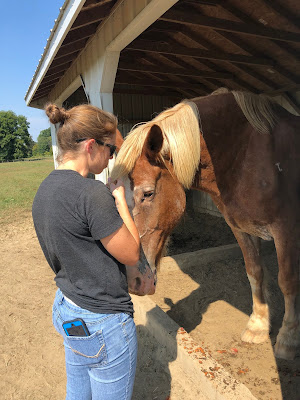 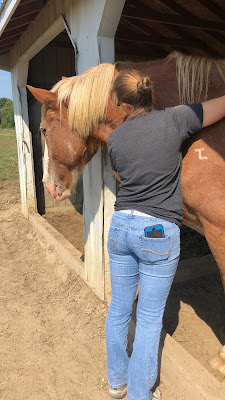 He perked up when I came around the corner of the run in.  I fed him a whole box of granola bars dipped in molasses, apples, and carrots. 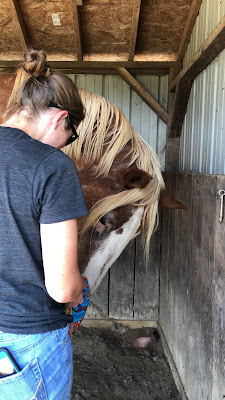 When it was time the vet came out to the field.  It was a beautiful, sunny day, and Mochs was there too.  I wasn't sure if she should be close or not.  But, if she was far he would be looking for her, and I know they need to have time with them to understand what happened afterward.  So we haltered Mochs and one of my friends just stood with her quietly.

We picked a beautiful, soft, grassy spot and the vet told me how it would go, as far as when I would need to step back, but I was there next to his head until I had to do that.  As much as it hurts, I always want them to know I'm there.  It was so surreal seeing those syringes filled with blue liquid, knowing they were about to take Wesson away from me.  I see death all the time.  I look death right in the face.  All.  The.  Time.  I physically handle death, all types of deaths, some of them being the most violent deaths you could imagine, and they are sometimes in every state of decomposition possible, from one day old to 96 years old, I see them all, and I compartmentalize, but I could not reconcile the fact that there was no turning back after that liquid was pushed.

Sometimes it's violent with horses, and Wes was so big that the vet told me again don't be surprised, just know that they are gone before they are on the ground no matter how it looks.  But, it wasn't like that.  Wes laid down so gently.  He was ready, he just seemed so relieved.  I knew I did the right thing, and as much as it still hurts, I felt relief that he was no longer in that condition and that he didn't have a bad ending.

Mochs was ok, she came and sniffed him and walked away, I am sure she knew what was near and I'm sure she was relieved because she always looked after him and now she didn't have to worry about him.  We all stayed with him for a while.  I just laid on his face and petted him.

It still hits me some days that he just isn't here anymore.  He has been around in my life for so long and to realize he's just not here anymore is so final and sudden and it still hits me like a ton of bricks some days, and I know it will be like that for a long time. 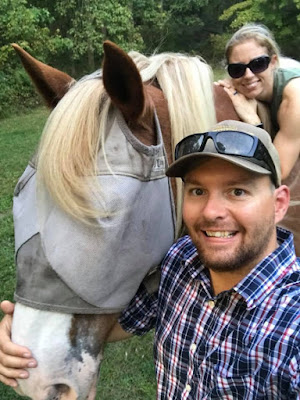 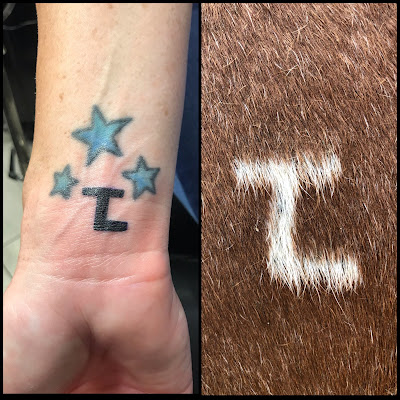 Posted by The Jumping Percheron at 3:45 PM