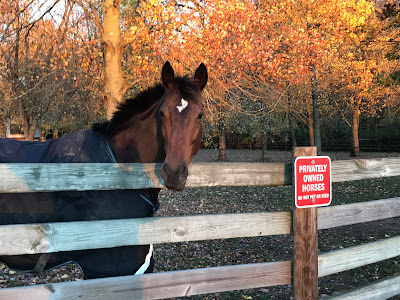 Yes, we seriously had to put several of those signs on our fence despite our property clearly being a privately owned property complete with a gate on it.  Those signs may have saved a few people from being scarred for life if they had approached that fence within our view.

I kind of look at Super B as my Fixer Upper.  It's a known fact that pretty much all racehorses come off the track with some type of issue(s).  That was one thing that kept me away from owning one, or even wanting to own one for so long.  But, we all know Super B came along and changed that.  I'm not saying I want another one either.  She is THE exception.

I know the history of my other three horses.  I know the people they came from, I know where they have been. In most cases I know or have had contact with all previous owners.  That is not the case with B.  Obviously I know what she has been doing, I have her record.  She raced 52 races, all around the country, and retired sound.  Though since she is a War Horse she changed hands a few times in her career and has raced all over the eastern part of the country.  From what I can tell, though race barns all generally work the same, they can also be very different from one another.  For example, I have a pretty strong suspicion that B was handled less than nicely at some point because she was SO flighty when I first started working with her.

She's a mare's mare and she knows what she likes.  This includes quiet time.  She prefers to be groomed and loved on quietly.  She's not spooky at all, she just gets annoyed.  She still keeps up the tough mare persona and that is fine because when it's just us she will softly nicker to me and falls asleep while I groom her and put my head on her forehead. 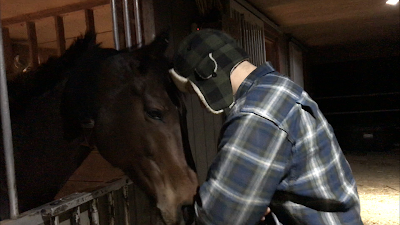 She is warming up to her dad more and more.

Here she is humoring Wes yesterday, which I am surprised she did.  I would have expected a "Knock it off already" mare glare, instead she just walks away when she's had enough.


Just simply moving around her, quietly, in a stall, and she would flinch and get up against the wall like she was expecting to be hit, despite arriving to my friend's farm and being let down for a few months with not much handling.  Things like that kind of drive me insane because I want to know what happened, but that is also one of those questions you probably really DON'T want to know the answer to.  Also because of that I don't even correct her like I would with my other horses if she does something that needs to be corrected.  I just ignore whatever it is she does (mostly mare glares and sometimes threatens to nip) and tell her things like "Heyyyy I don't do that to you, don't do it to me ok?"  or " No need" or "Um, inappropriate" in a calm voice and point at her, and she responds to it.  Normally, that would warrant a corrective smack from me, but if you were to smack her for doing something like that it would break the trust she's built up with me.  It would be sensory overload for her.  Honestly, I think she'd be confused and feel disrespected (even though yes, that behavior is disrespectful toward me) because she just doesn't need that kind of correction.  Her last trainer was banned earlier this year for a couple months for unauthorized injectables being found in his barn.  He also has negative press out there for running horses too often.  There are a few times in B's record where she would race every week or every other week.

Over the past 10 months she has relaxed overall and she doesn't get up against the wall like she is going to be hit. She is much more calm about a lot of things.  She also has always seemed like she was conflicted about people.  Like she wants to trust people, but so many of them have proven themselves to be aholes that she's not sure she is convinced there are any genuinely good ones.  That is going away as well.  I have had to prove myself to her over the past 10 months and show her I'm there for HER and that she has her very own person now, not a parade of them.  She likes having a person.

I got her knowing that it would take me most likely a year to get her straightened out and to make an established baseline for her overall health through vet appointments.  For example, my vet was having a Gastroscopy Clinic, so I signed her up.  Did I think she had ulcers?  No.  I know she was treated for them earlier in the year, and I have been taking preventative measures since she is an ulcer prone type of horse.  But why not take advantage of the clinic and have them take a look at her?  The only way to really know would be to have her scoped. 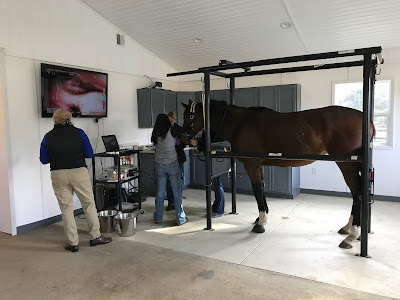 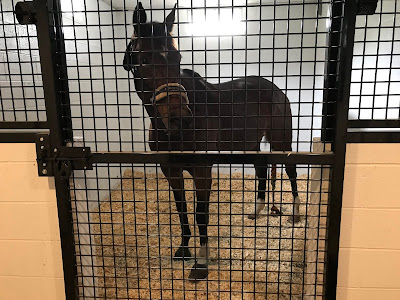 Her feet obviously needed some help, and that isn't something that happens in a month.  She has had chiro adjustments after she told me she needed them sooner rather than later.  She kicked out under saddle one day when I asked her to canter not long after I restarted her.  That wasn't her normal in the short time I had known her at that point, so she was adjusted and hasn't done it again.  She is a horse you have to listen to.  She doesn't do things like that to be obnoxious or rude, she does things like that because she is asking for something she needs.  I promised her I will always listen.

She's a roarer, but that just wasn't enough to make me turn away from her.  Should it ever bother her, we'll get it fixed.  Clearly, she's green as far as being a normal riding horse goes.  She has her own quirks.  I had to figure out her preferences as far as things like bits, etc...  Sometimes she likes to launch like she's coming out of the starting gate.  I have figured out a pattern to that though and that's going away now too.  You just have to keep in mind this is not a horse that came off the track at 3 or 4.  She raced until she was 7 years old.  That's A LOT of training and behavior patterns to undo.  I just have always had the mindset that I will let her tell me when she is ready to learn the next thing we are going to work on.  It helps that she is incredibly smart and learns things easily. 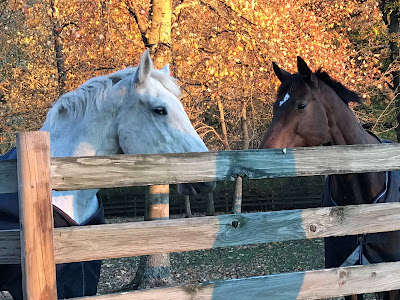 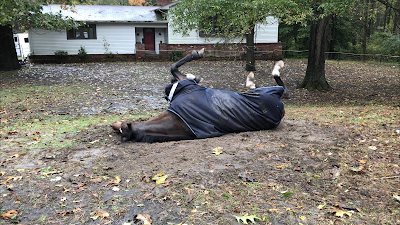 Rolling in her favorite sandy spot.

So, she's a project for a few reasons aka my Fixer Upper.  I'm having fun showing her what it means to be a family member and the world beyond the track.  I can't wait until I get her fully rebuilt.  The weather and the monster abscess have set us back here, we had a set back earlier this year when she went feral for a few weeks and refused to be caught, which meant no work during that time. 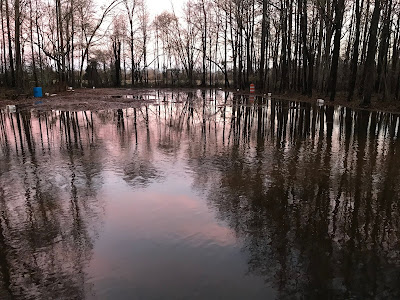 Seriously, the weather here sucks and has been a massive and depressing obstacle this year. 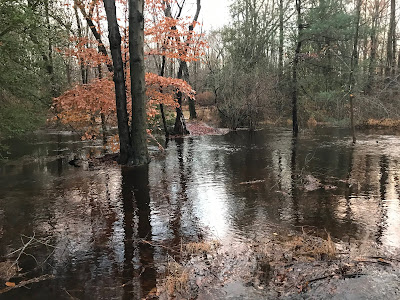 Part of our backyard is under this.  If you look close in the center of the picture you can see one of our bridges.

Once we head out on our next big adventure she will be back to work.  I will increase her workload gradually and document it here so you can see her progress.  She's looking pretty good at this point as far as soundness from the monster abscess.  It's healing nicely and she's feeling 1,000% better.  I cannot wait to get her back to REAL work.  I'm not even exaggerating when I say I'm having serious withdrawals from riding her.  Here's what we did in four months... 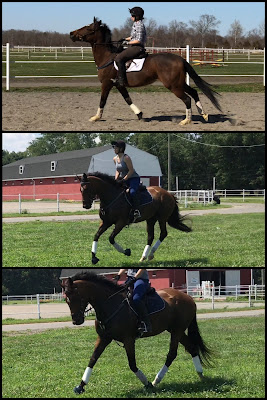 Just wait and see what happens in the coming year.
Posted by The Jumping Percheron at 7:27 PM