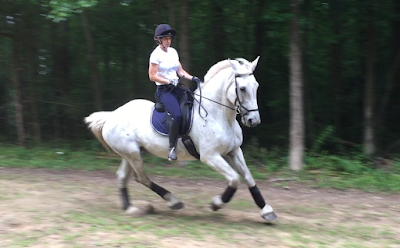 Klein's dressage has continued to improve lately.  I credit my dressage instructor in Georgia teaching me over the past year to ride with my body on a new level and also our eye-opening dressage lesson with Lainey Ashker in April.  Klein is just overall carrying herself better and really rocking back and re-balancing on outside rein half halts.

We have continued to work on our flying changes.  Gradually they have sunk in more and more and made sense to her.  Now she is to the point where they make sense to her and I can ask for them randomly with out having to really set her up for them.  She also isn't making them into a big deal like she did for a while where she would change and kind of launch out of them.  She'll settle down after them, though they still can be, um, expressive.  See below... 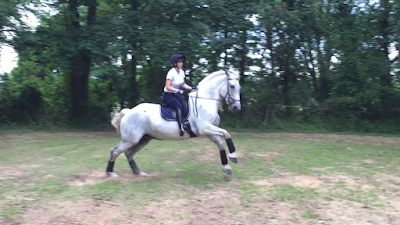 This ride in particular she started out really distracted, which is unusual for her.  I thought there was something in the woods that she must have heard because every time we were at a certain point in the ring her attention would be on one area.  We have all kinds of animals living on the property. 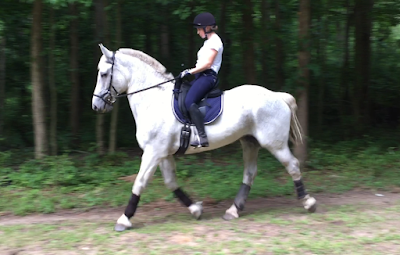 Super distracted by something.  Not spooky, just couldn't concentrate at first.  Uh, Earth to Klein. 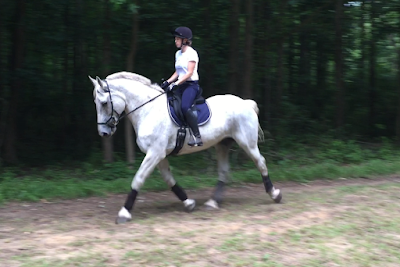 I walked her down the trail and sure enough, there was Deer Family.  They went scattering but she saw them.  That's what she heard.  She's not scared by them, she just heard them and didn't know who it was back there.  After she saw them, we went back into the ring and I had her full attention. 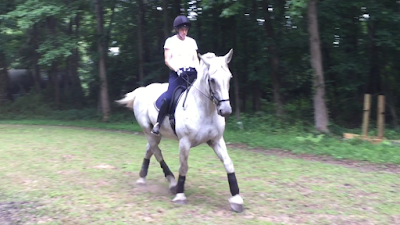 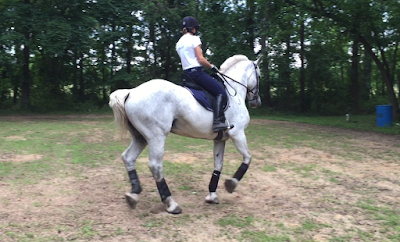 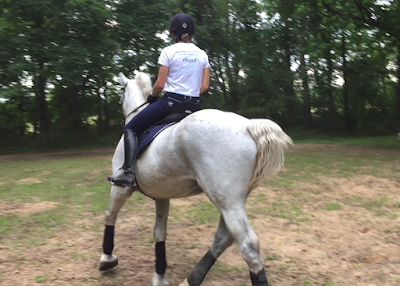 She settled and we were able to work.  This ride also had a new accomplishment in it.  Her Kimberwicke was on her bridle so I had to change it before putting her bridle on.  I saw her loose ring french link snaffle and thought "Hey we haven't ridden in this in a year, let's just see what happens."  I put it on her bridle instead of her Boucher, her normal dressage bit.

She has always just been heavy in the snaffle.  Well, there was a time when she was basically unrideable in it, she just wasn't refined enough for it.  She would flip me the bird and run through it like a freight train.  Over the years that has changed and she has gotten better and better in it gradually, but we never have ridden in it regularly because she has always really liked her Boucher.

This ride was no different than the Boucher.  I completely forgot she even had the french link loose ring in her mouth until after the ride.  So, we have flying changes and are able to have a normal ride in a french link loose ring snaffle...  I feel like we have climbed a mountain with these two things.  It's been hard to teach a big horse flying changes, but I did it, by myself.  It was hard not only to teach her the aids for them because she had no idea what I wanted at first, because she didn't know what flying changes were, but to help her understand she was capable of those changes under saddle.  Thankfully she's a very, very smart mare.  It's also been a long road for her to listen to the loose ring like it's no different than a Boucher.  These have been challenges for us, and we have accomplished them together between just the two of us.
Posted by The Jumping Percheron at 7:48 AM