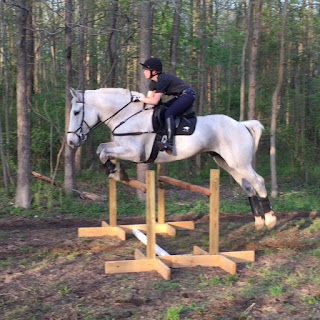 This jump school happened about two weeks ago, but I did want to post some video from it.  I have been a little behind on my posts lately because of school, mostly.  I do my school work in the evening and a class I just finished was a bigger workload than normal.  So by the time I get done riding, feeding, and doing my homework, there's not a ton of time for extra writing, if I want any quality sleep before I get up at 4:45am to head to the gym.  Thankfully, that class is over, I managed a final grade of 99.5% and my next class I started this past week is significantly less work, and happens to be about a subject that I'm extremely knowledgeable on due to my job.  What I'm saying is, more time for extra writing.

I had set up a line of bounces for Klein and a two stride to a one stride line that I rode both ways.  That line was made up of two verticals and an oxer.  Klein nailed everything.  I also set up a skinny that was a blue barrel with standards on each side.

Klein through the two to one stride line. The verticals are 3'3" and the oxer at the end is 3'6". #Klein #mare #percheron #shesnotaclydesdale #drafthorse #horsesofinstagram #riding #equestrian #jumping #schooling #eventer #eventing #stadium #hearthorse #horseofalifetime #equineathlete #bamf #oghorse #maresrock #jumpingpercheron #blog
A video posted by Stacey C (@jumpingpercheron) on Apr 26, 2016 at 7:52am PDT


The skinny had her attention because I think at first she thought the skinny might have been a little TOO skinny for her to fit between, but I kept my leg on her and she got the message that we weren't going anywhere by over.  That is why in the picture with the skinny she's a little twisted in the air!  She needed that little reassurance, and I gave it to her.  That is an example of the teamwork I keep bringing up lately, as far as me being there for her.  The next couple times over it were non-dramatic. 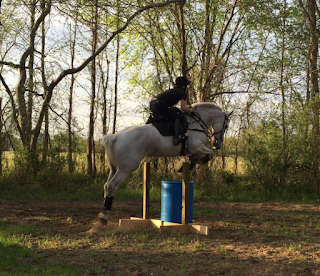 I submitted the first picture to Judge My Ride.  Here's what Grand Prix legend Robert Gage had to say: 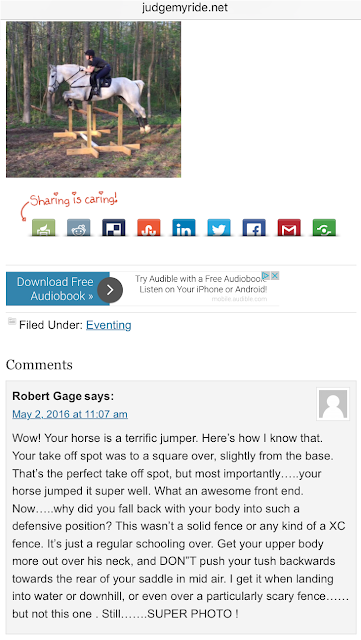 Posted by The Jumping Percheron at 10:18 PM