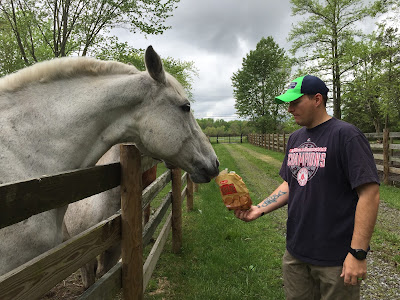 The Other Half brought this on himself.  He grabbed them a bag of apple ginger snaps at the store one day.


We're in our first spring at our little farm.  It is a beautiful property, and it the past couple weeks it has become even more beautiful with everything coming into full bloom. 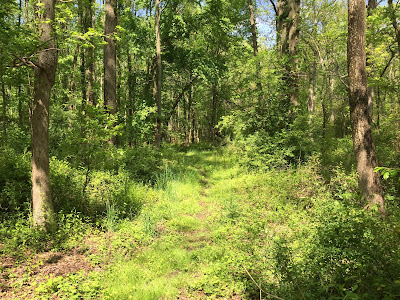 Part of the trail that goes around our property.  Sooo pretty! 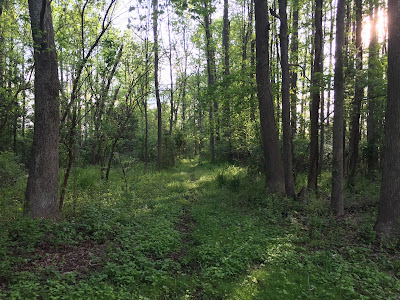 Another part of the trail.

Our place is also like watching Animal Planet live every day.  It's pretty awesome.  We have wild turkeys that we see daily.  Sometimes when I come out in the morning I hear them gobbling in the woods.  We also have a deer family that I see almost every single evening either in the arena, or by the muck pile.  We have a resident hawk that we actually saw flying around over one of the pastures with a snake in his talons the other day.  There's a possum that hangs out in the one pasture at night sometimes.  And now, just this week we have a new resident that has made an appearance every single night, a raccoon. 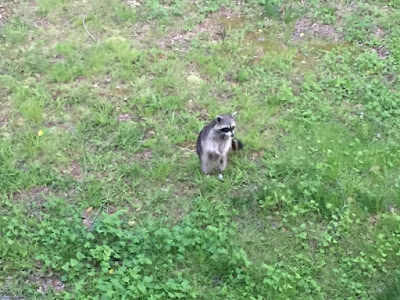 There are two other raccoons that have come to the yard with him but we haven't seen them since.  But this guy comes to visit every evening and in addition to putting cracked corn out for him, The Other Half throws him pretzels and bagels from the front window.

I love all of our wildlife.  They don't bother anything.  We did have one big tom turkey that was attacking his reflection in one of the basement windows.  Stuff like that won't be tolerated but he hasn't done it since.  I really thought he might crack the window.  Not cool.

The Other Half recently put up a temporary paddock that is fenced with electro-braid.  They all know very well what electric fence is, and they respect it.  This paddock is also something they will only be in when we are home.  It just gives them another area to graze and gets The Other Half out of mowing for a few days.  He came up with this idea on his own and after getting the supplies had it up really quick one evening.  Klein and I were jumping and before we were done it was up and Mochs and Wes were in it. 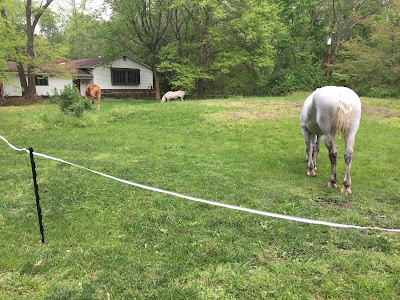 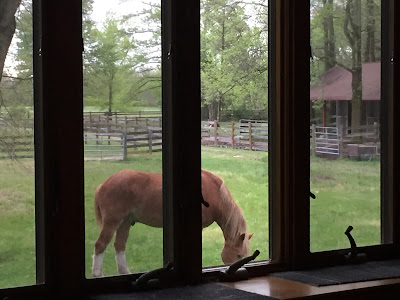 How awesome is it that I took this from sitting on our couch in the living room?

The ponies approve!  Especially Mochs since that gave her access to the BIRD feeder, which she promptly renamed the PONY feeder. 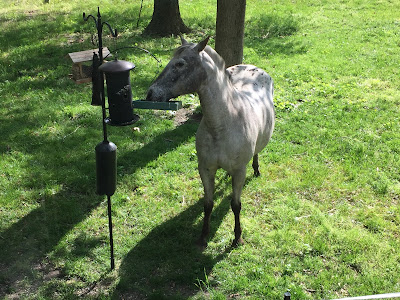 I KNEW that if any of them messed with the bird feeder, it would be her.  She got into the plat form feeder and tried to go for the suet cakes but couldn't get them out.  I watched her and despite me opening the window to yell at her she completely ignored me and went about helping herself.  We will just run the fence in front of the bird feeder so that doesn't happen again.  It was worth a try!

There is this dirt patch on the top of the small hill that they each take turns rolling in too. 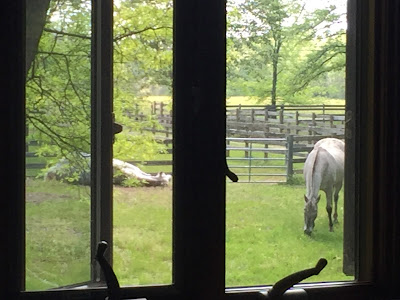 Klein rolling in their favorite spot. 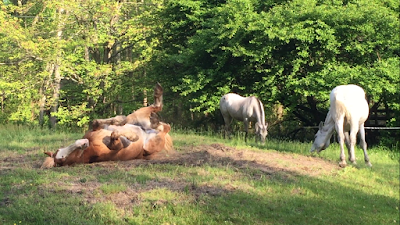 I'm out of town for work until next week so The Other Half is holding down the fort and doing a great job like he always does.  He even has the ponies walking obediently from their temporary paddock into their stalls for dinner, which is surprising.  Normally Moch would take off like a wild thing but she's been a model citizen.  Her trot is looking better these days too.  I am going to take a really close look at her on the longe line after they are trimmed next week. 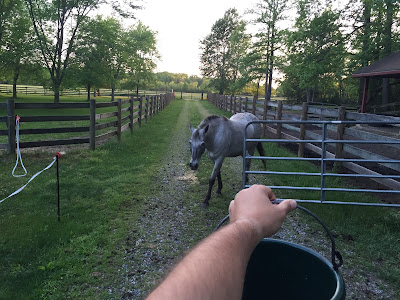 The Other Half proving that Mochs is behaving!  The ponies have also Facetimed me while they ate dinner one evening this week too.
Posted by The Jumping Percheron at 11:32 PM