You Have to Pay To Play 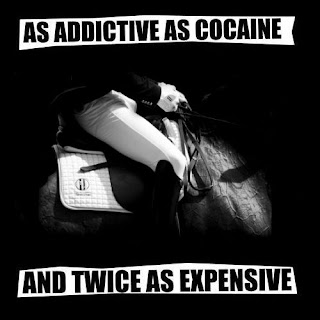 It's a widely known fact that horses are addictive as cocaine and twice as expensive, yet worth every last fraction of a penny.  It's also a widely known fact that "horses" goes way beyond the actual animal.  All the upkeep, vet, chiro, equipment, shows, clinics, etc, etc, etc, the list could go on forever.  Let us focus on one VERY important aspect of horse ownership:  trailers.  I love my trailer.  I really do. It is exactly the one I wanted.  I didn't settle for anything less than the exact model I wanted. 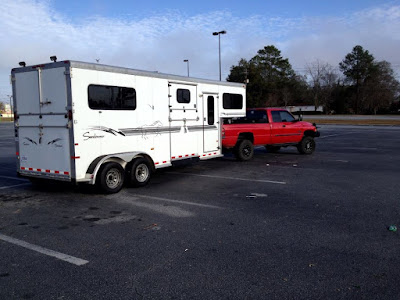 It's been great, up until these past two months.  My trailer has been kicking my ass lately.  It started with the wiring.  I took it in to have the bearings packed (regular maintenance) and a new brake controller put in my truck.  While it was there they found a legit wiring mess.  It was also time for new brakes on the trailer.  $1,217 later, it was ready to rock.  Then we had the blow out on our way up here with a BRAND NEW tire.  That's right.  Last May I put four new tires on the trailer and bought two spares, that's over $1,000 in tires.  That blow out took with it a grease cap on one of my axles, bent my fender and ripped a light off the fender. 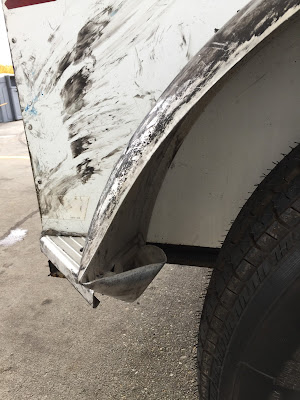 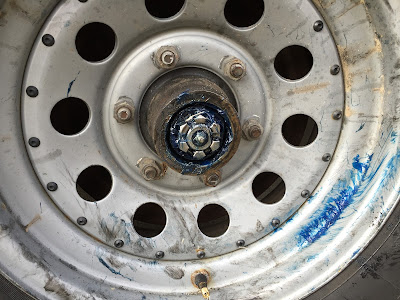 Missing grease cap on one axle that the blow out ripped off.

I'm not super concerned with the bent fender because that in no way inhibits how the trailer pulls.

My jack had been giving me trouble lately and actually got stuck the day I was taking Wes on base to meet Brook Ledge.  My barn owner's husband helped me that day and we greased the hell out of the jack.  It made it a little better but I had a pretty good idea the jack was most likely on its way out.  The night we were raising the trailer off the truck something in the jack finally gave.  Something snapped and the trailer fell back down on the truck.  Well thankfully the damn truck was under it and it didn't do that with no truck under in and fall on the ground!!  It just fell about 6" back down onto my hitch.

The Other Half came to the rescue with a 20 ton bottle jack.  We put two six ton jack stands under it just in case the bottle jack failed.  A ratchet strap was used to keep the jack up, otherwise it would be all the way extended.  The handle was spinning freely at that point. 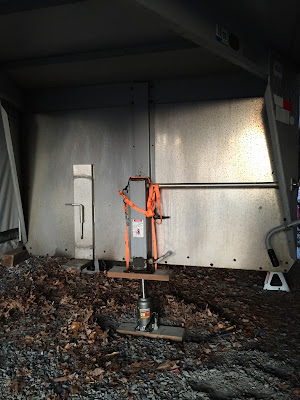 Ghetto fabulous.  I know...I know, all we need is for it to be resting on some cinder blocks.  But really, I didn't want it sitting there using my truck as a kickstand either.  But really, the jack looks small but it's 20 tons.  It didn't budge an inch either.

Ok, fine.  Jacks are consumable parts, things that break.  There's a reason they are readily available in trailer parts stores.  So, I found a HUGE trailer dealership 45 mins from our house and ordered a jack.  The jack came in and I had an appointment last Saturday for it to be installed.

Oh wait, I forgot something else.  Also on the way up here we are about to cross into Delaware and I hear "Something just flew off the top of your trailer.  It kind of looked like ice?" on the walkie talkie.  Pretty sure that was my vent lid.  My barn owner in GA sucked at keeping the trees trimmed and coming in the drive way branches would brush the top and they cracked my vent lid.  I guess all the wind caught it and ripped it off.  Annoying, but, whatever.  That's a $30 part.  Plus, the trailer is parked under a portable garage.  Those things are also readily available and I knew the trailer dealer would have them in stock.

Last Saturday rolls around, I take my trailer to the dealer, they put the new jack on and install the vent lid. 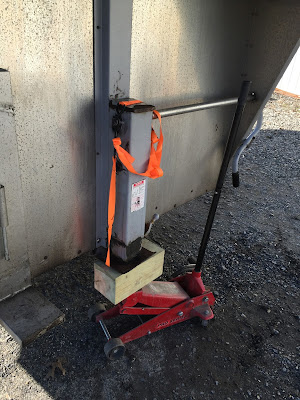 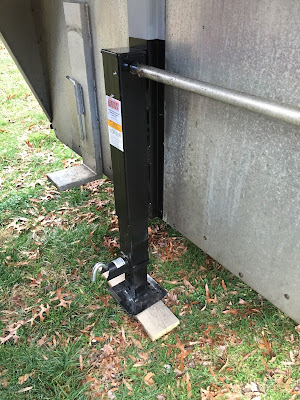 Yesss!!!  Like butter, so easy I can put it on and off the truck with one hand.  No more jumping with my whole body weight on the jack handle and it moving maybe 2". 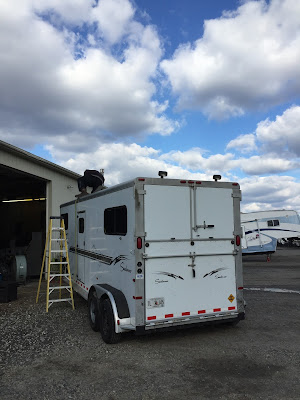 Putting the new vent in. 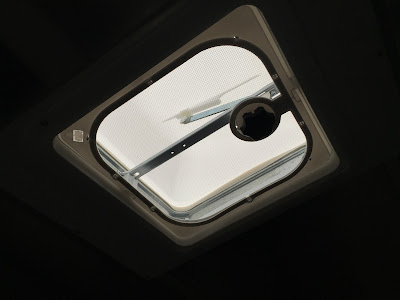 New vent lid.  It's the little things...like not being able to see the sky anymore.

Total for last Saturday's work?  $537, thanks to The Other Half.  No seriously, they said $537 and he immediately got his debit card out.  They also pointed out I might really want to think about having my roof seal redone like...soon.  They were right, that's not them trying to upsell me bullshit I don't need, I knew about the roof seal.  My roof seal is pretty much done.  Quote for that?  $450, and we can't do it until it is a little warmer out.  So I'll take it back for that in spring.  I'd do it sooner if it wasn't sitting under the portable garage, out of the elements.  They said if I needed it soon they would just pull the trailer in the shop and warm it up to the temp they needed for the sealant to cure.

So, trailer, good to go again.  They also had a grease cap for that axle laying around so they put one on there.  Fast forward to tonight.  I'm pulling my trailer into the portable garage (that I have done multiple times since we've been here) and a broken bar in it that we had moved out of the way came back down as I was pulling in.  I heard a loud pop.  Fml.  I stopped and backed the trailer out a little bit.  The Other Half climbed up on the truck bed and said "It punched a f'ing hole in the trailer!!!"  Excuse me? 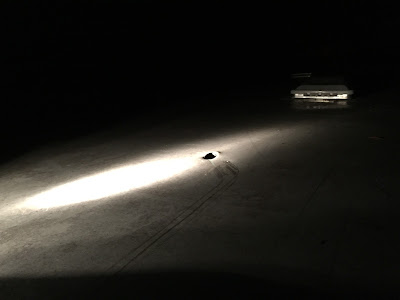 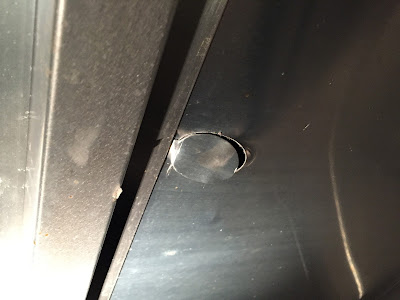 Ummm, nope, definitely not f'ing kidding me.  Just punched a hole in the top of my $12k trailer, nbd.  Well, that's nothing a welder can't fix.

That should be about a 10 min fix for a welder.  You better believe he broke that bar off so there's no way that can happen again.  Having the freedom that comes with your own trailer is priceless, but still, ENOUGH TRAILER. WE'RE DONE NOW.  Do you WANT to be traded in and replaced by a newer Sundowner Charter SE 2+1????  Because the trailer dealer has plenty of them in stock and we took a close look at them last Saturday and they looked REALLY GOOD. 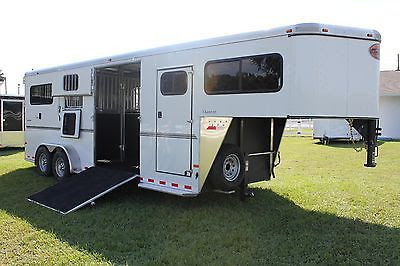 This welding job will be a cheap fix but still, over $1,800 in maintenance in the past two months is plenty. 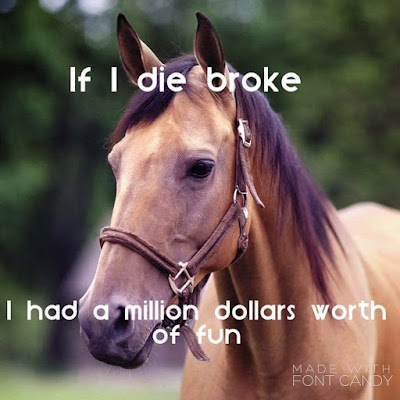 Posted by The Jumping Percheron at 10:28 PM