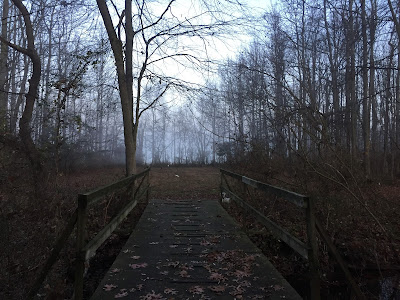 The weather has been pretty perfect here lately.  Wes wasn't feelin' it today because it reached about 71 and that's too hot for a polar bear.  Poor guy has been sweaty the past couple days.  At least it hasn't interrupted any of his usual routine. 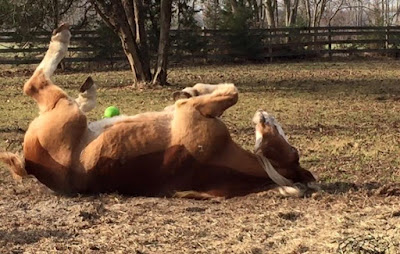 His usual morning roll.  He grunts every time he rolls and it's hilarious, he seriously enjoys himself.  But you know, that's what you do when you're retired and living it up doing whatever you want, you enjoy yourself! 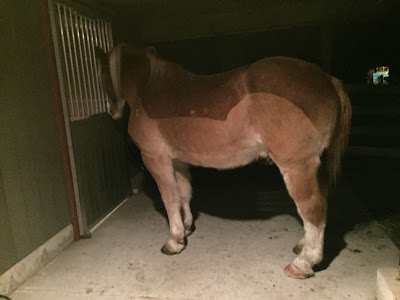 He also has figured out where the grain comes from.  Here he is insisting he can help me make dinner. 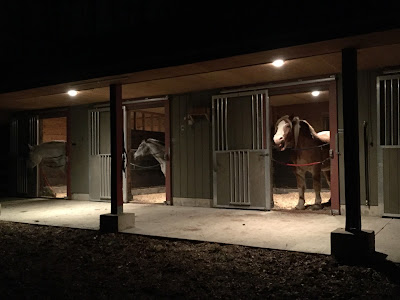 And more yawns after dinner.  He loves his Himalayan salt lick in his stall too.  He will eat dinner, lick his salt block, yawn, then be ready to go back out, get a drink then lumber off out in the pasture, and maybe stop at the hay net on his way.  It's good to be king.

I actually saw him hold his ground against Klein this morning.  That is the first time I've ever seen him stand up to her even in the slightest way.  She is the fun police and the fun police is on duty 24/7.  He was minding his own business, drinking out of the stock tank when Klein decided (as she regularly does) that SHE wanted to drink from the stock tank in the exact spot he was.  She squealed and swung a hip at him and he swung his hip right back at her and they bumped each other.  The Other Half was out there with me and told Klein to knock it off, so I didn't get to see who would have won.  I'm pretty sure it would have been Klein because I doubt Wes would stand his ground beyond that, but that was more than I've ever seen him do.  Good for him.  The fun police can't ration water.  Luckily everyone has a automatic waterer in their stalls too.  The fun police can't be in two places at once.

Speaking of the fun police...  Klein and I went out exploring some more yesterday and found more area for hacking and conditioning.  We had some nice gallops.  Klein was enjoying herself.  She also did the first auto change she has ever done.  She did it while we were galloping.  This once a week schooling changes stuff is sinking in with her. 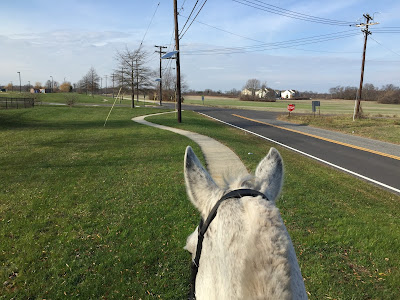 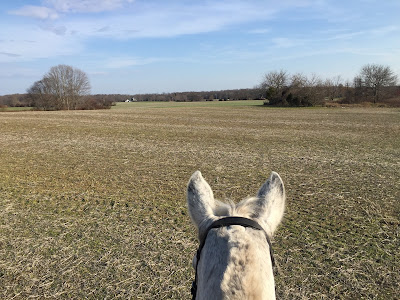 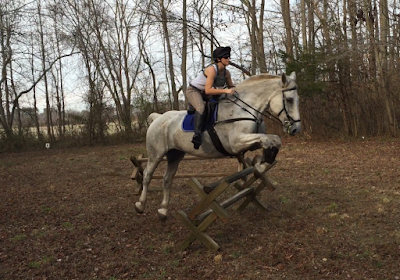 I had also stacked some cavalettis so we would have SOMETHING to jump.  They're small but they're better than nothing.  The Other Half is going to build me some jumps soon.  Plus, there are barns super close to school at until my collection is built up.  I do have some other stuff I can jump, I just need to set it up. 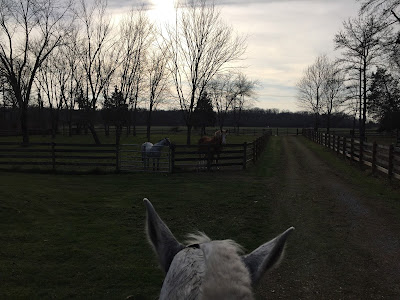 Waiting for their Klein mare.

Today was our day to school changes.  Lainey posted another great dressage exercise of the day that involved changes so I thought we might as well give it a try.

Heads up! Another #DEOTD for my more advanced level horse and rider combos! Counter canter into four cavalettis (slightly less than nine feet apart depending on your horse's level of collection) and stay straight into a flying change and then counter canter and repeat the exercise. ***If your horse doesn't know his changes yet you can modify with a simple change through the walk. This exercise teaches the horse collection and straightness through the poles and the flying or simple change and it promotes a balanced rider who is capable of maintaining a counter canter through the turns on the approach of the cavalettis. Huge thank you to long time student Jessie Clise on Bucky for demonstrating today's dressage exercise in her lesson! Enjoy guys! #crosstraining101 #dressageisfun #winterworkouts
A video posted by Lainey Ashker (@laineyea) on Dec 11, 2015 at 11:20am PST 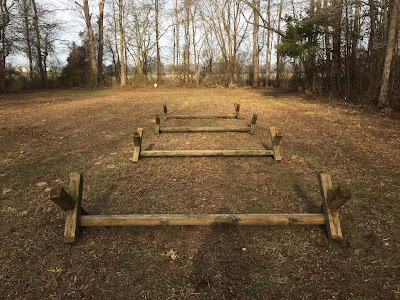 Klein has a strong counter canter.  She can counter canter tight serpentines all day long.  We warmed up and then worked on a couple changes by themselves over a pole.  Then we cantered over the cavalettis and added some counter canter.  After we had that together we added the change.  She was changing a little late behind but she is getting it.  Even changing from right to left, which is her more difficult side.  One of the times she was late behind changing to the left I made sure to sit down on my right seat bone, gave her an opening left rein and a tap with the whip when I asked and she got it.

After my ride today I headed over to a barn 10 mins from home to meet up with a friend and audit the Sally Cousins clinic going on there.  If I would have known about it before yesterday I would have taken Klein.  But Sally goes there on a regular basis, so we will catch her next time.  That's right...Sally Cousins...10 mins from my house.  What?  In GA to take a lesson it was a minimum of a 70 mile haul, which was fine because good lessons are worth it, but.......Sally Cousins is 10 mins one way, and Lainey Ashker clinics are 15 mins the other way.  I already don't ever want to leave here! 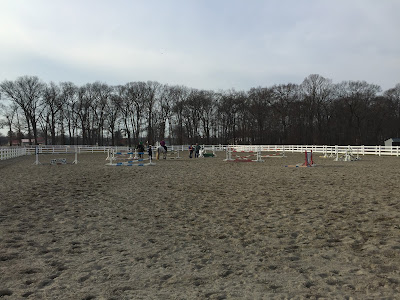 Auditing the clinic.
Posted by The Jumping Percheron at 10:20 PM