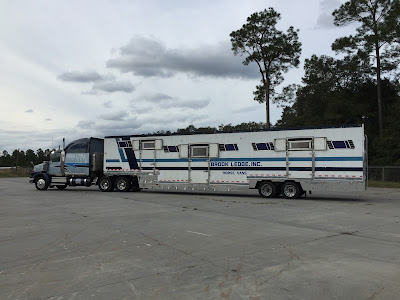 This is becoming a very familiar sight.

Brook Ledge and all of their awesomeness strikes again!  Wes' ready date was 16 November.  At about 8am on the 17th they called me to say the truck was leaving Ocala at 11 and they would see me between 2-3pm.  The driver would give me a call when they were an hour out.  Cue mild heart attack because reality immediately set in that my boy was leaving in a matter of six hours.

Dispatch asked me where we were going to meet up because they were looking on Google maps and noticed there was just no way a tractor trailer could get down the road the barn is on.  It is a single lane dirt road that doesn't go all the way through.  Not a good idea, and that would be extremely rude of anyone to ask them to try to do it.  I talked with Brian as we both looked at Google maps together over the phone.  I suggested the spot I had in mind and he said he'd like to get them into a better area still.  We are not in an area with a lot of open parking lots so I suggested we just have them come on base because it was only about 10 mins away.  They liked that idea.  I found them a big empty parking lot on a quiet road.  At first we were going to meet in the commissary (grocery store on base) parking lot but I didn't want a crowd of people gathering around.  I found the perfect spot and told him to tell the guys to just come to the main gate on the base and we would sponsor them on.

I went to get Wes and he already started breaking my heart by looking intently at the girls before he loaded.  He loves his girls.  I felt terrible for asking him to leave them.  I promised him he would be going on a little vacation and make some new friends.  I promised we would have a happy reunion in a couple weeks. 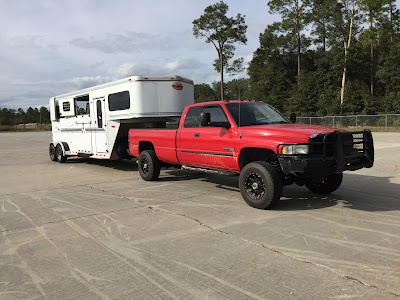 Waiting for The Other Half to sponsor Brook Ledge on base. 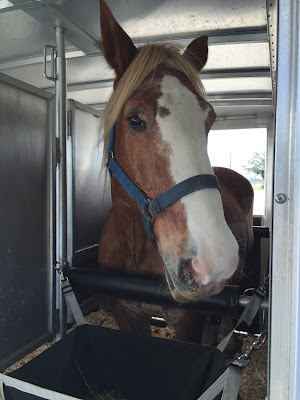 Being a good baby, waiting on his limo. 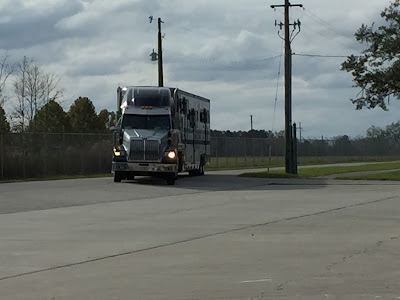 Cue tears.  As soon as it pulled up my eyes teared up and I had to tell myself the drivers don't want to deal with that, man up and don't let Wes clue in on me being upset.  He obviously already knew something was up. 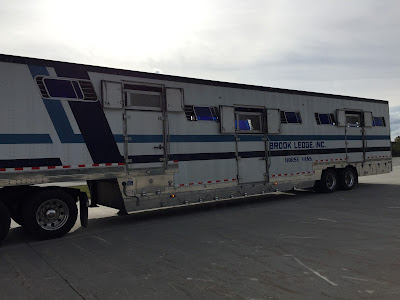 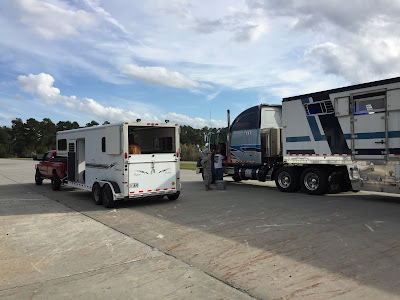 Their rig makes my truck and trailer look SO TINY!

These two drivers were a class act.  This is the third time shipping with Brook Ledge and they are nothing but outstanding every time.  These two were super quiet when handling Wes.  We weren't far from the flight line on base.  There was a C-130 doing a full engine run up before take off and it had Wes' attention.  They let him stop and listen to it and watch it take off before asking him to step on the ramp again.  They let him take his time and in less than 10 mins he was on.  They patted him and reassured him and just were some of the quietest handlers I've ever seen.  That is worth every last penny spent on shipping.  They also asked me if he had a shank when I unloaded him off my trailer.  I told them no he doesn't and that I have never felt he needed one.  I said I did happen to have one in my trailer and asked if they wanted it just in case.  They said no, they didn't need it either then.  How awesome is that?  I really appreciated that. 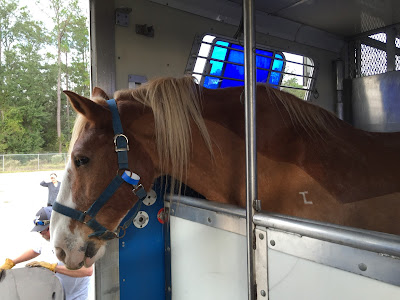 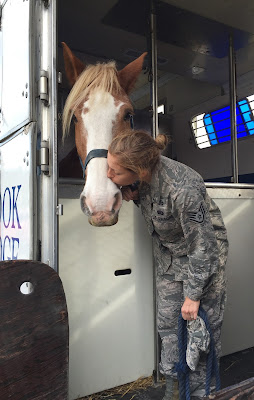 Kisses for my sweet, handsome boy. 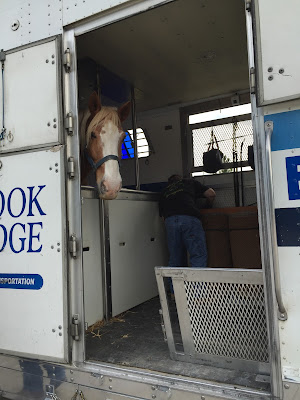 He was super interested in helping them close the trailer up.  That made me feel a little better too, seeing that he wasn't so distracted by looking for the girls that he was interacting with the drivers. 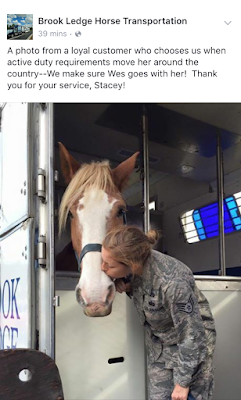 Brook Ledge shared our photo on their Facebook page the next day.

Wes was heading to their layover facility in Lexington that night.  He had the whole rig to himself too!  He had a layover at the Lexington facility on his way out to GA from UT too.  Last time he was stabled next to 2-3 million dollar horses.  Another reason why I love Brook Ledge so much.  They treated Wes no different than the high dollar horses.

I thought about him all night.  I had a dream about him, I woke up several times wondering where on the road he was.  First thing I did was call the Lexington barn in the morning to check on him.  The guy I talked to said he was there just hanging out, eating and drinking fine and would leave that night for the rest of his trip to New Jersey.

That night, same thing.  I had dreams about him and woke up several times thinking about him.  I left my phone on it's brightest, loudest setting in case they called in the middle of the night.  I told The Other Half that if my phone went off and for some reason I didn't hear it, he needed to wake me up right away.

My friend was doing the same thing!  I called Lexington again in the morning and they said he had left between 7-8 that night.  My friend had his stall all ready Wednesday night so it would be ready no matter what time they arrived.  They told me Tuesday he would be arriving in NJ Thursday morning.  They called my friend when they were an hour out.  He got there at about 11:30am.  He actually transferred off the big rig at their Oley, PA hub and had his own personal rig the rest of the way.  When the driver of that rig called my friend he said "he's a big boy!" 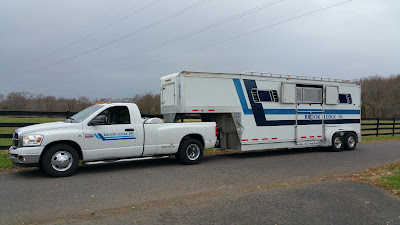 Wes' personal limo.  He had a box stall on this one as well.

When I got the first pic of him unloaded I could tell this trip was harder on him than his trip from UT to GA.  I think having to leave the girls was pretty hard for him.  He REALLY loves his mares and looks out for them.  He looked tired and slightly dehydrated.  Thankfully as soon as he was offered water he drank.  He also had a good roll. 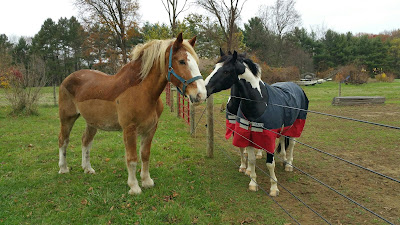 I got lots of pics and updates of how he was drinking and eating.  That was a relief.  He was eating, drinking, peeing, and pooping normally.  He just needed some rest. 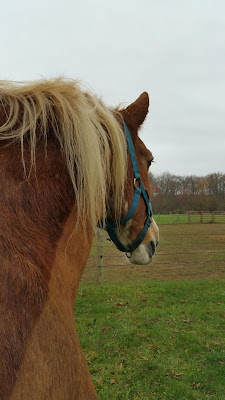 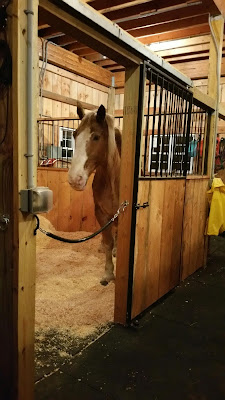 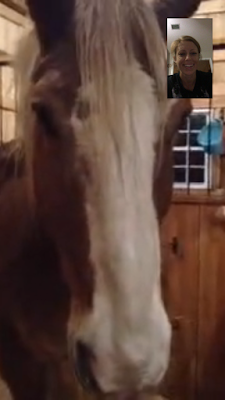 He even FaceTimed us his first night there! (Seriously, I know, best pony sitter ever, right?) 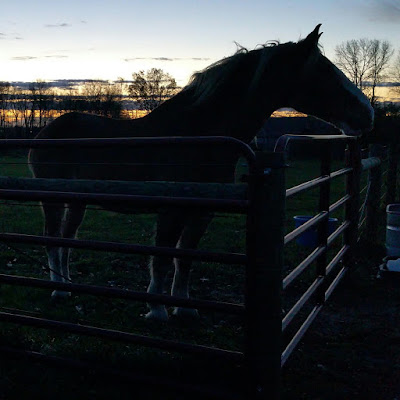 Finally enjoying some crisp weather instead of 81 degrees and 90% humidity in November. 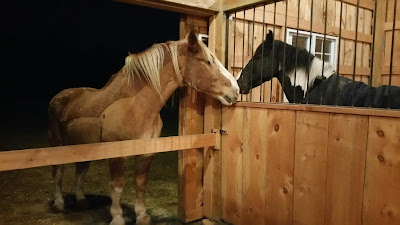 Hanging out with his new gelding buddies. 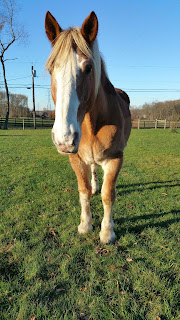 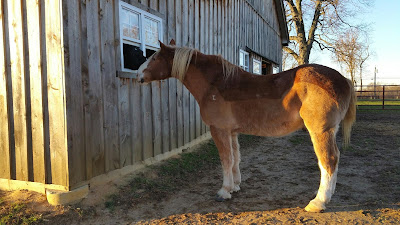 I love this picture, they are too adorable.  Wes is about the least threatening guy ever.  He just wants to be friends with everyone. 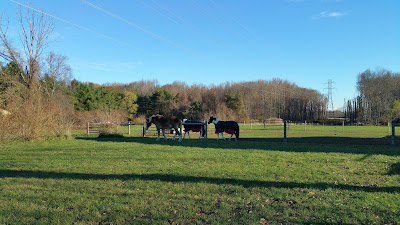 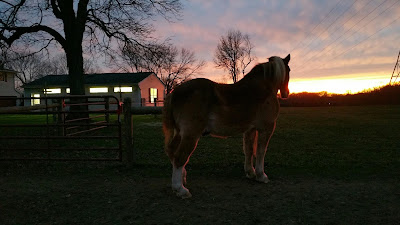 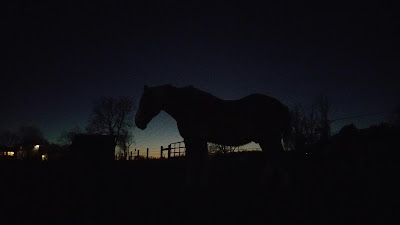 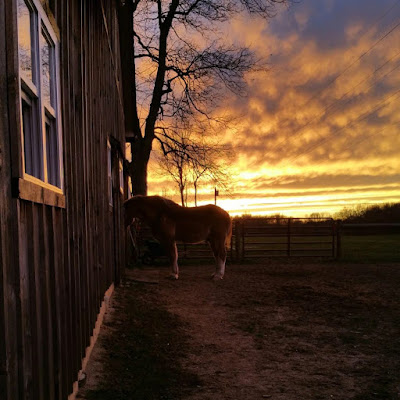 He looks great and has already learned the routine there.  He also makes his rounds of hanging out with his buddies then going and saying hi to the horses from across the road.  They stand at the fence and stare at each other for a while.  I think he is in the best place he could be while waiting for the rest of his family to make the trip up there.

The Other Half is in charge of getting video of the happy reunion between Wes and his girls!  As soon as I drop the girls off at home I am going right over to pick him up.  Speaking of, the girls are acting like he never left.  I know at least Mochi will whinny for him when she sees him, so at least that will make him feel like they really missed him.  Klein might speak up too.  Not much longer buddy!!!
Posted by The Jumping Percheron at 10:12 PM